Nvidia's Omniverse has officially turned into a content creation platform for virtual worlds on the consumer internet.
Jan 10th, 2022 6:00am by Richard MacManus 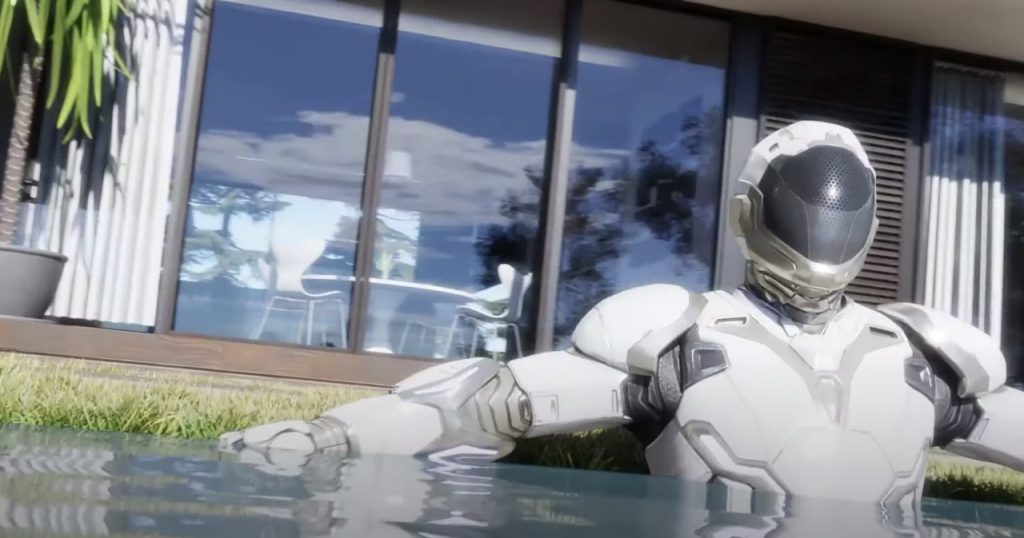 Lead image via a Nvidia promotional video.
TNS Annual Reader Survey
We need your input! Take 5 minutes to chime in and help guide our coverage.
Begin the survey

At last week’s CES, Nvidia announced that its metaverse platform Omniverse has come out of beta and will be available free to individuals. When I wrote about Omniverse last August, it was positioned as an enterprise tool to help design and manufacturing companies create “digital twins.” But when Facebook pivoted to the metaverse in late October (and changed its name to Meta), Nvidia quickly adjusted its pitch for Omniverse and hinted that it would soon become a consumer platform.

Well, now that’s a reality. Omniverse has officially turned into a content creation platform for virtual worlds on the consumer internet. Nvidia is welcoming “millions of individual creators and artists” onto its platform, to build for the next generation internet. (The enterprise use cases haven’t gone away, but they were very much in the background in this announcement.)

Nvidia has almost certainly pivoted Omniverse into a consumer platform based on the gravitational pull of Facebook’s earlier pivot, but that doesn’t mean Nvidia is fully buying into Meta’s vision of an interoperable set of competing virtual worlds. In a media pre-briefing, Richard Kerris, vice president of the Omniverse development platform at Nvidia, deliberately avoided using the word “metaverse” — the closest he got was coyly noting the buzz around “the M word.”

Perhaps Nvidia doesn’t want to cede naming rights to the next generation of the internet to Meta. Regardless, it’s clear that Nvidia is hitching its wagon to almost (more on that shortly) the same vision of a future web; one made up of an interoperable group of virtual worlds. But whereas Meta sees itself as one of those future virtual worlds — and it undoubtedly has ambitions to be the biggest — Nvidia is looking to be one of the main development platforms for virtual world creators.

There is a clear difference in philosophy between Nvidia and Meta in regards to how these upcoming virtual worlds will be built. In the CES announcement, Nvidia compared the emerging 3D universe to the World Wide Web — the primary open platform of the internet. This is a different approach to Meta, which views “the metaverse” as the next version of the mobile internet. It’s a subtle but important difference, because the mobile internet is not a single open platform; rather, it is a duopoly of iOS and Android (one of those is a proprietary platform, and the other is essentially controlled by Google).

“In much the same way the Internet gave way to the World Wide Web,” he said, “a connected, consistent environment with which people can build businesses, communicate, entertain, etc. — all because the underlying plumbing was made consistent through HTML — so is the same [thing], we believe, going to happen with these connected virtual worlds.” 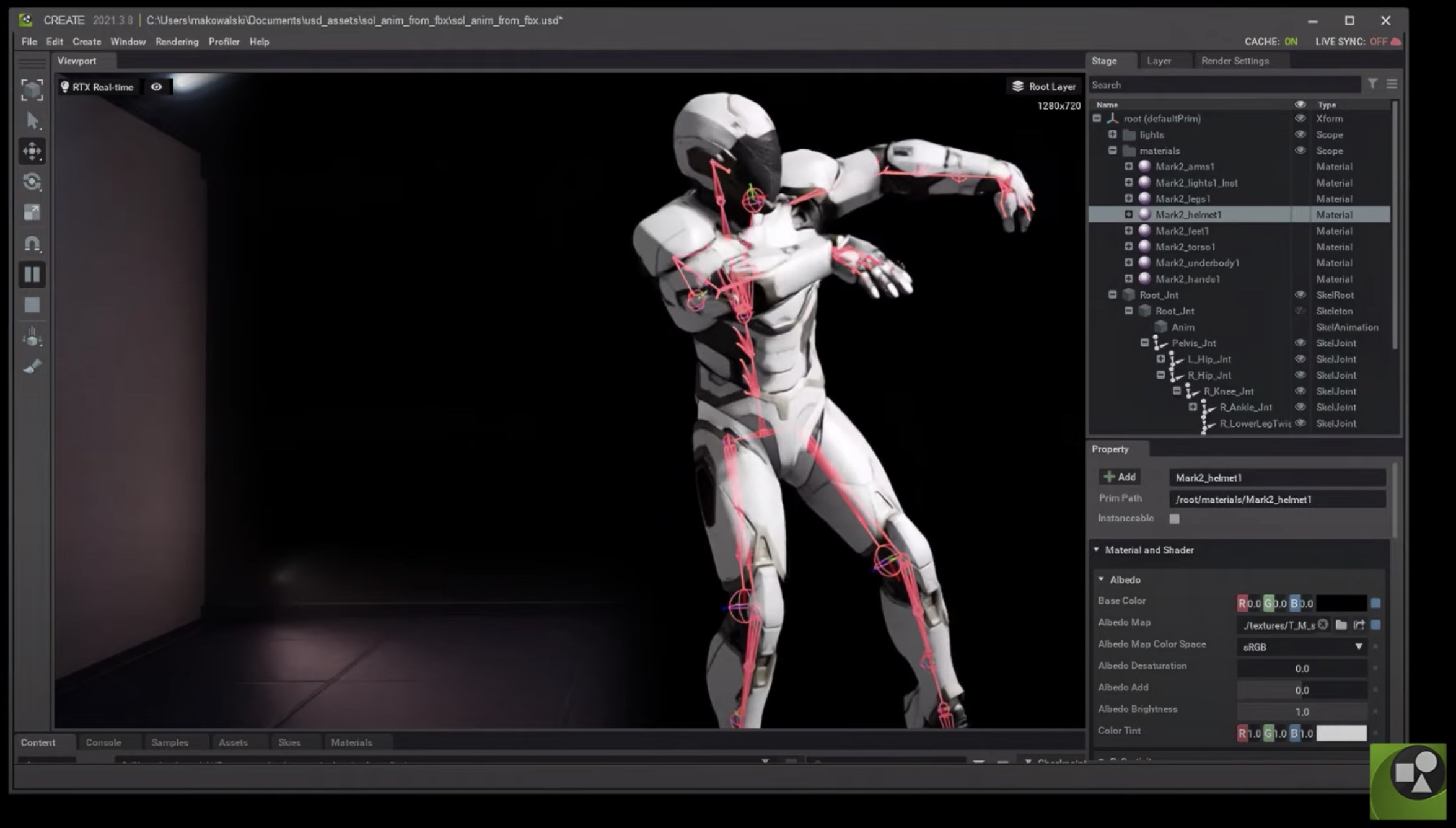 USD as the HTML of Virtual Worlds

In Nvidia’s view, a key part of virtual worlds will be USD. No I’m not referring to the US government currency. All of Omniverse is built on top of Pixar’s open source Universal Scene Description (USD), which Nvidia has pitched as the “HTML of 3D worlds.” In practical terms, the company describes USD as both a file format and “a powerful scene representation with an API.”

Part of the CES announcement was added third-party support for the Omniverse ecosystem, “provided by leading 3D marketplaces and digital asset libraries.” Examples include TurboSquid by Shutterstock, CGTrader, Sketchfab and Twinbru — all of which have released “thousands of Omniverse-ready assets for creators” based on the USD format.

The idea is that creators will be able to piece together 3D “scenes” with the help of assets from those external providers. Kerris compared this to how the music industry works, with sampling now a common practice in modern pop songs.

Kerris also explained that scanning scenes from the real world into the virtual world is becoming easier, thanks in large part to Apple adding in-built support for USD scanning into its latest devices.

“So we’ve seen lots of artists just use it [an Apple device] to scan environments,” he said, “create the USD, drop it into Omniverse and do things with it.”

He added that Nvidia will support a range of different 3D content creation tools.

“We’ve been working with just about […] all the major creative 3D tools — we’ve got Blender support now, there [are] other ones that are coming.” 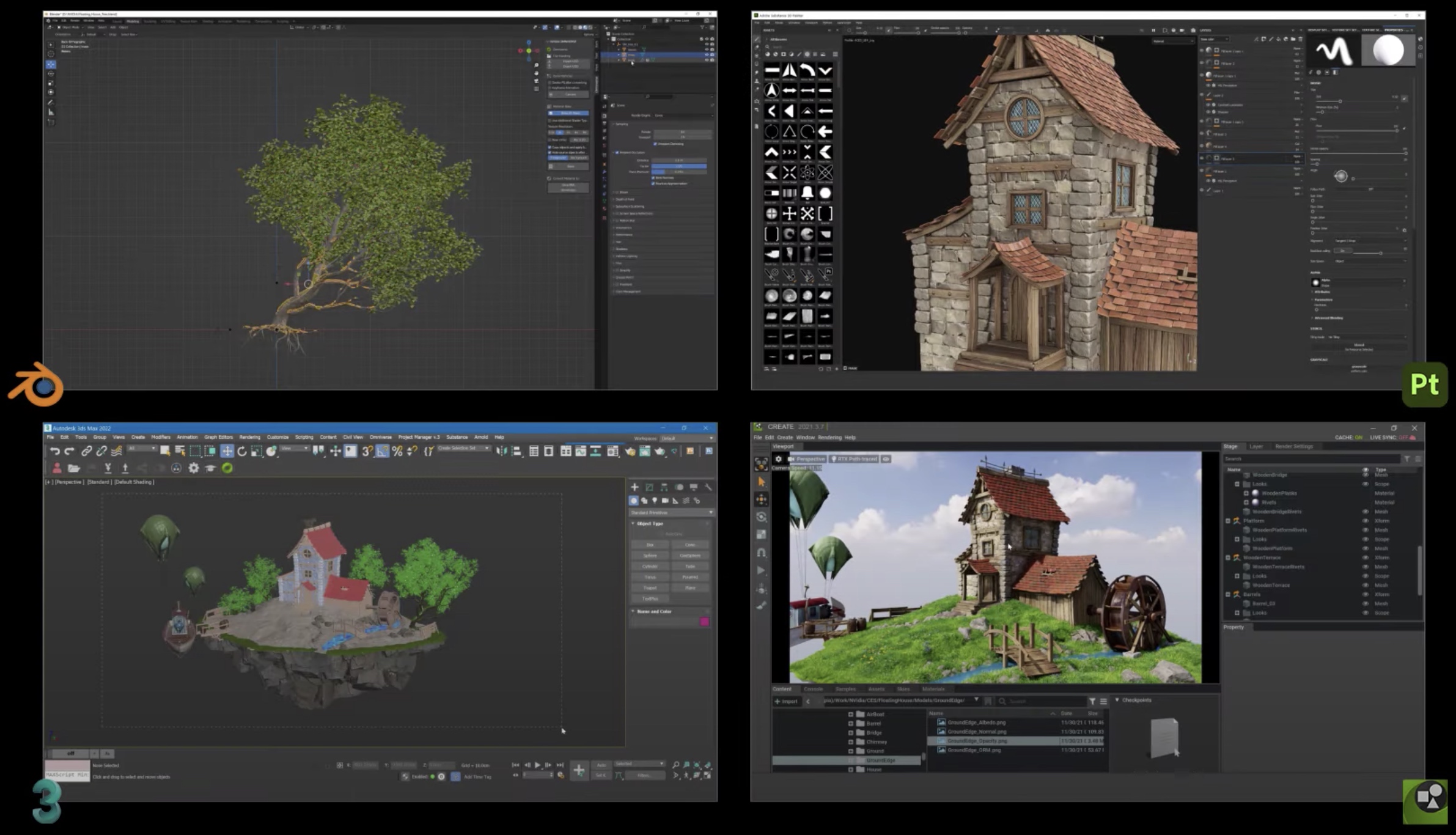 According to Kerris, based on its support for USD, Omniverse will serve as the “common foundation where all of these things [3D content] will be stored.” He thinks virtual world content will grow over time, “in much the same way the internet grew.”

It should be noted that not everyone in the virtual world industry is convinced that USD will be the 3D equivalent to HTML. In a report from The Register, Shawn Dunn, senior product manager at Epic Games, said that “USD has promise, but whether metaverse builds up a data footprint around the format has yet to be seen.” Another industry expert, Mohsen Rezaya from Siemens, said that USD needs to get a JavaScript library to become viable for web applications.

We’re in the very early days of virtual worlds, or “the metaverse” to use Meta’s lingo. We don’t even know what the virtual version of Facebook will look like, or how Meta plans to build it. Nvidia clearly has some work to do as well, to convince other companies to support its vision of USD as the HTML of virtual worlds. There are many other open platform choices yet to be made by the nascent metaverse industry.

With all that said, the opening up of Omniverse to individual creators is a smart pivot by Nvidia. If the web is ever going to morph into the metaverse, then people need tools to help them create content for it. With this announcement, Nvidia has nicely positioned itself as an early leader in the development ecosystem for virtual worlds.

Richard MacManus is a Senior Editor at The New Stack and writes about web and application development trends. Previously he founded ReadWriteWeb in 2003 and built it into one of the world’s most influential technology news sites. From the early...
Read more from Richard MacManus
SHARE THIS STORY
RELATED STORIES
Jamstack Panel: How the Edge Will Change Development How to Build Your Own Decentralized Twitter Twitter Turmoil: We Need an Open Protocol for Public Discourse Survey Finds Majority of Jamstack Community Testing Edge Augmented Reality Is the New Frontier — Time to Get Serious about Standards
SHARE THIS STORY
RELATED STORIES
Developers Get a Quick-Start to Coding with Replit IDE Software Developer Tool for Quantum Computers Launching Soon Twitter Turmoil: We Need an Open Protocol for Public Discourse The Latest Milestones on WebAssembly's Road to Maturity Kelsey Hightower on Software Minimalism and JS Frameworks
THE NEW STACK UPDATE A newsletter digest of the week’s most important stories & analyses.
The New stack does not sell your information or share it with unaffiliated third parties. By continuing, you agree to our Terms of Use and Privacy Policy.