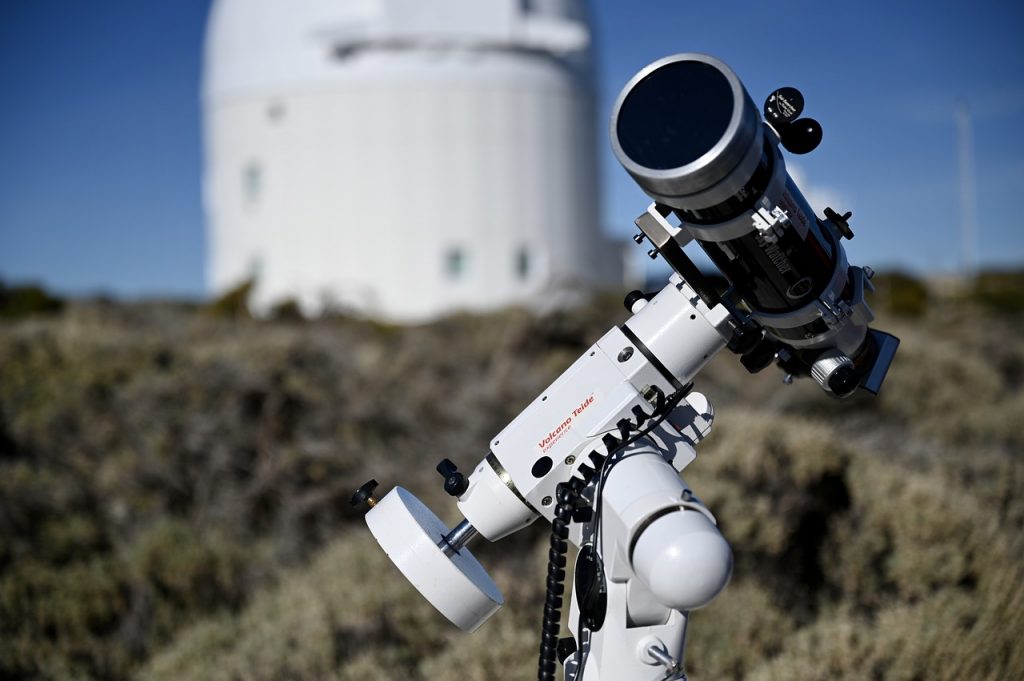 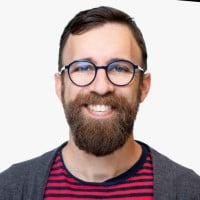 Ben Sigelman
Ben is CEO and co-founder of Lightstep.

I’m tired of hearing about metrics, logs and tracing as “the three pillars of Observability.” They’re hardly pillars — more like “pipes” — and they’re the telemetry, not the value.

But if Observability won’t replace monitoring, if “the three pillars” aren’t really pillars, and a single shiny datastore will never be sufficient, how should we model Observability?

I drew this up and posted it on Twitter a few weeks ago, and it struck a chord:

0/ I’m tired of hearing about observability replacing monitoring. It’s not going to, and that’s because it shouldn’t.

Observability will not _replace_ monitoring, it will _augment_ monitoring.

Here’s a thread about observability, and how monitoring can evolve to fit in: 👇 pic.twitter.com/lhb1WmKKMF

In this article, I’ll go into more detail and unpack these concepts (more than 280 characters at a time). We’ll then understand the proper role — and limitations — of monitoring, the laws of nature governing observability datastores, and how changes should serve as the guideposts for most observability explorations.

The Anatomy of Observability 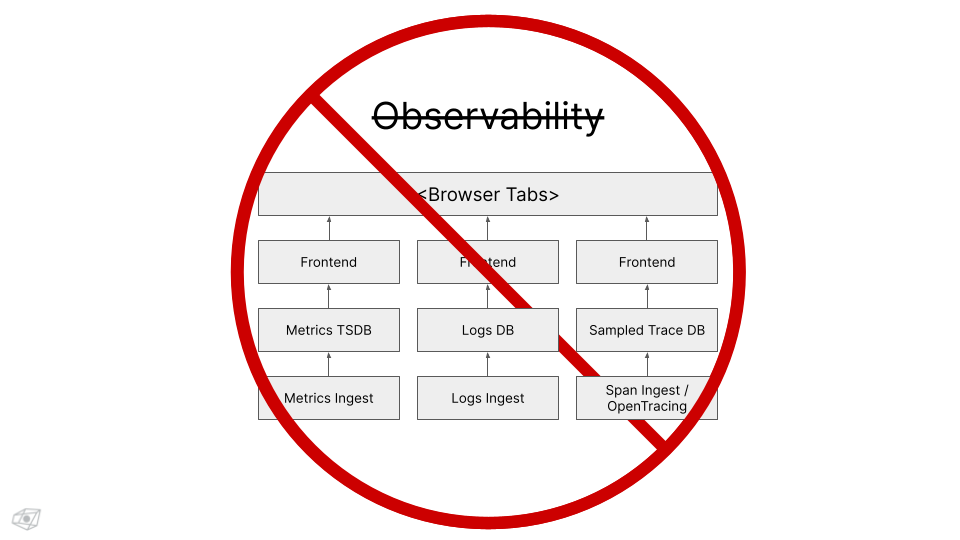 There’s been an unfortunate tendency to confuse Observability with Telemetry. Or, at least, with loosely integrated UIs built on top of telemetry silos — as shown in the diagram above. In this formulation, Observability is somehow explained as the mere coexistence of a metrics tool, a logging tool, and a tracing tool. Unsurprisingly, this idea is propped up by vendors who built or acquired products built upon each of those so-called “pillars” — and now they want to sell them to you! Hmm.

In short: do not mistake the coexistence of metrics, tracing/APM and logging for “Observability.”

Lightstep is the easiest way for your team to monitor health and respond to changes in cloud native applications. Powered by distributed tracing, metrics, and built by the team that launched observability at Google, Lightstep’s Change Intelligence answers the question “What caused that change?”
Read the latest from Lightstep

Like most bad ideas that actually gain some momentum, there is a grain of truth here: in particular, that the traces, metrics and logs all have a place in the ultimate solution. But they are not the product — they are just the raw data. The telemetry.

So, if Observability is more than “metrics, logs, and traces,” what is it? 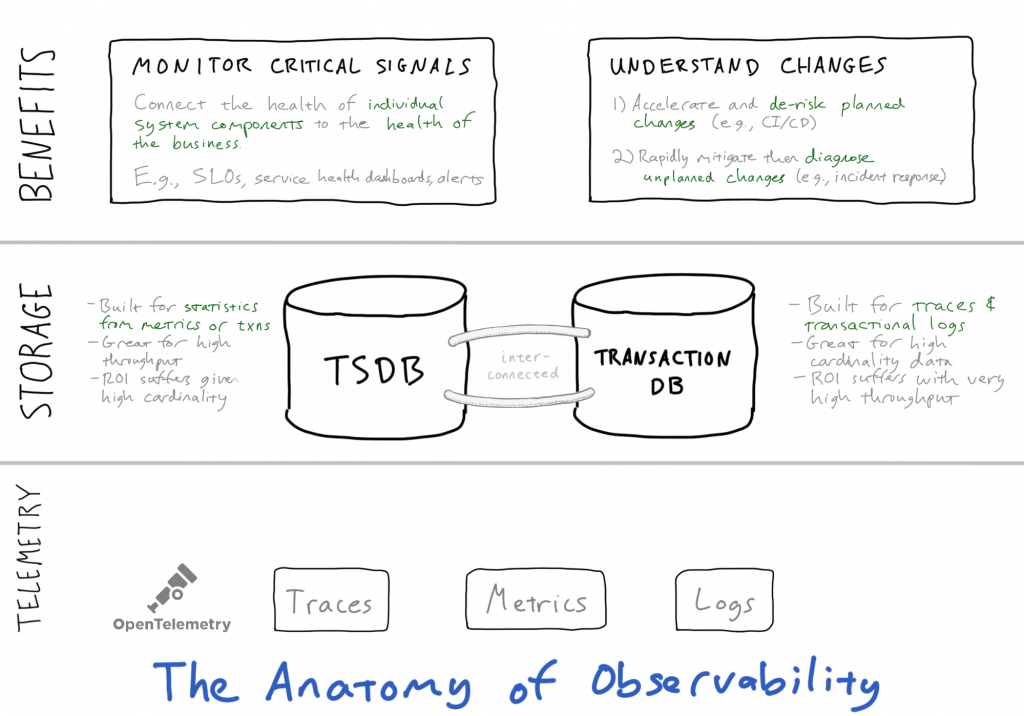 Indeed, we cannot have Observability without the raw telemetry data. As far as gathering that telemetry, historically engineering organizations had two options:

Both options were expensive, albeit in different ways — but thankfully there’s now an alternative that brings the best of both worlds: OpenTelemetry.

The OpenTelemetry project (aka “OTel”) aims “to make high-quality telemetry a built-in feature of cloud-native software.” All major cloud vendors have pledged their support for OTel (including Amazon Web Services, Azure, and GCP) and the same can be said for most vendors offering some sort of Observability solution (including Lightstep, as a founding member of OTel, naturally!).

Since OTel supports automatic instrumentation, it’s now possible to get high-quality, vendor-neutral telemetry without code changes. In this way, OTel is disrupting the idea of proprietary agents and, in turn, the vendors that differentiated with them. Plus, with native OTel and OTLP (“OpenTeLemetry Protocol”) support arriving across the infrastructure stack, there will no longer be a need to buy Observability from a vendor just to gain access to their suite of data integrations. Any OTel-compliant Observability provider will have access to high-quality telemetry, across the stack, and all with zero vendor lock-in. It’s better for everyone — perhaps with the exception of incumbent vendors, who must make peace with the sunk cost they’ve spent on innumerable “cloud integrations.”

If “Layer 1” is about gaining access to high-quality telemetry, then “Layer 2” is about where you send it, as well as how — and for how long — you store it. When considering datastores for Observability, I’m reminded of a bumper sticker I saw a while back. It read:

When it comes to Observability datastores, we find ourselves in a similar predicament. Rendered as a bumper sticker, it might look like this:

Fundamentally, if we want to handle high-throughput data efficiently (for example, accounting for 100% of all messages passed in a scaled-out app, or even taking high-fidelity infra measurements like CPU load or memory use per container), we must record statistics to a time-series database. Otherwise, we waste too much on the transfer and storage of individual events. And while some might suggest you can sample the events, for low-frequency data hidden within the high-frequency firehose, you can miss it altogether. This situation calls for a dedicated Time Series DB (TSDB): a data store designed specifically for the storage, indexing and querying of time-series statistics like these.

And yet! If we want to handle high-cardinality data (for example, per-customer tags, unique ids for ephemeral infrastructure, or URL fragments), a TSDB is an unmitigated disaster — with the explosion of tag cardinality comes an explosion of unique time series, and with it an explosion of cost. And so there must be a Transaction DB as well; traditionally this was a logging database, although it’s wiser to build around a distributed-tracing-native Transaction DB (more on this later) that can kill two birds (logs and traces) with one stone.

Still, finding best-of-breed Transaction and Time Series Databases is necessary but not sufficient. To make the actual “Observability” piece seamless, the data layer needs to be integrated and cross-referenced as well — preferably deeply.

No wonder high-quality Observability can feel so elusive. This brings us to the third and most important layer of our Observability Anatomy…

At the end of the day, telemetry — whether in motion or at rest — is not intrinsically valuable. It’s only the workflows and applications built on top that can be valuable. Yet in the conventional presentation of “Observability as Metrics, Logs and Traces,” we don’t even know what problem we’re solving! Much less how we’re solving it.

When it comes to modern, distributed software applications, there are two overarching problems worth solving with Observability:

Somewhere along the way, “monitoring” was thrown under a bus — which is unfortunate. If we define monitoring as an effort to connect the health of a system component to the health of the business, it’s actually quite vital. The cleanest and most progressive way to approach this is with a well established organizational process around service level objectives (SLOs), but it’s a sliding scale. What’s most important is that there’s continuous monitoring in place for the key APIs and control surfaces in each subsystem and that an operator can quickly assess subsystem health — at a glance — and quickly spot when and where a particular symptom might have flared up.

For maximum flexibility and minimum redundancy, thoughtful monitoring must be able to measure symptoms found in the Time series DB or the Transaction DB. That is, monitoring certainly needs access to the metrics data, but it also needs to be able to query the transaction (i.e. tracing) data in real-time.

In any case, monitoring should only be used to measure subsystem health and gain advance warning about threats to that health. Monitoring is not where we’re meant to diagnose changes to that health; and this is where so many organizations have gone astray.

If you try to solve incident response with the same basic monitoring tooling you’re using for incident detection, you’re in for a world of pain. That’s because dashboards and alerts — and even SLOs — are great for detecting health problems, but lousy for diagnosing or even remediating them.

“Monitoring” got a bad name because operators were trying to monitor every possible failure mode of a distributed system. That doesn’t work, because there are way too many of them. And that’s why you have too many dashboards at your company.

So how do we effectively isolate and identify these failure modes? 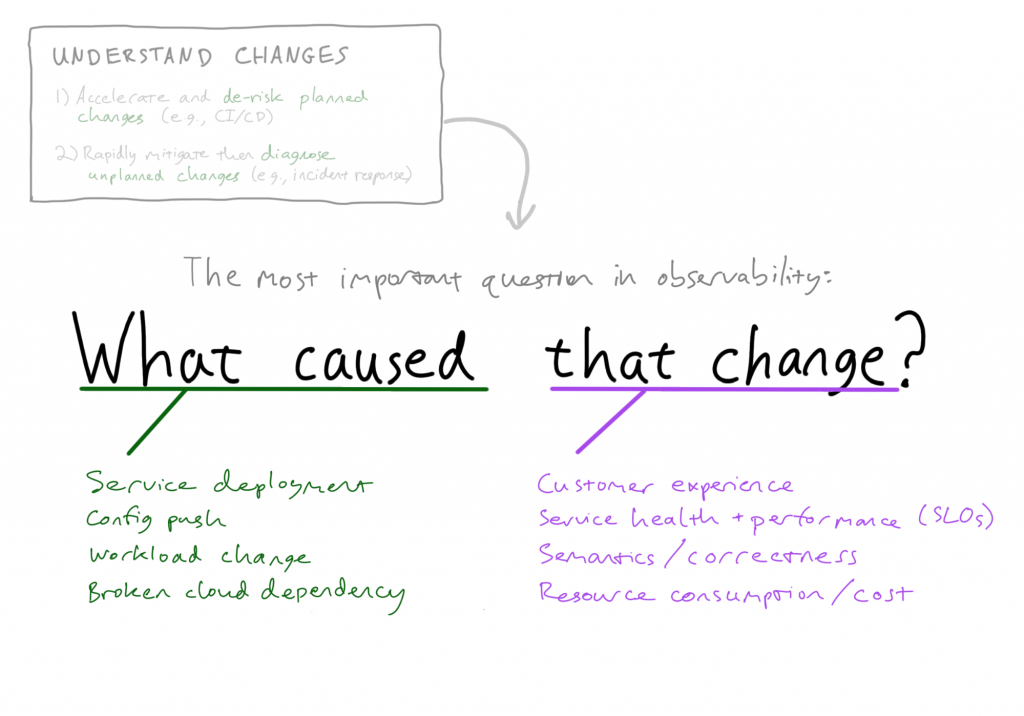 If we only needed to stabilize our software, there’s no question where to start: for cloud native apps, more than 70% of all incidents stem from some sort of intentional change (typically a service deployment or a config push). Unfortunately, if we stop pushing new code to production, our products lose out to competitors and our employers eventually cease to exist! So that can’t be the long-term strategy, even if we’ll still want to declare deploy freezes over holiday weekends.

Stepping back, there are really only two types of change: planned and unplanned. For planned changes, Observability can close the loop for CI/CD and give us more confidence about the local and global health of our deployments (more about that here and here).

And for unplanned changes, Observability is the only game in town: since distributed applications have uncountably large numbers of potential failure modes, our approach to quickly understanding unplanned changes must be dynamic and must cross service boundaries. At the outset, this means that our workflow must touch both the time series metrics that often start these investigations, as well as the tracing data that guides our analysis from one service to the next.

Some have tried to tackle this massive data analysis problem with a similarly massive query language and lots of detailed documentation. This doesn’t work, for organizational reasons: the problem is that Observability becomes an expert system and in the process, it becomes inaccessible to the generalist engineer/DevOps/SRE who’s wrestling with the “unplanned change” we started with.

Let’s state the obvious: Observability isn’t valuable if you need to retrain your organization in order to leverage it. Observability can be transformative for an organization, but only if its power is self-evident and accessible. And nobody likes reading manuals, particularly during an incident!

This is why “change” needs to be a fundamental primitive for effective, well-adopted observability. When Observability is framed in the context of a known change, the insights buried in the firehose of telemetry data can be contextualized and ranked. In this way, the focus on “change” is mutualistic for both the operator and the tooling: it gives the tooling a clear objective function to explain, and it gives the operator a more digestible UX.

The whole point of Change Intelligence is to start with an identified change — perhaps from an alert, perhaps from a CI/CD system, perhaps just from clicking on a deviation in a dashboard — and have the Observability solution explain the change, all without meddling with manual queries or thinking about where the telemetry came from or where it’s stored.

So let’s boil the above down to four short guidelines:

With this framework, we see how to integrate telemetry, how to sniff out a data layer that’s too good to be true, and how to evolve conventional monitoring while integrating the valuable insights of a modern observability solution.