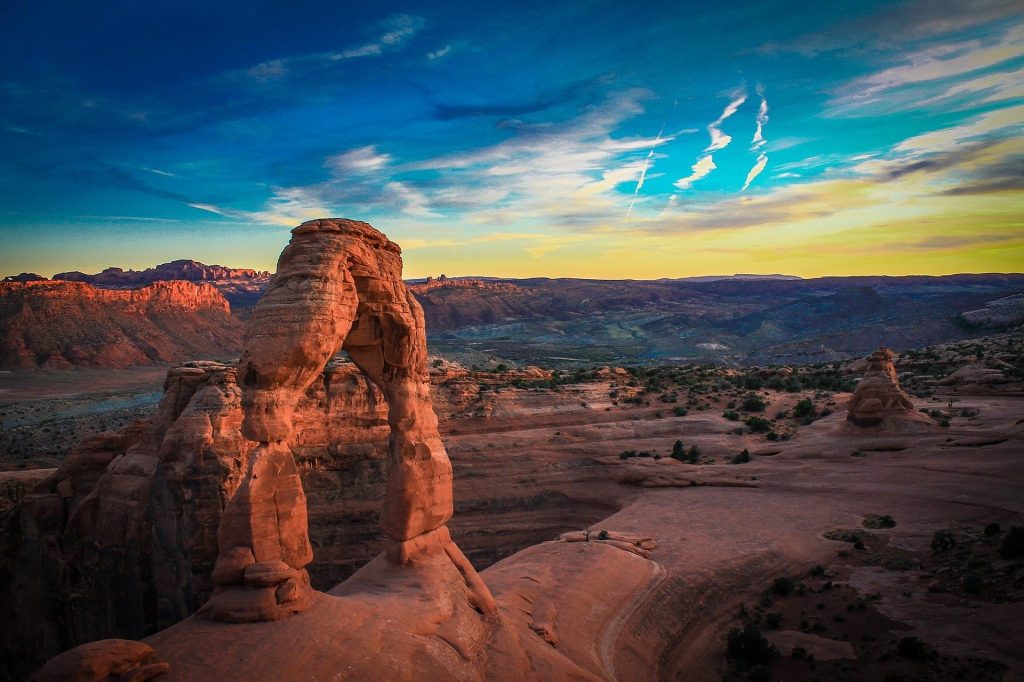 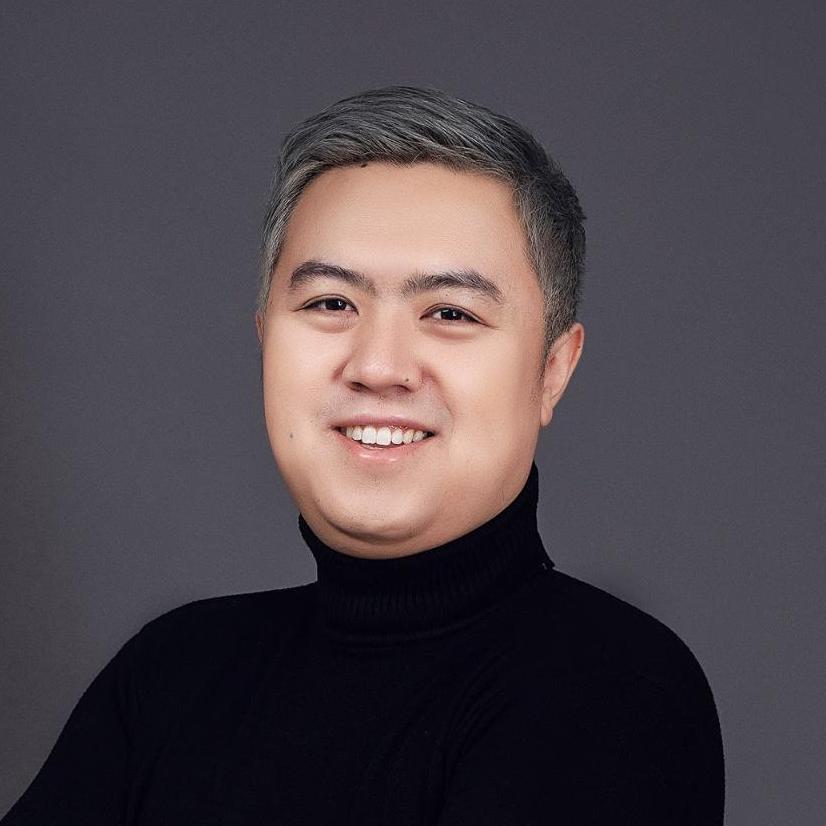 Hongtao Gao
Hongtao is a Tetrate engineer and former Huawei Cloud expert. One of PMC members of Apache SkyWalking, he participates in such popular open source projects as Apache ShardingSphere and Elastic-Job.

In a previous article, we talked about observability of service mesh in a Kubernetes environment and applied it to the bookinfo application in practice. But in that scenario, in order to map IP addresses to services, SkyWalking would need access to service metadata from a Kubernetes cluster — which is not available for services deployed in VMs. In this tutorial, we’ll demonstrate how SkyWalking’s new analyzer can give you better observability of a mesh that includes virtual machines.

What makes VMs different from Kubernetes is that, for VM services, there are no places where we can fetch the metadata to map the IP addresses to services. 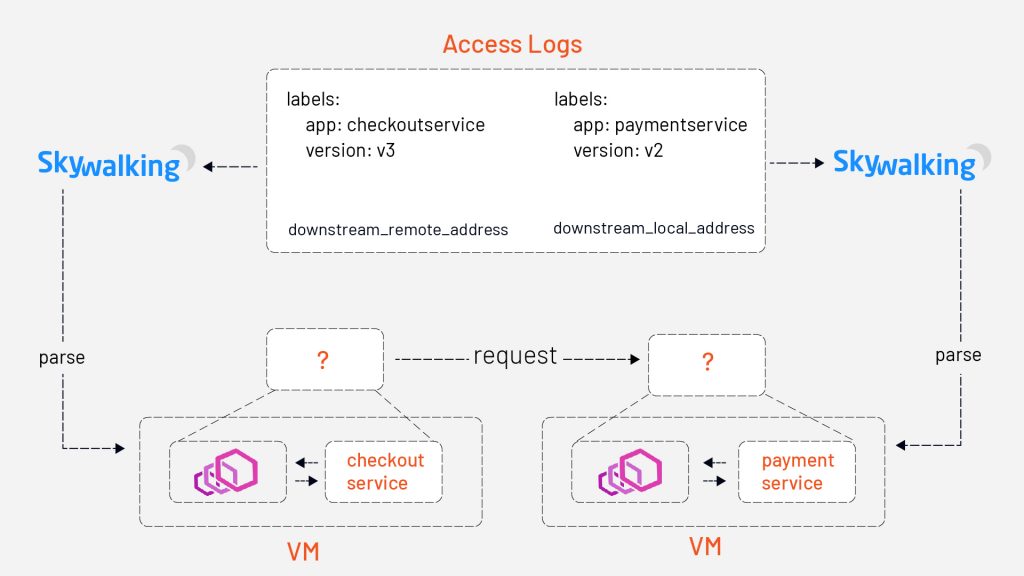 The mechanics of SkyWalking Analyzer are the same as we’ve previously described, but the basic idea we present in this article is to carry the metadata along with Envoy’s access logs — which is the metadata-exchange mechanism in Envoy. (The Access Log Service, or ALS, is an Envoy extension that emits detailed access logs of all requests going through Envoy).

When the Istio pilot-agent starts an Envoy proxy as a sidecar of a service, it collects the metadata of that service from the Kubernetes platform — or a file on the VM where that service is deployed — and injects the metadata into the bootstrap configuration of Envoy. Envoy will carry this metadata transparently when emitting access logs to the SkyWalking receiver. 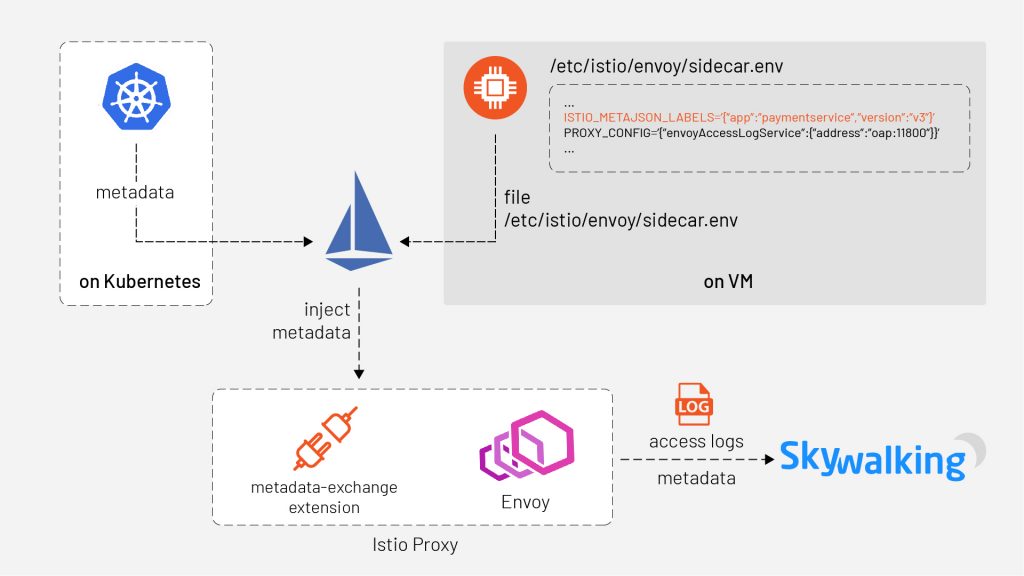 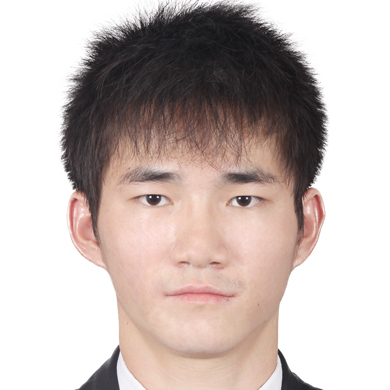 Zhenxu Ke
Zhenxu is a Tetrate engineer and a PMC member of Apache SkyWalking. He is also an Apache Dubbo committer. 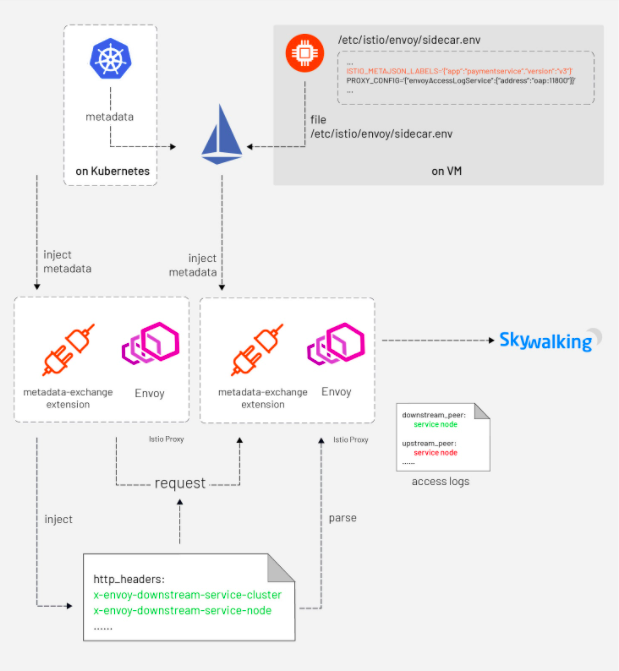 With the metadata-exchange mechanism, we can use this metadata directly without any extra query. 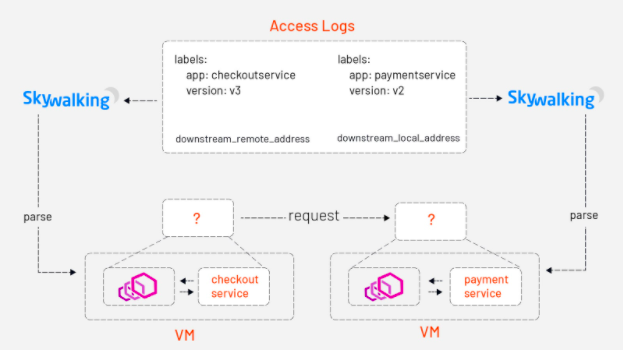 In the following tutorial, we will use another demo application — Online Boutique — which consists of 10+ services, so that we can deploy some of them in VMs and make them communicate with other services deployed in Kubernetes.

NOTE: All the commands used in this tutorial are accessible on GitHub.

Make sure to init the gcloud SDK properly before proceeding.

Modify the GCP_PROJECT in file env.sh to your own project name. Most of the other variables should work if you keep them intact. If you would like to use ISTIO_VERSION >/= 1.8.0, please make sure this patch is included.

00-create-cluster-and-vms.sh creates a new GKE cluster and two VM instances that will be used through the entire tutorial, and sets up some necessary firewall rules for them to communicate with each other.

01a-install-istio.sh installs Istio Operator with spec resources/vmintegration.yaml. In the YAML file, we enable the meshExpansion that supports VM in mesh. We also enable the Envoy access log service and specify the address skywalking-oap.istio-system.svc.cluster.local:11800 to which Envoy emits the access logs.

01b-install-skywalking.sh installs Apache SkyWalking and sets the analyzer to mx-mesh.

Create Files to Initialize the VM

02-create-files-to-transfer-to-vm.sh creates necessary files that will be used to initialize the VMs.

03-copy-work-files-to-vm.sh securely transfers the generated files to the VMs with gcloud scp command.

Because we want to deploy CheckoutService and PaymentService manually on VM, resources/google-demo.yaml removes the two services from the original YAML. 04a-deploy-demo-app.sh deploy the other services on Kubernetes.

The demo application contains a load generator: a service that performs requests repeatedly. We only need to wait a few seconds, and then open the SkyWalking web UI to check the results.

Navigate the browser to http://localhost:8080. The metrics, topology should be there. 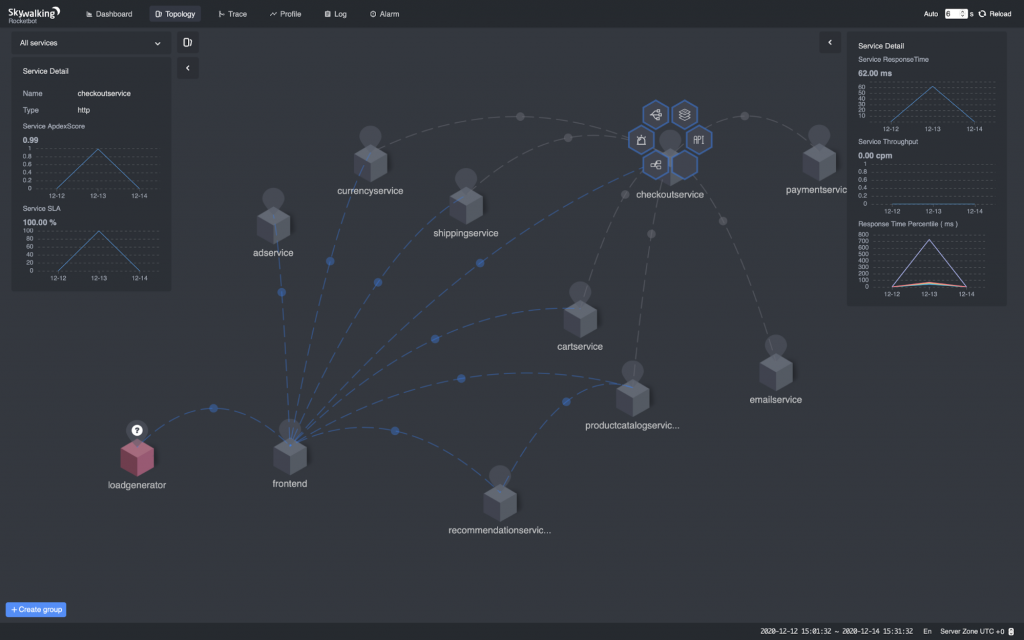 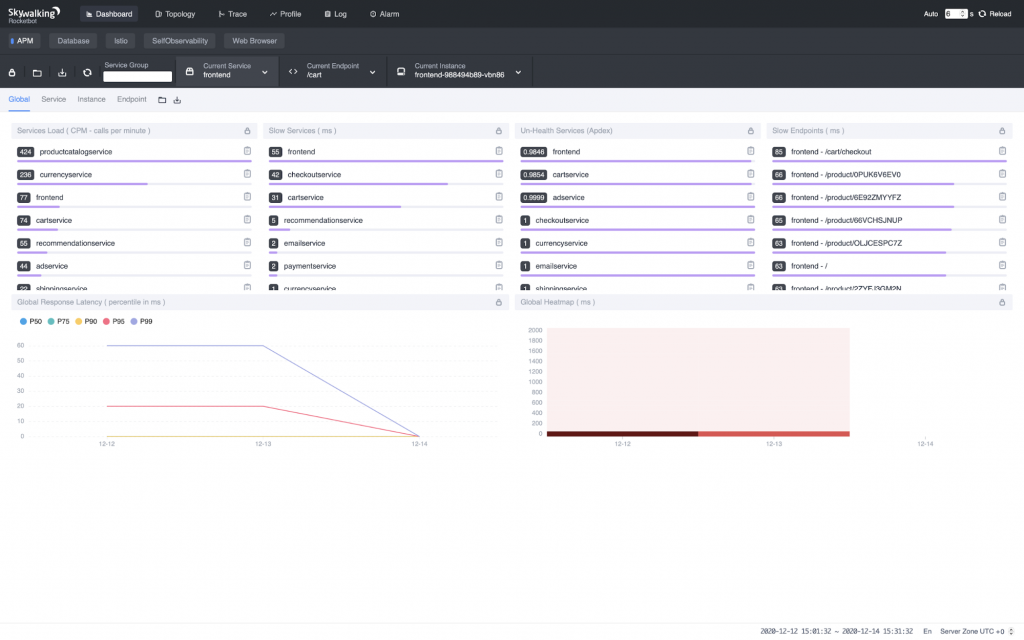 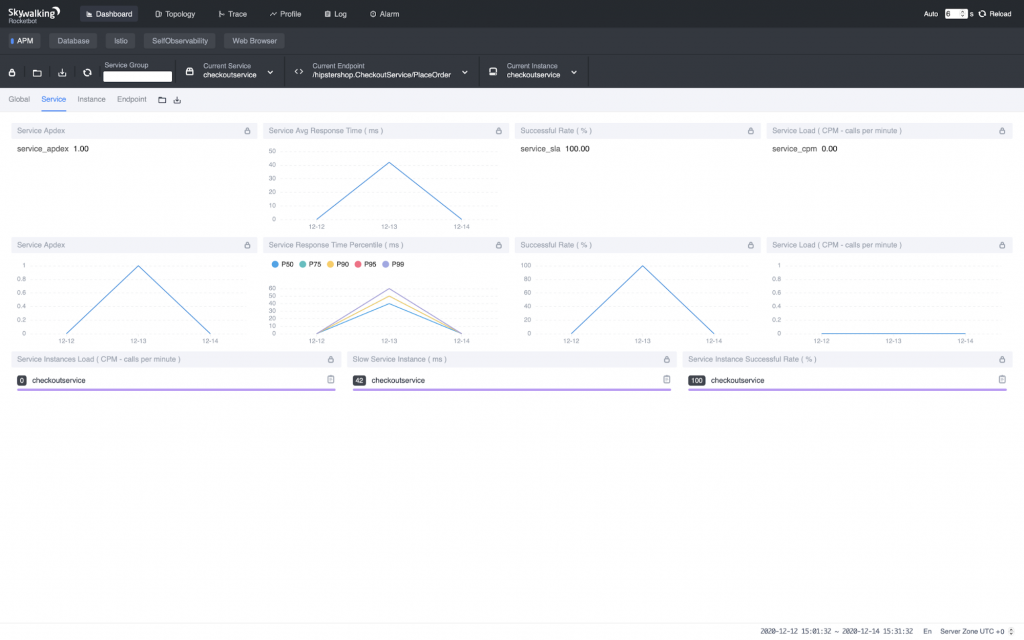 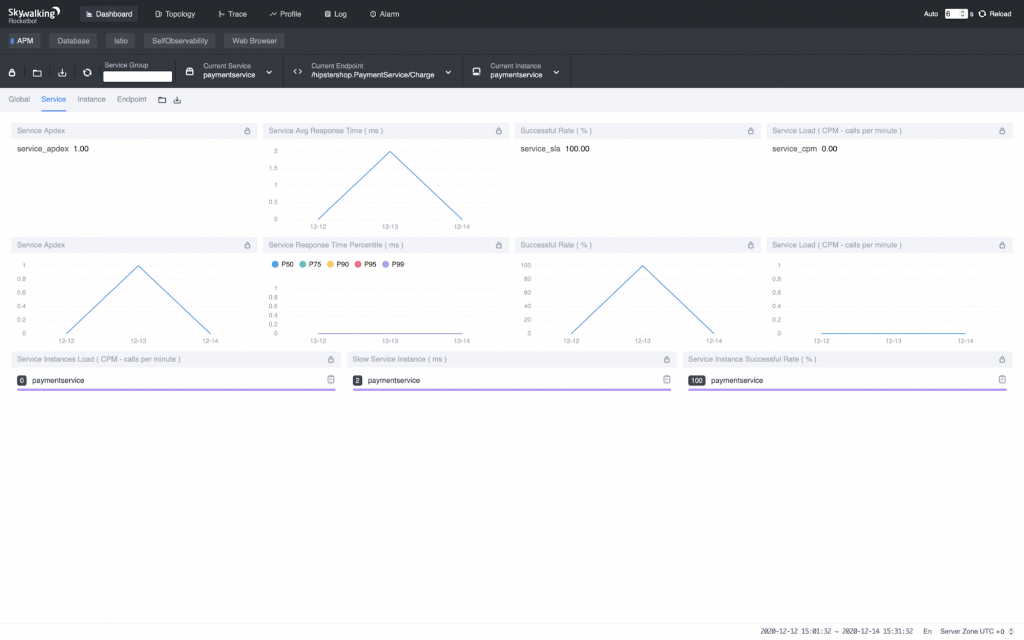 If you face any trouble when following the steps, here are some common problems and possible solutions:

It’s likely the DNS on the VM doesn’t correctly resolve the fully qualified domain names. Try to verify that with nslookup istiod.istio-system.svc.cluster.local. If it doesn’t resolve to the Kubernetes CIDR address, recheck the step in prep-checkoutservice.sh and prep-paymentservice.sh.

If the DNS works correctly, try to verify that Envoy has fetched the upstream clusters from the control plane with curl http://localhost:15000/clusters. If it doesn’t contain the target service, recheck prep-checkoutservice.sh.

Services Are Normal but Nothing on SkyWalking WebUI?

Get a free e-book on SkyWalking from Tetrate; read more about SkyWalking on their blog and sign up to hear more about observability.

Questions and feedback can be addressed to [email protected].