Off-The-Shelf Hacker: American Manufacturing Gets a Boost with Maker Ingenuity 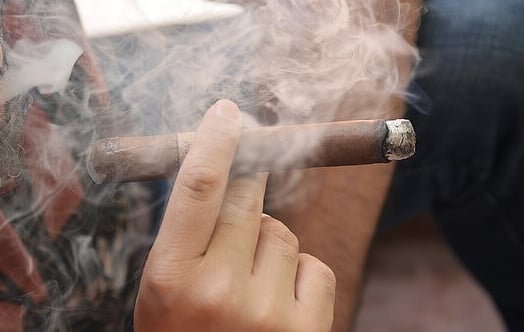 It’s a classic scene, two guys sitting on the porch at early evening, discussing world affairs. Rob Concepcion lights up his stogie and takes a swig of his coffee.

It’s right after the 4th of July weekend, and seemed like a perfect time to talk to Concepcion, a long-time family friend, about his labor-of-love, the Cigar Cannon, made with off-the-shelf computer numerical control (CNC) machines, software and keen vision of the future of American manufacturing.

Talk turns to one of his favorite brands, the JC Newman Diamond Crown and laments that the Tampa-based company is the last cigar manufacturer in Florida. 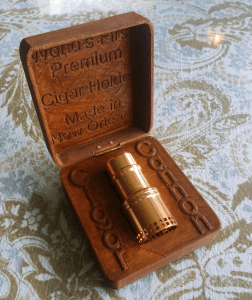 In 1900, with hundreds of thriving local companies employing thousands of workers, Tampa’s Ybor City became known as the “Cigar Capitol of The World” The Great Depression, the early 1960’s Cuban embargo and recent government regulations today, have all but killed the industry in the state, although JC Newman is hanging tough.

Nevertheless, demand for premium cigars continues to build, so the market for Rob’s high-tech product is growing, as well.

Aficionados have always faced a couple of fundamental challenges when it comes to enjoying their favorite tobacco rolls.

First, as a cigar burns it gets hot to the touch, most noticeably after the half-way point. Concepcion saw all the discarded, half-smoked cigars at festivals and thought that there must be a better way. People were throwing away half of their prized sticks, some of which cost tens or even hundreds of dollars.

Another thing was that saliva on the outside wrapper caused cigars to become bitter as they burned. It also causes an undesirable feel on the lips as the end of the cigar inevitably became wet.

Wooden holders, around the turn of the 20th century, were occasionally used to hold cigars. Although the concept was sound, popularity was minimal mainly because they only came in one size.

After two years of R&D, Rob came up with a cigar holder design that doesn’t waste anything. You simply clip the cigar and gently twist it into the Cigar Cannon for an airtight seal. The stepped-internal design accommodates everything up to the largest 64/64 selection.

Made from aluminum, the Cigar Cannon stays cool, and one can smoke as much or as little as desired. It’s easy to simply clip off the burning end and save what’s left for later use. Since the inside of the Cigar Cannon is polished to an exceedingly smooth finish, the outer wrapper of the cigar doesn’t tear, even when removing the remainder for storage. Finally, customers can rest assured that the last draw will be just as flavorful as the first, with no bitterness, since the lips never touch the wrapper.

Manufacturing the Cigar Cannon is a study in cutting-edge off-the-shelf technology and processes.

An American company named Sherline, supplies the CNC lathes and milling machines. Rob uses the high-end #4410 mill and #2010 lathe, which are the both metric models. He found it easier to work with metric measurements for small parts and his custom tooling fixtures. The common spindle feature of the Sherline products, also allows parts to be moved from machine to machine, without unbolting, thus improving workflow. 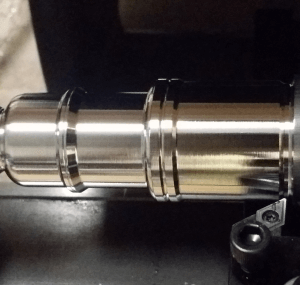 Turning The Part On The CNC Lathe

He starts with solid 16 foot long, 6061 aluminum round stock and cuts it to the working length for each Cigar Cannon. Custom work holders, designed and built in-house, position the parts for machining.

The outside of the Cigar Cannon is turned on the CNC lathe, following a profile created using the OneCNC program, which is considered 2D computer aided design (CAD). Since there’s only X-Y tool movement when turning parts on the lathe, modeling the part in 3D isn’t necessary.

After turning the outside and boring out the inside, the part is polished on the lathe, at high speed by hand. Several polishing steps are performed throughout the entire build cycle.

The part is then moved over to the CNC mill for the engraving of the company logo and serial number. Each Cigar Cannon has a unique serial number that is tracked by the company and can be used to return a wayward Cigar Cannon to its owner. Rob uses the Vectric software for engraving. He said it’s an excellent product, and you can easily lay out engraving for virtually any surface, including around the cylindrical shape of the Cigar Cannon. 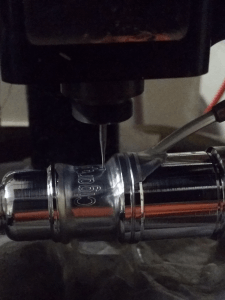 While the part is still on the mill, the big-end cross-drilling is performed. G-Code for the cross drilling, the instructions that direct the CNC mill, were developed in-house.

MACH3 software interprets the G-Codes for each machine.

The Cigar Cannon build process isn’t totally automated, due to the required hand polishing, hand beveling and manually moving the part between machines. Nitrile gloves are worn throughout the process to ensure high-quality and that the customer will be the first human to touch a brand-new Cigar Cannon.

After all the machining is completed, the Cigar Cannon gets anodized and then cures for a minimum of 48 hours. As you might expect, gold is the most popular color. Other choices include silver, bronze, deep blue, copper and brown.

The design starts with a 3D CAD model created in Rhino software. There’s a molded recess in the lower half of the hinged box for the product.

Rob employs Simplyfy3D software with Robo3D printers to slice the model and then print using a special wood-based filament. The cutting-edge filament is 80 percent pine and 20 percent binder, so the boxes are actual wooden products. Cigar Cannon logos are embossed on the bottom of the box and a “Fleur-De-Lis” inlay, a symbol of New Orleans, adorns the top. There’s also some “engraving” on the inside of the lid.

The 3D printer engraving just sort-of doesn’t lay down the filament for the letters, as opposed to a traditional engraving by routing out (removing) the material. It’s called additive (or not adding in this case) manufacturing. Printing the base and lid each take two about hours. Multiple will printers allow scaling for higher volume.

Since 3D printing is a no-waste manufacturing process, the boxes only need a light hand sanding and then hand staining using a rag. All surfaces of the box are then sealed with an acrylic coating.

Customers also get a mouth guard sleeve, that prevents mishaps, when clenching the cigar holder between teeth. The sleeve is modeled using the Rhino software and printed using an organic elastomer filament, on the Robo3D printer. 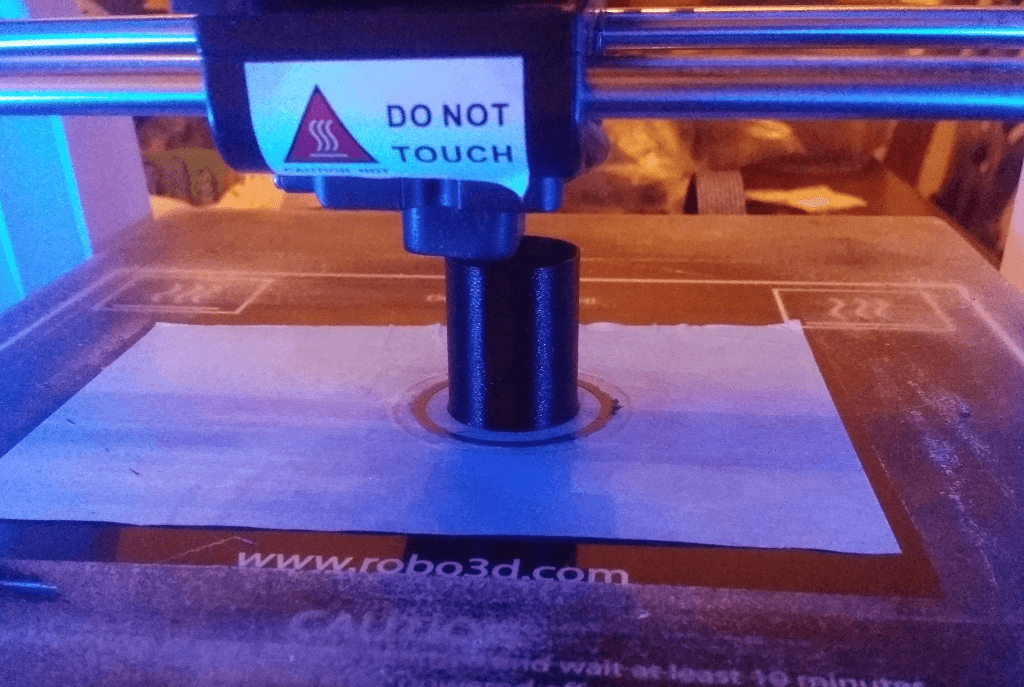 Printing The Mouth Guard Sleeve On The Robo3D Printer

Using the 3D printer for both the boxes and the sleeve is an example of the flexible thinking required to compete in today’s fast moving manufacturing environment.

Concepcion sees his product as an heirloom that will last a long time and can be passed down from generation to generation. He’s proud to say it’s 100 percent American made, in New Orleans.

In a larger sense, he thinks that the key strategic advantage for American companies to compete with the huge volume manufacturers in China and other places around the world lies in making super-high quality products in small batches, using American labor. Let the quality speak for the product, not quantity. He’s convinced that the small boutique model, offering guaranteed quality, is the future of American manufacturing.

“While most entrepreneurs fear tech, it is only tech such as CNC machines and 3D printing that can help the average American inventor succeed in a world dominated by big corporations.” he said, bringing the quiet summer evening to a close.

Rob "drtorq" Reilly is an independent consultant, writer, and speaker specializing in Linux/OSS, physical computing, hardware hacking, the tech media, and the DIY/Maker movement. He provides a variety of engineering, business and special project services to individual clients and companies....
Read more from drtorq
SHARE THIS STORY
RELATED STORIES
Devs Most Likely to Learn Go and Rust in 2023, Survey Says How New Sony AI Chip Turns Video into Real-Time Retail Data OpenSSF Aimed to Stem Open Source Security Problems in 2022 Entrepreneurship for Engineers: Avoiding Feature Bloat GPTZero: An App to Detect AI Authorship
SHARE THIS STORY
RELATED STORIES
Generative AI: How Companies Are Using and Scaling AI Models Anil Dash on Mastodon Joining Fastly’s Open Source Program 5 Security Principles to Guide Your DevSecOps Journey Feature Flags Are Not Just for Devs OpenAI, ChatGPT and the Next Age of 'Build'
THE NEW STACK UPDATE A newsletter digest of the week’s most important stories & analyses.
The New stack does not sell your information or share it with unaffiliated third parties. By continuing, you agree to our Terms of Use and Privacy Policy.