Behold! The Steampunk Eyeball is Complete 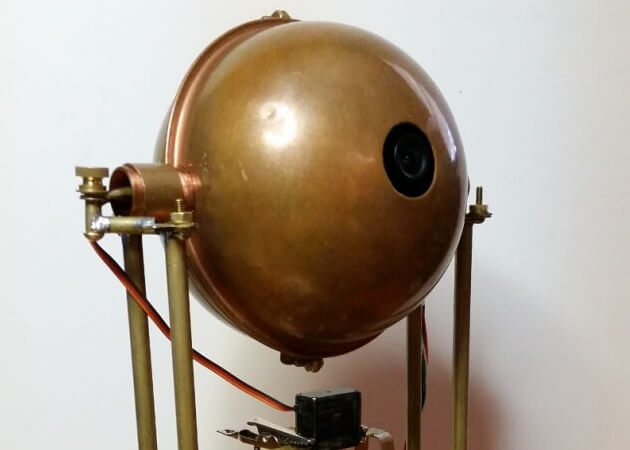 Building a Steampunk Eyeball (Part One, Part Two, Part Three, Part Four) has been fun. I’ve learned a lot, and hope readers have, as well.

In this edition, we’ll wrap-up this past week’s fabrication, analyze the results of the project, summarize challenges and solutions, then look at what might be in store for future Steampunk Eyeball enhancements.

But first, let’s take a moment to enjoy the completed eyeball in its completed glory:

Finishing up Fab on V1.0

The Steampunk Eyeball pan/tilt mechanism is pretty worthless, without an interesting way to show it off and have it do something. Certainly, some type of solid base was needed. I found a decorative metal candle holder at Old Time Pottery that ended up being a great foundation. I originally thought it would serve as the eyeball part itself. Then, I got the bright idea of using a copper lightning rod ball. Happily, the candle holder was just the right proportion for the pan pivot tube mounting and had that decidedly steampunk look, so it was pressed into service.

The candle holder is mounted upside down to a couple of 1/2-inch-thick plywood disks, that fit in the top and bottom. I used a 5/8-inch diameter spade bit, in the drill press to make the holes in the disks, for the copper pan-pivot tube. Four 4-40 x 1-inch round head brass machine screws fastened the pivot-tube bracket to the top of the candle holder and its 1/2-inch thick disk. The open end of the candle holder (now the bottom) has a matching 1/2-inch thick wooden disk and 5/8-inch hole for the bottom of the pivot tube. The bottom of the candle holder is attached to a piece of scrap laminated wood flooring, using brackets, to create the base. Laminate flooring is perfect because it has dense foam rubber that acts as a non-slip bottom allowing stability on a variety of surfaces. It also has that antique dark-wood steampunk look. The eyeball will likely sit on a table or podium when it’s not in its storage case.

I also did quite a bit of testing and tweaking this week. It’s amazing how much easier (and interesting) it is to test with a device that’s pretty close to complete. Getting the base finished and the eyeball stable, allowed me to concentrate on exploring how it interacts with the world and what adjustments need to be made for best performance. I’ll use the PixyMon application on a Linux machine to gain more experience with eyeball behavior, as it interacts with its surroundings. It’s not hard to imagine using the data coming out of the Pixy for various scene analysis and visual sensor command unit functions. Certainly, the data could interact with as-yet-undetermined Raspberry Pi or Arduino physical computing tasks.

Whenever you create complex gadgets, particularly physical computing devices, it takes a little while to understand all the quirks and capabilities of your new baby. And, don’t forget that version 1.0 is the first fully operational prototype. You can’t possibly know where you can go with subsequent versions until you spend some time with actual “seat time” using V1.0.

Remember to enjoy the accomplishment and continue to learn.

Yes! While I was wearing a plain blue t-shirt, the eyeball faithfully follows me within a roughly 120-degree arc out to about ten feet. Lots of variables affect tracking such as the ambient lighting intensity, light color temperatures and if the t-shirt has lettering or a picture. Sometimes, I’d see the eye pan off in a crazy random direction only to realize that I had moved out of its field of view, and it had started tracking some other blue object. I’ll probably pack several different colored shirts, then adjust the color signature appropriately when I arrive at a venue.

Everyone who sees the device is impressed. Yes, the ‘wow’ factor requirement was definitely met.

“It likes Margaret,” was a comment from one of my daughter’s friends who attended an impromptu demo. The effect was the eye occasionally picking up splotches of blue color on Margaret’s shirt and then along with the sticky points in the pivots, made it seem like it had a personality. Be sure to note and leverage these kinds of “social intangibles,” in your projects. Crazy as it sounds, these cues help sell authenticity and believe-ability to your audience.

As I took the device out into the world, I realized that safely carrying the device around could be a problem. So, one definite enhancement will be a carrying case. I’m thinking that a short wooden box, with leather hinges and brass embellishments, would add a little mystery and class when traveling to my tech talks. I wonder what the TSA will think of the device when I go through the airport check-in.

It Took too Long

The steampunk eyeball took longer than I thought, although it turned out to be only about 50 hours (over the 5-week series), in total. That’s fairly reasonable, considering I wanted something that would survive actual use, through multiple tech talks.

I’m occasionally accused of being “German” with my attention to detail and engineering persnicketiness. I suppose it’s understandable because my grandfather, Richard Vogt, was a chemistry professor at Notre Dame and a distant second cousin, Howard was an inventor/engineer for Buick. My father Andy Reilly, as an engineer, did stress analysis on the Sprint missile… although he’s obviously Irish.

The servo mechanisms are pretty robust, although they required quite a bit of tweaking, to get working well. For ultra-smooth operation, ball bearing mounts might be a better choice. They would add some weight and require designing suitable mounts and shafts.

Putting the tilt servo inside the eye was the correct decision. I ultimately decided that I wanted the cleaner look of the servo inside the copper sphere. Designing the drive shaft wasn’t in the original plan. Fortunately, it added an interesting visual steampunk detail to the end of the tilt pivot framework.

Here’s a short list of odds and ends, needed to tie everything together. 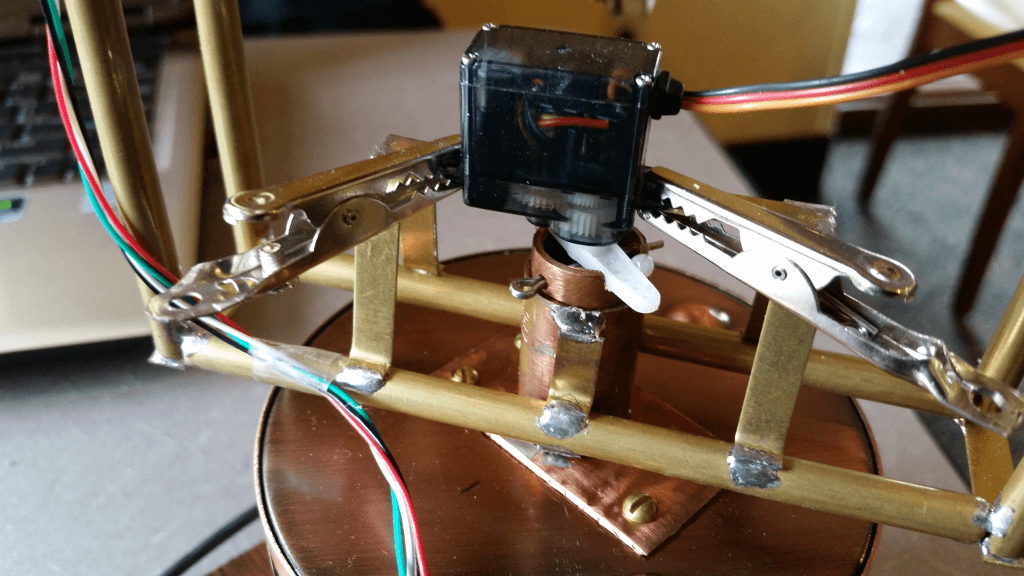 A few things I’d like to add are additional positional sensors that will help record data about where the eyeball is pointed. While the Pixy can give rough distance measurements, according to the size of the box it generates around an object, adding an ultrasonic sensor could provide much more accuracy.

The X-Y position (in the Pixy’s field of view) and distance-to-target (your’s truly in my blue t-shirt) data, would make it possible to develop wireless slave robotic devices for video cameras and lights that would automatically track me as I walk around on stage.

Naturally, getting the data to and from the eyeball would be handled with a highly capable ESP8266 WiFi micro-controller. Using an 8266 could also bring remote servo control and possibly over-the-air adjustments to the Pixy camera configuration.

I hope you enjoyed the Steampunk Eyeball build project and are inspired to develop your own physical computing projects. 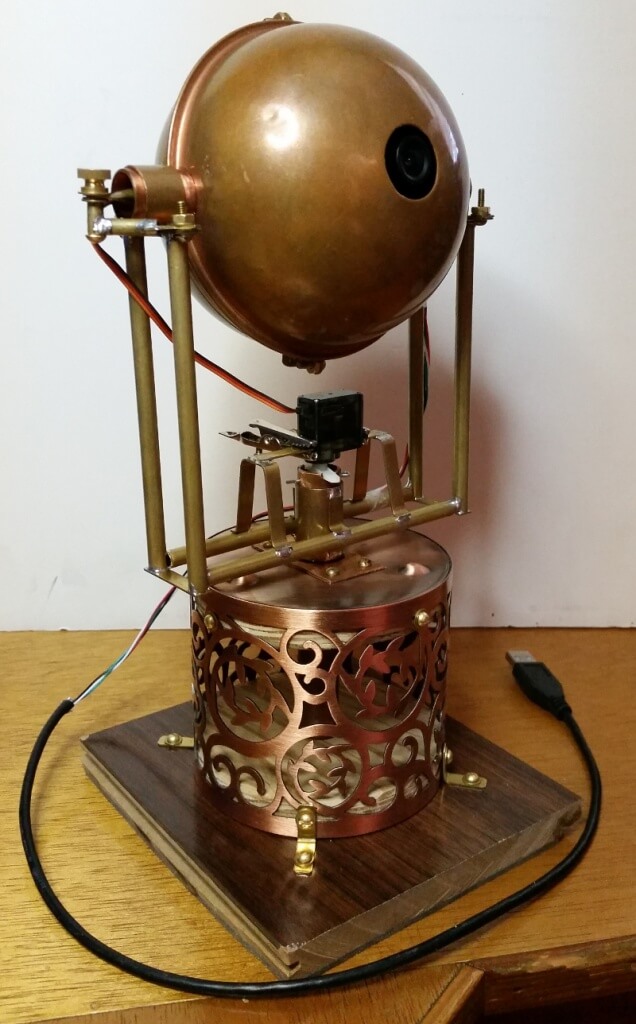