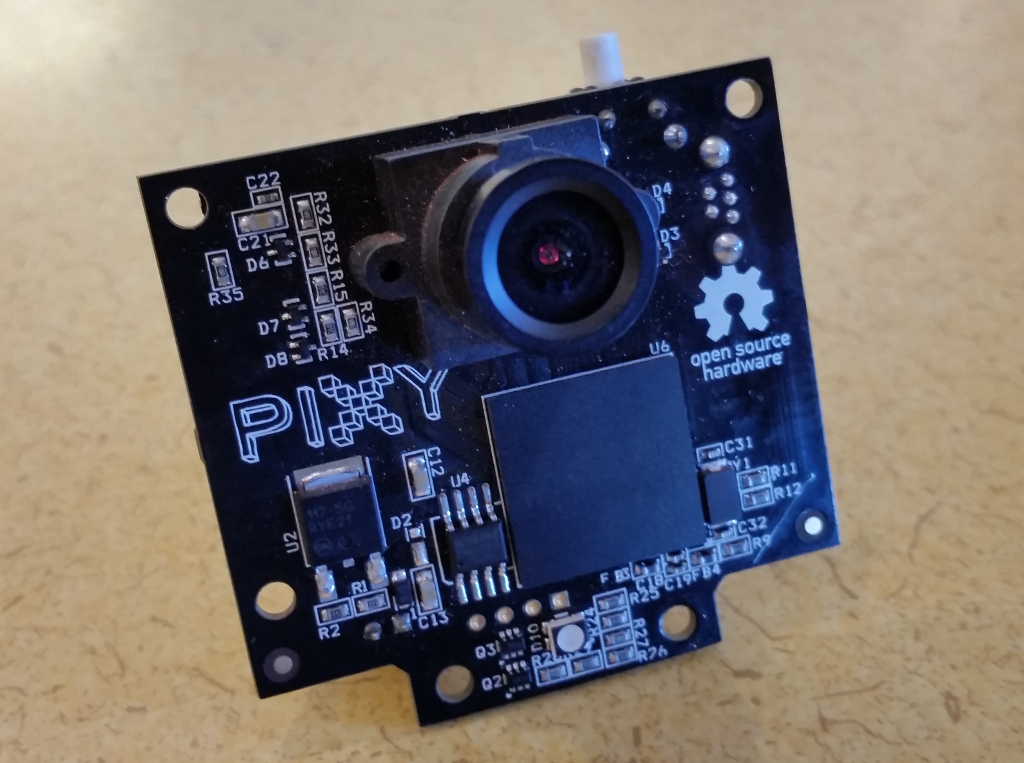 People generally think of sensors as photocells, thermometers or even push-buttons. In terms of hackable hardware, a sensor is an input device, something that produces data or an electrical signal from a physical action. It could be a thermometer, photocell or even a push button.

Sensors can be inexpensive, running from a few pennies up to several dollars each. A regular photocell costs a little less than $1 at Adafruit. Just last week in the Off-the-Shelf Hacker column, we covered using the Dallas DS18B20 digital temperature sensor with the Raspberry Pi. A waterproof DS18B20 with a cable and resistor runs just shy of $10. There are also high-end, exotic — what I call, “packaged” sensors — such as the Pixy machine vision module. Readers may recall the Pixy from the Steampunk Eyeball project, last year.

There’s a new generation of these “packaged” sensors on the market. A packaged sensor is a more sophisticated input device, one that might even have its own on-board computing/analysis capabilities. One of these little wonders is called the JeVois smart machine vision camera.

Like the Pixy, Except Faster, Less Expensive and Linux-Friendly

The Pixy can pick out 100 different objects, consisting of seven different colors at 50 frames per second. X-Y coordinates and the relative size of objects are streamed out over various interfaces, to an Arduino, a Raspberry Pi or your Linux notebook for directing servos, mapping objects in the sensor’s field of view or even to follow a ping-pong ball in flight.

The Eyeball tracked me using hobby servos to pan and tilt as I walked around in a brightly colored shirt. The Pixy has an onboard, purpose-built processor that handles the scene analysis. It figures out what constitutes an object. If you have the development chops, you can program the Pixy with your own algorithms. Although pretty exotic, keep in mind that it’s also four-year old technology. At around $80, the device pushed the limits of hobbyist affordability.

In contrast, the JeVois smart machine vision camera has an Allwinner A33 quad-core Cortex A7 processor, running at 1.34 GHz married to a 1.3-megapixel camera, with 256 MB of RAM, that can analyze scenes at 120 frames per second. It takes up about 1.7 cubic inches of space and lists for about $50.

An important thing that makes the JeVois different from the Pixy is that instead of using embedded algorithms on a one-off processor, it runs Linux on the quad-core chip, while various frameworks and applications do the vision analysis. It can identify defined objects, recognize lines and vanishing points, detect objects by color or use neural networks to spot numbers, letters, bar-codes and other vision-oriented features. Oh, there’s also eye tracking.

The website says that the device looks like a regular web cam when plugged into a Linux notebook or Raspberry Pi and requires no special drivers to work. It offers video-based data streams over the USB cable. An additional serial port streams text-based data for use on simple microcontrollers, like the Arduino.

The documentation on the JeVois is fairly comprehensive, so you might check it out before deciding to purchase one. Here’s a page covering the bundled vision algorithms. I thought this object detection live training video was slick:

Lastly, the JeVois is a full-fledged Linux computer. You can log in over the serial port and use standard Linux commands like ls, cd and chmod. Standard programming languages and frameworks like C, C++, Python, OpenCV and OpenGL are also at your beck and call.

How’s all that for half a Benjamin?

What It All Means

Back in January, I saw the Intel Joule demo at the Embedded Linux Conference in Portland. You may remember that there was quite a bit of hype surrounding the vision processing and Internet of Things capability of the Joule. It was interesting to see the Intel rep train the Joule and then immediately be able to track my face, during the live demo. No doubt, a killer technology.

Sadly, the company discontinued the module this past June. Observers cite the lack of documentation for the Joule’s demise. The steep $370 developer kit price probably didn’t help either.

Upstart devices like the JeVois could be another reason for Joule’s failure.

And, I expect to see more of these new “packaged” sensors real soon. We’re in a time where Off-The-Shelf hardware cost continues to drop, while the horsepower, supporting documentation and example code (and apps) to kick-start your projects just gets better and better.

Development of the Pixy seems to have slowed considerably, as well, while high-dollar players like Intel put hardware out there that may or may not be viable long-term solutions.

It’s always like that. I have tons of parts that were the best thing since sliced bread a mere four years ago. Now they collect dust in a dimly lit corner of the lab.

Don’t let that stop you from exploring the absolutely amazing possibilities with always-new Off-The-Shelf Hacker parts. It’s hard to keep up with the constantly accelerating pace of technology. The only way to do it is to invest some time (and money), learn what you can and try to anticipate what will actually mature into viable real-world solutions.

I’m working on getting my hands on a JeVois, so expect some in-depth coverage in the near future.

Hey, maybe I should launch a tech museum. I could call it “The Museum of Forgotten Hardware.”