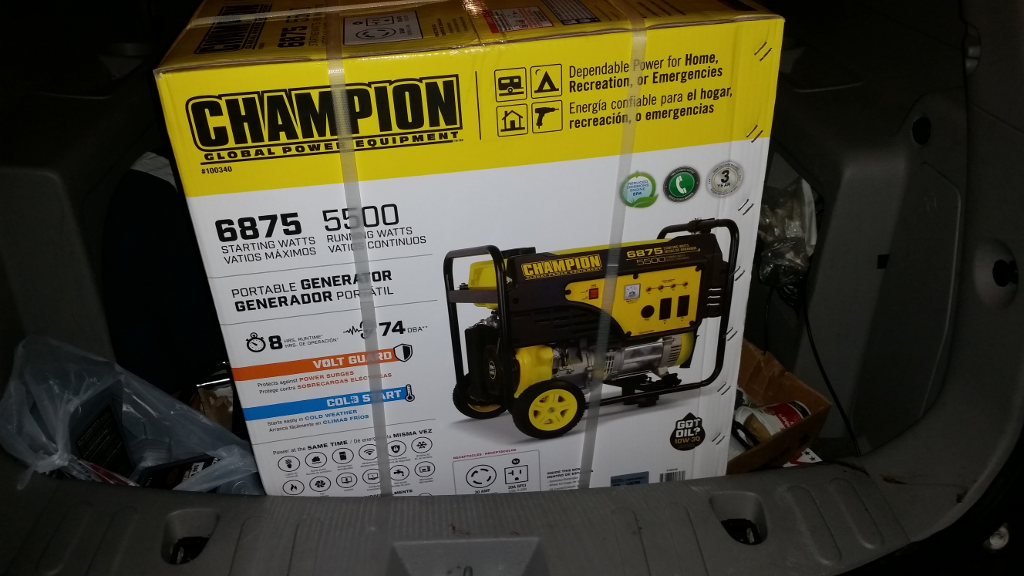 As of the time of this writing, it looks like Hurricane Irma is headed straight up through Central Florida. Alas, everybody has their life’s little challenges.

I wrote about Hurricane Charlie barreling through here back in 2004. The eye passed just north of us at around midnight and by 1 a.m. or so, it was pretty much history. The wind was howling, then it just died and that was it. It was the craziest thing. I don’t recall losing power, although my cable and that all important cable internet connection were down for two weeks when a limb ripped the cable off the pole. Yes, those limbs are trimmed way back today.

Of course, Irma is no Charlie, so the winds and rain will be dicey for about 24 hours or so.

The good thing is that a lot has changed in the ensuing years.

This time I wanted to share a few useful Off-The-Shelf hurricane hacks.

Water Doesn’t Come from a Bottle

Good grief! Everybody in Orlando has been hyperventilating and standing in line for bottled water all week. Ummm, water comes out of the tap, in your sink.

An outstanding hack I heard a few days ago was to fill one-gallon zip-lock bags with water and store them in a plastic bin. Smart hackers fill gallon milk jugs (washed out, of course), gallon cranberry juice bottles, liter soft drink containers and the zip-locks from the tap. Saves you a ton of money and you can store as much as you need. I have two five-gallon plastic water jugs, as well. You’ll need plenty of water to drink, mix with dry food and fill the water closets (potty) so they flush. You could even put a weighted five-gallon bucket outside and collect rain water for that last job if required.

A traditional old-Florida hurricane hack was to use the bathtub as a water storage unit. Make sure to absolutely keep the bathroom door locked if you have small children or pets that might sink.

One of the coolest new hacks, not yet invented in 2004, is a creative use around a Samsung Galaxy 5S Active super phone. Like most modern phones it can function as a WiFi access point, using the cell network as the back-end connection to the internet. Right now I have about 16 GB of data remaining on my current AT&T billing cycle. That’s plenty of data for keeping up with the news and storm tracking, for a few days, if I limit usage to looking at regular web pages and email. Naturally, the authorities suggest that you minimize your online activities, so emergency communications can get through.

Comcast Xfinity has opened their public WiFi networks for use before, during and after the storm. People can log in for two-hour increments, for free, even if you aren’t a customer. We certainly didn’t have this option 13 years ago. My sister is staying with us for the storm and she brought her little Verizon JetPack portable WiFi hotspot. 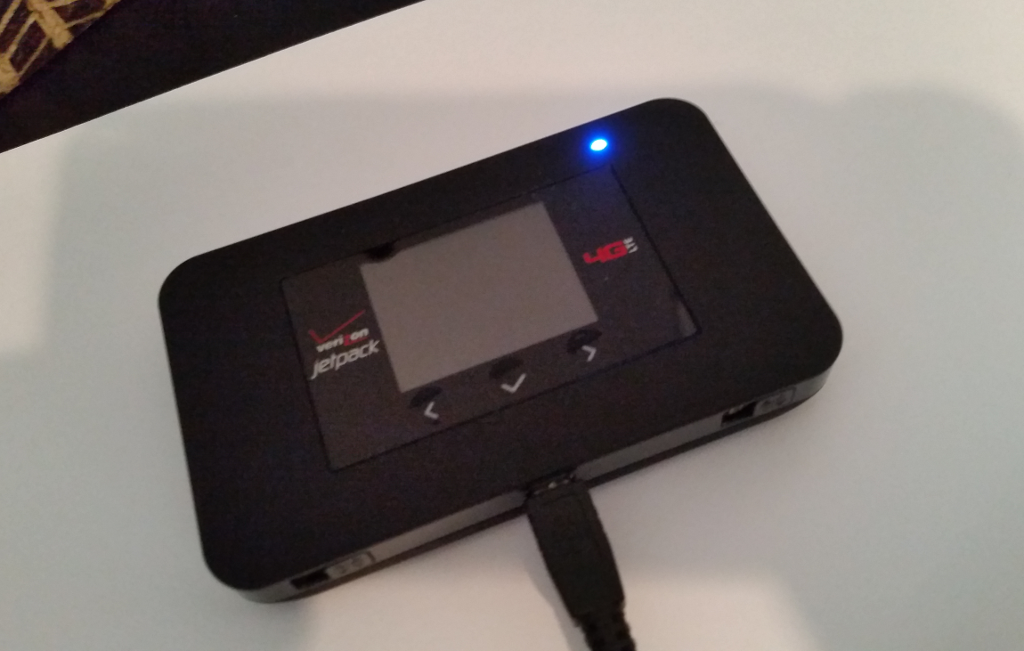 The darned thing will handle up to 15 devices and run up to 24 hours, between charges. Of course, you buy the device and pay for the usage. Still, it’s a pretty useful hurricane hack, if you ask me.

Yes, we have a generator for the fridge, in case the power goes off. With any luck, we won’t have to use it.

Generators have always caused me heartburn. Modern models are no doubt absolutely awesome tech, from an engineering geek’s perspective. My biggest problem is feeding the beast.

The big deal is the fuel. Who wants to store 50 gallons of gasoline, for use over several days of running the dumb generator, around the clock, to keep the fridge, fans, lights, the big screen, router, cable modem, etc. going? That’s ten, 5-gallon jugs of gas. Over 300 pounds of fuel. At today’s prices, that’s pushing $150 just to have it on hand.

Generators flew off the shelves earlier in the week. Like water, everybody just had to have a generator. I can dig it.

With a little more thought, other aspects of the “generator mind-set” starts to become problematic. For example, your regular consumer grade generator (up to 8,000 Watts) isn’t going to run your A/C unit. It simply isn’t big enough. And, you really should have a transfer-switch to connect the generator to the house wiring. You need to make absolutely sure that there is no chance of the generator accidentally becoming connect to the power mains. That would be bad. Those switches cost money to install and maintain.

Running extension cord in from the generator are marginal, in a pinch, although they are always a tripping hazard. You’ll have to run the cable through a slightly cracked-open outside door or window and the number of electrical devices you can hook up to one cord is definitely limited.

As you might also imagine, I’m somewhat less than enthusiastic about venturing out into the driveway, at 2 a.m., in the driving rain and 100 MPH wind to fill up the generator with fresh gas and then yank on the rope to get it going again.

The challenges seem to outweigh the benefits in a lot of ways. Your mileage may vary.

A decent bet to keep your cell phones and small electronics running is a little power bank. Conceivably, a couple of these babies could run your cell phone for a few days. Here’s a 10,000 mAh model for about $20. Need one that lasts longer? They also have 20,000 mAh devices for around $28. As long as you have cell service, you’re connected to the internet.

Batten Down the Hatches and Damn the Torpedoes

With these storms, you do all you can before you run out of time. Then, you just settle down and ride it out. I hate the howling winds that go on for hours, punctuated by the periodic mini-explosions of blowing power line fuses. Not surprisingly, I have trouble sleeping in those conditions. If the power is out, it’s hot and humid. It’s scary and you might even do a bit of soul searching, during those times.

Prepping and utilizing a few hurricane hacks helps. Of course, the tech keeps getting better. Check out this plywood alternative for covering windows against wind damage. Definitely a geeky, high-tech solution.

Oh I almost forgot, the 18-pack of Rolling Rock cans, chilled, for $9.99 at Wawa definitely helps calm the nerves a bit, as well.

Here’s mud in your eye.

Rob "drtorq" Reilly is an independent consultant, writer, and speaker specializing in Linux/OSS, physical computing, hardware hacking, the tech media, and the DIY/Maker movement. He provides a variety of engineering, business and special project services to individual clients and companies....
Read more from drtorq
Share this story
RELATED STORIES
Snack Stack: Detroit’s Best Dishes (Part 1) How Can Open Source Sustain Itself without Creating Burnout? The Future Stack of Code Review DevOps Is Dead. Embrace Platform Engineering How HashiCorp Does Site Reliability Engineering
Share this story
RELATED STORIES
Engineers Must Work With Product Managers for Success The Big Impact of Smalltalk: A 50th Anniversary Retrospective A Technical Guide to Burning Down a Troll Farm Why Jump from the Safety of a Big Tech Job into Risky Web3? How Idit Levine’s Athletic Past Fueled Solo.io‘s Startup
THE NEW STACK UPDATE A newsletter digest of the week’s most important stories & analyses.
We don't sell or share your email. By continuing, you agree to our Terms of Use and Privacy Policy.
TNS owner Insight Partners is an investor in: Shelf.