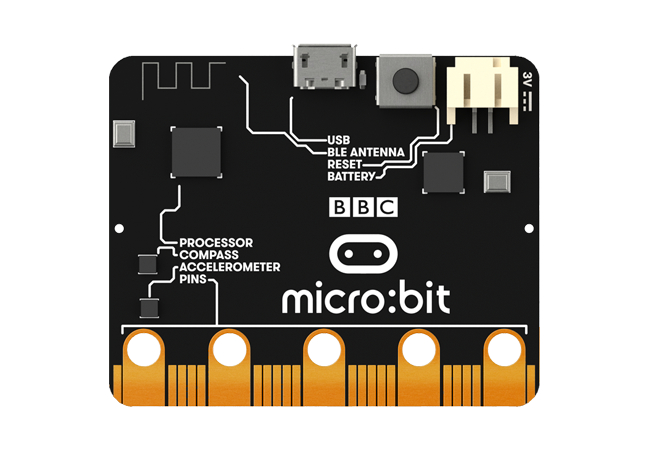 The micro:bit is a small ARM microcontroller developed by the BBC, along with a gaggle of technology giants, to give away to children in the United Kingdom to help them learning computing. The device was released to teachers in early 2016.

As a hardware hacker, I was curious about how this board compared to an Arduino or Raspberry Pi. As always, I also wanted to see how the micro:bit might play with a Linux notebook and if it had a place in the Off-The-Shelf hacker’s tool box.

The device is interesting and has some cool features. Let’s take a look.

The board fields a 16 MHz, 32-bit Arm Cortex-MO micro-controller, 256 KB of flash and 16 KB of static RAM. It also has a Bluetooth Low Energy radio onboard for local networking with a super phone or other Bluetooth-equipped device. There’s an additional ARM microcontroller that handles the USB connection and external power management. As an Inter-Integrated Circuit (I2C), it includes an NXP/Freescale MMA8652 three-axis accelerometer and a NXP/Freescale MAG3110 three-axis magnetometer. The front-end user interface is a 25 surface-mounted LED array (arranged in a 5 X 5 matrix) and two push buttons. The back side of the board has the micro-USB connector, a power/upload status LED, a reset button and an external 3.0-volt connector. 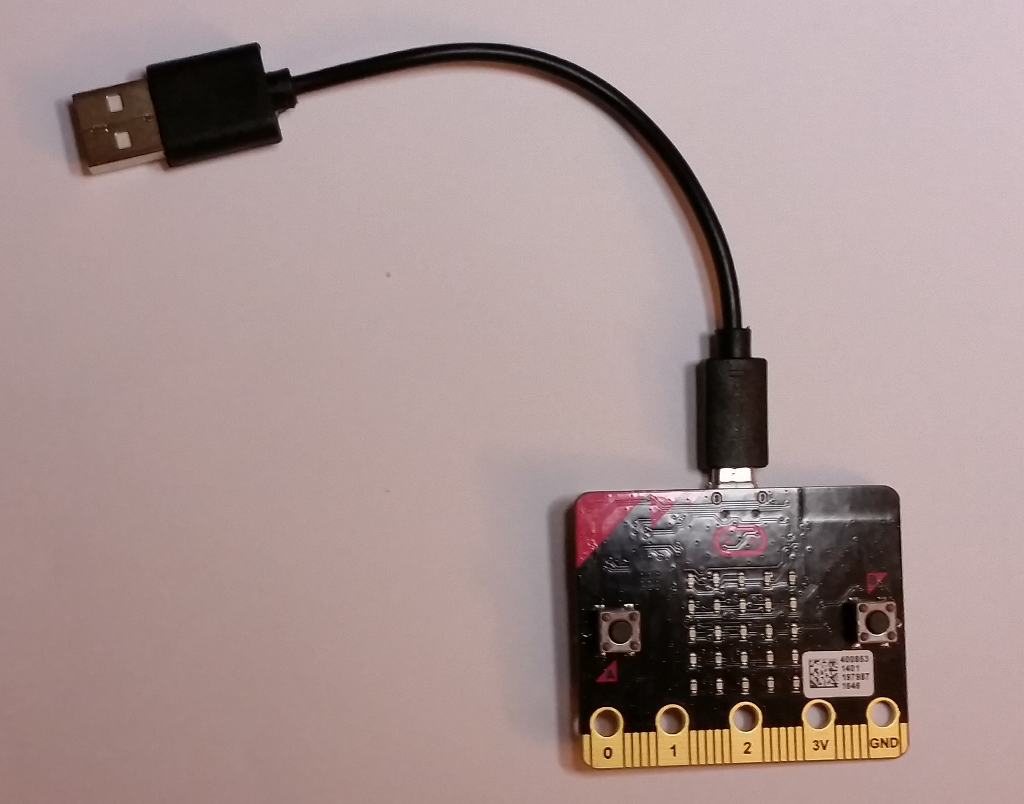 Front view of the micro:bit. 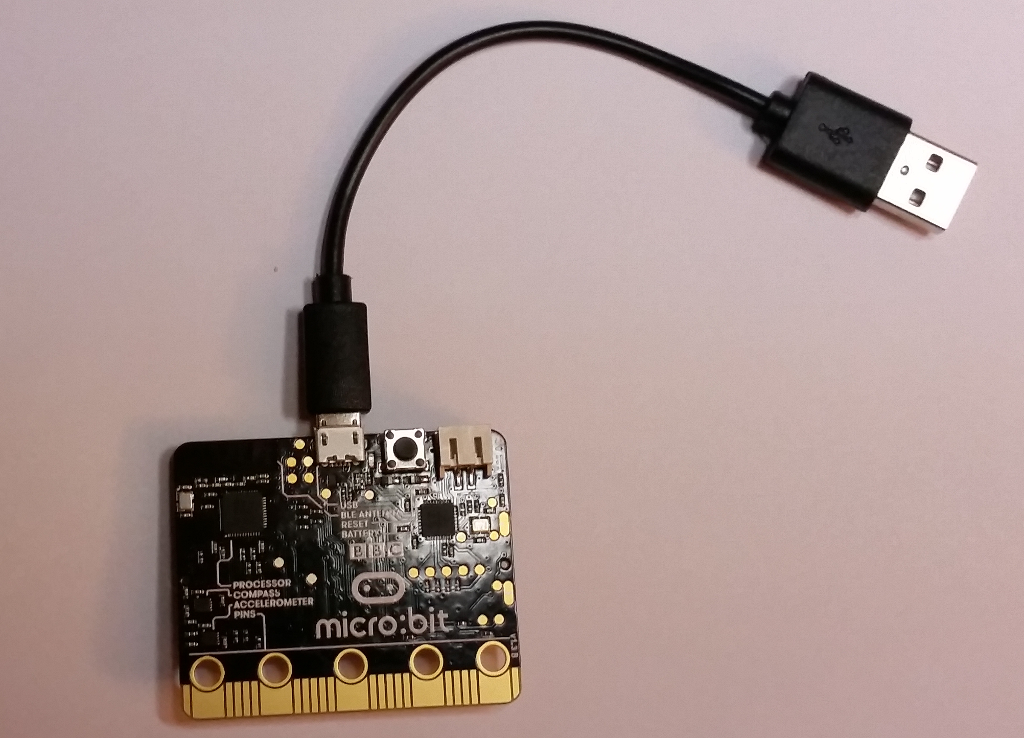 Back view of the micro:bit.

There’s also a 23-pin edge connector and 5-ring connectors. You can connect alligator clips or banana plugs to the ring connectors for simple projects.

The two right ring connectors are for +3.0 volts and ground. Pins 0, 1 and 2 serve as analog inputs, while the remaining 23 connectors function as GPIO, analog in, power, and ground pins. Some of the pins are shared with the onboard LEDS. Various pins also support I2C and SPI buses.

There’s a convenient help page describing the pins in much greater detail.

Recall that the Raspberry Pi is a multi-user, multi-tasking system. In contrast, the micro:bit is similar to the Arduino microcontroller. It’s doesn’t have a Linux operating system or micro-SD card. There isn’t a WiFi stack, either. Don’t let that put you off, it’s a nice little package with plenty of power and capabilities. Code development is handled on a notebook and uploaded to the micro:bit as firmware.

Several of the editors are visual-based, “slide the parts together” apps quite suitable and intuitive for children and beginners. They include:

I prefer traditional text editors, so fortunately, there are a couple of those, as well:

I’m somewhat familiar with Python, so that’s the one I used during this review. Here’s a screenshot of the requisite “Hello, World” script, with some additional code I snarfed from the reference manual. 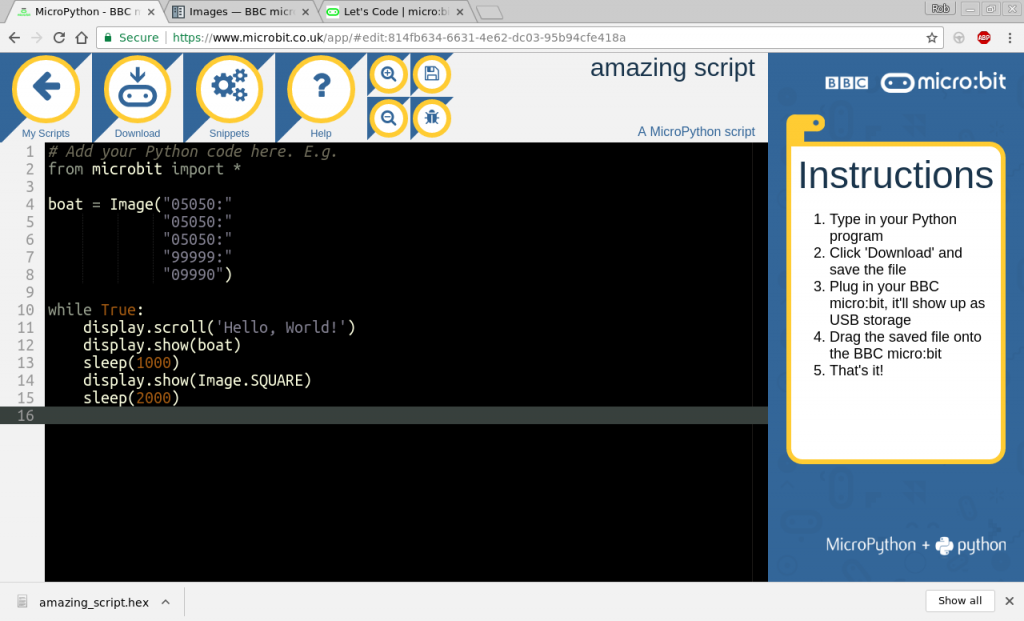 The Python Editor With My Code Additions

The MicroPython documentation is easy to use, comprehensive and full of useful code snippets. Start with the tutorial introduction page. There’s a handy index along the left side of the screen, that will take you to the various topics.

Once the code was finished, I simply clicked the “Download” button to compile everything into a .HEX file. The file then showed up in my /home/rob/Downloads directory. I used the provided USB cable to connect the micro:bit board to my Linux notebook and copied the file into the /media/rob/MICROBIT directory. Using the Thunar file manager application on Linux makes handling files a breeze.

After copying the file (uploading) to the MICROBIT directory, the board will reboot and run the script. If there is an error, a message will scroll across the LED array, pointing to the offending line in the code.

Even if you are used to working in the Arduino IDE ecosystem, I think the micro:bit shows a lot of promise as an easy-to-program micro-controller platform. Python is gaining in popularity on nano-sized systems. You may have already used Python with the Raspberry Pi.

And, I like the idea that you can simply compile the program and use a simple file copy to upload the firmware to the board. That’s a heck of a lot easier than the standard Arduino upload, particularly to ESP8266 boards.

While we didn’t get into general purpose input/output (GPIO) capabilities today, the micro:bit is a solid product and I’ll likely cover other details and features, in future articles.

Rob "drtorq" Reilly is an independent consultant, writer, and speaker specializing in Linux/OSS, physical computing, hardware hacking, the tech media, and the DIY/Maker movement. He provides a variety of engineering, business and special project services to individual clients and companies....
Read more from drtorq
SHARE THIS STORY
RELATED STORIES
OpenSSF Aimed to Stem Open Source Security Problems in 2022 Pinterest: Turbocharge Android Video with These Simple Steps JavaScript or WebAssembly: Which Is More Energy Efficient and Faster? Internal Developer Portals Can Do More than You Think AI21 Labs Bets on Accuracy, Develops Approach for Factual AI
TNS owner Insight Partners is an investor in: Shelf.
SHARE THIS STORY
RELATED STORIES
Poisoned Lolip0p PyPI Packages Rethinking Java @Scheduled Tasks in Kubernetes AI21 Labs Bets on Accuracy, Develops Approach for Factual AI Platform Engineers: Developers Are Your Customers Yes, Your Enterprise Needs Low Code Now
THE NEW STACK UPDATE A newsletter digest of the week’s most important stories & analyses.
The New stack does not sell your information or share it with unaffiliated third parties. By continuing, you agree to our Terms of Use and Privacy Policy.