Off-The-Shelf Hacker: And Now We Build the Steampunk Eyeball 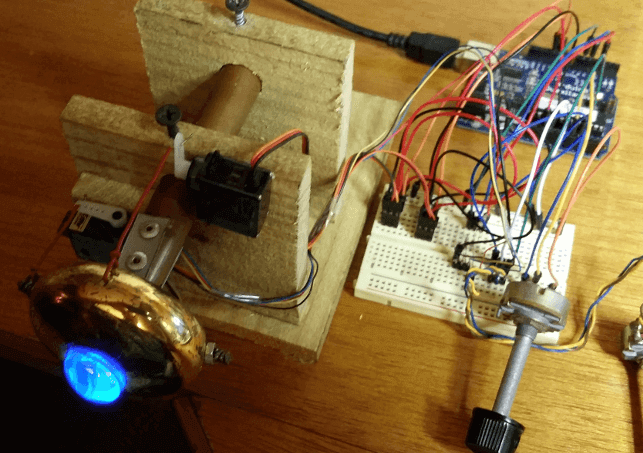 Last week, in Off-The-Shelf Hacker: Steampunk Eyeball Part 2, I talked about my “build, hack, mod, repeat” methodology for fast-moving prototype projects. And, so I launched into fabbing the copper sphere Y-axis pivot and hinged door on the back of the steampunk eye we are building. We discussed the preliminary design and details of the build. I also anticipated getting the half-hoop made, the servos and the Pixy mounted.

So, what held things up?

Yes, I’m slightly behind schedule. That’s OK; everybody runs into challenges, deadlines and unanticipated situations. Everything will come together, in due time.

I was able to make the hinges for the back-of-the-eye-ball door, then finish up cutting it out. Recall that I left three short solid sections along the cut, to mount the hinges and keep the door aligned. 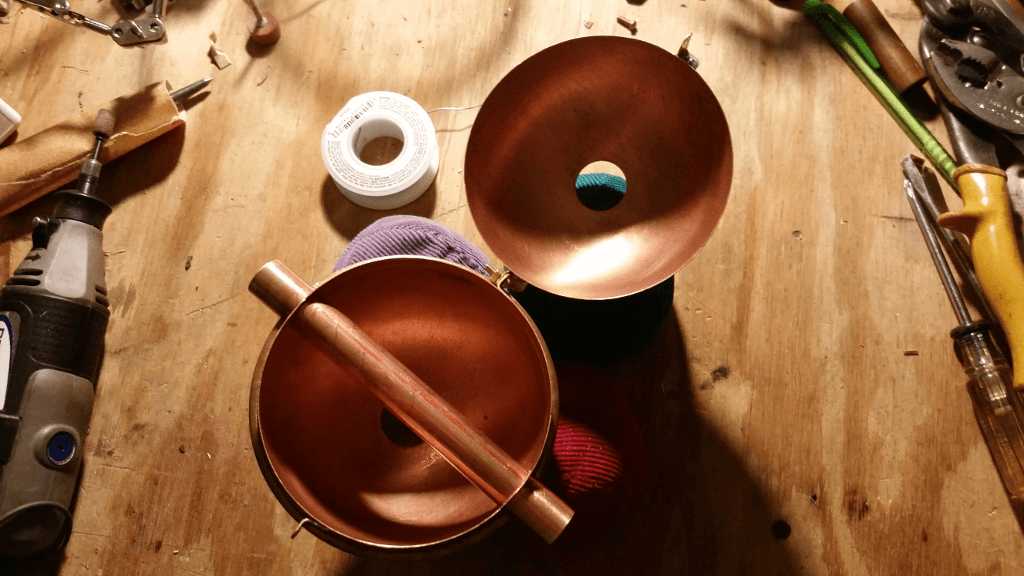 While soldering the hinges, I found that my tried-and-true 140-watt soldering gun was marginal for joining the hinge brackets to the copper sphere. The copper simply conducts heat away faster than I anticipated, resulting a “cold” or weak joint. It worked, but it’s not as smooth or clean as I’d like.

I considered bolting the hinges on, although that would add more weight and work. Using a urethane adhesive might work. Of course, that departs from the steampunk aesthetic of fine craftsmanship.

Perhaps, if I get a run of clients commissioning their own steampunk eyeballs, I’ll probably get a bigger soldering iron. Home Depot had a couple that looked like they’d work: 200-watt, 400-watt.

The sphere, all pivots, bushings and hinge brackets were deburred and smoothed. Copper and brass cuts take a while to heal and since I’ll be carrying the eyeball around, it made sense to knock all the sharp edges off, early on.

The Pixy camera was also test-fitted into the front hole. 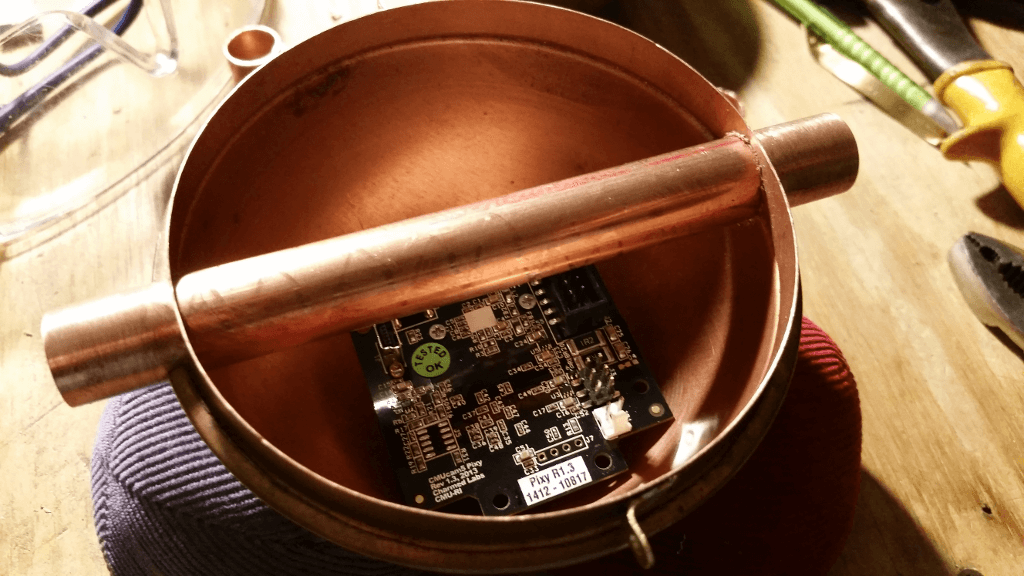 I wasn’t 100 percent sure if the curve was shallow enough for the camera lens to come out flush with the front of the eye. I probably could have measured the Pixy and the sphere and mocked up the two in a full-scale, two-dimensional drawing. I didn’t choose to do that. Maybe next time. I’ll make the camera mount adjustable, using 1” long 4-40 screws, nuts and washer. I want to be able to position it precisely in the middle of the front eye hole.

While looking for thin-wall brass tubing at Ace Hardware, I came across some copper unions. They were perfect for pivot bushings. I chose 1/2” copper pipe for both the tilt and pan pivot tubes. Neither the union nor pipe were perfectly round, so I spent considerable time with sand paper and a flexible, fine-grained sanding block to lap in the pivots and bushings for smooth operation. [See the tilt-axis pivot graphic]

I also recycled the 1st generation steampunk eyeball frame for use as a stand while I built the half-hoop. 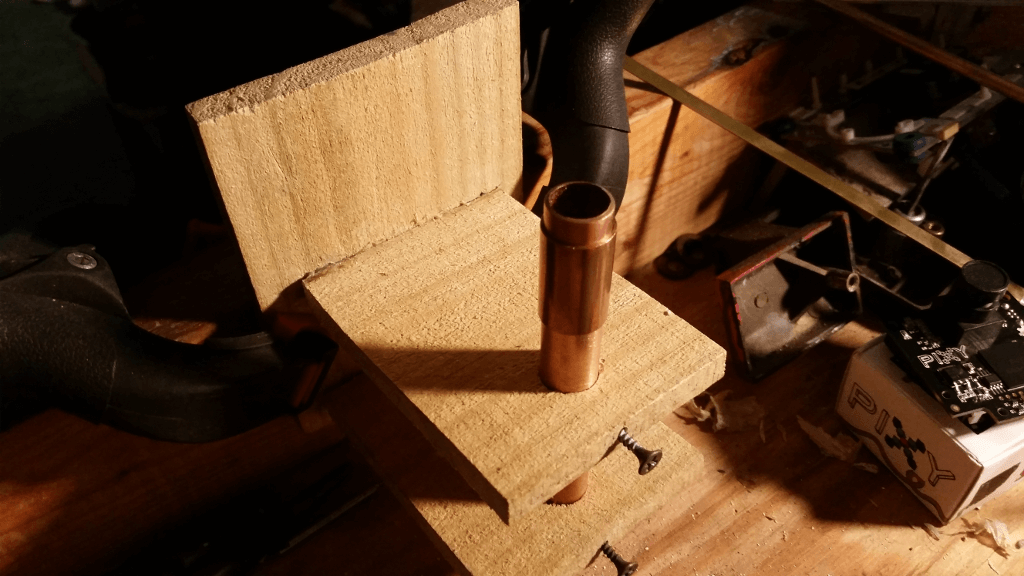 The servos on the 1st gen eye had to be removed anyway for use with the new steampunk eyeball.

I’m still up in the air whether I’ll put a servo inside the eyeball for the tilt-axis. Last week, I decided that the tilt servo should outside the eye and push-rod would connect to a bracket on the back of the sphere. Now, I feel it might be better to go back to my original plan, of putting the servo in the eye, because there may not be enough servo arm travel to move the eye noticeably, with the external arrangement. With an internal servo, I wouldn’t lose any travel because I wouldn’t use any levers.

The other thing is that I wanted to put the pan servo, in the same location (centered under the middle of the eye attached to the half-hoop) as the tilt servo. Putting the tilt servo inside the sphere solves that dilemma.

Then, there is the half-hoop. I’ll make it out of 1/4” thin wall brass tubing. I intended to use 3/16”, however, my two local sources were completely out. Must be RC-model airframe building season or something. I still plan to use a squared-off design, because fabrication is pretty straightforward and shouldn’t be too hard. My daughter recently bought me another “third-hand” rig, so that will come in handy.

The 1/2” copper tilt pivot, has to be securely fastened to the sphere, such that I can remove the center section. The center section is in the way of the camera board connectors and where the internal tilt servo will go. The challenge is that I want to keep the pivot axis, on both sides, in-line so there is no binding with the half-hoop bushings. If there is even slight binding, the pan and tilt action will stick or be jerky. I also want to keep the turning effort low, because I’m using micro servos, which don’t have a whole lot of turning torque. There’s a chance I’ll have to use bigger, more powerful servos. We’ll cross that bridge shortly. I’m allowing a little extra clearance between the eyeball sphere and half-hoop, just in case I need to super-size that servo. Internal bracing for the tilt pivot will probably end up being some kind of truss arrangement attached to the pivot and the 3/8” lip that runs around the back of the sphere. The sphere hinge brackets attached to the lip, as seen in the closeup. 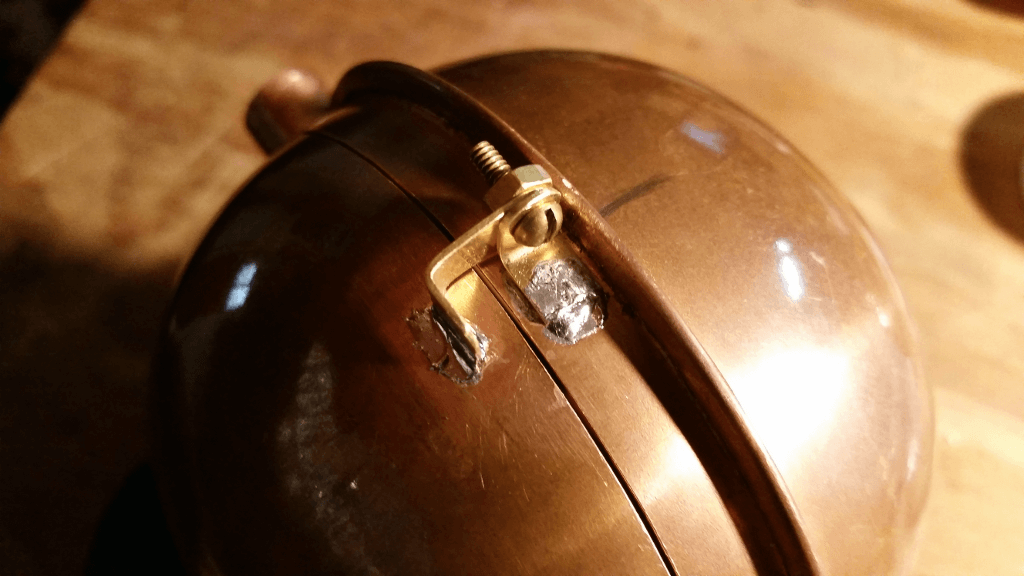 Coming Up Next Week

After this week’s deadline, I plan to get right on the half-hoop fabrication. There isn’t much planned at the Dr. Torq house this weekend, so I hope to see the eye pan and tilt by Monday. In Part 4, I’ll cover the rest of the mechanical aspects and start on the power, data and camera details. Naturally, there will be a section on using the Pixy’s color blob tracking capability and software.

Physical computing and hardware hacking are hard. Like my old Lockheed-Martin director used to say, “if it were that easy a fifth grader could do it.” Look around. There’s plenty of Raspberry Pi and Arduino projects that house everything in a cute little 3-D printed box. 3-D printers are awesome, and the productivity is very promising, particularly for low-volume prototyping. There’s also a lot of “blink the LED” beginner tutorials.

Developing physical computing technology and hacking it into real-life hardware, takes time and effort. I think the steampunk aesthetic adds authenticity and introduces a “curiosity” element into my projects. Are you applying your theme to your project?

I love physical computing and hacking hardware because I end up with something tangible for my effort that my speaking and writing audiences seem to enjoy. It’s a good feeling and perhaps will be insanely lucrative one of these days.

Rob "drtorq" Reilly is an independent consultant, writer, and speaker specializing in Linux/OSS, physical computing, hardware hacking, the tech media, and the DIY/Maker movement. He provides a variety of engineering, business and special project services to individual clients and companies....
Read more from drtorq
SHARE THIS STORY
RELATED STORIES
Netlify Acquires Gatsby, Its Struggling Jamstack Competitor Why Trust and Autonomy Matter for Cloud Optimization How to Get Started Filling 3.4 Million Cybersecurity Jobs Anil Dash on Mastodon Joining Fastly’s Open Source Program 5 Security Principles to Guide Your DevSecOps Journey
TNS owner Insight Partners is an investor in: Shelf, Torq.
SHARE THIS STORY
RELATED STORIES
OpenSSF Aimed to Stem Open Source Security Problems in 2022 Poisoned Lolip0p PyPI Packages Boost Customer Engagement with Real-Time Data Improve the Quality of Your APIs with Spectral Linting Netlify Acquires Gatsby, Its Struggling Jamstack Competitor
THE NEW STACK UPDATE A newsletter digest of the week’s most important stories & analyses.
The New stack does not sell your information or share it with unaffiliated third parties. By continuing, you agree to our Terms of Use and Privacy Policy.