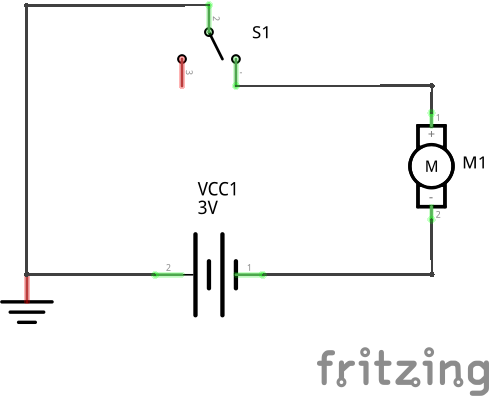 Physical computing hackers need to be able to read and create schematics. It’s a required skill.

Wiring layouts, electronic components, sensors, motor drivers, power supplies and other connections need to be documented. It’s great to have a record of your device, so you can sell the plans, write up your project or just recall your gadget’s fabrication details, from a month ago. Being able to read schematics also comes in handy when you’re adding Internet of Things (IoT) capabilities to existing home appliances and when I write a new Off-The-Shelf Hacker story.

Like everything else, reading and drawing schematics is a skill that’s not hard to learn, once you get the hang of it.

Schematics are the symbolic wiring road maps of electronic devices. The job of the schematic is to show you how to hook everything up. Over the years, universally understood symbols and practices have evolved, so regardless of industry or business, if you can read one, you can read them all.

Here’s a schematic of my Steampunk Name Badge: 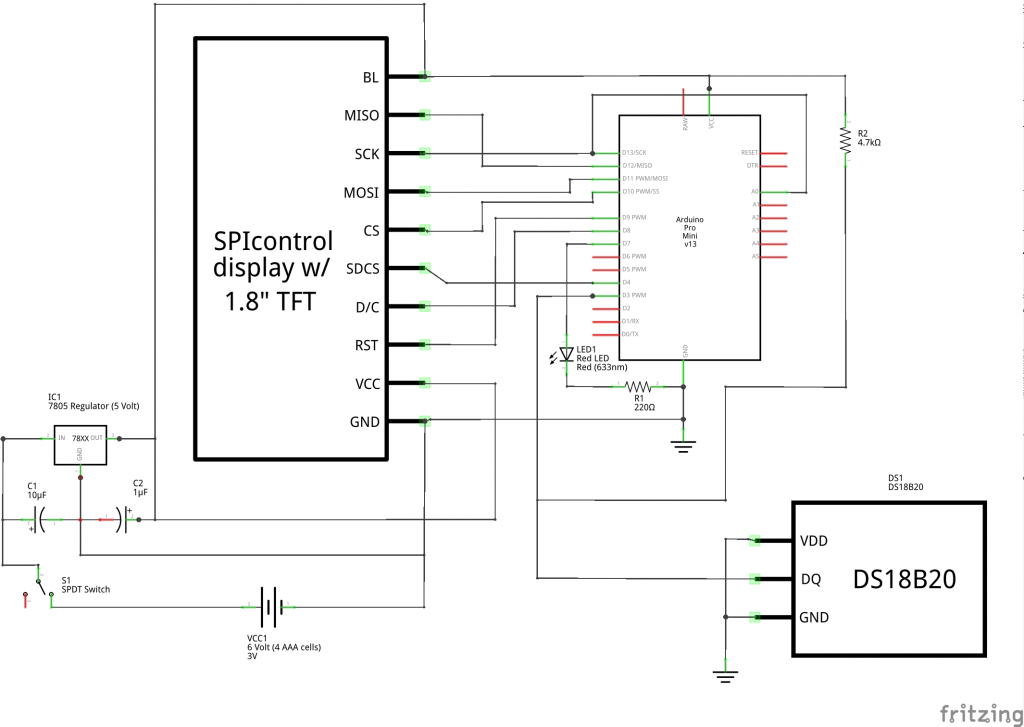 The parts include an Arduino Pro-Mini micro-controller, a 1.8” color TFT LCD display, a DS18B20 digital temperature sensor, a 7805 voltage regulator, a 6-volt battery, several resistors, a couple of capacitors, a red LED and an SPDT switch.

There are all those parts on the schematic. That’s not so bad, is it?

Let’s go into a little more detail with some of the parts.

Wire are represented as lines, in a schematic. You can see them in the example connecting the various discrete parts together. We’d like to route the wires as conveniently, as possible, while still making the connections (and schematic) readable. It’s also good to use straight X-Y orientations. Angled lines are fine and there is one or two of them, in the example. It’s good practice to try to minimize angled lines, in the interest of clarity.

Crossing wires are another aspect, of which you should be aware. A crossed wire, that’s connected is highlighted with a dot. A crossed wire that’s not connected is shown without a dot. Older schematics frequently show a crossed wire with a little hump, like one wire is bent up and over another wire. That style of crossed wires isn’t seen as much anymore.

Although the thickness of the line can denote the wire size, all wires in a schematic are usually drawn with the same thickness. A note on the drawing and reference in the bill of materials is the place to find the specifics for a wire.

Likewise, colored wires are not normally used in a schematic.

A resistor is represented on a schematic as a short sawtooth shape with a straight wire on each end. Resistor #1 (R1), in the example, is a 220 Ohm part, where resistor #2 (R2) is a 4.7K Ohm part. Notice that the resistor value is close to each resistor, along with its number. These correspond to values in a parts list and bill of material.

Schematics get a little tricky, with microcontrollers, integrated circuits and specialty devices.

The example schematic abstracts the Arduino micro-controller into a single module, just showing the inputs, outputs, power and communications connections. In fact, the Arduino has its own schematic, with the microprocessor, crystal, capacitors, resistors, LEDs and so on.

For our purposes, it’s OK to represent an Arduino as a “module” of components. We don’t really need to know what all is on the Arduino board when used in a larger project. Including our Arduino Pro-Mini board’s schematic in our project would complicate the whole drawing and is unnecessary. Abstract your devices to just include external connections, in the interest of readability and simplicity.

The same goes for integrated circuits and system-on-chips (SoC). Those devices generally are abstracted up, so only external connections to the device are shown, as well. The color TFT LCD display is a good example.

Transistors are still common, in projects. Many times they are used as amplifiers or switches and are shown as a circle with three wires coming out of the device. The wires are labeled the base, collector and emitter. The arrow part of the component metaphorically means it’s a semiconductor.

Being a semiconductor, much like a transistor, the LED symbol is a vertical line with a wire on one side and an arrow on the other:

You’ll also notice the DS18B20 digital temperature sensor. It has three connections, just like a transistor. It is even commonly packaged in a TO-92 case, which is also frequently used to house transistors. Having a good magnifying glass keeps you from getting them mixed up. The internal circuitry consists of a number of different components and is much more complicated than a simple transistor. A no-frills square box, with three wires and appropriate labeling, is perfectly adequate for our purposes.

Grounds, the common and the negative side of the power supply (usually) are represented with a series of large to small horizontal lines, with a wire out the top. Two ground symbols appear in the example schematic. It’s customary to use the ground symbol as a shortcut for the common, negative side of the voltage connection. That way you don’t have the ground or common wire running all over the place, even though that might actually be the case, physically.

We’ve explored schematics basics and talked about some of the practices and traditions used to draw them. I frequently draw a quick schematic, on paper, as I prototype a project. It’s good practice and you should try drawing a few schematics for your own projects. You have the required basics.

Naturally, there is a better way and it’s called Fritzing. This desktop application runs on Linux, Windows and Mac machines. It’s basically a graphics editor for electronics projects. Not only can you draw schematics with Fritzing, it also has breadboard and printed circuit board views. The three views are cross-referenced, so the symbolic and physical connections are always synced up. Draw in one mode and it shows up in the other. Pretty cool.

Install Fritzing on your machine and come back in a couple of weeks for a tutorial.

Rob "drtorq" Reilly is an independent consultant, writer, and speaker specializing in Linux/OSS, physical computing, hardware hacking, the tech media, and the DIY/Maker movement. He provides a variety of engineering, business and special project services to individual clients and companies....
Read more from drtorq
SHARE THIS STORY
RELATED STORIES
How to Get Started Filling 3.4 Million Cybersecurity Jobs Anil Dash on Mastodon Joining Fastly’s Open Source Program Learning Storage and Retrieval with a Hash Function Azure Went Dark A Platform Team Product Manager Determines DevOps Success
TNS owner Insight Partners is an investor in: Shelf.
SHARE THIS STORY
RELATED STORIES
Entrepreneurship for Engineers: Avoiding Feature Bloat Why Trust and Autonomy Matter for Cloud Optimization Qlik Plans to Acquire Talend. Is it a Data Management Double-Dip? Generative AI: How Companies Are Using and Scaling AI Models 5 Security Principles to Guide Your DevSecOps Journey
THE NEW STACK UPDATE A newsletter digest of the week’s most important stories & analyses.
The New stack does not sell your information or share it with unaffiliated third parties. By continuing, you agree to our Terms of Use and Privacy Policy.