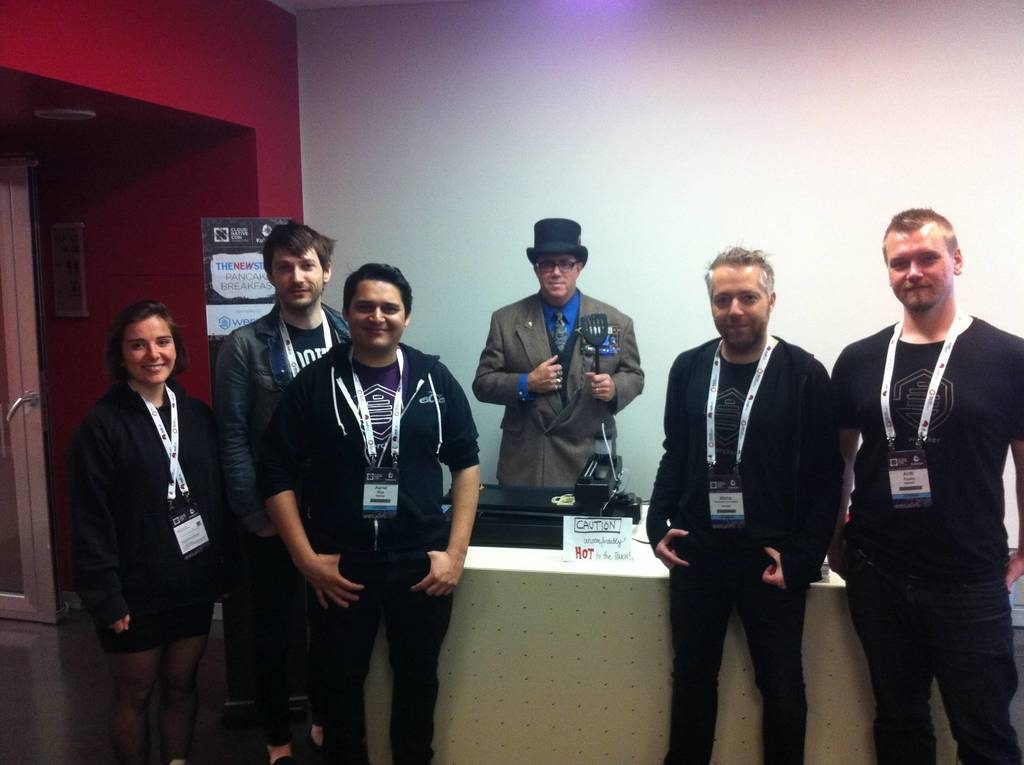 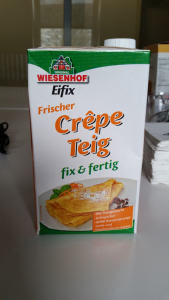 “What about the griddle?” That was one of the first questions I had when asked to run The New Stack’s PancakeBot — which we nicknamed “Stackie” — in Berlin this week, for the KubeCon conference. Readers may recall that Stackie helps warm up (yes, a bad pun) the crowd at our frequent conference pancake breakfasts and podcasts.

U.S. appliances, including Stackie, run on 110-volt 60 Hz power, while everything in the rest of the world runs on 220 to 240 volts at 50 Hz Stackie actually has two power inputs. Stackie’s griddle, which obviously draws considerable power, runs on 110 volts. There’s also the control electronics, directing the stepper motors, the vacuum/pressure pump and so on. The microcontroller power supply for the electronics handles both 110- and 220-240-volt 50/60 Hz, automatically. Most modern electronics are dual-voltage, including my 10-year old ASUS Linux notebook, as well as, my two-year-old (paid off) Galaxy 5S Active super phone.

A few world travelers I’ve talked to said just to get a plug adapter. While that will work for the dual voltage electronics, you should never plug in a high-wattage 110-volt appliance to a 220-volt outlet. The results could be exciting and short-lived. I did actually buy some plug adapters for my Galaxy phone, the Linux notebook and other dual-voltage devices. They worked like a charm.

After some research, I narrowed the griddle problem down to three choices.

1. Use a power converter

These devices convert the power from 220 to 110, so I could just plug in the U.S.-voltage griddle. The inexpensive ones only handle about 200 watts. Some go up to 1,500 watts or so. Problem is that while your hair dryer might work with these things, a continuously operating griddle, at 1,500 watts would eventually overheat the device and probably cause it to fail or at least shutdown. They are not robust enough for our purposes.

The more expensive continuous-duty converters have voltage stabilization and are available for 5000-watt requirements and above.

Sadly, there are two problems with high-powered converter approach. First is the cost. You’re talking around $130 for a spiffy unit. The other concern is the weight. A 2,000-watt unit weighs around 22 lbs. That’s a lot of extra weight, for one person to manage from Orlando to Berlin. Don’t forget that I’ll be taking Stackie in its shipping box, as well as my bullet-proof Asus Linux notebook, backpack (with adapters, chargers, cords, tape, etc.), some tools, spare parts, all the support gear (pancake mix, spatula, measuring cup, etc.), a box of pancake mix and my suitcase with clothes. The logistics of just getting everything from the hotel to the venue, three blocks away is a feat in itself. Believe me, 22 extra pounds of gear is a big deal. 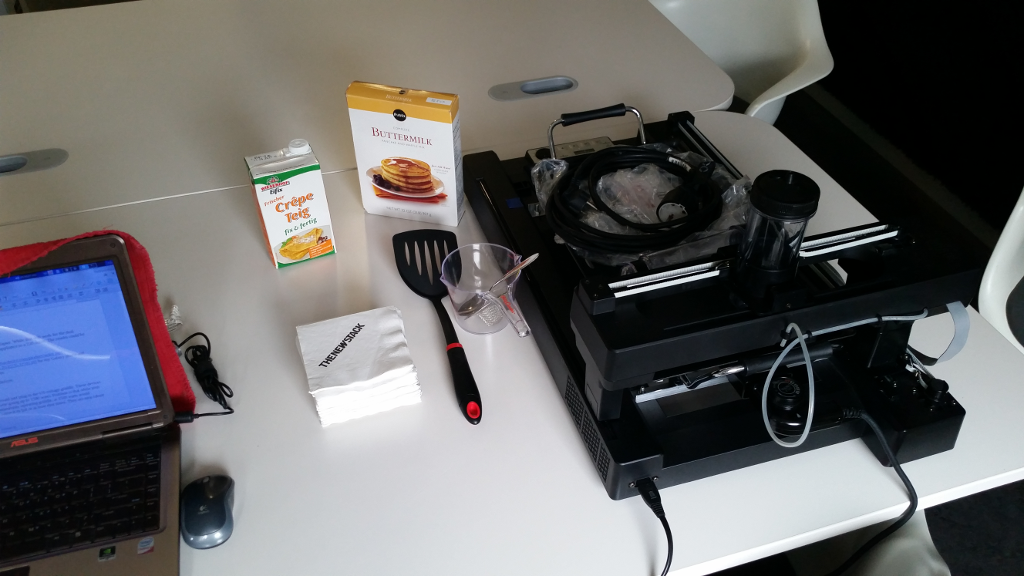 Speaking of transformers, I could have just ordered one of those. They are available from 200 to 5,000 watts. A 2,000-watt device suitable for use with Stackie’s U.S.-voltage capable griddle was a real bargain at around $55. But again, that 24 lb. lump of steel and copper was not going to make life easy going through the airport or shuttling back and forth to the venue. Plus, where would you put something that heavy in your luggage? We’re talking about a 50 lb. limit per bag. After that, the price goes up.

This is the route I chose to take bringing Stackie to Berlin. The 220-Electronics store stocks all manner of 220-volt products. I ordered a Black & Decker hot plate, thinking (knowing?) that it would probably work in Europe. A 220-volt griddle doesn’t need any conversions to work. You just plug it in and you can start cooking pancakes immediately. Right?

First off, right after ordering the Black & Decker model, an email promptly arrived saying they were out of stock. The company wouldn’t have any until the day of our event. Oops. Fortunately, Black & Decker could send me a similar model for $15 more. Total cost was $98, with the shipping.

When the thing arrived via UPS, I discovered that it had a 220-volt plug, for the United Kingdom, after specifically asking on-the-phone if it would work in Germany. I needed a Berlin-capable plug. So, back to Amazon, using next day shipment, I bought a slick universal adapter to make it work: 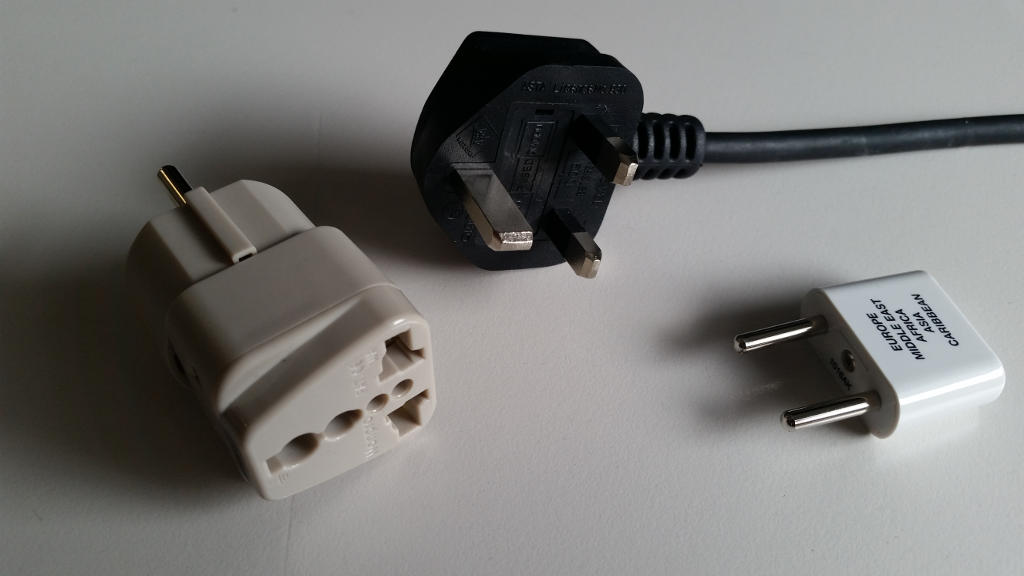 With the electronics squared away, I turned my attention to adapting the 220-volt griddle to Stackie.

Actually, it wasn’t that hard. The 220-volt griddle was a little narrower in both length and width than the original PancakeBot hot plate. Hot plate to batter dispenser tip was the same. I had to get a couple of pieces of aluminum angle stock, cut them to the proper length and then drill some holes, so I could position the griddle under Stackie’s batter dispenser: 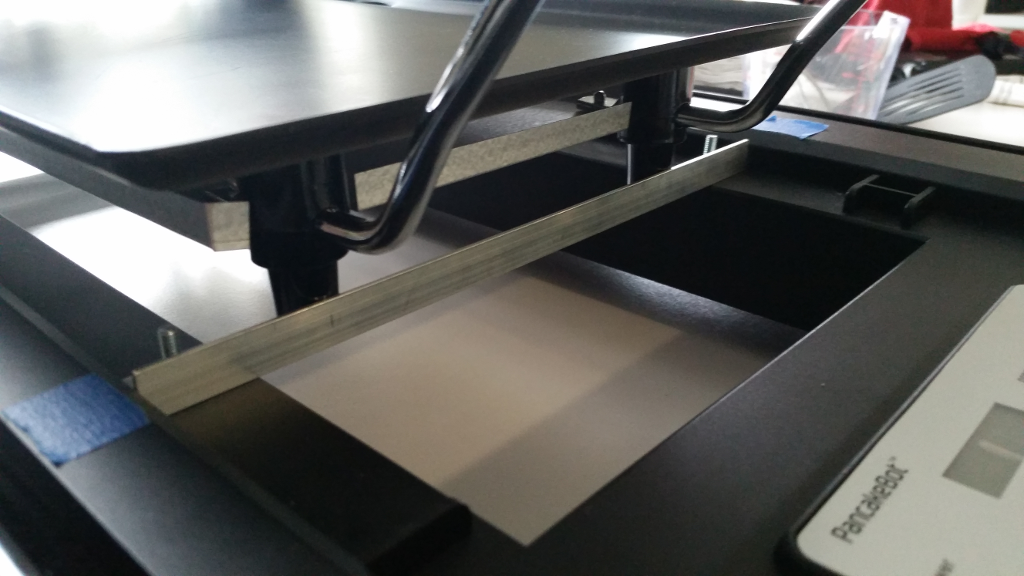 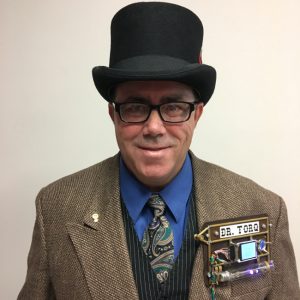 You’ll be happy to know that when 7:30 Wednesday morning rolled around, Stackie was turning out printed pancakes, without any major issues. The griddle worked…well…mostly. The griddle-end power connector has some terminals inside that I’ll have to take apart and tweak. Sometimes, the griddle wasn’t hot, so I’d have to jiggle the connector to get it going again.

At the event itself, I was dressed in Steampunk, with my Conference Personality Identification Device, coat, vest, trousers and top hat. Also, wore “Dr. Torq” stylized Cons (a Christmas present from one of my daughters) and my 3 skull rings. It’s all good for the show and people seem to get a kick out of the quirkiness.

Attendees to TheNewStack’s pancake breakfast liked to see Stackie. They get a kick out of seeing it work. Through a bit of off-the-shelf hacking, flipping pancakes in Berlin turned into a pretty good success.

Rob "drtorq" Reilly is an independent consultant, writer, and speaker specializing in Linux/OSS, physical computing, hardware hacking, the tech media, and the DIY/Maker movement. He provides a variety of engineering, business and special project services to individual clients and companies....
Read more from drtorq
SHARE THIS STORY
RELATED STORIES
4 Ways Quotas Protect Your Organization from Observability Data Explosions Grafana Shows New Observability Projects at ObservabilityCON Discord vs. Slack: Which Is Right for Your Team? How Paylocity Scaled Up Community in the Cloud with MongoDB Red Hat Helps Make Kubernetes Security More Accessible
TNS owner Insight Partners is an investor in: Shelf, Torq, The New Stack.
SHARE THIS STORY
RELATED STORIES
The Dropbox GitHub Data Breach Case Study: How Dell Technologies Is Building a DevRel Team Oxeye Finds Bad Spotify Backstage JavaScript Vulnerability Pre-Labeled Datasets Are Key to Building High-Quality ML Models Jamstack Panel: Multiple JavaScript Frameworks Are a Good Thing
THE NEW STACK UPDATE A newsletter digest of the week’s most important stories & analyses.
The New stack does not sell your information or share it with unaffiliated third parties. By continuing, you agree to our Terms of Use and Privacy Policy.