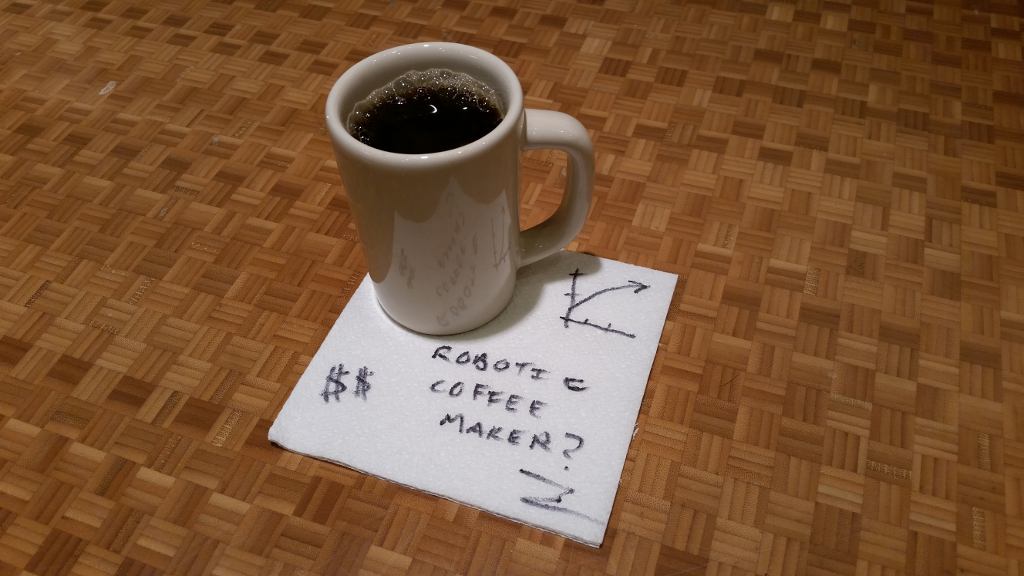 A request recently surfaced, over dinner, to develop a robotic coffee making machine. We needed something to compliment “Stackie,” The New Stack’s PancakeBot, a 3D pancake printer used to promote podcasts and pancake breakfasts at conferences. Pairing an attention-grabbing, automated, coffee delivery gadget with Stackie could help get people going and spark conversations at early morning podcast panel discussions.

Turning this hazy notion into a working physical computing contraption is the challenge.

Consciously or otherwise, I always go through the following steps on the way to a functional working minimum viable prototype (MVP):

Keep in mind that the process frequently oscillates between topics and is certainly not a linear process. Give yourself the liberty to dream and roll ideas around in your head, as you move through the various steps in the process. Get into the habit of recording your thoughts in a “hacker notebook.” Record ideas, conversations, designs and take notes. Use that high-resolution camera on your super phone. Many of the pictures in my stories come from snapping a quick picture with my phone during the exploration as well as the build phases of a project.

Can We Mod Something?

Solid research and brainstorming dictate that we check and see if there’s an existing gadget out in the world that might fill the bill. Using “prior art” is a time-honored hacking tradition. While the Web may or may not bring a perfect or even possible solution, exploring products and other people’s inventions is a great way to help you brainstorm designs and consider possibilities. Make sure to jot down notes and thumbnail drawings in your hacker notebook, so you don’t forget something interesting.

Coffee robots have been in the public’s consciousness lately. For example, CNET had a story about the coffee serving bots at the 2017 Consumer Electronics Show in January. Bosch, Aubo and Denso used big arms and various interfaces to make coffee for attendees. Those machines are just a little too far out there to mate with our humble Stackie pancake printer.

Hackaday ran a piece about some guys at the Ohio State Hack OHI/O 24-hour Hackathon who built a cute little coffee robot with a couple of servos, a Raspberry Pi and an Arduino. They plan to integrate Alexa into the device at some point. The machine has a face on the top and the lid automatically opens, kind of like a mouth. It also inserts the filter into the machine, with a servo, so the design is a little closer to what I think we want.

Over at Hackster community forum, some users demonstrated an Alexa directed coffee machine that actually works. They used a Raspberry Pi and a Philips Senseo coffee machine. The build was pretty complicated and required considerable hacking between the Pi and the circuit boards inside the Senseo. They did a fine job, although I think we want something that’s a little more animated.

During my preliminary research, I had a flash of inspiration for a coffee pouring arm. Below is a drawing of an idea for an arm, that would swing and tilt a carafe, using an existing commercial drip brew coffee maker. The arm could insert/remove the filter, as well.

My mind also wandered into a cup height measuring “fence” using photo-diodes (as sensors) and LEDs (as the beam). The ideas went into my notebook.

Other than the above examples, there wasn’t really much to see, in my cursory search through Google. I also couldn’t find any functioning Steampunk robotic coffee machines. Steampunk attracts attention. We have to have Steampunk!

Creating something from a blank sheet, or this case, a napkin with a question on it, can lead to “possibility paralysis.” My mind flies all over the place and it’s hard to imagine the MVP. We certainly can’t spend forever dreaming about what might be. Well…I guess we can. Sooner or later though, we have to screw the pieces together and demo our creation in front of people. That next pancake podcast is right around the corner.

As always, it’s smart to write down what we are trying to accomplish. Yup, back to a list. Lists narrow our scope into something manageable and more importantly, do-able. Break the list into several topics, to get as specific as practical.

Here’s my first cut at the coffee making bot list:

I’m not quite ready to clear the workbench and start soldering wires and brass tubing together.

Looking at how other people built their coffee bots and outlining our general requirements is crucial to narrowing the scope before we build.

You also need to know about available parts useful for the build. Clearly, I’ll use an Arduino, a Raspberry Pi or perhaps a BeagleBone Black board as the microcontroller. I need to have a continuously updated mental inventory of usable raw materials. This is one reason I aimlessly walk the aisles at Home Depot, Ace Hardware and the community thrift stores. I may just come across something I can use immediately or in a future project. It’s an ongoing habit of the Off-The-Shelf Hacker.

I thought about buying a cheapo drip coffee maker, taking the guts out of the case and engineering a new Steampunk enclosure, incorporating the robotic arm. The arm might come from a past Off-The-Shelf Hacker project.

Black & Decker makes two similar products, models BCM1411B and the CM1160B for the U.S. and European markets. Their functions are similar and likely much the same under the hood. It might be possible to just swap out the heating element, depending on where we’d use the coffee bot.

I’ll likely hack the commercial parts into a custom Steampunk case, possibly with a moving arm, so making things interchangeable (for 110 or 220-volt operation) is a pretty easy requirement to accommodate.

Another possibility is to research bare coffee maker components, from Chinese manufacturers and just build the Steampunk case and arm around those parts. We probably won’t go down this road.

Now it’s time to let the ideas brewing for a bit. The next coffee bot column will wrap up the brainstorming/research phase and move into design decisions and layout.