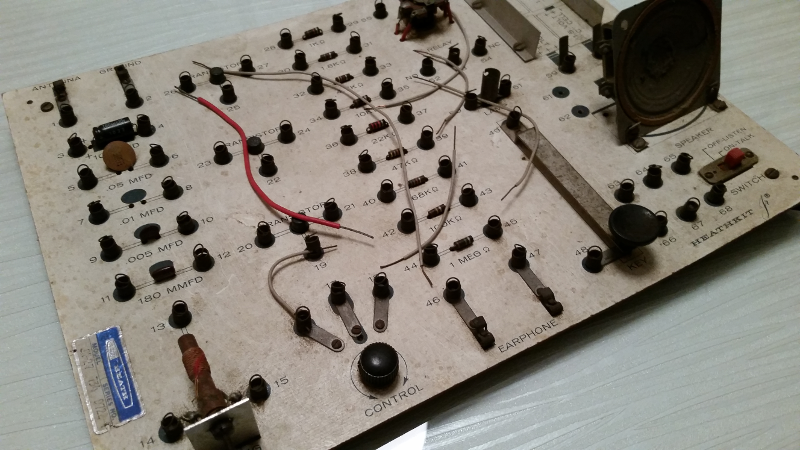 Tech is just as fascinating today as it was when I was a curious young lad, many, many moons ago. Now is always the best day — ever — to be an off-the-shelf hacker.

One Christmas, a few decades back, I woke up at 4:00 a.m. and discovered a Heathkit electronics project board under the tree. Needless to say, a few hours later the transistors, resistors, capacitors and such were assembled and I was hard at work on the first project. In spite of the snow and darkness outside, the future was bright and seemingly limitless.

I recalled the memory in more detail, back in a 2005 year-end story titled, “Editors Note: Christmas, The Moon, and The Future” on LinuxToday.

Do people still even use transistors, resistors and capacitors?

Of course, they do.

Hacking cool stuff, with parts, never falls out of fashion.

I think one of the biggest trends of 2015 was the ramp up of vendors selling all manner of components, chips, boards, parts and gadgets. Part of the inspiration for the OTS Hacker column came from the galactic change in parts availability. You can get absolutely anything you need…on the Internet. Cost definitely isn’t a barrier to prototyping the project of your dreams.

Go see for yourself. Adafruit, Sparkfun, Element14, Banggood and a whole host of other vendors have a countless assortment of parts. In a pinch, your corner Radio Shack could possibly even have what you need.

Yes, we still need external components to interface the microcontrollers and system on chips (SoCs) to the sensors, motors, relays, solenoids and power supplies hooked up to the load-moving and getting-work-done parts of a project.

Introducing readers to what might seem like arcane and old-school parts and techniques are, indeed, important topics in the physical computing World.

I hear you saying “OK, Dr. Torq, so the components are important, what about the computing parts?”

Clearly, the microcontroller and NanoLinux landscape also changed radically in 2015.

While a few inquisitive souls, still build their computers from individual components, like transistors, resistors and capacitors, OTS Hackers know that abstracting the hardware up a level and using a microcontroller module or a system on a chip (SoC) is the hot ticket to building something you can demo quickly. 2015 certainly brought out some extremely powerful new designs.

My current favorite, the Raspberry Pi 2 model B appeared last February. It features a quad-core ARM chip, a Gig of memory, four USB ports, an Aethernet port and much-improved power management over previous models. All this hardware goodness lives on a credit card-sized board that runs Linux. I recently used a Pi 2 for my LibreOffice slides at Fossetcon. Who needs a laptop for presenting a talk anymore? I even did a few last minute slide edits, on stage, before the audience came in for my session. Worked great, with no fuss. I could have just as easily run the little slide machine on batteries. And, I’m confident it would have worked the entire 45 minutes.

There’s also the $9 CHIP computer. This marvel of engineering sports a 1.0 GHz R8 ARM processor with 512MB of RAM, 4GB of NAND storage, WiFi and Bluetooth built-in. It’s a slightly smaller than the Raspberry Pi. First orders went out last September. I’m hoping to have one in mid-January. The CHIP also runs Linux. Look for coverage as soon as I get one in my mitts.

Not to be left out of the micro-controller horsepower race, the Arduino Zero uses an Atmel SAMD21 MCU, featuring a 32-bit ARM Cortex M0+ core. You use the standard Arduino IDE to program the thing and it’s designed for extreme robotics, IoT devices and smart wearables. In my opinion, it’s a little pricey, at around $50, so we’ll have to see how it sells, as we move into 2016.

Lastly, although the ESP8266 first came out in 2014, somewhere along the line in 2015, this tiny 32-bit RISC microcontroller was married to the Arduino IDE. Oh, yeah, there’s also built-in WiFi. Since then, the Internet has exploded with projects and vendors peddling these devices. There are about a dozen different versions with various GPIO pinouts, antenna options and physical footprints. None is more than about 1-inch square. Best of all, they’re almost giving them away. I ordered three ESP8266-01 chips, a few days ago, for $3.13 apiece.

Anybody can build awesome WiFi-connected projects for that price.

Linux is all over physical computing devices. I’ve used Linux on notebooks for 15 years. The Internet, big search engines, the cloud and enterprise computing depend on Linux to keep our tech World humming happily along.

Take a minute and wrap your head around the idea of a complete Linux environment on a board the size of a credit card. The mind boggles. Can you feel my late ’60s space-race enthusiasm vibe?

You can basically use any programming language, you like, to code up a project. Thousands and thousands of free applications and programs are available, for just about any conceivable job, using a simple “apt-get” and a connection to the Internet. Jobs can be scheduled to run at certain times and even be kicked off remotely, over SSH. There are also countless servers, databases, frameworks and one-off tools for you to explore in your quest for physical computing World domination.

On top of all that, these minuscule machines run for hours on a tiny battery pack or forever on a 5-volt cell phone charger. They go from about $35 on down.

Skill building is a big part of OTS Hacker and we talked about learning to solder, a few weeks ago.

Documenting your electronic designs, so you can build version 2.0 the next time around, seems pretty important. Fritzing is a great application to learn for drawing schematics. Look for a story, in the next few weeks.

Hopefully, there’s a Pine64 module, winding its way to my house. This monster is a 64-bit, Linux nano-system on a board the size of a Pi and priced at $15. Look for a review as soon as it lands on my front step.

Don’t worry, we’ll still cover micro-controllers, programming, sensors and actuators. My plan it to begin exploring the mechanical, electronic, software/firmware, fabrication and logistical aspects of prototyping projects, as well. Maybe we can integrate a few levers, gears and other physical parts into useful gadgets.

Remember, I think the physical computing stack is a bigger tent than even the LAMP stack.

Helping readers tie the theory to real-World physical projects that solve interesting problems, is the essence of the OTS Hacker column. As you would expect, Steampunk will figure prominently, in that formula, because everybody seems to like the aesthetic, it allows lots of creative license and is just good, clean fun.

I see Steampunk as a great metaphor for the physical computing stack OTS Hacker. Perhaps I’m a bit OCD about it. Works for me.

Oh, yeah, my wife ordered a 3.5-inch color TFT touch screen for me, this year. And, my brother assured me that my new black top hat was on the way.

Being able to recall fond memories of the past and believe in a bright future, as a perpetual starry-eyed techno-geek, makes this my favorite time of year.

Rob "drtorq" Reilly is an independent consultant, writer, and speaker specializing in Linux/OSS, physical computing, hardware hacking, the tech media, and the DIY/Maker movement. He provides a variety of engineering, business and special project services to individual clients and companies....
Read more from drtorq
Share this story
RELATED STORIES
The Big Impact of Smalltalk: A 50th Anniversary Retrospective Platform Engineering: The Path to DevOps Success How Is Platform Engineering Different from DevOps and SRE? Snack Stack: Detroit’s Best Dishes (Part 1) One Man's Dream to Build a Working SpaceX-Style Model Rocket
Share this story
RELATED STORIES
Engineers Must Work With Product Managers for Success A Technical Guide to Burning Down a Troll Farm How Can Open Source Sustain Itself without Creating Burnout? Platform Engineering Is DevOps Evolved, New Report Shows The Big Impact of Smalltalk: A 50th Anniversary Retrospective
THE NEW STACK UPDATE A newsletter digest of the week’s most important stories & analyses.
We don't sell or share your email. By continuing, you agree to our Terms of Use and Privacy Policy.
TNS owner Insight Partners is an investor in: Torq.