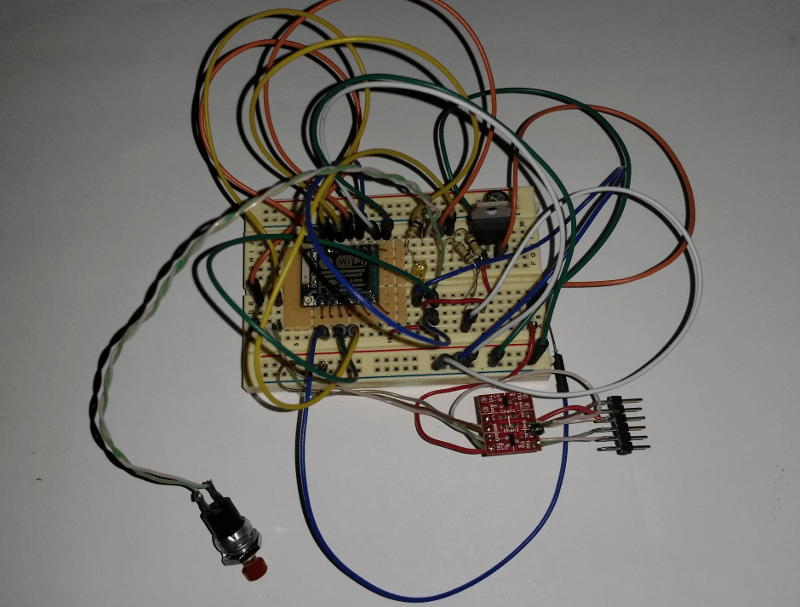 With all the talk of the Internet of Things (IoT), the ESP8266 WiFi system-on-a-chip (SoC) is certainly a good candidate for those types of projects. It’s fairly easy to program, has a small physical footprint and is inexpensive. IoT applications for the ESP8266 modules might include sensors, actuators, indicators and projects that need remote two-way communications.

I’m developing PIR (passive infrared) area monitors, networked lighting systems, remote environment sensors and a wireless clicker for my LibreOffice Impress presentations. All these things use near-real-time, two-way communication between the remote node (the ESP8266 device) and my LAN, servers, the Cloud or user applications.

In this installment, I’ll cover a basic communication scheme for the ESP8266-07 model. Feel free to expand the concepts to create your own IoT projects.

As we’ve discussed in earlier Off-The-Shelf Hacker stories, the ESP8266 chips are programmed using a variety of languages and frameworks. Personally, I like the Arduino IDE. The code syntax makes sense to me, the function libraries are pretty comprehensive and the environment is the same for 8266s, the Arduino and Processing project work. Be sure to review the previous “Read Schematics Like A Pro”, “Add WiFi Connectivity to Your DIY Projects with the ESP8266” and “The Split Personality Of The ESP8266 WiFi Chip” The New Stack stories.

The setup for using an ESP8266-07 is similar to the -01 version, except that the -07 has an external antenna connector and more general purpose input/output (GPIO) pins. The physical break board looks pretty complicated.

The circuit is actually pretty straightforward, as shown in this schematic.

Libraries are the modern labor-saving devices of the Arduino IDE environment. Not surprisingly, I snarfed code from one of the ESP WiFi libraries to get started with my 2-way communication routine.

The code is broken down into two parts, connecting to an access point (AP) and handling the GPIO.

Part 1 handles joining an access point and comes from the “AutoConnectWithFeedback” example program under the “WiFiManager” category. If the 8266 device hasn’t connected to a particular access point before, it starts it’s own access point and posts a page on its Web server (http://192.168.4.1), giving a user on a WiFi/browser equipped device (like a Galaxy 5 super phone) the option of choosing which AP to join. At this point, there is a temporary LAN between the 8266 device and the phone. The page then prompts the user for an AP access password. The 8266 will do a reset and connects to the chosen LAN while shutting down the temporary LAN and Web server. If the wifiManager.resetSettings(); line is commented out, it remembers AP credentials, so you don’t have to enter the SSID and password each time. Uncomment the line to reset the settings, during programming and troubleshooting.

After the WiFi part of the code is initialized we move on to part 2.

Here’s the code for part 1.

Part 2 handles reading the button, sending messages to remote machines (like my Galaxy superphone or Linux notebook) and optionally turning an LED on or off.

Interestingly, Part 2 just naturally breaks out in the looping part of the firmware, which actually does the work of the device. Additional functionality would most likely be inserted in this section.

Here’s the code for Part 2.

The code isn’t anything complicated. It establishes connectivity and starts a server when a remote client connects. The remote client might be an application or even the network terminal-like program, netcat. I used netcat on both a Linux notebook and my Galaxy 5 phone while assembling this story. When the button is pushed, the 8266 sends a “button pushed” text message to the remote client machine. If the remote machine sends an “H” character to the 8266 device, it lights up the LED. Likewise, sending an “L” character turns the LED off. Make your messages depending on your functional needs.

The printWiFiStatus() code simply sends status information to the serial terminal and is useful for development and troubleshooting.

A basic two-way communication scheme is a reasonable starting point for expansion, with more buttons, sensors, outputs and so on. Since the LAN configuration code is built-in using library functions, it’s also easy to use the device in different locations, with little extra effort. A little bit of planning and logistics could make the concepts outlined today scalable to larger projects with multiple devices and locations.

Once you have the buttons or sensors and output devices established, it’s easy to change behavior by just modding and uploading new firmware.

You might look at the ESP8266WiFiMesh and ESP8266WiFi examples for additional project ideas.

Rob "drtorq" Reilly is an independent consultant, writer, and speaker specializing in Linux/OSS, physical computing, hardware hacking, the tech media, and the DIY/Maker movement. He provides a variety of engineering, business and special project services to individual clients and companies....
Read more from drtorq
SHARE THIS STORY
RELATED STORIES
The Graph of Life in a Post-Relational World How and Why to Respond to Incidents the Right Way Case Study: How Dell Technologies Is Building a DevRel Team Snack Stack: If Programming Languages Were Desserts ... New Book Identifies 26 Lines of Code that Changed the World
TNS owner Insight Partners is an investor in: Shelf, The New Stack.
SHARE THIS STORY
RELATED STORIES
AWS Brings AI/ML Training to Community, Historically Black Colleges Building an Internal Developer Platform Isn't Just about Tools eBay: Betting on Open Source Is Great for Your Business Snack Stack: If Programming Languages Were Desserts ... The Graph of Life in a Post-Relational World
THE NEW STACK UPDATE A newsletter digest of the week’s most important stories & analyses.
The New stack does not sell your information or share it with unaffiliated third parties. By continuing, you agree to our Terms of Use and Privacy Policy.