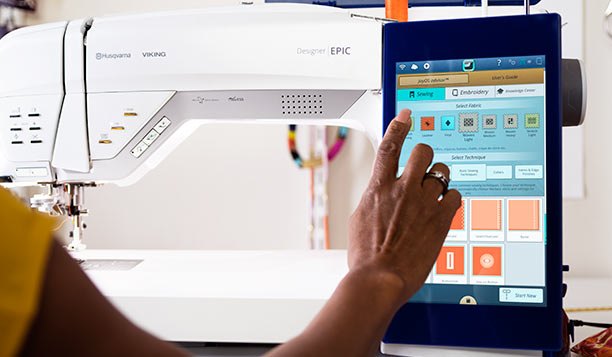 If I say Husqvarna, most people think of chainsaws. A few Off-The-Shelf Hacker resident dirt-bikers will recognize the Swedish brand as a high-end manufacturer of two and four-stroke motorcycles.

At The New Stack, we pride ourselves on connecting the dots with the latest computing, software, networking, physical manifestations in the real-World (projects) and hacker topics. Sometimes the connections are quite a stretch.

How about sewing machines? Yup, Husqvarna makes those too.

While perusing a local chain fabric store looking for foam for Hedley the Robotic Skull’s travel box, I came across a sewing machine running by itself, unattended. I stood there for a minute, mouth agape, as a cool embroidered pattern magically emerged from under the needle.

What I encountered was the Husqvarna-Viking Designer Epic sewing and embroidery machine. This robotic seamstress has a tablet-sized high-resolution color touchscreen and an over-sized work area with an X-Y rack for the fabric. The fit and finish of the machine itself was sleek and ergonomic. Clearly, the company has put a great deal of thought and effort into their design.

Think of the Designer Epic as a 2D printer for thread. According to the spec sheet, there are 651 designs (currently) and 807 built-in stitches available. The machine also has 120 onboard graphical tutorials and animations so novices and experts alike can understand how to perform various sewing tasks correctly. Be sure to click on the “More Features” tab on the web page.

Speaking of web pages, I frequently highlight the importance of presentation and aesthetics in off-the-shelf hacker projects. Equally important is the marketing-type material, IE: the web page. Husqvarna-Viking has done an exceptional job of showcasing their new machine, with videos, detailed technical information, user projects and testimonials. The last category is frequently missing from most company sites. Getting your users to endorse your product certainly can massively help your credibility especially in a technically challenging area like sewing.

The device is also WiFi and cloud-storage enabled. You can search through a catalog of new patterns and designs that will download right into the machine. Being networked also makes software updates a snap. As you would expect, there’s also a mobile app that provides users with project status, thread changing notices, more graphical tutorials and other important functions.

I looked around the web for other physical computing sewing machines.

There’s the HQ Fusion series, made specifically for quilters. It creates precision stitch paths, that is characteristic of traditional decorative quilts. It has a touchscreen that controls the stitching, but fabric movement under the sewing needle is still up to the operator. The machine with gallery frame runs about $24,000.

Softwear has Lowry, a four-axis sewing system that does material handling, pick and place and direct sewing duties. It uses machine vision to adjust for fabric distortions and variation.

Stitch Together Your Own Unique Career Path

HackADay had a terrific story about a guy who used an Arduino, a Raspberry Pi and a vintage Borletti sewing machine to come up with a build similar to the Designer Epic. He’s been working on the project since 2012.

While the Designer Epic is an awesome physical computing use case, it apparently represents a rather small area of innovation in the garment industry. I really didn’t find much in the commercial robotic sewing machine department.

FastCompany had a story, last year, on automation in the garment industry. You’d think that robots would be all over the place, but no. According to the story, the industry is mired in a lot of old-school labor-oriented thinking, where much of the work is done by human workers, typically in Asia.

One company mentioned in the story, Sewbo uses a chemical treatment to stiffen the fabrics, so an off-the-shelf industrial robot can run the parts through a conventional sewing machine

It’s easy to get stuck in your thinking with physical computing, the Internet of Things (IoT) and automation, in spite of the current rate of technological change. I’ve sometimes fallen victim myself, focusing on a handful of devices and how they might be connected to some sensors, servos, etc. But navigating around the physical computing stack requires quite diverse interests and skill sets. The landscape is huge.

So, periodically I like to jolt my big-picture scope with an off-the-wall story about something like a $10,000 computerized sewing machine.

What “way-out-there” physical computing have you run across lately?

Rob "drtorq" Reilly is an independent consultant, writer, and speaker specializing in Linux/OSS, physical computing, hardware hacking, the tech media, and the DIY/Maker movement. He provides a variety of engineering, business and special project services to individual clients and companies....
Read more from drtorq
SHARE THIS STORY
RELATED STORIES
Azure Went Dark Feature Flags Are Not Just for Devs Entrepreneurship for Engineers: Avoiding Feature Bloat How to Get Started Filling 3.4 Million Cybersecurity Jobs Google Touts Web-Based Machine Learning with TensorFlow.js
TNS owner Insight Partners is an investor in: Shelf, The New Stack.
SHARE THIS STORY
RELATED STORIES
Anil Dash on Mastodon Joining Fastly’s Open Source Program How to Get Started Filling 3.4 Million Cybersecurity Jobs Generative AI: How Companies Are Using and Scaling AI Models Azure Went Dark How New Sony AI Chip Turns Video into Real-Time Retail Data
THE NEW STACK UPDATE A newsletter digest of the week’s most important stories & analyses.
The New stack does not sell your information or share it with unaffiliated third parties. By continuing, you agree to our Terms of Use and Privacy Policy.