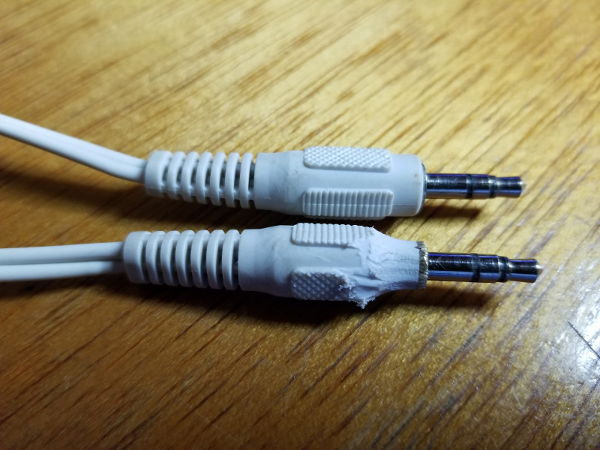 Last week we looked at how to hook up a mono 5-watt audio amplifier to my talking robotic skull, Hedley via its Raspberry Pi mainboard. The sound will come from a small speaker in the roof of his mouth, which coupled with synchronized jaw movement will make him speak. I’m currently searching for the perfect speaker to fit into his noggin. Look Ygor, it’s alive!

Along with Hedley’s voice, I occasionally need to output stereo sound from his Raspberry Pi 3, such as when running him in “skull top” mode with the portable Steampunk monitor. The steampunk conference badge (with a Raspberry Pi model 2) also has audio output capabilities that I’d like to leverage when I’m doing small tech demos. Finally, since the speakers on the ASUS Linux notebook are pretty small, it would be great to have a little more power when listening to audio from that device.

Let’s throw something together for the job.

My latest solution is to integrate a small audio amp board into the portable steampunk monitor. The monitor’s video driver board, while supporting HDMI video, doesn’t have HDMI audio. Some video boards do support audio and you might specifically look for that feature if you want to streamline the number of devices in your project. Nevertheless, it’s not hard to cobble together a companion audio amp to integrate with the monitor and my other gadgets.

The 10-watt per channel stereo amp I chose is a mere 1-1/2 inch square board with a potentiometer in the front and sockets for the on/off and mute switches. 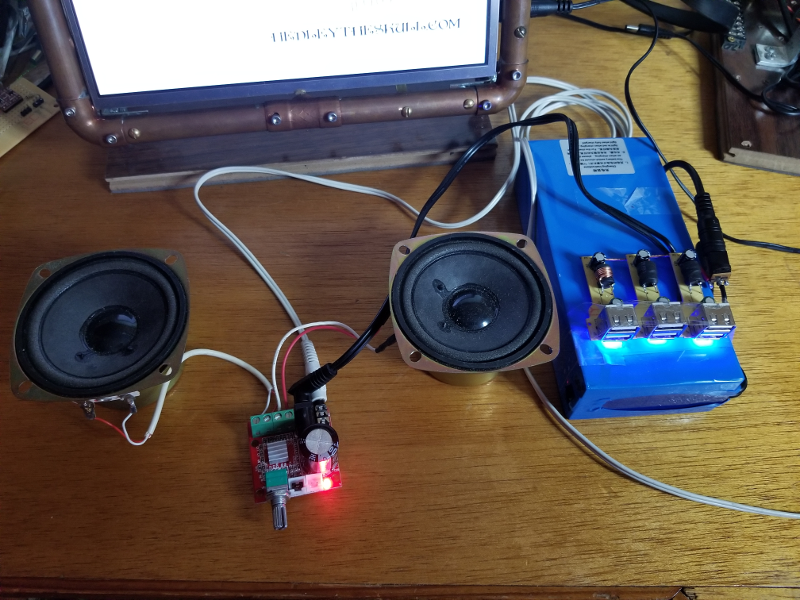 Amp and Speakers With the Power Brick and Steampunk Monitor

The rear edge of the board has two pairs of speaker output screw terminal blocks, the 12-volt power input socket, and an audio input port.

Hooking up the amplifier is straightforward. I repurposed an old set of computer speakers by removing them from their plastic enclosures and adding short lengths of wire to their terminals. The other end of the wires were simply stripped and screwed into the terminal blocks on the amplifier board.

Audio input was supplied via a standard 2-channel cable that you might use to connect your smartphone to the radio in your car. Most people call it an “aux” cable. I actually used my smartphone for the initial testing although the connector sleeve had to be cut down slightly to make the connection. My Galaxy 8+ has a Pelican protective case and the hole for the earphone connection was too small for the cable plug. I used the Dremel with a sanding drum to narrow down the outside of the plastic connector cover so it would go through the hole in the phone case without interference.

The audio input cable is very sensitive to positioning. If the connectors aren’t plugged exactly right into the sockets there will be static, a 60 Hz hum, or distorted audio on one or both channels. Maybe just purchasing a new aux cable from the Dollar Store will resolve the problem.

With a good input signal, the volume is pretty decent. I ran the amplifier from both a 12-volt wall wart and the compact portable power brick, with no difference in sound.

The repurposed computer speakers were a bit tinny sounding for my tastes. For regular voices, like on YouTube, it isn’t much of an issue. Playing songs and music is OK, but don’t expect audio-aficionado level performance. I’m on the hunt for better speakers.

On the other hand, the existing smallish speakers could integrate well into the base of the steampunk monitor. I’ll need to figure out a way to mount them so they are protected when folding up and transporting the monitor.

Adding stereo audio to your physical computing project is fairly easy and there is a good selection of amplifiers at the usual sources.