Supplying power to a portable or mobile physical computing device can be quite challenging. Fortunately, modern off-the-shelf parts are available at reasonable prices, so you can pretty much get whatever you need. The trick is that you have to build it yourself.
Dec 30th, 2018 6:00am by drtorq 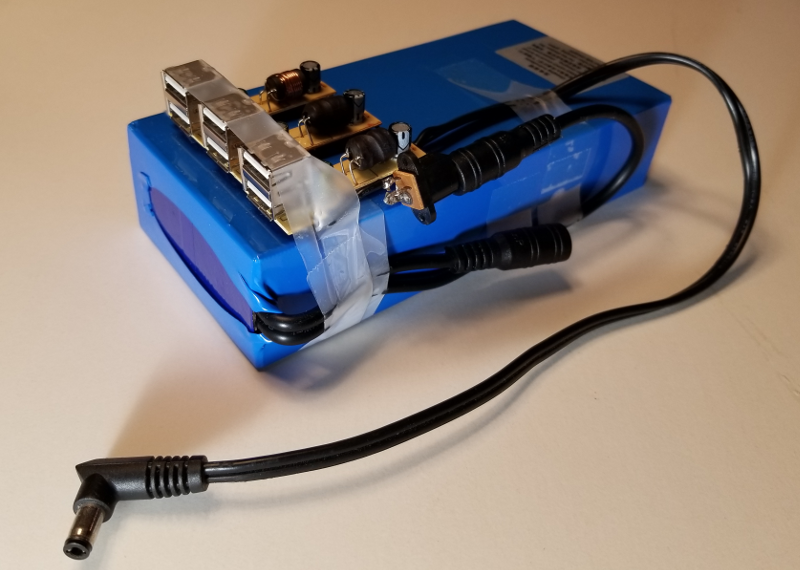 Supplying power to a portable or mobile physical computing device can be quite challenging. Fortunately, modern off-the-shelf parts are available at reasonable prices, so you can pretty much get whatever you need. The trick is that you have to build it yourself.

For example, I needed a portable power supply for Hedley, the robotic skull. Last July I was slated to do an onsite demonstration at a local pub in Portland. Hedley and my notebook both needed 110 volt AC. Sadly, I didn’t take a 100-foot long extension cord with me to the venue. I tried to run Hedley off of the USB ports on my notebook and an external power brick. No dice. The demo was a bit of a disappointment.

I decided to come up with a portable solution so I could run Hedley without a power outlet. He requires power for his main Raspberry Pi 3 microcontroller, the JeVois smart vision sensor, an Arduino Duemilanove for the pan servo and an Arduino Nano for the jaw servo. The Raspberry Pi and JeVois sensor both run on five volts. I also use a portable 10.1-inch color HDMI monitor with Hedley, which requires 12 volts. My requirements called for at least three standard 5-volt USB ports and a 12-volt connection for powering the monitor.

I started construction by ordering a 15,000 mAh super polymer lithium-ion battery from Banggood. It measures about 5 x 3 inches by 2 inches thick and is surprisingly light. It has standard female charging and male output barrel connectors. The battery came with a 12.6-volt charger and had a European two prong plug. I’ve been charging the battery with a 12-volt wall wart and will probably hack in a standard US 110-volt plug sometime soon.

The battery worked with the monitor right out of the box. I plugged it into the driver board and the monitor instantly sprang to life. The battery has an ON/OFF switch on the opposite side as the power leads. The instructions said that you should turn the switch to the on position when charging the battery.

Little USB power supplies are readily available and inexpensive. Amazon has a set of five boards for about $9. They take anywhere from 4.5 to 24 volts on the input and outputs fixed values from 1.8 to 12 volts at up to 3 Amps. Other vendors have similar boards.

Rather than ordering from Amazon, I stopped by the local Dollar Tree and bought three 12-volt to USB car charger plugs. Naturally, they were a $1 per. Each one has two USB ports and are supposed to be rated at 2.1 Amps. 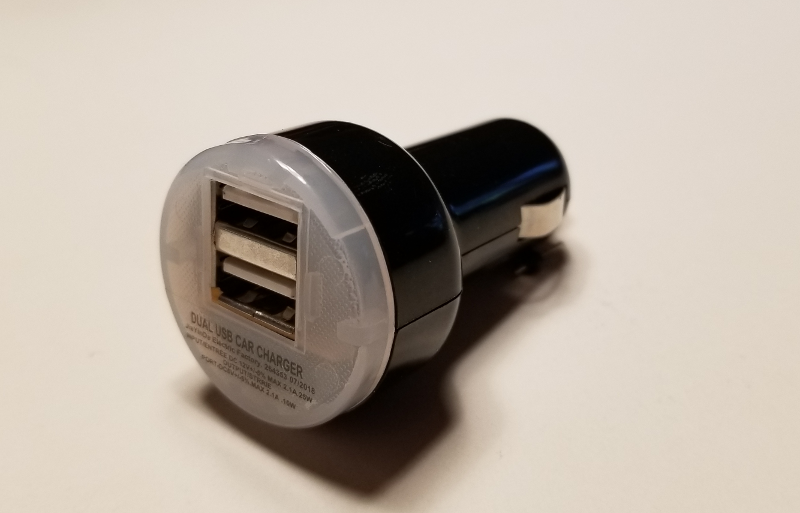 The Dremel with a cutoff wheel made quick work of removing the plastic case so I could liberate the charger boards. It was then a simple matter of connecting the three boards with some 16 gauge stranded wire and a panel-mountable female barrel connector. The center pin on the connector went to the positive power input side of the boards while the outer connector shell went to ground. The male output connector on the battery plugs directly into the USB charger board female connector. I used the battery switch to turn the power to the boards ON/OFF. I also salvaged a 12-inch length of two-wire cable with a male barrel connector from an old wall wart to plug into and power the 10.1-inch monitor. 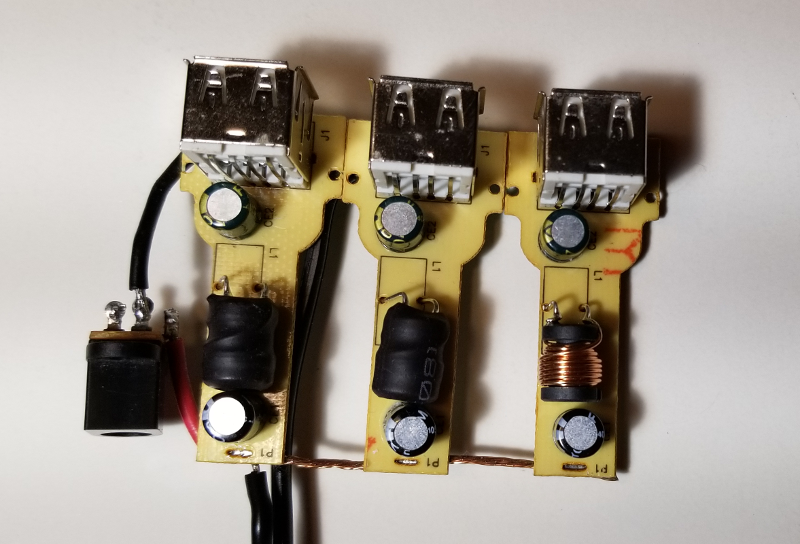 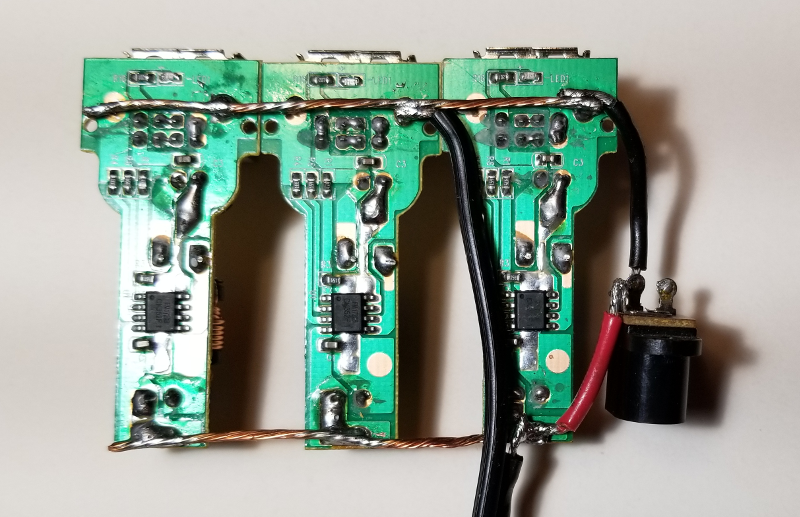 The battery works pretty well with Hedley and the monitor. I took him to my offsite office, Panera Bread and he and the monitor ran on the battery for a couple of hours without any problems. I noticed when all the electronics are up and running, that the Raspberry Pi 3 occasionally shows the “low voltage” warning symbol on the monitor.

The Pi 3 is very sensitive to the quality of the USB cable. Use a high-quality cable and the Pi will be happy. Small diameter wires and cheezy connectors in cheapo cables simply can’t pass the amount of current needed. Using short cables is a good idea, as well.

I’ll have to live with using Hedley, the monitor, and the battery for a little while to see how the system performs. A small audio amplifier is in the works to drive a speaker in the roof of Hedley’s mouth. Won’t it be cool to hear Hedley speak and see his mouth move at the same time? That will add to the load on the battery and I’m anxious to see how it all works when doing “portable” demos. Look for an update soon.

Rob "drtorq" Reilly is an independent consultant, writer, and speaker specializing in Linux/OSS, physical computing, hardware hacking, the tech media, and the DIY/Maker movement. He provides a variety of engineering, business and special project services to individual clients and companies....
Read more from drtorq
SHARE THIS STORY
RELATED STORIES
Surmounting the Challenge of Building Web3 Applications  Platform Engineering Is Not about Building Fancy UIs Internal Developer Portal: What It Is and Why You Need One Trace-Based Testing for a Distributed World A Brief DevOps History: The Road to CI/CD
SHARE THIS STORY
RELATED STORIES
Streamline Event Management with Kafka and tmctl A Brief DevOps History: The Road to CI/CD Crossplane Curious? Marketplace Makes Onboarding Easy Internal Developer Portals Can Do More than You Think The Hidden Costs of 'Free' Internal Developer Portals
THE NEW STACK UPDATE A newsletter digest of the week’s most important stories & analyses.
The New stack does not sell your information or share it with unaffiliated third parties. By continuing, you agree to our Terms of Use and Privacy Policy.