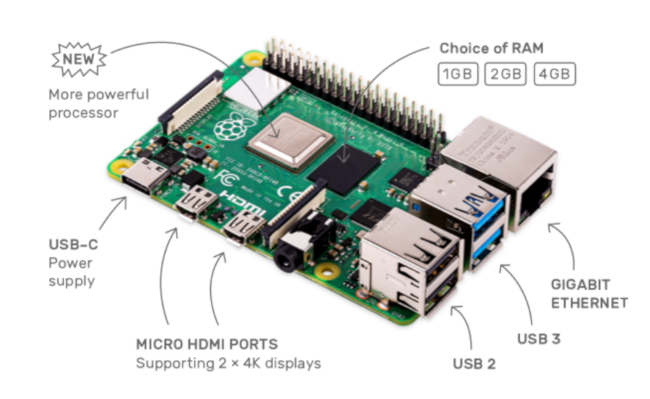 A shiny new Raspberry Pi 4 board arrived to the Dr. Torq headquarters last week, along with a Raspberry Pi Zero W, some Hall effect sensors and a 3.0-amp wall wart.

Pi 4’s have been a little hard to come by and I was glad to finally have one sitting on my desk. I’ve been anxious to see how the thing works in a few projects. Reports on the web and the specs say that the Pi 4 is a significant jump in performance over older models. Ordering the 4GB memory version set me back $59 through Sparkfun. The 3.0-amp power supply was another $8.

This week I’ll share my initial observations of using the Pi 4 for a few everyday computing tasks. Is it faster than older models? Will it work as a desktop? Will it work in future Off-The-Shelf Hacker projects?

I’m happy to report that it is quite a bit faster than previous Pi boards. Yes, it works as a desktop. And, I think it will work great in upcoming project builds. Being able to do regular desktop jobs might also speed up the physical computing development workflow, because hacking both the hardware and software can be performed on one machine. The dev machine becomes the working prototype and demo unit. Sweet!

More specific details might help you decide how you might leverage the latest Raspberry Pi single-board-computer (SBC) in your own projects. Let’s take a look.

The first thing that had to be done was to install the latest desktop with the recommended software version of Raspbian Linux (Buster: 07-10-2019) on a new SanDisk Extreme 64GB micro SD card, using the crusty old Asus Linux notebook. The .img file ends up being about 3.6 GB in size. Even with “only” 64GB of space on the card, this is likely more than enough file system space for any physical computing projects we have coming in the foreseeable future. At around $15 on Amazon, I didn’t think a larger, more expensive SD card was needed. Being able to run dual monitors on the Pi 4 requires the Buster version of Raspbian Linux.

The downloaded file was unzipped in a Linux notebook terminal window.

The resulting .img file was then burned onto the SD card using the dd command.

After that I placed the SD card in the Pi 4 card slot, connected up a couple of HDMI monitors and plugged the Logitech wireless keyboard/mousepad into one of the USB-2.0 ports. Finally, using a Raspberry Pi Foundation approved 3.0-amp wall wart I attached the USB-C connector to the board.

The Pi 4 booted right up and I went through the normal process of setting the wifi and default user passwords.

I like using the Synaptic package manager, so that was the first piece of new software added to the system. Under Synaptic I then loaded guvcview, luvcview, webcamoid and the standard LibreOffice productivity suite.

Application Impressions on the Pi 4

The webcam viewer programs, which are needed to see the video feed from the JeVois smart machine vision sensor, is something I’ve been working with for quite a while. Sadly, guvcview and webcamoid didn’t work out of the box and need either several command-line options or a bit of tweaking before they are viable. Not much different than the Pi 3 in that regard. As always, luvcview worked with a simple height and width command-line option. Luvcview has never let me down as a real-time webcam viewer, especially during conference tech talks, so I’ll probably just stick with it as my default.

LibreOffice on the Pi 4 is finally a real joy to use. Writer took about 10 seconds from pressing enter to be ready to start writing hard-hitting, thought-provoking Off-The-Shelf Hacker columns. LO Impress took only about five seconds to get to the main presentation windows with all the menus and the initial slide template.

Imagine my surprise upon loading my 2018 OSCON robotic skull presentation and starting the slide show to see the small 10.1-inch color LCD monitor (HDMI-1) display the slide presenter console, while the bigger LG 19-inch monitor (HDMI-2) displayed the actual slide. Moving up and down through the slides was lightning fast, while the visual quality of the slides was excellent. This was a far cry from the days of old, with the back-then latest and greatest Raspberry Pi 3 model B. Using the Pi 3 as a presentation machine required shrinking down graphics using the .png format and still having to wait slightly for new slides to load. Performance was great on the Pi 4, even with the Chrome browser running in the background.

Speaking of Chrome, it also was a very pleasant user experience. Where the Pi 3 would barely be able to load a Nelson Racing Engines video and play the audio without buffering, that is certainly not the case with the Pi 4. Using a resolution of 1920×1080 on my antique 19-inch LG TV/monitor, the Pi 4 could easily play 1080p videos without any buffering, dropouts or out-of-sync video-to-human voice issues. Watching a full-screen movie is a no-brainer on this machine. I don’t have a 4K monitor, so was limited to 1080p and 720p video playback. It was crystal clear with no pixelization. The audio is selectable too over analog or through the HDMI speakers. I didn’t test audio over Bluetooth, although the Pi 3 worked with my Amazon Dot.

The default desktop load had a minimal set of applications on the main menu. You’ll want to pick out your specific set of programs depending on the types of projects you’re building. I still need to download the Arduino interactive development environment (IDE) and the Processing language group.

Essentially the Pi 4 is a full-fledged nano-Linux machine, that will handle most regular desktop computing tasks. I think most off-the-shelf hackers will be happy with the Raspberry Pi 4, especially if you get the 4GB model and a solid, name-brand high-speed micro-SD card.

Be sure to order a 3.0-amp or up power supply with the Pi 4. Although I have that big honking 15,000 mAh 12-volt Li-Ion battery, I’ll probably have to rethink my strategy on powering the Pi 4 in portable situations. Likely I’ll order a 12-volt to 5-volt converter that can deliver over 3.0 amps reliably. Banggood and Amazon have a few different offerings.

Using two monitors, you’ll need to use micro-HDMI cables to connect to the Pi 4. A two-pack of micro-to-standard HDMI adapter cables ran me about $9 on Amazon and worked just fine connecting up to the regular HDMI cables I had on hand.

Another area I’ll have to address soon is cooling the new Pi 4. I didn’t have any overheating problems with the board, although just running the Chrome browser and a video, along with LibreOffice wasn’t all that taxing. If the board goes in an enclosure or I start doing AI/neural network-type jobs, cooling will definitely have to be considered.

There you have it. The Pi 4 is out and will open up new opportunities in physical computing. Look for further coverage as I integrate the platform into new off-the-shelf hacker projects.

Catch Dr. Torq’s Off-The-Shelf Hacker column, each Saturday, only on The New Stack! Contact him for consultation, speaking appearances and commissioned projects at [email protected] or 407-718-3274.