Off-The-Shelf Hacker: From the Space Age to the Age of DIY 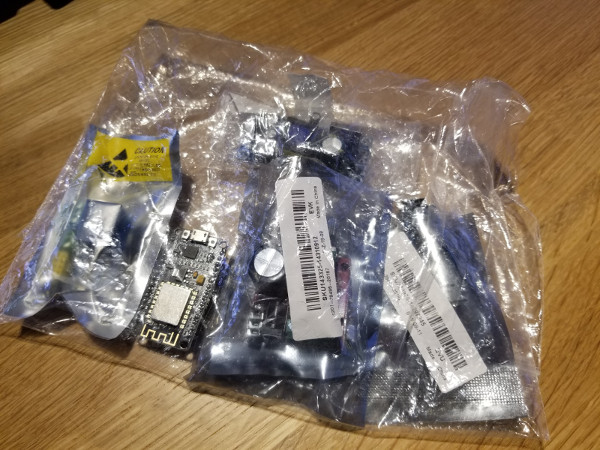 There has been scant little coverage of the Apollo 8 space mission that occurred just 50 years ago around this past Christmas season. In a small capsule, three American astronauts successfully circled the moon and made it back to Earth in one piece. Those were the heady tech days of 1968. Dad and I went to see 2001 A Space Odyssey as soon as it hit town, in April. He was an engineer for GE Aerospace and I was 10 years old.

The moon mission was an absolutely astounding achievement. They blasted off from Cape Canaveral, traveled 250,000 miles to the moon, fly around it a few of times, then fired the rocket at just the right second to safely head back to our big blue marble. And, that burn happened on the dark side of the moon out of communication with Houston. Talk about edge computing. Foundations where being built for today.

Back then I was taking apart old tube radios, building a crystal receiver and running wild in Alverthorpe park across the street. Actually, I used a then fairly new germanium diode instead of the finicky cat’s whisker detector for the crystal radio. Nothing but the latest off-the-shelf tech available, for me, even way back when! The humble rig was built on a small piece of pine planking, had a miniature 365 mF variable capacitor, an adjustable coil and a huge Heathkit earphone. WiFi, microcontrollers and cloud computing wasn’t even in my consciousness yet.

We’ve come a long way in all those years. Have we?

A bag full of parts recently arrived at my house from China. The late ’60s were the space age. Now we are smack-dab in the middle of the off-the-shelf age.

When Hedley and I presented at the recent Embedded Systems Conference in Minneapolis, his speaking voice went out over the house sound system via the HDMI connection. I was wearing the usual lavaliere mic. We carried on a brief scripted conversation, to kick off our talk. I think the audience would have thought is was way cooler if Hedley had a microphone on a stand in front of him, to pick up the sound. I simply hadn’t given him a self-contained physical voice yet.

One of the parts I received, the other day, was a 5-watt mono audio amplifier. Banggood has five of these little 1/2-inch X 3/4-inch boards for $3. Somehow six of the boards ended up in the order. Mono is great because I’ll install a small speaker in the roof of Hedley’s mouth soon and it’ll look like he’s talking.

Wait, he will actually be talking. Robots will have human behaviors and capabilities soon, don’t you know. I guess we better get used to thinking in those terms. That’s what all the experts say anyway. Right? 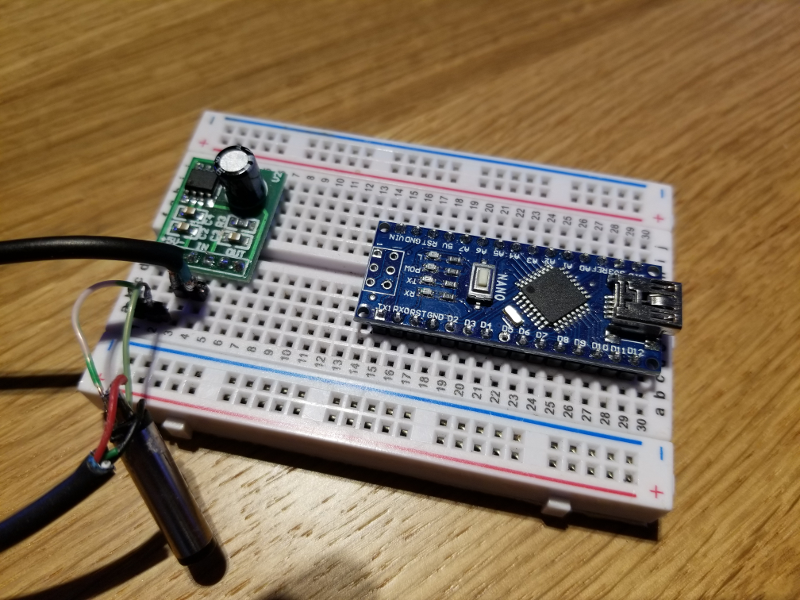 5-Watt Audio Amp Next To An Arduino Nano

The audio board has six terminals. There are a 5-volt plus and minus, a pair of input pins and a pair of output pins. I fed one channel of audio from Hedley’s Raspberry Pi headphone jack into the audio amp’s input with a standard shielded audio cable and phone plug. The output was simply wired to a little 8 Ohm speaker.

Powering the board proved a bit tricky. I tried attaching the audio board’s power to a +5 volt pin on Hedley’s Raspberry Pi and ground. It didn’t work very well, resulting in a bunch of annoying noise. Mouse movements and just the operation of the Pi caused very distracting buzzing in the speaker.

I wired an old USB cable to the 5-volt inputs and plugged it into the steampunk portable monitor power brick and that worked great. The sound was loud and clear. Unfortunately, the buzzing returned as soon as I plugged the monitor into the battery and turned it on. The sound cleared up again when I plugged the USB cable into a separate 5-volt wall wart.

Making Hedley’s voice crystal clear when portable will be a bit of work. Grounding everything might help. Putting some chokes and capacitors on the power input wires might be another solution. If nothing else I can probably use an LM7805 voltage regulator and a pair of electrolytic capacitors to get clean power, with no buzz.

The audio amplifier works great. I played “Sympathy For The Devil” on the Pi and everything was crisp and clean. I also fed a few of Hedley’s phrases using a processing script to the speaker. It was also clear and will be plenty loud when a microphone is in front of his mouth.

Digging Deeper into the Bag of Treasures

Also included in this last shipment of interesting miniature circuit boards were the following:

10-watt, 12-volt stereo audio amp — this board will be bolted into the steampunk monitor assembly, so I can have awesome stereo sound anywhere and anytime. Get yourself one for about $3.50. 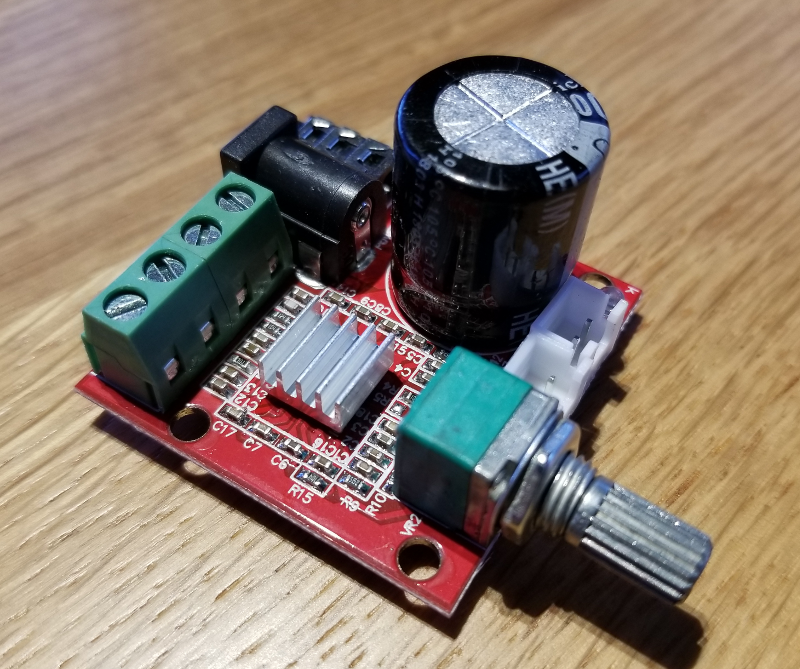 5-volt power supply — this board is essentially a 2-Amp wall wart without the case. The board is very robust. I plan to couple it with an ESP8266 relay board so I can switch some high powered floodlights on and off in my backyard. Price: three boards for about $10. 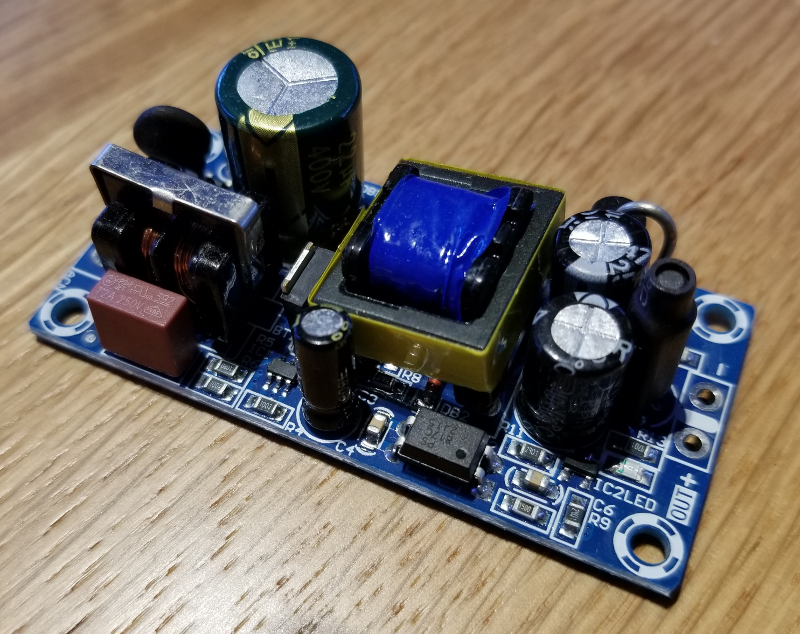 ESP8266-01 relay board — this $3 device uses the little 8-pin ESP8266 model 01 to turn a single 110/230 volt relay on and off. MQTT messaging is easily integrated into the 8266 firmware and will be used as the communication protocol. It runs on 5-volts from the above-mentioned power supply board. 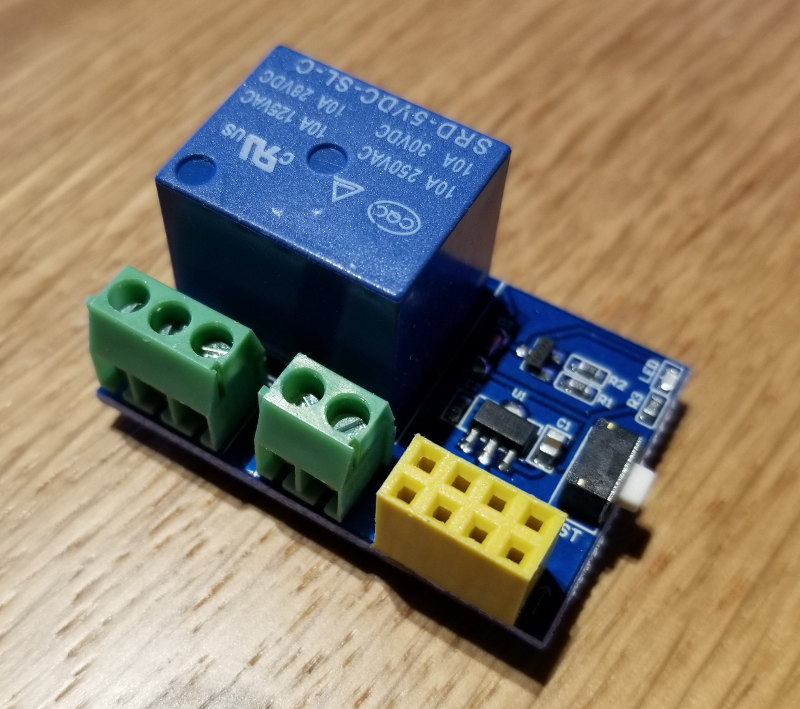 ESP8266-01 programmer — programming the ESP8266 model 01 boards have always been a pain. The $2 board plugs into the USB port on your Linux notebook or Pi and lets you program an 8266 without fuss. After burning the firmware, you just pop the 8266 out and stick it into the relay board. 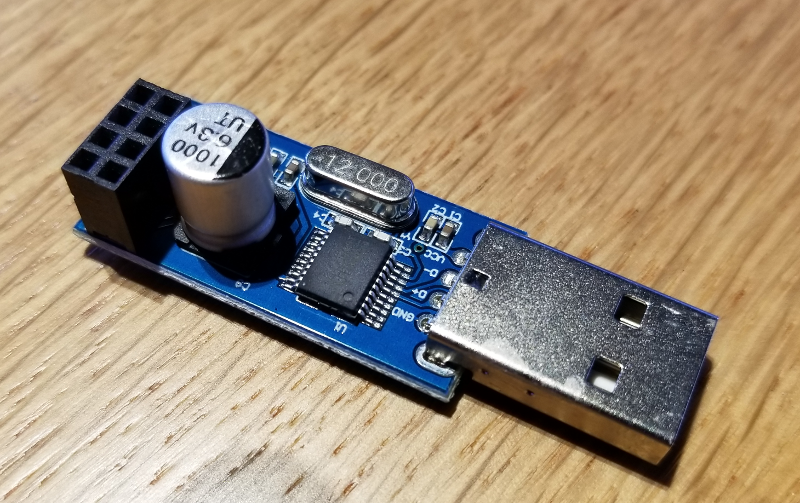 There is a lot of attention with people developing their own custom circuit boards for commercial products. It might include a microcontroller, some power circuitry, some sensors and so on.

I think there is also tremendous opportunity to simply order a few little boards, wire them together, write some code and do awesome things. Sure, connecting and miniaturizing everything has its challenges, particularly for packaging your device. Who cares though, if your project sits in a steampunk gadget on a table, is shoehorned into an electrical box or buried under an automobile dash.

My point is that off-the-shelf devices are cheaper and easier to get and use than any time in history. It’s truly the off-the-shelf age. Do some exploring on Banggood, Adafruit, Sparkfun and Amazon and let your imagination run wild in the virtual tech park across the street.

Rob "drtorq" Reilly is an independent consultant, writer, and speaker specializing in Linux/OSS, physical computing, hardware hacking, the tech media, and the DIY/Maker movement. He provides a variety of engineering, business and special project services to individual clients and companies....
Read more from drtorq
SHARE THIS STORY
RELATED STORIES
SANS Survey Shows DevSecOps Is Shifting Left  Engineering Leaders: Switch to Wartime Management Now The Graph of Life in a Post-Relational World Case Study: How Dell Technologies Is Building a DevRel Team eBay: Betting on Open Source Is Great for Your Business
SHARE THIS STORY
RELATED STORIES
Building an Internal Developer Platform Isn't Just about Tools What’s the Future of Feature Management? Tackling 3 Misconceptions to Mitigate Employee Burnout Collaborating with Internal Dev Experience and Tool Teams New Book Identifies 26 Lines of Code that Changed the World
THE NEW STACK UPDATE A newsletter digest of the week’s most important stories & analyses.
The New stack does not sell your information or share it with unaffiliated third parties. By continuing, you agree to our Terms of Use and Privacy Policy.