Off-The-Shelf Hacker: Give Them ‘Wow’ 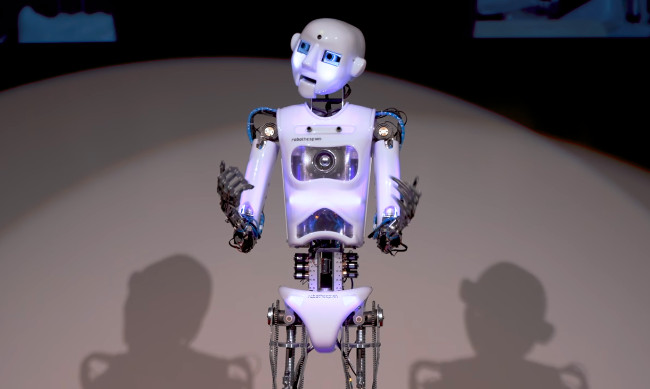 My friend approached the table as I sat at Panera Bread finishing up a weekly “Off-The-Shelf Hacker” column. I plugged Hedley in and he panned back and forth then opened his mouth a couple of times. Hedley is the robotic skull I’ve been developing for a while.

“You built that?” my friend asked. “Yes, I did,” I replied matter-of-factly. “That’s nice,” she continued.

“What does he do?” she asked excitedly. “You just saw it. He got your attention,” I added.

With that, she thanked me for the demonstration and went back to her Tuesday bridge club group.

I packed up Hedley and we headed home.

My friend didn’t have a “wow” experience.

Techies are inherently excited and find wow all over the place. Developers eat, sleep and breath code. Electrical engineers revel in their little board that saves a few milliwatts of power. Mechanical engineers slave over how thin they can make a beam and still hold up the load. UI experts swoon over a beautiful Android screen. Deep technical details, complex mechanisms, an obscure part number, that sweet interface or a ground-breaking algorithm, mesmerize us.

Family are remarkably accommodating with their geeks.

Non-techies and regular people don’t see it that way. They may not see it at all. They are way too busy living their lives or simply may not have much experience with tech stuff. I know corporate people who actually pride themselves on how little they know about technology. I know, to a techie, that just doesn’t compute.

As a result, trying to explain how a system works, sharing a recent discovery or even demoing a super exciting, cutting-edge physical gadget is a challenge, particularly when interacting with family, friends, business associates and even strangers.

Realizing that I’ve come up short is the first step to finding ways to help people have better tech “wow” experiences.

Avoid Being A Brainless Ratchet

I sometimes fall into the habit of thinking that everybody is interested in all those infinitely complex details.

I should discuss tech sparingly. A better plan might be just to let it go and steadily work away on getting the project to a milestone. I need to resist the temptation of heralding every breakthrough or solution to a small problem, like getting Hedley’s jaw moving or installing his LED eye. If a family member shows interest, give them a quick summary and see if they want more. If not, head back to the shop and soldier on with the mission.

Another idea is to be very aware that I may inadvertently overwhelm others with enthusiasm. Family are remarkably accommodating with their geeks. They are patient and put up with deep dives into servos, serial functions, networking and crazy steampunk get-ups. I frequently want to blurt out some tech idea I have when my wife is riding in the car, knowing all along that she will be suitably impressed. She humors me and sometimes even asks a question or two.

My 19-year old daughter always wants me to get to the point quickly. She’s an extremely quick learner and blows me out of the water in both raw mental computational power and memory. Her attention span is incredibly short. My window of opportunity for conversations with her are exceedingly narrow. So I just try to get to the bottom line, otherwise, she’s out the door with a quick “Love You” and on to her next stop.

How else can I optimize my tech evangelizing?

I could have made a better impression with Hedley at Panera by scripting a little routine that showcased a number of recent small accomplishments with the build.

It took considerable work to get Hedley to pan left and right and open his jaw. All that effort doesn’t translate into a big deal, in real life.

What if Hedley had uttered a few sentences, to go along with his jaw flapping? My bridge lady friend probably would have laughed if Hedley introduced me and told her that Dr. Torq was a crazy old eccentric inventor. Yes, making Hedley talk is in the works.

I need to think about what a quick show might look like to a person who isn’t necessarily technical. What would grab their interest, beyond Hedley’s devilishly good looks and well-integrated circuit boards? What would be irrelevant? What might tap into their emotions? How could they relate?

Next, I should pare down the tech details so the experience doesn’t overload the visual senses. I could install all the panels and neatly route all the wires. I should minimize the complexity on the outside so as not to distract from the entertainment value inside.

Then I could show it off in grand fashion. People like a well-orchestrated demo, even if it seems impromptu and incremental. It will take some planning. A project like Hedley lends itself very well to exercising the various technical capabilities and features in an automated way. Adding a bit of personality to any project enhances the human connection. Physical computing makes that trivial, so why not use it?

How the Pros Do Wow

Engineered Arts recently debuted a high-end, state-of-the-art humanoid robot in an English pub. The company fields incredibly complex technology, coupled with realistic eyes, skin and hair. A 15-minute video featuring the company’s founder, Will Jackson, outlines the company’s mission and provides expert insights into the effects of the coming robot revolution. The presentation is packed with ideas you can use to put “wow” into your projects:

Open Robots, AI and why the butler didn’t do it | Will Jackson | TEDxTruro on YouTube.