How the originality of steampunk could be enhanced with a bit of off-the-shelf hacking.
Oct 26th, 2019 6:00am by drtorq 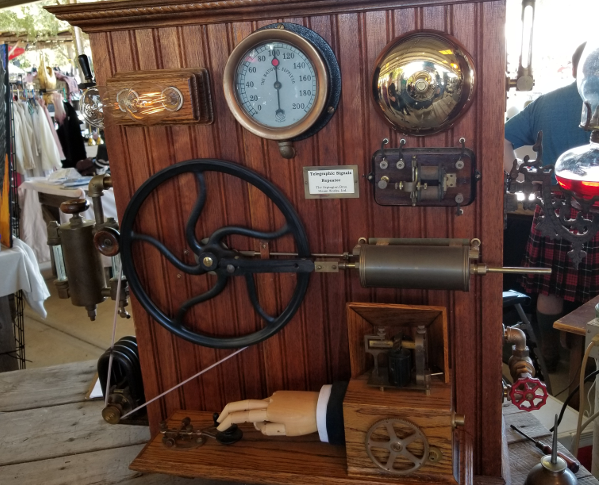 The yellow paper signs led me up and down through the grassy lot above the open-air building full of booths. I parked the car, put on my pin-striped vest, top hat and Raspberry Pi-powered steampunk conference badge, then proceeded down the hill into the event.

There, a couple dozen vendors displayed all manner of gauges, valves, gizmos and Victorian clothing for sale. People walked around in their knickers, kilts, corsets and leather having a fine time. Some even brandished lavishly decorated ray guns. Everyone was courteous to each other, as you certainly would expect at such an event. The world-famous The Cog Is Dead band played on the stage in the adjacent meadow. Even though it was hot, spending a splendid sunny Sunday afternoon at Renninger’s Steampunk Industrial Show was fun and entertaining.

One reason for my trip was to see just how much current off-the-shelf technology has migrated into the steampunk ecosystem. You’d think that the obviously enlightened artists and engineers of a steampunk industrial show would wholeheartedly leverage the magic of modern electronics and readily available parts to bring cool imaginative capabilities to their radical futuristic creations.

As I suspected, there was quite a bit of tech at the show, only from about a hundred years ago.

A Tough Nut to Crack

In spite of 10 or 15 years of steady development, automating stuff with off-the-shelf microcontrollers, sensors and actuators, while making it useful, has remained a fairly difficult task.

And, a steampunk industrial show out in the central Florida countryside is not an isolated case.

Morgan Housel recently wrote an article titled “Why New Technology Is A Hard Sell” giving deep insight into the situation.

Housel outlined six general reasons why new tech typically takes a while to merge into the mainstream. Summarizing:

1. The tech isn’t ready for the prime-time.
2. The old guard wants to keep the status quo and opposes new competition.
3. People don’t like to be told the old way isn’t as good as the new way.
4. New tech brings new culture, so the oldsters might see it as social decline.
5. This is how it’s always been done and it works fine.
6. New tech requires imagination and thinking.

Most off-the-shelf hackers have experienced these issues, as we roll out our projects and inventions to the world. 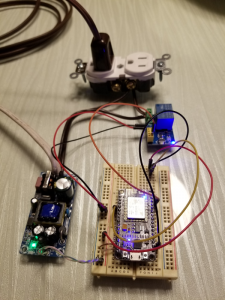 Number one and six stand out to me.

A great example of “not ready for prime time” could be my Alexa commanded ESP8266 light project from earlier this year. The device is an NodeMCU board (ESP8266-12e model) hooked up to a power supply and a relay board. The 8266 firmware includes instructions for attaching to my home network and being able to get commands from the Amazon cloud via the Amazon Dot sitting on my desk.

The gadget, as shown in the picture, sat on my family room table for a month. Was it ready for prime time? Not in my mind, although you have to start somewhere. The 110-volt terminals on the outlet were exposed and the whole works were in the way for any kind of activity on the table.

While the electronics worked, holding up progress was the enclosure. It took a couple of weeks for my wife and I to agree on a case to house the parts. We ended up finding an interesting little steampunk treasure-chest looking box with a hinged lid. It was a simple matter of stuffing in the parts, adding a plug to the input wire and routing the other side up to the overhead light. The box sits unassumingly on a little stand in the corner, out of the way. 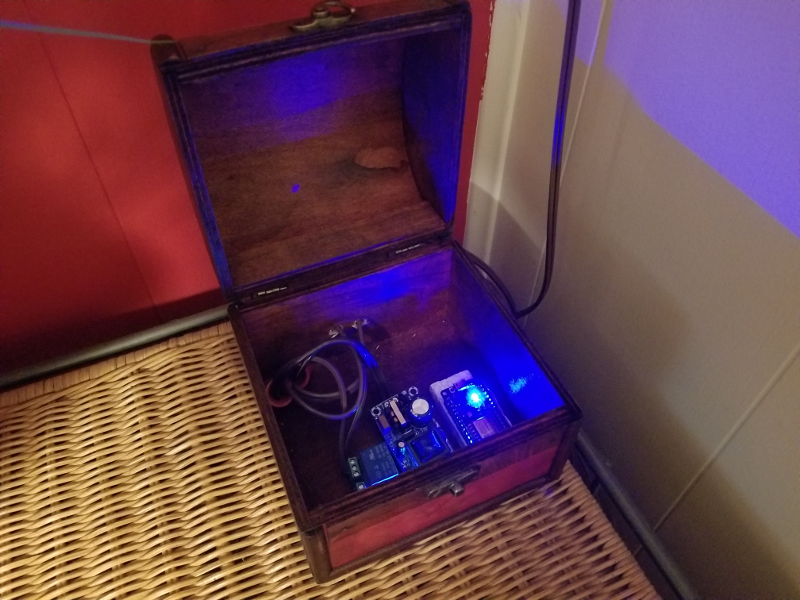 Was it then ready for prime time? Perhaps.

A funny thing happened after I plugged in the gizmo, while it was still on the table and showed the family how it worked. I told them to use “Alexa, turn on the family room light” for on and a similar line to turn it off.

After a few days, the entire family was turning the light on and off without a problem. Even one family member who isn’t living with us started using voice-control when they stopped by. Now it just comes naturally to everybody. It even works if you yell at the Dot in the dining room.

The tech has retreated into the background and the humans in our house have accepted it into their normal routine. So, exactly when was it ready for prime-time? That’s an equally tough question.

All was not completely lost on modern tech at the steampunk show. I ran into “imagination” and “thinking,” related to physical computing, as I made the rounds.

Upon meeting Matt, proprietor of the Insymmetry Creations booth, he enthusiastically watched as I booted up my steampunk conference badge. He had heard of Linux and the Raspberry Pi and was impressed with the touchscreen and old-timey promotional video which I ran on the display. He asked a few appropriately phrase questions so I know we were talking on the same wavelength.

Another vendor in a pith-helmet showed me one of his beautiful custom leather top hats, with a couple of expertly positioned LED strings around the top. I asked if he had any plans for using an Arduino to animate the lights. He said he was thinking about it, although he was concerned about the added weight.

Lastly, the feature image at the top of the page shows a telegraph machine. The white-haired elderly inventor had been a telegraph operator in his earlier days. He built the machine as a display piece and it has been in a few museums and shows. He simply wanted to educate younger people and make sure older tech didn’t fade into history. The craftsmanship was awesome.

The good thing is that all of these highly creative steampunkers WERE using a little extra imagination and considering maybe how current tech might possibly make their products and business better.

Odd, out-of-the-ordinary and downright weird things are expected at these events. It’s a bit of a paradox to me that the steampunk crowd isn’t really into integrated servos, steppers, ultrasonic sensors and microcontrollers into their designs. It feels slightly weird to be an outlier, an engineer promoting physical computing gadgets, in the company of these creatives. I guess somebody has got to do it. I’ve grown used to it.

The only other thing I can say is that I see similar things happening, to varying degrees, in robot clubs, maker spaces and at tech conferences. Usable, easy-to-program microcontrollers have only been around for about a decade and let’s face it, there is a pretty wide-ranging learning curve across a lot of seemingly complex topics and skillsets.

Nevertheless, as people get accustomed to the technology and start to become aware of it, I think it will be a good thing. Commitment and persistence are great qualities to have as an off-the-shelf hacker.

Keep spreading the word and give it a little more time.

Contact off-the-shelf technology for consultation, speaking appearances and commissioned projects at doc@drtorq.com or 407-718-3274.

Rob "drtorq" Reilly is an independent consultant, writer, and speaker specializing in Linux/OSS, physical computing, hardware hacking, the tech media, and the DIY/Maker movement. He provides a variety of engineering, business and special project services to individual clients and companies....
Read more from drtorq
SHARE THIS STORY
RELATED STORIES
Why 'Explainable AI' Can Benefit Business How Will Working in Tech Change in 2023? 2023 Will Be the Year FinOps Shifts Left Toward Engineering SRE Housekeeping: Where to Get Started for New Hires How to Get Started Filling 3.4 Million Cybersecurity Jobs
TNS owner Insight Partners is an investor in: Shelf.
SHARE THIS STORY
RELATED STORIES
How to Get Started Filling 3.4 Million Cybersecurity Jobs Java's James Gosling on Fame, Freedom, Failure Modes and Fun How Will Working in Tech Change in 2023? Platform Engineering Won’t Kill the DevOps Star Why Your Code Sucks: Common Excuses for Bad Programming
THE NEW STACK UPDATE A newsletter digest of the week’s most important stories & analyses.
The New stack does not sell your information or share it with unaffiliated third parties. By continuing, you agree to our Terms of Use and Privacy Policy.