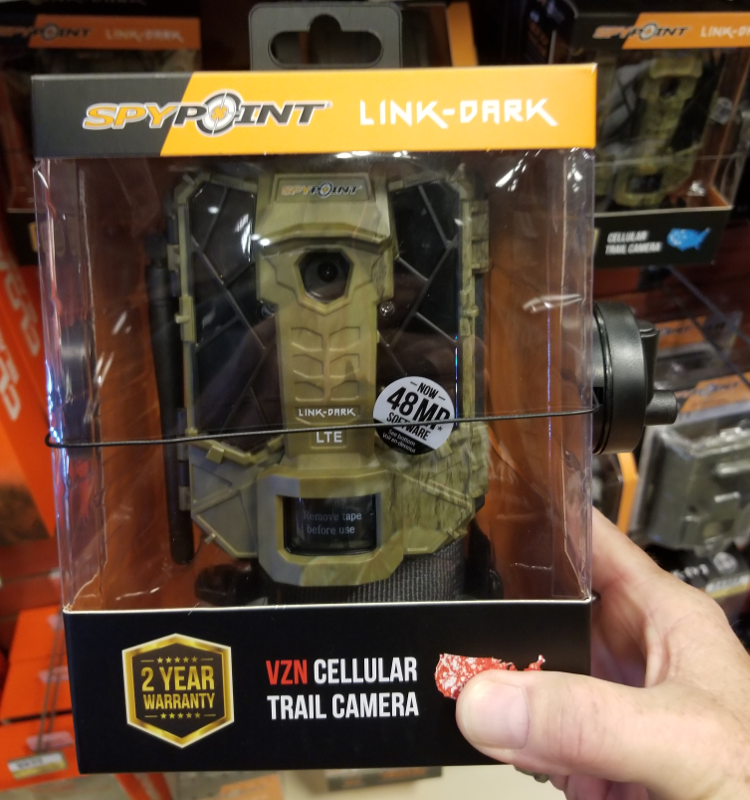 It’s the beginning of August and hunting season is nearly upon us. I’m more of a fishing and “enjoy being out in the woods” type of guy. Regardless, as a devout omnivore, I never down turn a helping of venison burgers, wild hog, or gator when placed on a plate in front of me.

How does hunting vector to off-the-shelf hacking?

Imagine my surprise on finding a “game cam modem” in the hunting section of my monthly Bass Pro Shop flier.

That’s right, you can buy an off-the-shelf, battery-powered modem that hooks your game camera up to a cellular network. Game cams have motion sensors that take a picture when a four- (or two-) legged animal moves in front of the lens. Pictures and videos are stored on an SD card. You’ve traditionally had to physically trudge out to retrieve the card and upload the content to your notebook computer.

Not any more. The modem connects to your existing game cam and you just fire up the online app on your smartphone or PC to see exactly what’s happening out on your favorite game trail.

Is this the next big thing? Nope, it’s actually a bit dated. There’s a whole crop of game cams that have the modem already built in.  Game cams are portable self-powered cameras that can be placed on the trail, in the forest or any other remote location. These devices sport 12 to 20 megapixel-and-up cameras along with 1080P video and audio plus night-vision capability. There are even models with external long-range wireless infrared cameras that connect back to the main cellular-enabled, color-day/IR-night game cam. The apps can even identify the animal it sees as well.

What will they think of next?

Off-the-shelf hackers are simultaneously on the forefront and frequently behind the curve on the absolute latest cutting-edge tech. I can tell you it is exceedingly difficult to keep up with ALL of the latest tech and I’ve been in it a long time. Most hackers feel like they are way out in front of the pack.

Many times we are, sometimes we’re not. A game cam modem didn’t show up on my radar until a few days ago. That’s OK. Being humble and marveling at not-invented-here (NIH) ideas keeps us in a positive mindset, open to new opportunities. Just take it all in then add your own spin. That’s a fundamental of off-the-shelf hacking. Maybe the $99 price tag of the modem could make it a viable way to put one of your off-the-shelf hacker projects onto the Internet of Things. Not only that, they’re camo colored.

The cellular game cam tech isn’t all that advanced, when you think about it. It’s a cell modem, wired to a microcontroller, with an SD card and an infrared motion sensor. Readers could perhaps build on this existing Peak Nature project from 2016 by adding their own modem board and setting up a cell phone app. Digi has an XBee form-factor modem that could be used for the purpose. Going further you could probably hook up IFTTT or Amazon Alexa for some kind of a spiffy interface. While game cams have been around for a few years, the cell-connected ones have appeared pretty recently.

I have to chuckle at myself, for not seeing a cell-connected game cam coming. Tech moves very quickly and it’s great to see it pop up in unexpected places. Similar advances are happening in fish finders.

Swerving off the beaten path, looking at things differently and exploring things that are “out of the ordinary” helps me stay open to new gadgets and projects, even at my age.

Taking it all in and adding your own spin is fundamental to off-the-shelf hacking. Of course that assumes a high level of curiosity in the individual. I’m naturally curious about practically everything. I’ve been that way since I was a toddler. Sometimes it annoys people.

Anyway, one interaction this past week validated tech’s shiny, bright future for me.

I was working on my robotic skull, which I call Hedley, at one of my offsite cafe offices. A young man in medical scrubs was grabbing a bite at an adjacent table. Hedley was sitting on my table looking out the window.

The young guy finished his meal and kept looking at Hedley. I knew what was coming. Before long, he came over and politely asked what it was. I said it was a robotic skull with a smart machine vision sensor, pan and jaw servos, and a Raspberry Pi for a brain. He was clearly excited and we sat and talked for a few minutes.

It turned out that he was a mechanical engineering student, from a state university, doing an internship at a local medical facility. His interest was in building surgical devices and he said he was taking a mechatronics course this fall. I demo’ed how the vision sensor recognized some nearby chairs, using the guvcview viewer on the Linux notebook. He wasn’t very familiar with the Raspberry Pi and the JeVois sensor was definitely something new to him. He was clearly surprised at the $50 price of the sensor and that it actually was two-year old technology.

Hedley and I encouraged him to stay in touch and I suggested he check out the “Off-The-Shelf Hacker” column. Of course, he had already pulled it up on his smart phone.

The Circle Of Tech

Inspiration for new ideas, projects and socializing comes in many forms. Sometimes you might be walking around in the hunting department of a major outdoors chain. Other times, you might meet an obscure, slightly eccentric technology writer, with some clearly “out-of-the ordinary” gadget, in a restaurant.

As off-the-shelf hackers, we can promote the craft and perhaps even influence the future at the same time. Older, advanced hackers can connect the dots, be inspirational and help guide the newer ones. Younger and new hackers can stay (get) curious and fearlessly explore what’s right around the corner and over the horizon.

It’s an awesome time to be in tech. What’s your next big thing?