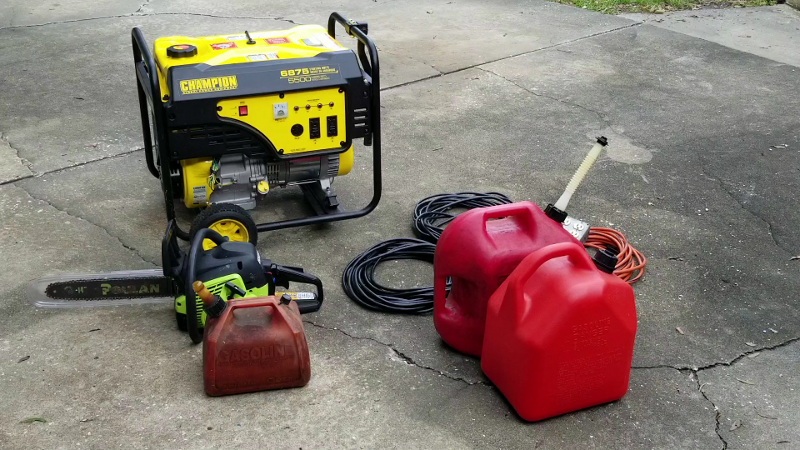 “We have a generator, so the air conditioning will still work, right?,” my daughter asked. “No, we won’t have any A/C,” I said. “We’ll be able to run the fridge, a couple of fans, lights, the TV, the router/wifi and laptops. And, we only run it for an hour or two, then turn it off for a couple of hours, so we have fuel for the long haul. The generator isn’t big enough to run the air conditioner.”

“Well, I’m going to a hotel, if the power goes out,” she replied.

“I know, Honey. Life in the modern world, is so tough,” I said while rolling my eyes.

We’ve been prepping for Hurricane Dorian for the last few of days. We’ve stocked up on gasoline, drinking water, provisions in the pantry and so on. Also, I trimmed the bushes and tree limbs around that technically all-important cable/internet connection. When Charley steamrolled through Orlando, back in 2004, our cable and high-speed internet were down for two weeks. Yikes!

We’ve learned a lot since then. This week, I wanted to talk about going to “portable operations” and how off-the-shelf hackers can satisfy their power needs when there isn’t any. Whether from a natural disaster or just being way out in the woods, life doesn’t have to suck because you don’t have 120-volt electricity.

Two years ago, a hurricane knocked out our power for four days. We had a generator in the box standing by if needed. We did. A limb from my neighbor’s tree snapped the feed wire to the transformer on the pole behind my house. It was a simple fix of joining the wire back together. As much as I wanted to reach up and make the patch, sadly, my bucket truck was in the shop that week. Also, repairing overhead residential electric service is probably best left to the professionals.

The generator we had purchased was a Champion Power Products 5,500 watt unit and cost a reasonable $600 plus tax at Tractor Supply Co. It has an advertised fuel consumption of about .7 gallons/hour at 50% load. That means that we can run loads of up to 2,750 watts for about 7 hours on a 5-gallon tank of gas. Fuel capacity is 6 gallons. Be sure to buy your generator early at home-improvement stores, Northern Tool and other outlets to avoid the rush. 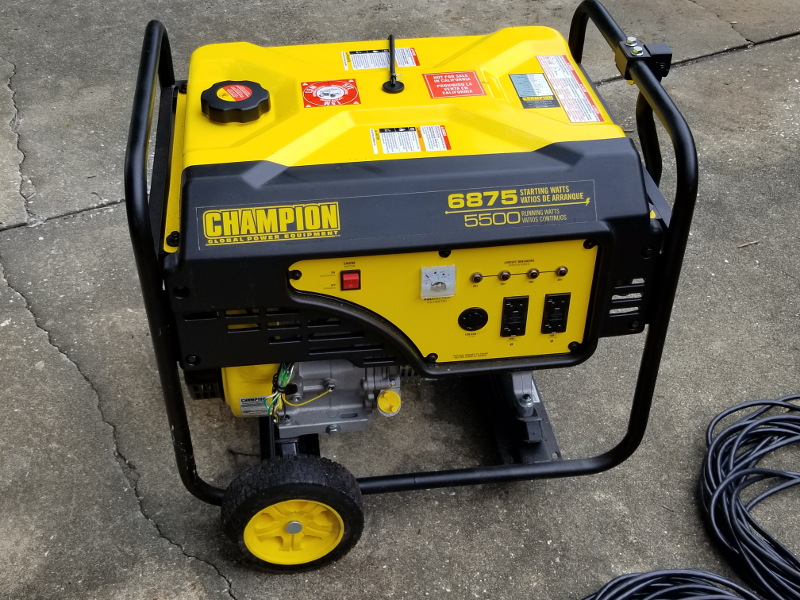 Generator fuel consumption is important, especially with limited resources during a hurricane or other weather events. No power during the storm is certainly dicey. Not knowing how long the power will be out requires a conservative, disciplined mindset and pacing.

We have 5 gallons in the generator tank and a bit over 10 gallons in two gas cans. Five-gallon plastic gas cans are the hot ticket since they are fairly easy to handle. Anything bigger and they get too heavy to lift and pour without making a mess. We’ve spent about $36 for generator gas. What we don’t use in the generator, will go into the car and mower after the storm.

Adding it up, we have a total of about 21 hours of continuous power if the load stays under 2,700 watts usage. Running the generator for a couple of hours to keep the fridge working then enduring the tropical late-summer humidity and heat in Orlando the rest of the time helps you stretch your available gas as long as possible. Naturally, lower loads make the gas last longer.

How do you stay under that 2,700-watt threshold? How do you even know how much power you are using?

Get Yourself a Kill-A-Watt

By far the easiest way to keep an eye on your power consumption is the use a Kill-A-Watt meter. This little $21 gadget gives a readout of watts used by anything plugged into it, up to 1875 maximum. You can also selectively display voltage, amperage, line frequency and kilo-watt-hours. It was convenient to simply connect the Kill-A-Watt to the end of the main extension cord where it comes into the house. The loads were then plugged into the Kill-A-Watt. You might pick up a second Kill-A-Watt to be able to monitor a second extension cord. 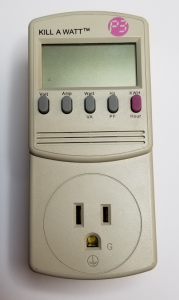 Last year, one happy revelation was the power used was actually lower than I expected. As I recall, the fridge/freezer, the 32-inch big screen, cable box, cable modem/router, a couple of box fans, a couple of Linux laptops and several LED or compact florescent lights added up to around 1000 watts. Modern big-screen (LCD and LED) tech uses a lot less power than the old cathode ray tube (CRT) TVs. Likewise, the LED lights use significantly less electricity than the more traditional incandescent. Use these to your advantage during emergency operations. Naturally, keeping the fridge going is critical for cool drinks and ensuring your food stays fresh.

After the last storm, it was sure nice to be able to cook things. We used a Presto 1,500-watt electric griddle and a small six-cup coffee maker, outside on a makeshift table. Since the Champion generator has four 120-volt outlets, it was easy to plug the griddle right into the front panel. We didn’t monitor the wattage of the cooking devices. During evening hours, we used a 50 watt-equivalent LED utility light for cooking duties. From my experience, the griddle works great for making breakfast, lunch and dinner. You’ll have to supply your own culinary skills and imagination to keep your crew happy. Remember, when the going gets tough, tasty food definitely boosts morale.

Power Banks and Your Car

Modern cell phones are able to connect to the internet over WiFi or the cellular network. As long as your cell phone has power, you’ll likely be able to communicate with the outside world. Cell sites have been beefed up in recent years and typically have backup power, to survive the worst weather. Now we just need to keep the cell phones running. You can even watch The Weather Channel and local news channels with the Spectrum app.

Power banks are an option. My nervous daughter went to Target and picked up a 4,000 mAh backup power bank. I have the home-built 15,000 mAh battery bank (for the robotic skull), an extra no-name 5,000 mAh power bank and a smallish 2,200 mAh power bank from Radio Shack.

The battery banks and cell phones are easily charged when the generator is running, so it becomes a simple logistical process. A dedicated power strip makes connecting all the chargers easy.

Another option is to use the car power outlet. Ten years ago, I bought a 400-watt (800-watt peak) inverter at Home Depot for about $50. I used it to power a laptop that played DVDs for the kids, on road-trips to the Midwest. Now it serves as a low-power backup to the generator. 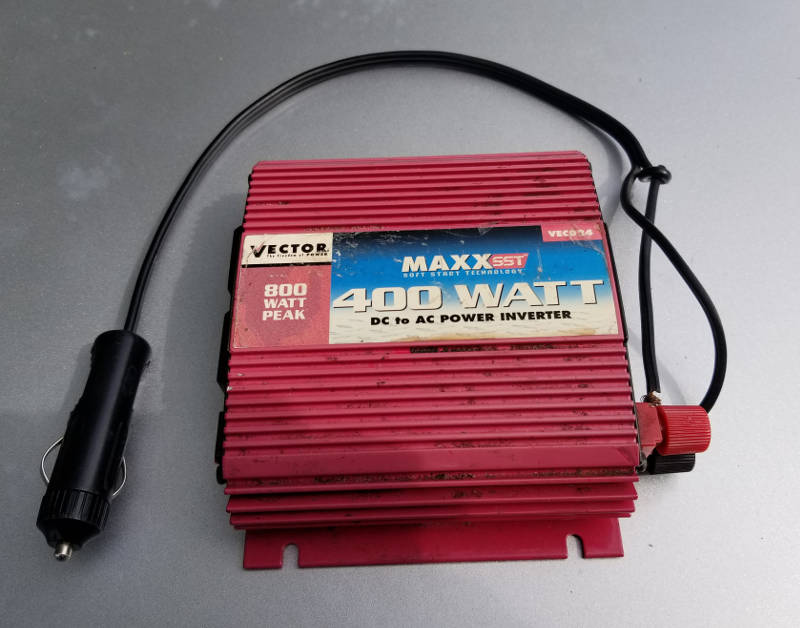 Last year, instead of running the generator, I just had family members plug their chargers into a power strip going into the inverter when running low on cell phone power. They could also cool off with one of the fans while waiting or talking on the phone. Running the car once in a while for 15 minutes or so is enough to replace the power consumed by the chargers and fan.

The inverter can easily run several LED lights and a fan or two, if needed. Powering anything over a combined 150 watts will require a direct connection to the car battery instead of through the plug-in car power outlet. Otherwise, you’ll likely blow the power outlet fuse. Use the Kill-A-Watt to keep an eye on your loads.

As of Tuesday noon, Dorian has dropped down to a Category 2 hurricane (96 to 109 mph sustained winds), with possible tropical storm force winds in Orlando, Wednesday morning. At this point, I’m not anticipating any power outages. We are still ready to quickly switch to “emergency operations” mode, if the track brings it closer to us.

Preparation and taking action while you have time have a direct effect on your comfort or even survival. Hurricanes are serious and demand respect. Fortunately, off-the-shelf hackers tend to be well organized, can logically project possible situations out in the future and have the drive to get what needs to be done, done.

And yes, of course, the traditional hurricane 18-pack (this time Miller High Life) is chilling in the fridge.