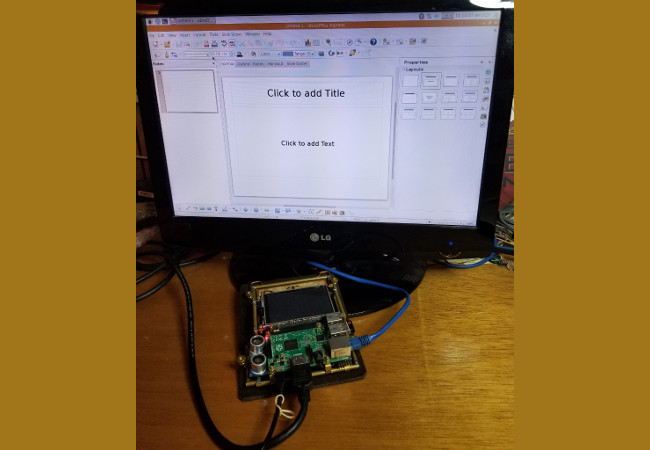 I’m feverishly prepping my steampunk conference badge (v5) for an upcoming tech talk at OSCON in July. My presentation covers badge build details, the various features and my thought processes surrounding the design. I’ll wear it as I walk around the conference, running a short “Dr. Torq” promo video, before the presentation.

A dramatic opening is a time-honored way of starting a session talk, particularly when it involves hardware. Making it memorable is important for a positive audience experience.

The plan I came up with is to stand at the back of the room, dressed in my steampunk top hat, tweed jacket and paisley tie and greet attendees as they file in for the talk. At show time, I’ll walk to the front of the room, remove the badge, still running the video, from around my neck and plug it into the projector. After a quick reboot and a few inspirational words, we’ll launch into my show.

Do you think anybody will notice that the LibreOffice slides are running on the badge that I was just wearing?

Experience shows that there are lots of things that might go wrong, causing me to fumble around with the badge and hold up the whole operation. Not a positive way to captivate the audience.

I decided to use a little automation magic, morphing from badge to desktop mode, to head off erupting into a huge presentational fireball. You have to love Linux on a wearable.

Flip Between LCD and HDMI

The badge has a Raspberry Pi 2, a 3.5-inch color LCD touchscreen, some sensors and a steampunk-themed chassis and nameplate. You can plug a big screen or projector into the HDMI connector.

The most reliable way I’ve found to flip back and forth between the 3.5″ display and the HDMI port on a Raspberry Pi is to move a configuration file between directories and reboot.

And, here’s the code for hdmi.sh.

They run from the command line as follows:

Of course, this approach has drawbacks. You look kind-of goofy carrying around a keyboard with a wearable Linux conference badge. Not only should it be headless (without a monitor), it should also be keyboardless when hanging from your neck.

What happens if I just want to shut the badge down and don’t have the keyboard handy? We don’t want to corrupt the SD-card on the Pi, by just pulling the plug.

Not only that, using the “-r”, reboot option doesn’t allow time to unplug or plug in the monitor before Linux starts back up again.

A very practical solution is to use a couple of buttons to run the appropriate scripts. We should also change it to halt the system, with the “-h” option, so I have an opportunity to switch cables or just pack the badge for transport.

In the current configuration, the Raspberry Pi uses the SPI pins, plus GPIO pins #24 and #25 to control the LCD screen (SCK, MOSI, MISO, CE0, CE1). We might also use GPIO #18 for dimming the display. That still leaves 20 GPIO pins for possible button usage.

I chose GPIO #16 and GPIO #20 for my shutdown buttons. The buttons were wired from Ground to each respective pin through a 1K Ohm resistor. I used the built-in pull-up resistors in the Pi, so as not to have funny behavior due to floating (random voltage) pin readings.

Once the hardware pins were ready, I used a Python script to detect when a button was pushed.

To make the scheme automatically work after a reboot, I added Python script execution to the /etc/rc.local file. You have to use sudo when editing the file since regular uses don’t have the proper permissions.

On bootup, the switch-down.py Python script loops forever in the background, waiting for one of the two buttons to be pushed.

Now when I walk to the front of the room and push the HDMI button, the badge will switch over to desktop mode. I’ll unplug the battery, plug in the projector and power up with a wall wart.

After my presentation, I’ll push the LCD button and the badge will revert to “walking around” (badge) mode. I’ll unplug the wall wart and projector. I’ll reposition the badge around my neck and power back up with the battery pack.

I’ve tested the LCD/HDMI switch process quite a few times, and it works very well. Of course, the procedure and timing will be fine-tuned in the dress rehearsals.

I’m thinking it might be good to automatically run the promo video on the 3.5 inch LCD screen when powering back up in badge mode.

Using buttons for the badge mode interface has a lot of possibilities. We aren’t limited to micro-switches. Would a pen and contact be useful? Don’t know. Or, how about magnetic reed switches. Would a multi-button wired pendant make sense? Maybe we could use that to control slides. We can sense the button presses in any number of ways using Python scripts or even the Processing language.

Go out and harness the power of Linux automation in your next wearable project.

Rob "drtorq" Reilly is an independent consultant, writer, and speaker specializing in Linux/OSS, physical computing, hardware hacking, the tech media, and the DIY/Maker movement. He provides a variety of engineering, business and special project services to individual clients and companies....
Read more from drtorq
SHARE THIS STORY
RELATED STORIES
The Dropbox GitHub Data Breach Chronosphere Nudges Observability Standards Toward Maturity Are Monolith CI/CD Pipelines Killing Quality in Your Software? LaunchDarkly: Feature Management Is a Must-Have Case Study: How Dell Technologies Is Building a DevRel Team
TNS owner Insight Partners is an investor in: Torq, Flip.
SHARE THIS STORY
RELATED STORIES
Red Hat Helps Make Kubernetes Security More Accessible Grafana Shows New Observability Projects at ObservabilityCON Case Study: How Dell Technologies Is Building a DevRel Team Discord vs. Slack: Which Is Right for Your Team? Devs Are Excited by ActivityPub, Open Protocol for Mastodon
THE NEW STACK UPDATE A newsletter digest of the week’s most important stories & analyses.
The New stack does not sell your information or share it with unaffiliated third parties. By continuing, you agree to our Terms of Use and Privacy Policy.