Meet Olli, the Electric Self-Driving 3D Printed Shuttle You Can Hail with a Smartphone 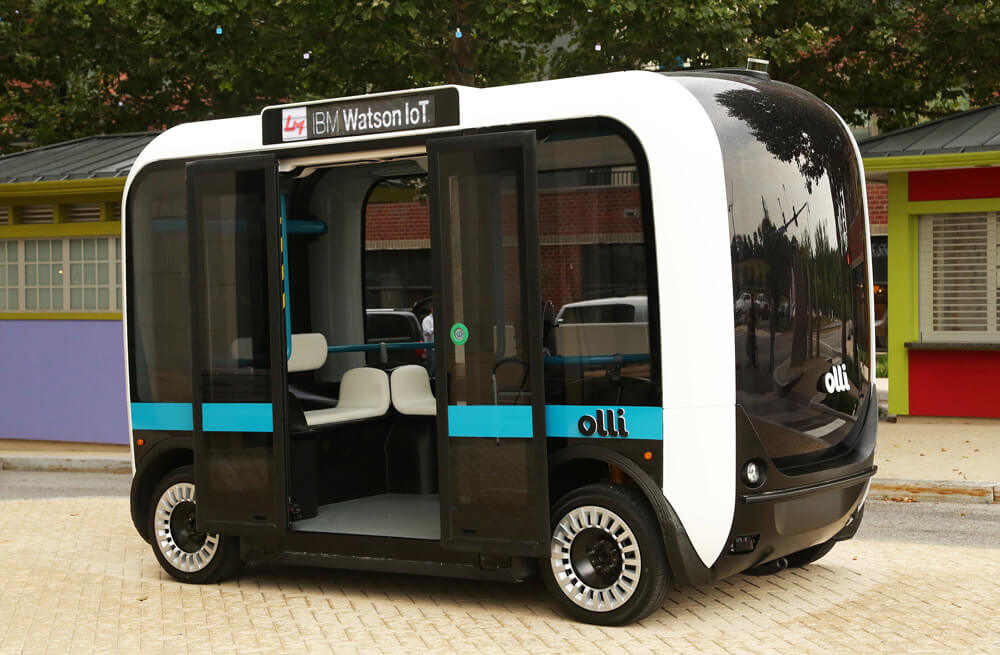 As the problem of traffic congestion has grown in the last decades, so has the variety of technologically oriented solutions across the globe. Companies like Uber and Lyft are concentrating their efforts on growing the ride-sharing market, while others are investing in intelligent driving systems, such as automated highways that group and connect cars into electronically timed “platoons,” thereby reducing traffic. 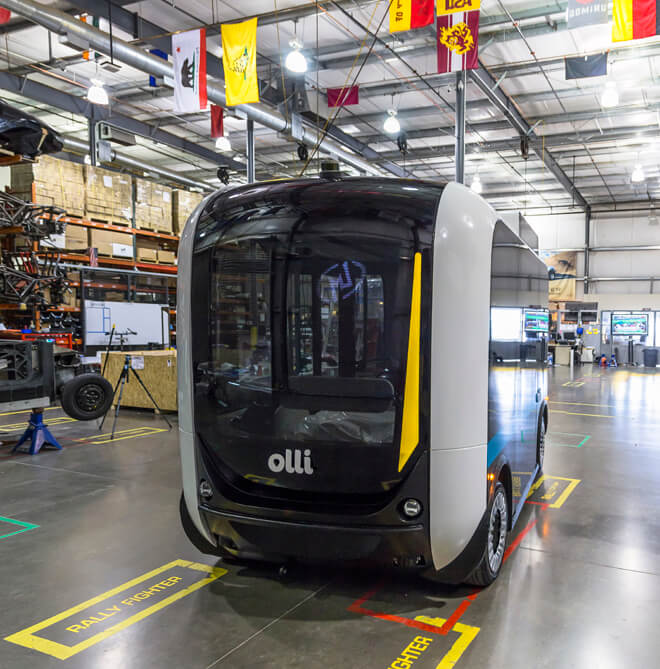 A 3D printed minibus that talks

Sporting the perky moniker Olli, the electrically powered vehicle is made out of 3D printed parts and is capable of carrying up to 12 people at a time. The AI underpinning Olli will allow it to interact with passengers, such as answering questions about the time remaining to a destination, planning routes, and even recommending landmarks or restaurants to visit.

For the near future, the autonomous bus will run only in the National Harbor neighborhood as part of a summer-long pilot program offering free trial rides to visitors, who can install an application to tell the shuttle to come pick them up. 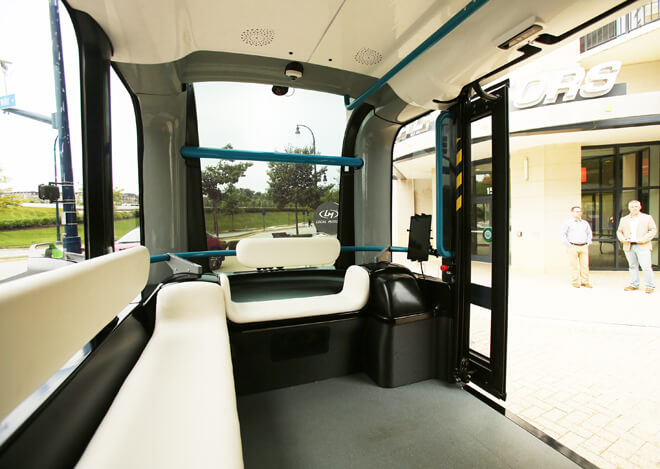 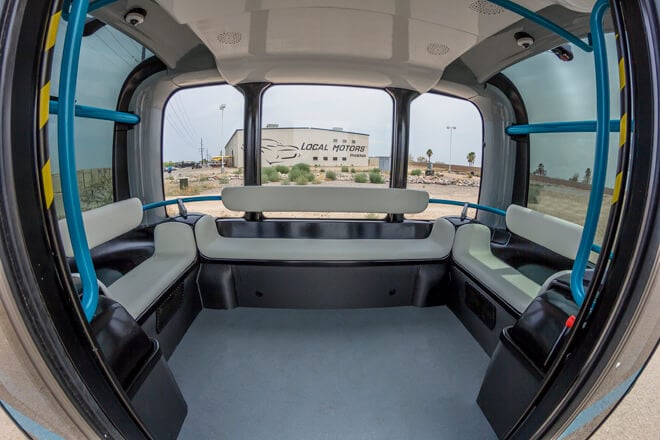 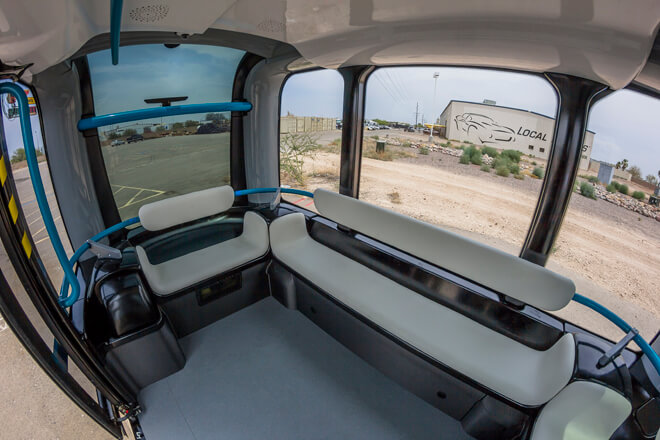 But one of the project’s main goals is to test the cloud-based cognitive computing capabilities of IBM Watson’s Internet of Things (IoT) platform to analyze and learn from the large amounts of transportation data that will be collected from more than 30 sensors that are installed on the bus. Besides public transportation, the company envisions that Olli can be used as a chartered shuttle, taxi service or operate as an inter-linked network of mobile pods transporting people through the city.

According to the company, to ensure a smoother and more individualized interaction experience, the vehicle will utilize four Watson developer APIs, ranging from speech-to-text, text-to-speech, natural language and name-entity recognition technology.

“Cognitive computing provides incredible opportunities to create unparalleled, customized experiences for customers, taking advantage of the massive amounts of streaming data from all devices connected to the Internet of Things, including an automobile’s myriad sensors and systems,” said Harriet Green, general manager of commerce and education at IBM Watson Internet of Things. “IBM Watson IoT cognitive computing capabilities [will provide] a unique, personalized experience for every passenger while helping to revolutionize the future of transportation for years to come.” 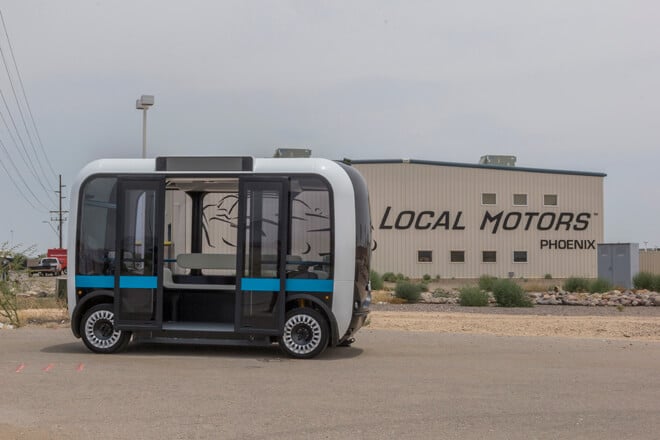 Microfactories and the Future of Manufacturing

Besides building the world’s first autonomous on-demand minibus that you can hail via your smart device, Local Motors is also one company pioneering a novel approach to manufacturing that leverages an open community of crowd-sourced talent and rapid prototyping technologies to upend the conventional paradigm about economies of scale. Instead of spending scads of money to make a million iterations of the same product before it’s fully tested in the commercial market, the company selects one design submitted by contributors from around the world in exchange for royalties, and sells these designs before manufacturing a much smaller production run in their “microfactories.”

“Our microfactory is capable of doing things 5 times faster and with 100 times less capital than everything else in the industry doing these kinds of complex cyber-mechanical devices,” explained Local Motors co-founder and CEO John B. Rogers, Jr. on Singularity Hub. The company can make products on an as-needed basis, without the need to keep an inventory, making small-scale microfactories an essential component in this agile approach to design.

The company is now working with officials to bring Olli to Miami-Dade, Las Vegas and Denmark. No doubt this exciting new possibility for self-driving public transport needs to be fully tested on the road — and fully secured on the growing (but vulnerable) Internet of Things. But we have to admit, the daily commute looks a lot less hellish with a fleet of smart vehicles that can not only chauffeur you around, but that can also come pick you up. Might it portend a shift from today’s traffic-choked urban centers to a car-free future, where people can someday rely on a comprehensive, city-wide and non-polluting smart shuttle service to get them around? Only time will tell.

SHARE THIS STORY
RELATED STORIES
Making It Easier to Build Apps with Time Series Data What Is Edge Computing? What Is Multi-Access Edge Computing? 9 Supply Chain Security Best Practices Edge Computing vs. Cloud Computing
TNS owner Insight Partners is an investor in: The New Stack.
SHARE THIS STORY
RELATED STORIES
How New Sony AI Chip Turns Video into Real-Time Retail Data What Is Edge Computing? Pinterest: Turbocharge Android Video with These Simple Steps Edge Computing vs. Cloud Computing Performance Measured: How Good Is Your WebAssembly?
THE NEW STACK UPDATE A newsletter digest of the week’s most important stories & analyses.
The New stack does not sell your information or share it with unaffiliated third parties. By continuing, you agree to our Terms of Use and Privacy Policy.