Only 3% of the active open source community is women. A University of Tennessee researcher found that harassment drives female contributors away. She offers ideas for creating more inclusive environments.
May 31st, 2021 6:00am by Jennifer Riggins 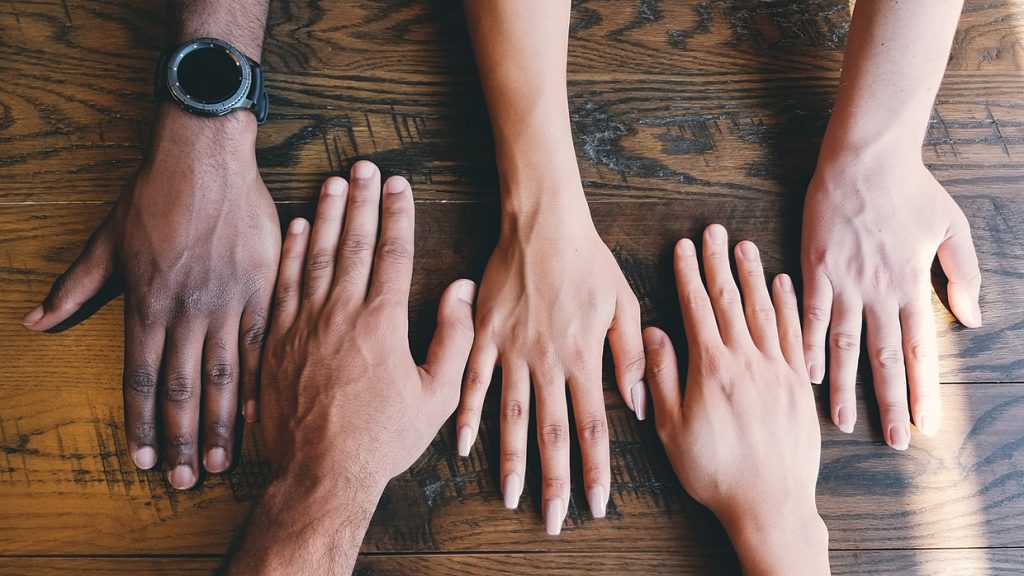 Photo by Clay Banks on Unsplash.

We know that there are countless reasons to recruit and retain more diverse teams, including that diverse teams are proven smarter, more productive, and more innovative. Plus, building a diverse team allows products to be actually made by the users they are intended for.

Yet, while women make up half the U.S. workforce and a still-shameful 20% of the tech industry, they make up less than 3% of open source communities. This, as Vandana Singh, associate professor at the University of Tennessee, pointed out in a recent Linux Foundation online discussion, must change.

Over the last few years, there have been concerted efforts — and ample funding — to increase all definitions of diversity, equity and inclusion (DEI) in open source. But they’ve failed to move the needle. Singh, who has researched open source communities for more than 20 years, has uncovered some reasons why these DEI efforts fail and what could help stem this unwelcome trend. 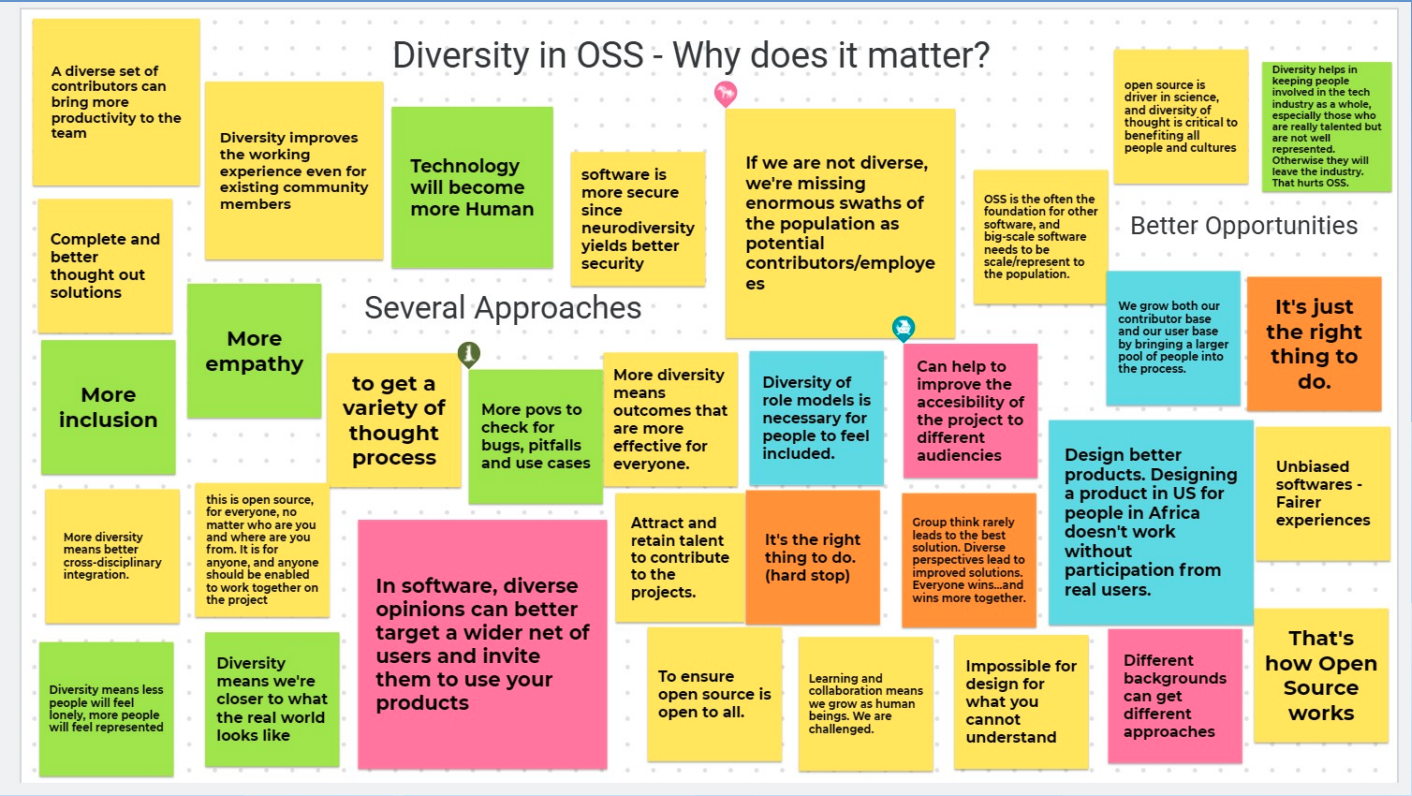 There are clear motivators to contribute to open source software (OSS) that range from learning new technical skills to gaining experience in core skills like managing software teams. OSS can provide fantastic opportunities for networking and finding new jobs. And it’s one of the rare situations — if you’re contributing to an open and public project — where you can get proof of code and experience.

Yet for more than 20 years, that pitiful 3% has remained stagnant. Why?

Part of this is the nature of the job — contributing to open source projects is often unpaid volunteer work. Those underrepresented in the tech industry, including women, bear the lion’s share of unpaid care work already, so don’t have time to be forking for free. Every inequity was amplified in 2020 when, among other things, as TrustRadius reported, the pandemic saw women in tech 1.6 times as likely to be laid off or furloughed as men, and 1.5 times as likely to report feeling a greater child care burden.

And for the small percentage of OSS contributors who are actually getting paid to contribute, they typically work for an enterprise or nonprofit that is sponsoring the project, often large entities that have their own diversity problems that trickle down.

But it’s more than that.

Singh’s research specifically cites a combination of anecdotal and empirical research that shows “hostile, discriminatory and predatory experiences of women and underrepresented minorities.”

Which means, in Singh’s words, “We are creating, rather, perpetuating, social inequality. So people who are in these communities are missing out on these benefits and opportunities of participating in OSS.”

The Open Source Initiative board is having elections and a number of women are running.

They are already getting targeted harassment.

It’s not a pipeline problem. pic.twitter.com/4JxOiKvTey

In 2019, a group of women ran for the board of the Open Source Initiative, which is a powerful OSS entity, best known for approving open source licensing. These candidates were all subjected to harassment — mostly anonymous — having been deemed “threats” to the community.

They are not alone. There is a documented pattern of female contributors to open source — at all levels — becoming easy targets for harassment. This not only drives women to leave open source at even a higher rate than the tech industry as a whole, but it also discourages them from participating at all.

First, she worked to counter the argument that these stories are only anecdotal evidence, by aiming to generate and examine empirical evidence that could, and was, published in academic software journals. Singh’s research, much of which was published at the end of 2020, is the first empirical work on open source diversity that The New Stack has found since GitHub touched on it in its 2017 Open Source Survey.

It’s important to note that Singh’s surveys and interviews were of those who self-identified as women who were actively contributing to open source projects, a pool that doesn’t include other groups marginalized by the tech industry, or former OSS project contributors.

The first key takeaway of her research is that all women feel the impact of the scarcity of their gender in open source, and all women contributors feel isolated.

“The feeling of isolation is not just about that ‘I’m the only one, but also, when ‘I’m in the room and, as the only one, then I’m asked to be representative of all women everywhere,’” Singh said, pointing to a logical business demand for more representation and diversity of ideas and experiences.

Singh shared an anecdote paraphrasing an email she and the university’s ethics research board got in response to her first survey.

She said the respondent wrote: “In your survey, you’re asking what product I contribute to and which country I’m from, and by putting those two together, anyone can identify me because I’m the only one in my country who is in that product who is also a woman.”

No Room for Error

A majority of open source participants Singh studied also referenced their first experience with OSS, which appears critical. A combination of welcoming, helpful mentors and what Singh refers to as “safe spaces” (such as hackathons) are essential to making this onboarding successful and making it likely that the participant would continue working on OSS projects.

Singh said women also consistently reference feeling like they constantly have to prove themselves. This means they feel they have no room for error, and often do extra work to justify their participation.

“The example a woman shared was that ‘If I write a patch, then I write a whole lost list of ‘This is what I know. This is why I did it. This why I think it worked,'” the researcher said. “Because, if a man posts it, he just says ‘Here’s the patch and it will work.’”

Another surprising result of her research is how much women consider codes of conduct even before making their first contributions. They look for:

With this in mind, Singh’s next research project focused on fostering those safe spaces and optimizing codes of conduct.

Singh went on to perform a website content analysis on 350 open source, women-centric, online “safe spaces.” It was a heterogeneous mix of listservs, internet relay chats, blogs, Twitter pages, and discussion forums. The shared goals of these communities included:

She then zoomed in on content analysis of five forums with 10,698 messages and 1,344 participants, going back up to 18 years, looking for the ways women provide support to each other.

These forums, Singh soon realized, act as safe spaces for social, emotional, informational, and technical support: “They help each other to succeed in the hostile OSS environment by sharing experiences, expertise, and opportunities.”

Discussions of frustrations and hostilities were prevalent across all forums examined, so Singh focused on how this support helped ameliorate those experiences, and determined these spaces achieved just that.

Finally, Singh shared part of her yet-to-be-published study of discrimination and hostility within open source project forums. Open source communities are distributed and voluntary, so they often aren’t monitored very well. In these forums, the researcher found that harassment of women is common, ranging from micro-aggressions to threats of rape and death. The pervasive behavior leads to women abandoning open source together.

Singh has gotten pushback from peer reviewers for her forthcoming study, she said: “This one just focuses on the misogyny and the harassment and the discrimination, and that’s a tough pill to swallow.” She may choose to self-publish it, she added, forgoing the publication credit to keep her research intact.

Can Codes of Conduct Help?

The researcher also analyzed how codes of conduct (CoC) are written and enforced. This is the set of rules or norms an organization sets out that clarifies its mission, values, and principles, while also outlining consequences when behavior goes against them.

She found that not all OSS communities even have codes of conduct or they are copy-pasted generic ones. The most successful codes of conduct, she found, were not generic but customized for its audience.

If diversity is valued by a community, specific types of diversity should be named. (The Contributor Covenant, a popular code of conduct for open source communities, is notable for its inclusive language.)

But a CoC remains only words unless accountability and enforcement are baked in, Singh said: Who will act when violations are reported, when will they act, and what will they do?

“There’s a key indicator to enforce: we see you, we value you, we do not tolerate XYZ,” she said.

And the first half of 2021, from the Free Software Foundation’s controversial decision to bring Richard Stallman back to its board, to Basecamp’s recent employee exodus, has made it extra apparent that a solid CoC must include what happens if someone in the governing body violates the norms.

OSS Diversity Starts with Measuring Everything 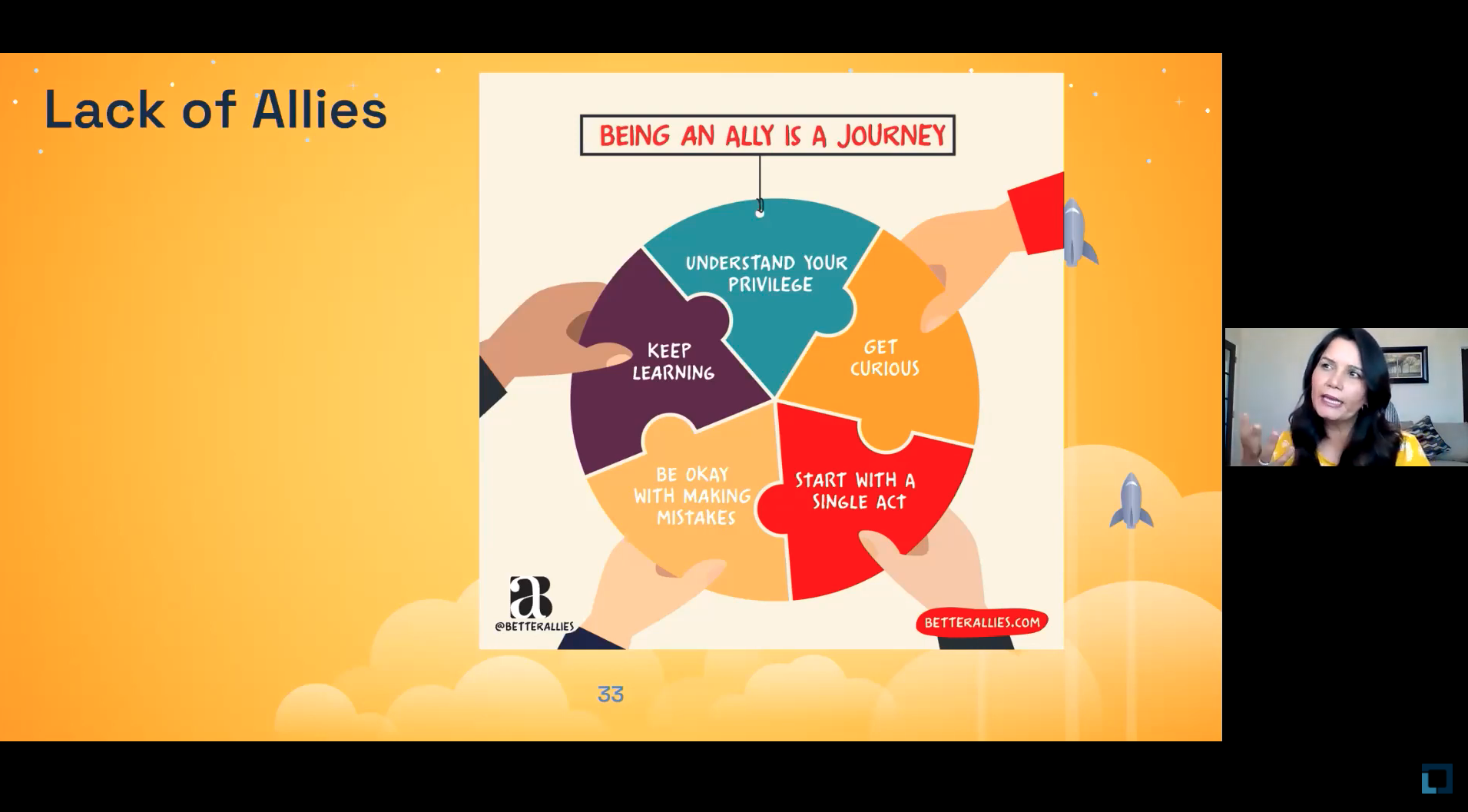 Some open source communities are working hard to recruit and retain a more diverse member base that feels a sense of belonging, Singh said. She name-checked:

So what makes these ones work, when so many open source organizations fall short? And where can we help them succeed? How do we make it so everybody has a fair chance, increasing equity?

We have to find solutions that work for different groups of people, Singh said. “It has to be iterative problem-solving. DEI is not a big bang approach, where we can just do a big thing and be done with it. That’s not how it works. We have to be consistent in our commitment and we have to continuously improve.” 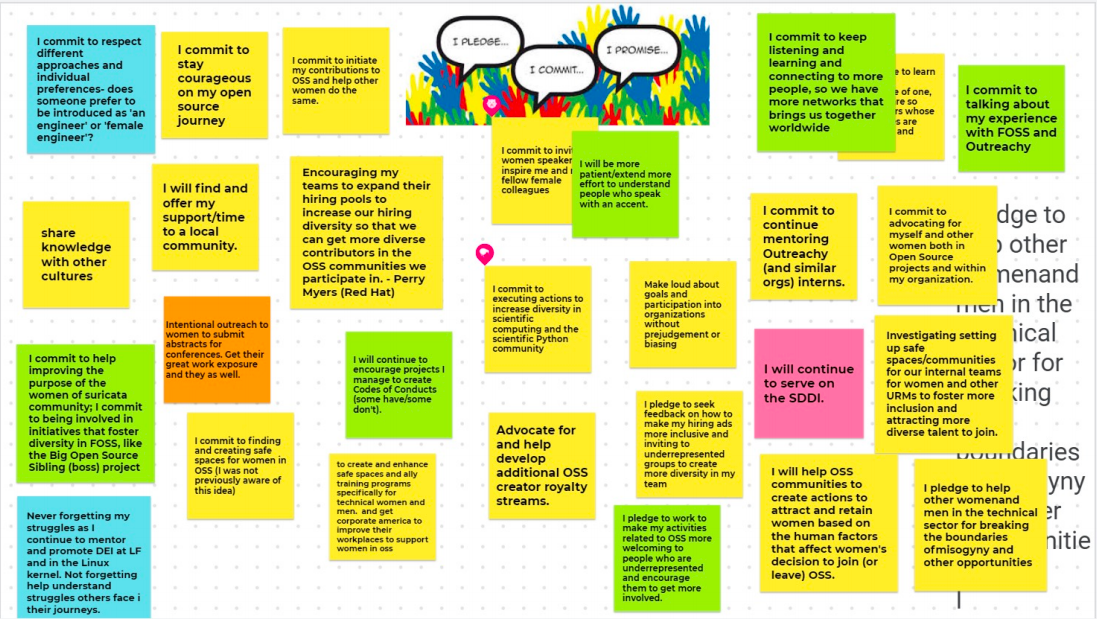 As a group, the participants in Singh’s livestream event defined DEI dimensions to monitor. Select metrics for diagnosis, including representation, recruitment, retention, and pay, whenever possible. These goals can’t be based on return on investment, the researcher said, but rather on moving the needle.

The metrics need to be adapted as the environment changes, Singh said. “For example, we will have to deal with the long-term impact of COVID on people and their lives. The remote work situation. People working from home. People’s children staying at home. As situations are changing, we have to build these into our metrics of diversity and inclusion.”

Once you’ve established your baselines and started measuring whether or not that needle moves, she says it’s most important to publish your own diversity report and reaffirm your commitment. Because not enough research is being published on this topic yet.

Singh offers areas to start. These include:

Jennifer Riggins is a culture side of tech storyteller, journalist, writer, and event and podcast host, helping to share the stories where culture and technology collide and to translate the impact of the tech we are building. She has been...
Read more from Jennifer Riggins
SHARE THIS STORY
RELATED STORIES
A Leg-endary Year: Top 5 Internet Technology Stories of 2022 It Happened to Me: How I Suddenly Owed AWS $13,000... Op-Ed: The Rise of AI Content Generators Is an Affront to Creativity Donald Knuth's 2022 'Christmas Tree' Lecture Is about Trees Why Your Code Sucks: Common Excuses for Bad Programming
The Linux Foundation is a sponsor of The New Stack.
TNS owner Insight Partners is an investor in: The New Stack.
SHARE THIS STORY
RELATED STORIES
Why 'Explainable AI' Can Benefit Business A Leg-endary Year: Top 5 Internet Technology Stories of 2022 How Not to Waste a Senior Hire 5 Ways ChatGPT Could Supercharge Chatbots How to Support a Million Users on Your Website: A Success Story
THE NEW STACK UPDATE A newsletter digest of the week’s most important stories & analyses.
The New stack does not sell your information or share it with unaffiliated third parties. By continuing, you agree to our Terms of Use and Privacy Policy.