Open Source Contributions on the Rise in FinTech, Healthcare and Government 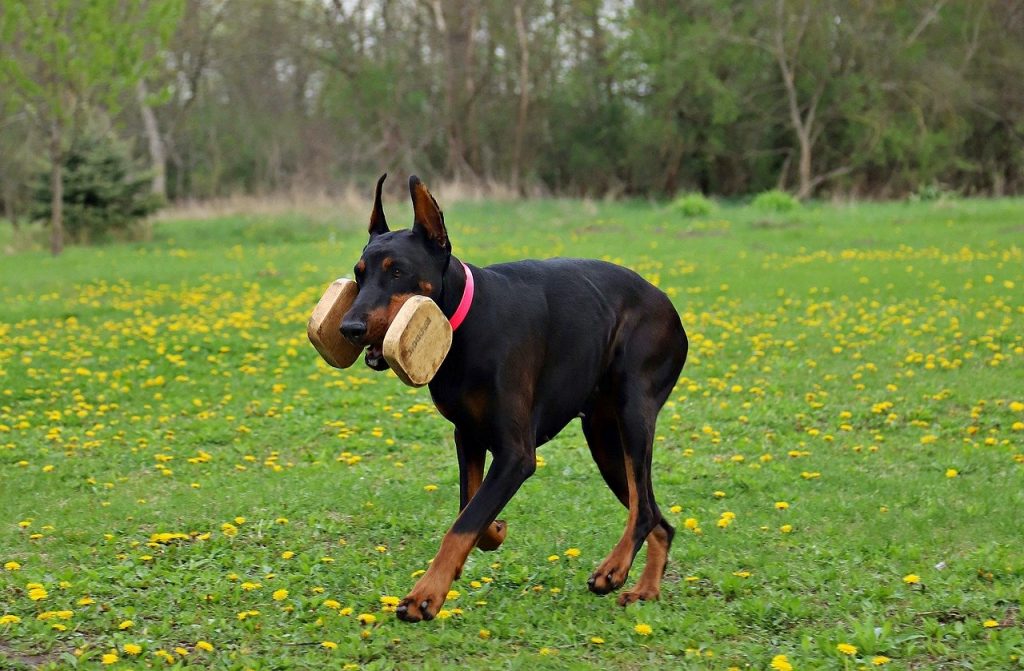 Enterprise use of open source remains stable, and a new generation of companies are increasing their engagement with open source communities. Led by financial services, healthcare and government, more organizations across most industry verticals are regularly (frequently or sometimes) contributing to upstream projects, going from 42% to 46% over the last three years.

In partnership with The Linux Foundation’s TODO Group, The New Stack surveyed over 1,000 technologists in May and June 2020 for its third annual “Open Source Programs in the Enterprise” study. The multi-year effort provides a solid baseline for measuring change, growth and effectiveness of efforts to guide corporate open source policies and community participation. A description of the study’s methodology can be found on GitHub and at the bottom of this article.

Yes/no questions about open source usage are increasingly irrelevant; for the second year in a row, 85% of organizations that use open source do so in commercial products. The growth of open source in the enterprise is better viewed in terms of engagement with the open source community. More organizations are regularly creating projects and collaborating across open source projects and/or foundations. Collaboration is particularly effective when it happens upstream — that is, when the actual software development occurs in a community repository instead of a forked repository focused on the needs of a single vendor. 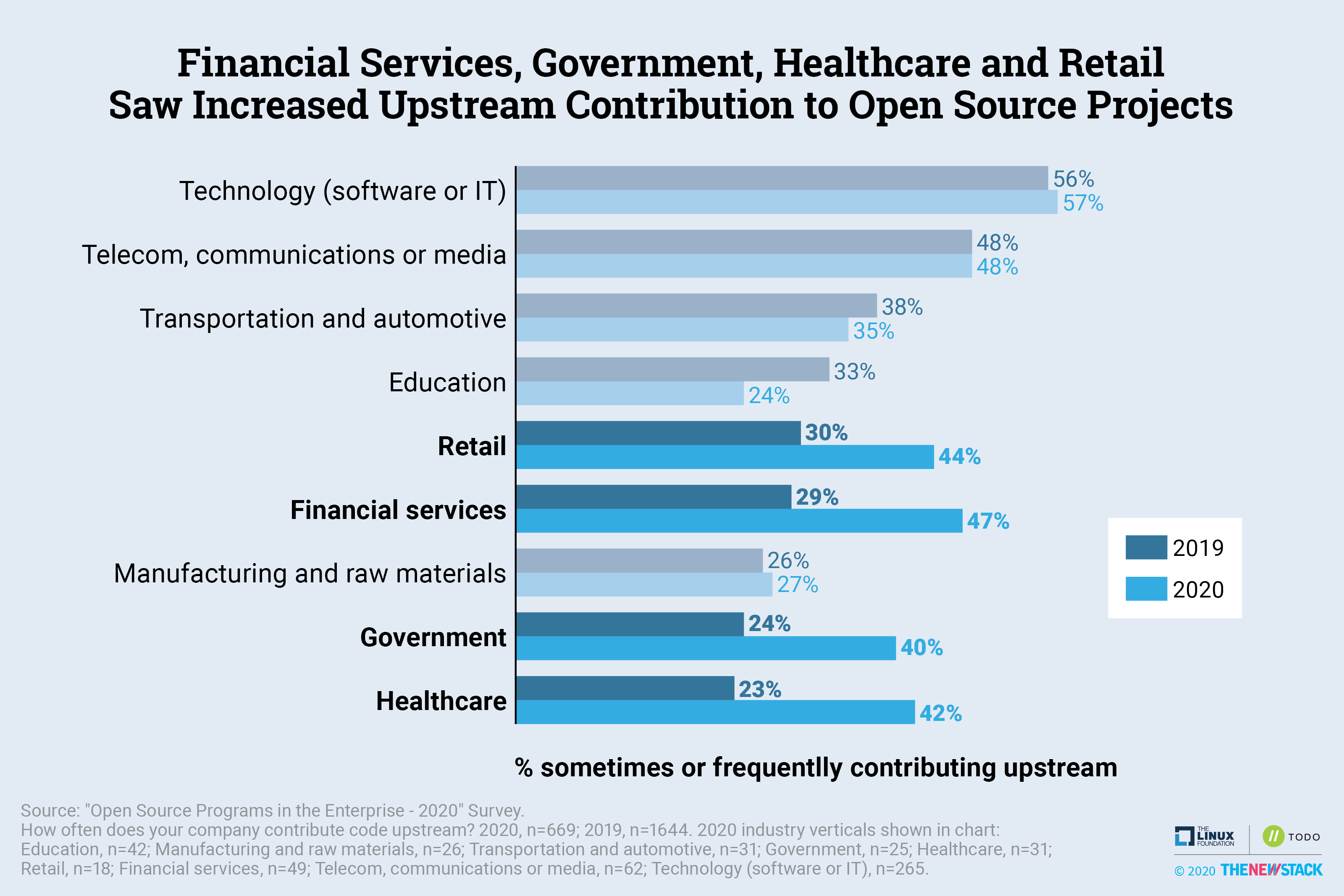 Financial services, healthcare and government all saw increased involvement with open source. Almost half (47%) of financial firms said they regularly contribute code upstream, a jump from 29% last year. Forty-three percent of participants in finance said their organizations have an open source program or initiative, up from 23% in 2019. The big swing in the numbers is partly because of variation in the sample; last year’s findings were presented to the Fintech Open Source Foundation, a group that has since come under The Linux Foundation’s umbrella.

Healthcare (42% vs. 23% in 2019) and government (40% vs 24% in 2019) organizations are also much more likely to be regularly contributing to upstream projects. The increase is likely due to initiatives related to the COVID-19 pandemic. However, these industry verticals are less likely than others to have a formal policy governing use and contribution to open source. For example, on average 48% of respondents said there is a formal policy regarding employees’ contributions to non-work-related open source projects in their personal time, but that figure drops to 31% among the healthcare cohort. The recent creation of Linux Foundation Public Health can help both healthcare and government organizations adopt best practices and policies that increase engagement even further.

Retail saw the fourth largest increase in open source involvement over 2019, however the sample size (18 respondents) from this industry vertical is too small to draw a strong conclusion. In this sample, retail actually saw a decrease in their use of open source software in commercial products while the other industry verticals all saw increases.

Large organizations and those with an open source program office (OSPO) are the most likely groups to support upstream contributions with a formal policy. Hopefully, the best practices established by these companies will filter down to smaller organizations that may not have the budgetary capacity to support even an informal management initiative that addresses upstream contributions. 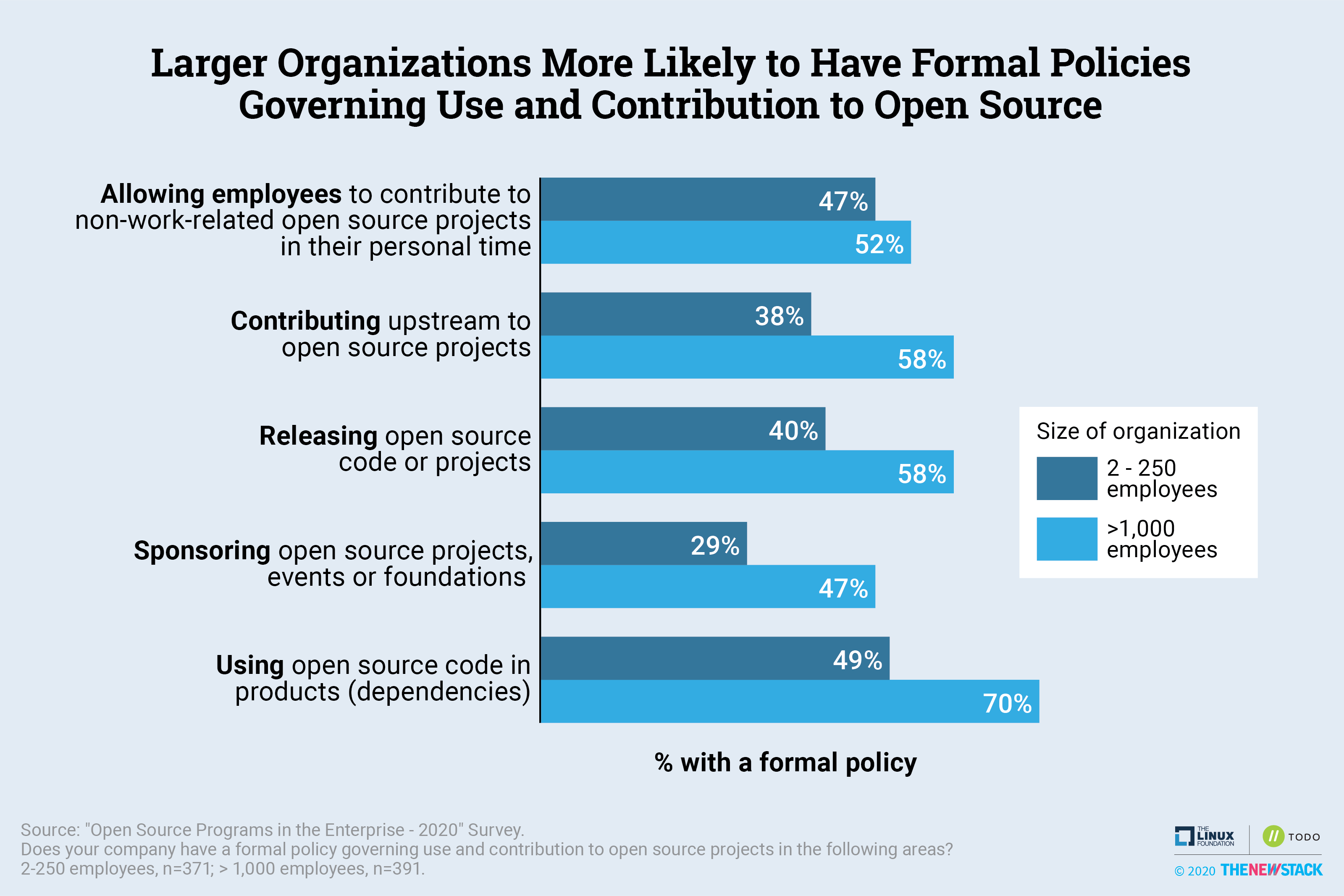 After screening and data cleanup, the report is based on 1,026 people that participated in the survey, which The New Stack conducted from May 5, 2020, to June 15, 2020. Respondents were solicited via social media and email lists from The New Stack, as well as the survey sponsors (The Linux Foundation’s TODO Group and VMware).