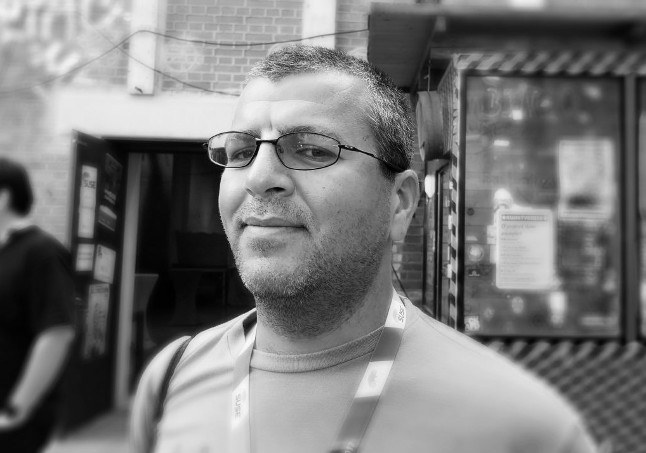 Andrew Wafaa is a well-known face of the open source world. He has been instrumental in many game changing projects and products. He currently works for ARM, but with the amount of work he has done on openSUSE, there is a running joke that “Andrew gets paid by ARM to work on openSUSE.”

Wafaa is also famous for displaying his outrageous fashion sense at major open source events. At one point the openSUSE team had to remove one of the event images due to an automatic thumbnail focusing on the wrong area!

Unlike many open source professionals, Wafaa didn’t start with open source. He had a very humble beginning. He left school at the age of 17 and joined the Royal Air Force Regiment with only O-level/GCSE qualifications. He started working with the airline industry as a baggage handler in 1996 and worked up the ladder to become a consultant advising startup airlines. While he was working with the airline industry he also started dabbling with Linux, sometime around 2003.

But the U.S. terrorist attacks on September 11, 2001, made Wafaa rethink his decision to work within the airline industry and so he looked into changing industries.

Wafaa was aware of the immense potential of Linux in the enterprise, but he had no enterprise experience in Linux so he did a four-week crash course hoping to gain the Red Hat Certified Engineer accreditation but just missed out, walking away with the more advanced Red Hat Certified Technician. He then worked as a low-level desk support for a government agency, then joined Sun Microsystems to offer L1, L2 support, in 2004.

At Sun, only two people on the site were working on Linux support whereas everyone else was working on Solaris, so Wafaa and his coworker decided that Wafaa would look after SUSE and the other would look after Red Hat. That’s how Wafaa got involved with SUSE and openSUSE communities. Back in those days, SUSE was owned by Novell.

Wafaa was a heavy contributor to many new projects including packaging Hula Server for SUSE. He also got heavily involved with the Gnome team in openSUSE.

When Intel’s Moblin mobile Linux project came along, Wafaa created an openSUSE port for it. Later, when Moblin morphed into MeeGo in 2010 he ported openSUSE to create a project called Smeegol (SUSE MeeGo Linux). What could have been a leading open source mobile project died prematurely as the Linux Foundation raised trademark flags and the project moved to the back burner. Over time, MeeGo died anyway.

While the Moblin and MeeGo projects led to dead ends, it did expose Wafaa to more SUSE technologies. “This was not a solo affair, but more of building on the work that many within SUSE had been doing as part of their commercial product. I was playing with early access to SUSE Studio and found it to be a great tool to build a distribution,” said Wafaa.

Recognizing his involvement with openSUSE, in 2011 Wafaa was elected to the openSUSE board in 2011. He was elected for the two terms and was then appointed as treasurer of the board. He has been a member of the board for over six consecutive years now.

Before joining ARM, Wafaa worked for Fujitsu. At one of the openSUSE Conferences in 2011, Wafaa and some openSUSE developers casually discussed over beers Canonical’s Ubuntu support for the ARM architecture. Why couldn’t openSUSE also support? Soon after, he took up the challenge to help create an ARM port for openSUSE.

“My first big project with openSUSE on ARM was getting openSUSE to run on Samsung Chromebook without any script or work around. It was an actual port,” said Wafaa. As he worked on the openSUSE port for ARM, he ended up getting hired by ARM where he worked as part of ARM’s Strategic Alliances team, which looked at key areas that ARM needed to engage with. Since Open Source was Wafaa’s primary focus he was engaged with a variety of communities and open source projects.

The work that Wafaa did on ARM led to last year’s announcement of the first 64-bit operating system for Raspberry Pi. Both openSUSE and SUSE Linux Enterprise are now fully supported on Raspberry Pi 3. Thanks to his enabling and the work of the openSUSE community implementing work, enterprise customers looking at ARM-powered data centers can now build super inexpensive developer environments with Raspberry Pis to build enterprise-grade SLES powered system. SUSE offers one year of free subscription of SLES to Raspberry Pi users.

A few months ago, Wafaa changed roles at ARM and now he is looking after ARM’s upstream engineering contributions to open source projects. ARM created a new position for Wafaa called Software Director for Enterprise, Communities.

“The intention is to make sure that ARM is a first-class open-source citizen. ARM doesn’t necessarily have the best reputation of working in the open-source community. We acknowledge that, and we want to change and improve at that position,” said Wafaa.

The Linux Foundation and Red Hat is a sponsor of The New Stack.