The new group’s leader says it will support creation of an open source engine for building digital wallets. Plus: results from a survey of Europe’s open source community.
Sep 14th, 2022 8:13am by Heather Joslyn 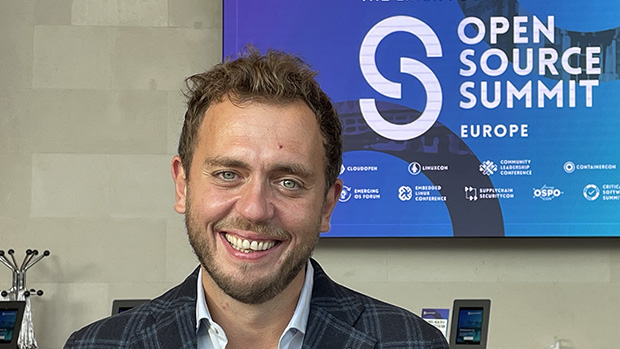 DUBLIN — On the heels of its first survey of Europe’s open source community, the Linux Foundation announced Wednesday that it is launching Linux Foundation Europe, seeking to build on its growing presence on the continent.

The new organization will be led by Gabriele Columbro, currently executive director of FINOS, the Fintech Open Source Foundation. The announcement was made during the keynote addresses here at Open Source Summit Europe.

There are three reasons why creating a European organization made sense to the Linux Foundation, Columbro said. The first is the existence of a central governing body, the European Union, that could help align disparate initiatives: “Europe is the only region where there is a supra-national entity … that really defines common goals in terms of innovations, as well as the rules of the road for collaborations across nations.”

Secondly, Columbro said, Europe already has a strong grassroots community for open source but is very “open source forward” from a policy standpoint.

Broadly, he suggested, Europe’s technologists overtly value “the idea of the ‘digital commons’ as a way to really create open sources of public good, and create collective value. And it’s slightly different from the United States — where, of course, the commercial dynamics of open source are much more prevalent.”

The third motivation for created Linux Foundation Europe, Columbro said, ” is really one of just opportunities.” Individual contributors, the private sector and the public sector “could use the experience that the Linux Foundation has developed over the last 20 years to really accelerate, leveraging the full collaborative process.”

A Plan to ‘Disrupt’ Digital Identity

The fledgling organization counts some heavy hitters among its first slate of members more than 15 members: the consulting giant Accenture, the telecommunications company Ericsson, the home appliance maker Bosch, software companies SAP, SUSE, and TomTom, the London Stock Exchange Group and the Bank of England. Columbro is looking ahead to making a couple of hires in the coming months and assembling a board of advisers.

He’s also looking forward to the first major project Linux Foundation Europe has announced: the Open Wallet Foundation, an effort to develop a secure, open source engine that anyone can use to build interoperable digital wallets for a variety of use cases. Daniel Goldscheider, founder and CEO of yes.com, an open banking ecosystem, originated the initiative.

“The Linux Foundation has a track record of creating open ecosystems — whereby you replace closed ecosystems with open ecosystems,” Columbro said. “Digital identity is a major area ready for disruption.”

Take, for instance, the differences he — an Italian living in California. — observed how EU countries and the U.S. handled Covid vaccine verification. The European Union created a digital certificate to track residents’ vaccinations and allow them to travel more safely and easily. Whereas, in America, dog-eared, handwritten cards bearing the Centers for Disease Control logo remain the make-do solution to the same problem.

“That was a big wake-up call to really show how, not only in financial services, not only in sort of telco and automotive but also on the healthcare side of the house, there is a huge need for a potential standardization of an engine that can allow digital identity, digital certificates to be managed in a standard way,” said Columbro.

“I’m really glad that this is the first project out of [Linux Foundation] Europe because I think it’s a very high-potential project.”

Columbro, who said he will also continue as FINOS’ chief during a transition period over the next 12 months, said he plans to relocate from the U.S. to Europe.

The Linux Foundation also announced the results of its first-ever survey of the European open source community, a project that had been announced at Open Source Summit North America in June by Hilary Carter, vice president for research at the Linux Foundation.

Nearly half — 47% — of respondents said the value of open source software to their organizations has increased over the previous 12 months. Survey participants in the Netherlands were most likely to say so, at 61%.

However, only 29% of survey participants said they have seen an increase in contribution efforts at their organization over the previous 12 months.

Closing this gap, said Columbro, will be part of Linux Foundation Europe’s mission — with messaging aimed at not only about how to contribute to open source, but why an organization should.

In his work in the financial industry, he said, he found it necessary to stress the business value proposition of open source: that open source code is free, that’s transparent, and that it can be used again and again. For businesses concerned about their bottom line, he noted, “transparency and reuse are sort of the main motivators, but not really actively driving social change.”

Data collection for the survey was conducted in May and June by Linux Foundation Research and Scott Logic, with results taken from 1,198 survey participants and interviews 15 individuals from a variety of industries and countries. Half of the participants identified as developers or software engineers; the next largest group, 12% of the survey pool, said they work in systems administration.

Among the survey’s other findings:

The survey cited other reasons that they believe keep developers within their organizations from contributing to open source projects. Here are some of the findings, including which actions they most believed could spur greater open source contributions by their colleagues.

Of those participants who said they contribute to open source projects in their personal time, 78% said personal development and learning was influential, while 64% cited their enjoyment of collaborating with peers. Only 48% said the prospect of career advancement influenced their free-time open source work.

“We noted an emerging theme that Europeans have a ‘romantic’ relationship with open source, while those in North America have a more commercial relationship,” the report’s authors stated, “A repositioning of open source to unlock more commercial value without losing the community-minded aspects would benefit the European economy.”

Heather Joslyn is features editor of The New Stack, with a special interest in management and careers issues that are relevant to software developers and engineers. She previously worked as editor-in-chief of Container Solutions, a Cloud Native consulting company, and as...
Read more from Heather Joslyn
SHARE THIS STORY
RELATED STORIES
Why a Twitter Founding Engineer Is Now All-in on Mastodon What TypeScript Brings to Node.js Bryan Cantrill: What’s Next for Infrastructure, Open Source and Rust Anil Dash on Mastodon Joining Fastly’s Open Source Program Build Your Own Decentralized Twitter, Part 3: Hello Mastodon
The Linux Foundation is a sponsor of The New Stack.
SHARE THIS STORY
RELATED STORIES
Netlify Acquires Gatsby, Its Struggling Jamstack Competitor Top 5 Internet Technologies of 2022 2023 Web Tech Check-in: React Performance, PWAs, iOS Browsers Redis Looks Beyond Cache Toward Everything Data Log4j: Why Organizations Are Failing to Remediate This Risk
THE NEW STACK UPDATE A newsletter digest of the week’s most important stories & analyses.
The New stack does not sell your information or share it with unaffiliated third parties. By continuing, you agree to our Terms of Use and Privacy Policy.