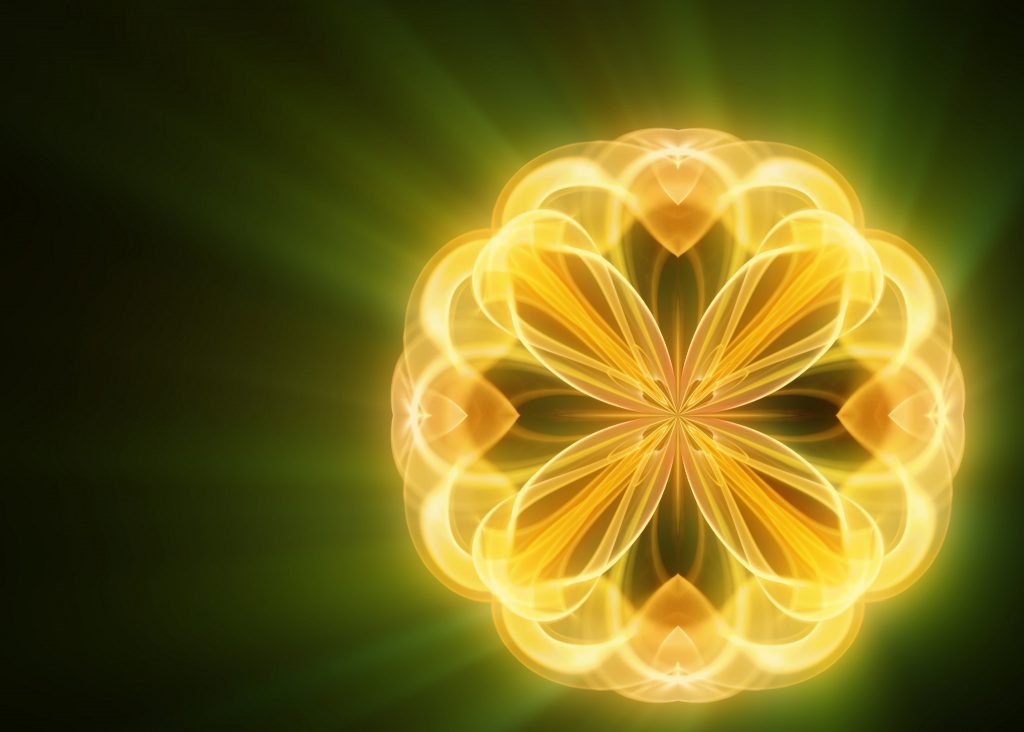 Feature image via Flickr Creative Commons.
This is part two of our posts about implementing controllers with OpenStack. Part one explored SDN’s scale out effect on OpenStack Neutron.

The integration of OpenStack and OpenDaylight (ODL) is a hot topic, with abundant, detailed information available; however, the majority of these articles focus on explaining usage aspects, rather than how the integration is implemented.

In this article, we’ll focus on detailed implementation of integrating the differing components. Here are some extremely useful references:

From these links we can summarize the complete setup process as follows:

There are also excellent videos which demonstrate the step-by-step process of integrating OpenStack and OpenDaylight.

Integration of OpenStack and OpenDaylight

Figure One: OpenStack and OpenDaylight Integration

As introduced in SDN Controllers and OpenStack, the modular layer 2 (ML2) plugin for OpenStack Neutron is a framework designed to utilize the variety of layer 2 networking technologies simultaneously. The main idea behind the ML2 plugin is to separate the network type from the mechanism that realizes the network type. Drivers within the ML2 plugin implement extensible sets of network types (local, flat, VLAN, GRE and VXLAN), and mechanisms to access these networks.

In ML2, the registered mechanism drivers, which are typically vendor-specific, are called twice when the three core resources — networks, subnets and ports — are created, updated or deleted. The first call, typically referred to as a pre-commit call, is part of the DB transaction, where driver-specific states are maintained. In the case of the OpenDaylight mechanism driver, this pre-commit operation is not necessary. Once the transaction has been committed, the drivers are called again, typically referred as a post-commit call, at which point they can interact with external devices and controllers. 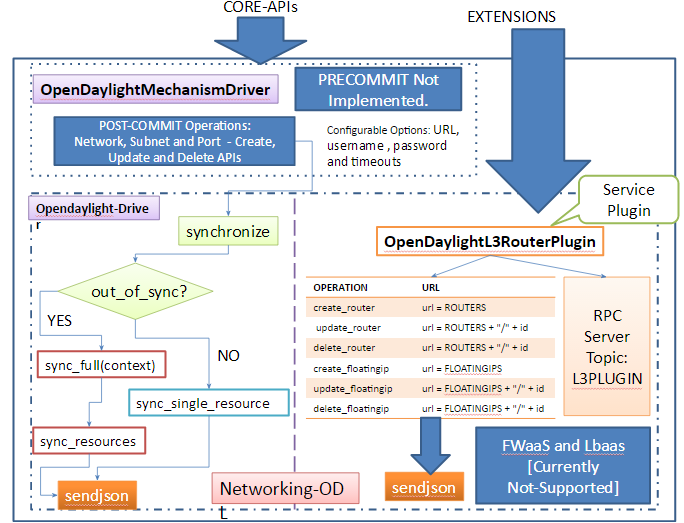 Mechanism drivers are also called as part of the port binding process, to determine whether the associated mechanism can provide connectivity for the network, and if so, the network segment and VIF driver to be used.

The OpenDaylight mechanism driver receives the calls to create/update/delete the core resources (network, subnet and port). It forwards these calls to the OpenDaylight driver class by invoking the synchronize function. This function, in turn, invokes the ‘sendjson’ API.

Similarly, the OpenDaylight L3 router plugin class handles the L3 APIs to create/update/delete the router and floating IPs. Hence, the final call for both the core and L3 extension APIs is “sendjson” – which sends a REST request to the OpenDaylight controller and waits for the response.

In the next section, we’ll see how OpenDaylight handles these REST calls. 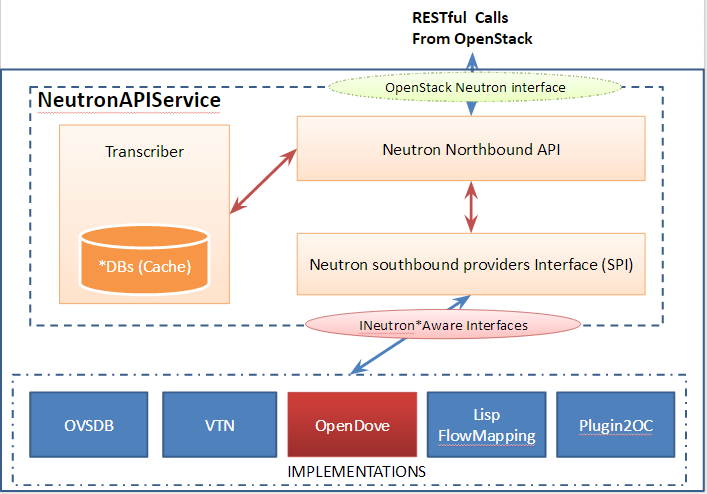 This bundle handles the REST requests from the Openstack plugin and returns the appropriate responses. The contents of the Northbound API bundle can be described as follows:

This is the most important bundle that links the northbound APIs to the appropriate implementations. The Neutron southbound protocol interface (SPI) bundle includes the following: 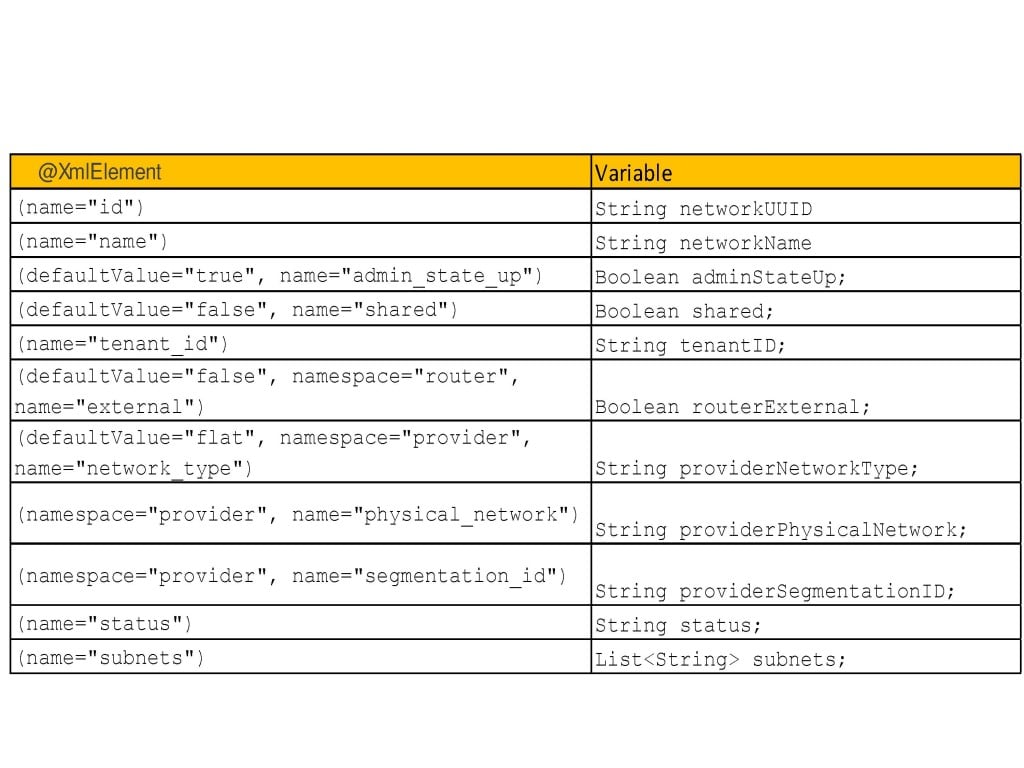 The transcriber module consists of a collection of Neutron*Interface classes, which implement the INeutron*CRUD interfaces for storing Neutron objects in caches. Most of these classes include a concurrent HashMap. For example, private ConcurrentMap<String, NeutronPort> portDB = new ConcurrentHashMap<String, NeutronPort>() – and all the add, remove, and get operations work on this HashMap.

The exact mechanism involved in these handlers depends on the southbound plugin they use: OpenFlow (1.0 or 1.3), OVSDB, LISP, REST (OpenContrail), etc. Let us use the example of a NeutronNetworkCreated handler in VTN Manager. The steps involved in this handler can be summarized as:

For the actual operations, the Neutron component of VTN manager invokes VTN manager’s core function, which in turn uses the OpenFlow (1.0) plugin to make necessary configurations on the OpenFlow switches.

Using All Bundles for Network Creation 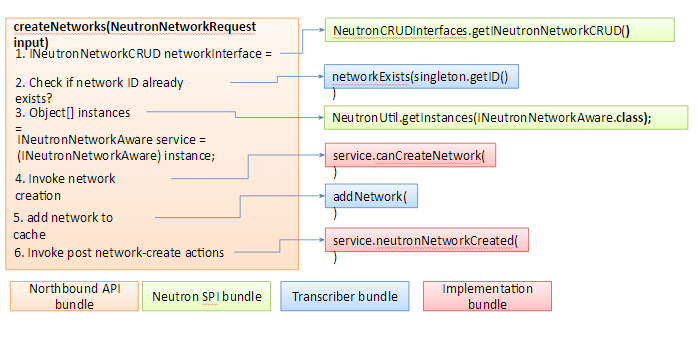 Figure four above briefly summarizes the process involved in network creation, and the corresponding calls in all of the above described bundles of the Opendaylight Neutron implementation. This figure should help the reader understand the control flow across all the bundles.

In summary, OpenDaylight is one of the best open source controllers for providing OpenStack integration. Though the support for load balancer and firewall services is still missing, the freedom of multiple implementations and support of complete core APIs itself provides immense advantage and flexibility to the administrator. In the near future, we can expect OpenDaylight to support all the extensions of OpenStack to achieve the perfect integration.

Sridhar received his Ph.D degree in computer science from National University of Singapore, in 2007; M.Tech. degree in computer science from KREC, Suratkal, India, in 2000; and B.E. degree in instrumentation and electronics from SIT, Tumkur, Bangalore University, India, in...
Read more from Sridhar Rao
SHARE THIS STORY
RELATED STORIES
Open Source Underpins a Home Furnishings Provider’s Global Ambitions Retrospective: Why Was Cloud Foundry at KubeCon? Do You Need a Managed Database? How Paylocity Scaled Up Community in the Cloud with MongoDB Can Observability Platforms Prevail over Legacy APM?
TNS owner Insight Partners is an investor in: Juno.
SHARE THIS STORY
RELATED STORIES
OpenTelemetry Properly Explained and Demoed The Latest Milestones on WebAssembly's Road to Maturity Does Your Database Really Need to Move to the Cloud? Spotify's Backstage: A Strategic Guide Can Observability Platforms Prevail over Legacy APM?
THE NEW STACK UPDATE A newsletter digest of the week’s most important stories & analyses.
The New stack does not sell your information or share it with unaffiliated third parties. By continuing, you agree to our Terms of Use and Privacy Policy.