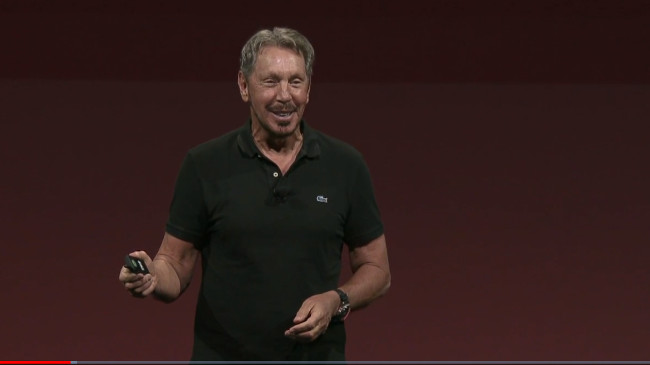 Although late to the cloud market, Oracle is hoping its new cloud offerings will appear to enterprises through cost-effectiveness. While the company has not started an outright price war in the market, it has picked some battles around high availability and reliability, touting them as included features, not premiums added on top of instance charges on a per-minute basis.

The company has also enhanced its cloud support for containers, and introduced a serverless service, based on the work done by Iron.io, that can work as a drop-in replacement for Amazon Web Services’ Lambda.

Oracle can offer high availability storage at a fraction of the cost of Amazon, at least when performance guarantees are factored in, claimed Kash Iftikhar, vice president of Infrastructure as a Service, and public cloud services at Oracle, speaking at the company’s Oracle OpenWorld user conference this week. “As we compare our storage prices as compared to [Amazon Elastic Block Storage] prices. We are able to provide significantly more performance at astounding price comparison, Iftikhar said.

Oracle can offer these numbers due, in large part by the new hardware it is acquiring, said Iftikhar. The Oracle cloud offers large numbers of SSDs, high-performance multi-core processors, and nVidia P100 GPUs. “Oracle is going to come up with a very differentiating pricing structure for cloud pricing,” said Iftikhar. “That is going to be a very disruptive model for the cloud industry as it relates to providing services.”

The service chain is built on the Oracle in-cloud Kubernetes service for orchestration. Kubernetes is an open source container orchestration tools originally developed by Google and now managed by the Cloud Native Computing Foundation. This is tied together with a continuous integration and continuous deployment platform created with the assets from Oracle’s Wercker acquisition, coupled with a private Docker registry service.

The service ties into GitHub, Slack, and other modern development tools, allowing teams to collaborate and build inside Oracle’s cloud while using the outside services they’ve already adopted.

“You can use any component individually,” said Quillin. “You can build applications, push natively to a registry, and push to a Kubernetes platform. This is all built on the open Kubernetes standards for version 1.7. We have a Docker V2 compliant registry. This is a fully open stack approach to this container native world.”

Quillin also said that Oracle is announcing the open source availability of Fn. This Apache 2 licensed project is targeted at bringing serverless computing onto any platform. In its current form, developers can deploy Amazon Lambdas to Fn, and run them in other cloud environments.

Fn comes from some of the work done by the Oracle team on Iron.io. Fn will also integrate with Cloud Foundry.

“Fn is an open approach focusing on functions as a service,” said Quillin. “You can run it on a laptop, or on any cloud. It was originally meant to run independently of Oracle Cloud Infrastructure. It’s going to eventually run service on top of it, but that’s not announced yet.”

Fn supports Go, Ruby and Java, said Quillin. (As of press time, there is no word on whether or not fn supports Python, which Lambda does support). “The philosophy was to come up with something we could push to the development community to start a conversation around open standards for serverless. Serverless is one of the next big areas. We’re hearing from customers if they’ve already chosen Docker and Kubernetes, what’s next? How do I choose my platform.”

Additionally, Fn functions can be chained together in an orchestrated way, said Quillin. “You can bring in an Amazon Lambda function and import it into Fn. It will convert it to an Fn function. We kept a generic interface around HTTP puts and gets.”

Elsewhere at OpenWorld, Oracle co-founder and Chief Technology Officer Larry Ellison introduced the company’s plans for an adaptive intelligent database offering. He griped about the lack of performance guarantees in other clouds and promised that Oracle’s autonomous database would self-optimize and self-heal.

Banking on the Cloud

Ellison had already hinted at more machine learning-based automation capabilities on the company’s quarterly reporting conference call. That report asserted that Oracle will earn about $1.4 billion in cloud revenue in the first quarter 2018.

The previous four quarters saw $4.5 billion in cloud-based revenue for the company. That’s divided, however, between software, and actual IaaS and PaaS earnings, and SaaS earnings.

SaaS earnings continue to outpace IaaS and PaaS earnings for Oracle. SaaS currently accounts for $1.0 billion of the current quarterly revenues and has been growing around $100 million per quarter.

Actual IaaS and PaaS revenues, however, remain almost flat over the last two quarters, for Oracle, with $397 million in fourth quarter 2017, versus $400 million in the first quarter of 2018.

A 20 year veteran technology journalist, Alex Handy cut his teeth covering the launch of the first iMac. His work has appeared in Wired, the Atlanta Journal Constitution, and The Austin American Statesman. He is also the founder and director...
Read more from Alex Handy
SHARE THIS STORY
RELATED STORIES
Kubescape: A CNCF Sandbox Platform for All Kubernetes Security 8 GitHub Actions for Setting Up Your CI/CD Pipelines How Yarn Workspaces Accelerated LinkedIn Code Delivery Using DORA Metrics to Optimize CI Pipelines Engineering Best Practices of CI Pipelines
TNS owner Insight Partners is an investor in: The New Stack, Docker.
SHARE THIS STORY
RELATED STORIES
The Main Goal: Secure the Application Workload Engineering Best Practices of CI Pipelines An Inside Look at What GitLab’s Web IDE Offers Developers Kubernetes CI/CD Pipelines Explained Interest Growing in Dart and Flutter for Mobile
THE NEW STACK UPDATE A newsletter digest of the week’s most important stories & analyses.
The New stack does not sell your information or share it with unaffiliated third parties. By continuing, you agree to our Terms of Use and Privacy Policy.