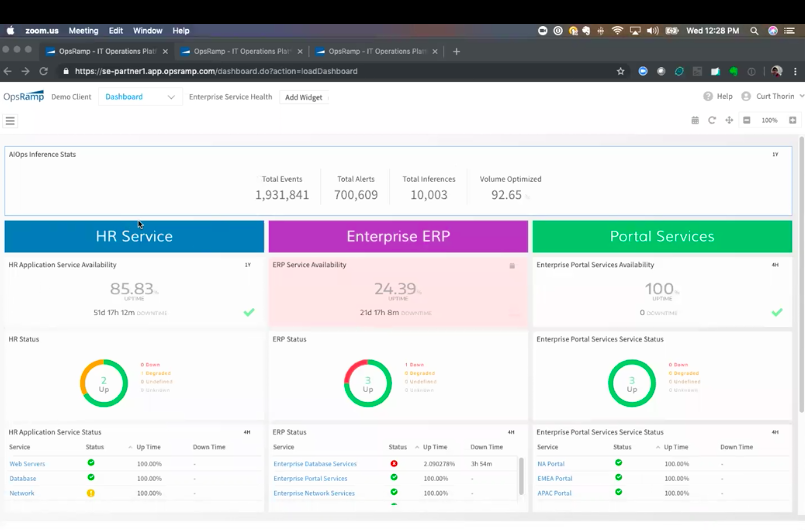 In this demo, we see firsthand how OpsRamp was created to serve as an AIOps platform to monitor and analyze what the company describes as complex and often disparate hybrid infrastructures. These infrastructures might typically span across several data cloud environments or data centers on container or monolithic platforms — which OpsRamp condenses into a single console interface.

Taking us on this demo tour are Jordan Sher, senior director of marketing at OpsRamp, and Curt Thorin, an OpsRamp solutions consultant.

This demo was set up to emulate the volume of incidents generated at a typical organization, totaling 43,000 alerts per week. “This [amount of data] is incredible for an IT team to manage. When you bring it up [with OpsRamp], it dramatically reduces the number of raw alerts that they need to deal with, which dramatically decreases the number of incidents that they need to escalate,” Sher said. “And it simplifies their life by creating these inferences, which correlate alerts, so that the business doesn’t have to do that manually anymore.”

OpsRamp’s dashboard showed, in the demo, how the AI had processed almost two million raw events originating from across a network consisting of hybrid infrastructures. The idea is to pinpoint the problem areas by “making sense of the noise we’re filtering,” Thorin said. The analysis revealed that out of the almost two million events — thanks largely to the AI analysis — only 700,000 alerts were generated. All told, 10,000 inferences were created as issues that needed to be resolved,  but “we’ve optimized 92% of it,” Thorin said.

Thorin showed how OpsRamp displays performance in “almost real-time” if there might be a memory leak or a surge in CPU usage. “I can then drill into it and start to see how we’ve modeled this service from an operational infrastructure within ops,” Thorin said. In one instance, Thorin showed how an issue was detected in a database, and more exactly, on a specific SQL clusters.

The goal of any tool or platform, of course, is to ultimately benefit an organization’s end-use customers. On a very basic level. In the online retail space, for example, OpsRamp serves as a direct conduit to aggravations an end-use customer might by automating and communicating software glitches as they occur. In the event of a consistent several-second lag for a particular on-line retail transaction online customers might be having, for example, Thorin showed how the information is rapidly communicated to the right DevOps team to take action. This functionality demonstrates how the platform was born out of a need for such a service-centric apps platform for hybrid enterprises, Sher said.

“Our company is built of folks who worked in providing them service delivery across a variety of different organizations to very big clients,” Sher said.