Oracle on What ‘Enterprise’ Means in a Cloud Native World

In this latest episode of The New Stack Makers podcast,  hosted by The New Stack founder and Editor-in-Chief Alex Williams and recorded during the recently held KubeCon+CloudNativeCon in San Diego, three Oracle technology executives discussed how Oracle’s Enterprise Manager .ontinues to evolve.
Nov 29th, 2019 3:14pm by Alex Williams and B. Cameron Gain 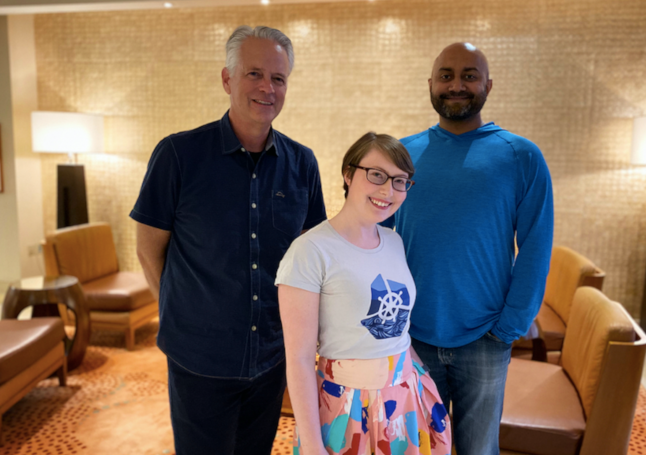 More organizations are at least looking to port some of their infrastructure to a cloud native environment. And for long-time software giant Oracle, both new and long-time customers are looking to get a better understanding of what is involved when making the shift.

In this latest episode of The New Stack Makers podcast, hosted by The New Stack founder and publisher Alex Williams and recorded during the recently held KubeCon+CloudNativeCon in San Diego, three Oracle technology executives discussed how Oracle’s cloud native services continue to evolve. They described how Oracle seeks to meet the needs of customers with container- and microservices-based deployments, as well as with the adoption of emerging platforms and tools, including service meshes.

According to recent surveys, most organizations have at least “started to adopt cloud native,” Gaekwad said. “Folks are really interested in figuring out how to use containers and how to use a managed Kubernetes service to run a lot of the workloads,” he continued. “So, it kind of signifies that the ecosystem itself is like super healthy, that perspective.”

In the cloud space, as Fields described, Oracle’s “story is different from other cloud providers, which I think is very interesting for our customers and for all of us who work there.”

“Unlike Amazon and Azure and other earlier clouds, they built something for themselves you used to help solve their own business needs, which was getting resources to their own internal employees. Then they decided to make that a public product and that’s kind of where the cloud came from,” Fields said. “For us, our customers were coming to us saying ‘we want to use this public cloud thing that Amazon and Azure and these other providers have created, but we’re seeing these problems. We want to do things like this and we would hear all this feedback. And we went ‘well, we could try and help with that.'”

What many existing customers wanted was to see what was “available in the cloud” for services Oracle was already known for, Quillin said. “They already knew about enterprise security, performance and scale that they already trusted us with, so they wanted to see that in the cloud,” Quillin said.

While also easy to forget amid the hype about cloud native and Kubernetes adoption, a very large percentage of organizations are challenged by just getting started. “I think 80% to 90% of people at KubeCon being new speaks a lot to the challenges that companies are facing and how they’re trying to address them,” Fields said. “They don’t have those skills right now to do this cloud native stuff, so they know that the gap [exists] and they’re learning that they have to help their employees learn so that they can embrace this new world.”

Removing complexities with cloud native environments has also brought to the forefront of new management tools, including service meshes.

“I think service meshes are that next level up, and in next year or two, we’ll start seeing more and more people leap into that, while managed services need to kind of help guide the way,” Quillin said. “So, I think it’s exciting to see the maturation and we’re working our way up the ladder of complexity, one rung at a time.”