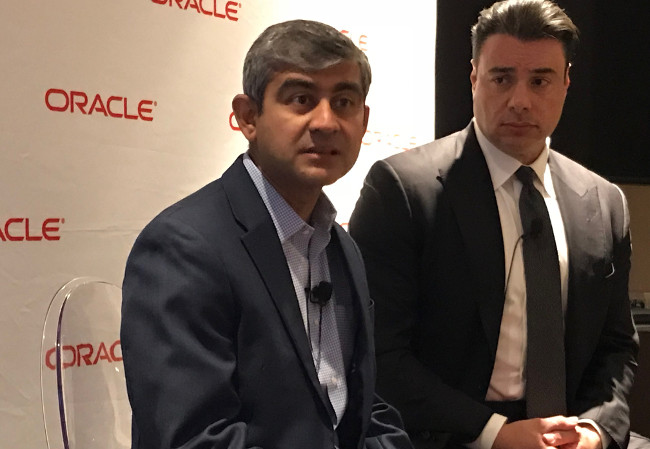 Oracle is promising to vastly simplify the management of cloud-native computing operations, debuting a number of self-managing, or autonomous, cloud services. The company has also unveiled a set of service level agreements (SLAs) that it claims puts other cloud providers to shame with additional specific guarantees around performance and manageability of cloud services.

The company introduced the autonomous concept last September, at the company’s OpenWorld user conference, with the release of the Oracle Autonomous Database, touted as “self-driving, self-securing and self-repairing.”

Now the company has expanded the “autonomous” capabilities to other Oracle Cloud Services as well, announcing them Monday, at an Oracle Cloud Day event in New York “Things that you used to do, the computer will now do the work,” said Oracle CEO Mark Hurd, during the opening keynote.

Overall, the goal of Oracle’s autonomous computing is to simplify management for enterprises. Currently, most organizations have a mess of on-premises systems that require a  lot of upkeep and maintenance, due in large part to customized enterprise software packages, Hurd pointed out. As a result, they may be hesitant to adopt cloud-based point solutions, such as Kubernetes, fearing even more complexity. Cloud providers need to step into the role of system integrators, taking care of the low-level maintenance work for individual point technologies.

“I think we need to do a better job, not just selling point products but discussing strategy,” Hurd told the audience.

“Cloud was supposed to be easier. One of the benefits of cloud is to reduce the complexity you’ve had on-prem. People have a hard time tracking how many cloud apps they are running now,” he said. “We understand that there will be a best-of-breed and an ecosystem, but to the extent that Oracle can take on the integration and complexity, we can let the customers focus on more important tasks.”

“Autonomous” means that each cloud application will be automatically upgraded and patched, with no downtime to the user. It also means that users will be able to grow and shrink the processing and storage resources based on their actual demand. On the security side, all data is encrypted and security patches are automatically applied.

Hurd’s argument before the crowd was that Oracle can take care of security patches more quickly, and more thoroughly, than its customers, who may get hamstrung by slow approval and testing cycles, and a shortage of expertise.

During the keynote, Kurian demonstrated how to set up an instance of the Oracle Autonomous Data Warehouse Cloud Service. The entire process took less than a minute. The user doesn’t have to worry about what types of disks are being used, or what types of services. They don’t have to worry about backup and recovery. Increasing performance can be done merely by adding more CPUs, either by way of a console or through a REST API. A related service, the Oracle Analytics Cloud, can suggest visualizations based on the kind of query provided.

In another demonstration of what the company calls its autonomous application platform, Chad Arimura, Oracle vice president for serverless, showed how to create a Kubernetes cluster across 36 CPUs in less than a minute. Oracle itself will manage the Kubernetes updates. The company also has provided packages of Oracle software, such as WebLogic server, on the Docker repository so they can be easily downloaded and folded into Oracle cloud operations. Those applications can be self-updating as well.

With the autonomous services, customers don’t need to worry about the specific version of the software they are using. Highly-regulated industries, such as government work, where the systems are certified to a specific version number of the software, would not be able to use this particular Oracle service, said Amit Zavery, Oracle executive vice president for product development, for the Oracle Cloud Platform.

But in general, if the organization is not worried about specific version numbers of the software it is using, Oracle is promising to take care of a lot of the headaches that go along with maintaining the software, Zavery noted. The common enterprise customer is hard-pressed to keep up with testing all the permutations of hardware and software combinations that a software update may come in contact with, he explained.

“This is where we take the pain away,” Zavery said. “Especially with open source technologies, software is changing at such a fast pace. We do that whole matrix of combinations, and we keep up with the changes as they come along.”

Oracle also hopes to make a difference with its news SLAs. Automated services will have 99.995 percent availability, resulting in less than 2.5 minutes of downtime per month including planned maintenance. This is an industry standard. Today, most cloud companies have SLAs around availability. But this SLA is limiting, Oracle contends. An application may technically still be running, but if performance is so bad as to make it unusable, then that app as still pretty much useless for the end-user, Zavery explained. This can happen in cloud environments when other customers are hogging the bandwidth or processor with their own applications.

“Whatever you are doing on-prem, we should be able to match that in the cloud,” Zavery said. In addition to providing SLAs for availability, the company has also added SLAs for performance and for manageability.  The company claims that it will deliver more than 90 percent of published performance every day in a given month. If the performance level falls below that for more than 44 minutes per month then users may claim service credits.

Wercker, which has been acquired by Oracle, is a sponsor of The New Stack.

Joab Jackson is Editor-in-Chief for The New Stack, assuring that the TNS website gets a fresh batch of cloud native news, tutorials and perspectives each day. He has logged over 25 years in infrastructure IT journalism, including stints at IDG,...
Read more from Joab Jackson
Share this story
RELATED STORIES
VMs Out, Containers In: The Telecom Revolution Continues When Wasm and Docker Work (and Do Not Work) Together ARMO: Misconfiguration Is Number 1 Kubernetes Security Risk Can You Live without Kubernetes? Portainer: How to add a Kubernetes Environment
Share this story
RELATED STORIES
Can You Live without Kubernetes? Acorn from the Eyes of a Docker Compose User How to Deploy GitLab Server Using Docker and Ubuntu Server 22.04 Portainer: How to add a Kubernetes Environment Acorn, a Lightweight, Portable PaaS for Kubernetes
THE NEW STACK UPDATE A newsletter digest of the week’s most important stories & analyses.
We don't sell or share your email. By continuing, you agree to our Terms of Use and Privacy Policy.
TNS owner Insight Partners is an investor in: Docker.