OSCON 2016: How Capital One Is Going Open Source 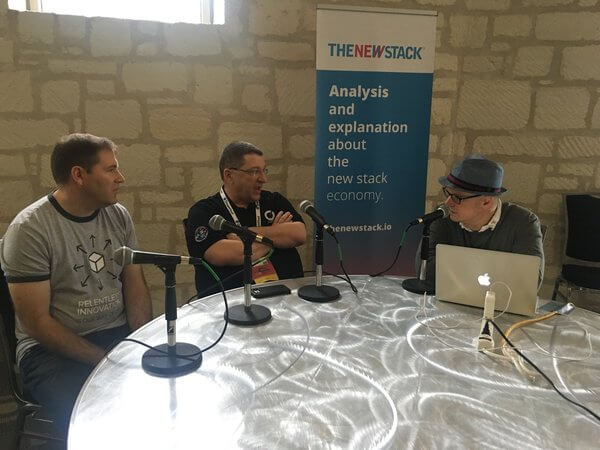 When you think of banking technology, your first thoughts are likely not those of open source software and developer communities, but rather highly restricted proprietary technology held close to the chest. While that may have been the case in the past, companies like Capital One have started to recognize the advantages of open source and begun the hefty process of changing course. Much like a cruise liner, it takes a concerted effort to change the practices and culture of an enterprise steeped in decades of proprietary technology.

In this episode of The New Stack Makers podcast, The New Stack founder Alex Williams speaks with Mark Donovan, senior director of enterprise architecture at Capital One, and the newly appointed Jared Smith, who is in charge of open source community outreach at Capital One, about the company’s foray into taking 30 years of proprietary technology and making the leap into open source. The interview was held at the OSCON open source conference, taking place this week in Austin. Listen to the interview on SoundCloud here:

OSCON 2016: How Capital One Is Going Open Source

Mark Donovan, who has been with Capital One for over a decade now, is leading up the charge, with four teams of developers and Jared Smith at his side, to make sure the company is taking the right steps to properly adopt open source practices and methodology and not simply offering lip service to a movement that doesn’t take such things lightly.

Smith describes his newly formed role as involving “making sure that Capital One is really plugged into the open source communities as well as making sure we’re doing the right thing as we launch open source projects. We’re really trying to build a community around these projects that we launch – in the true open source fashion – not just throwing code over a wall and saying ‘Well, it’s open source’ and then wandering off. We want to do the right things by open source.”

For Donovan, who’s seen the company deal with more than 30 separate applications to address payment and imaging solutions, the move is a welcome change, with some surprising benefits. Donovan says that he might just have the best job there, as he simply has to get out of the way and recognize the contributions of both his team and the community.

“What motivates technologists is the ability to master new tools, autonomy, and [being given] a mission,” Donovan said. “From my experience, if I can provide those three things, great things can happen and people will blow your socks off. There’s been a couple of times where we’ve been able to step back and allow that to happen and I’ve been fascinated to see the increase in productivity that occurs as a result of it. It’s an interesting thing as a manager because it’s not what you’re trained to do.”

While the project itself has yet to be named — that’s still a big endeavor involving branding research and more — the company has already started the wheels spinning with a Github repository and the Capital One Dev Exchange, which provides forums, tools, and information about its APIs.

CapitalOne is a sponsor of The New Stack.