Our Approach to Config-as-Code at Octopus Deploy 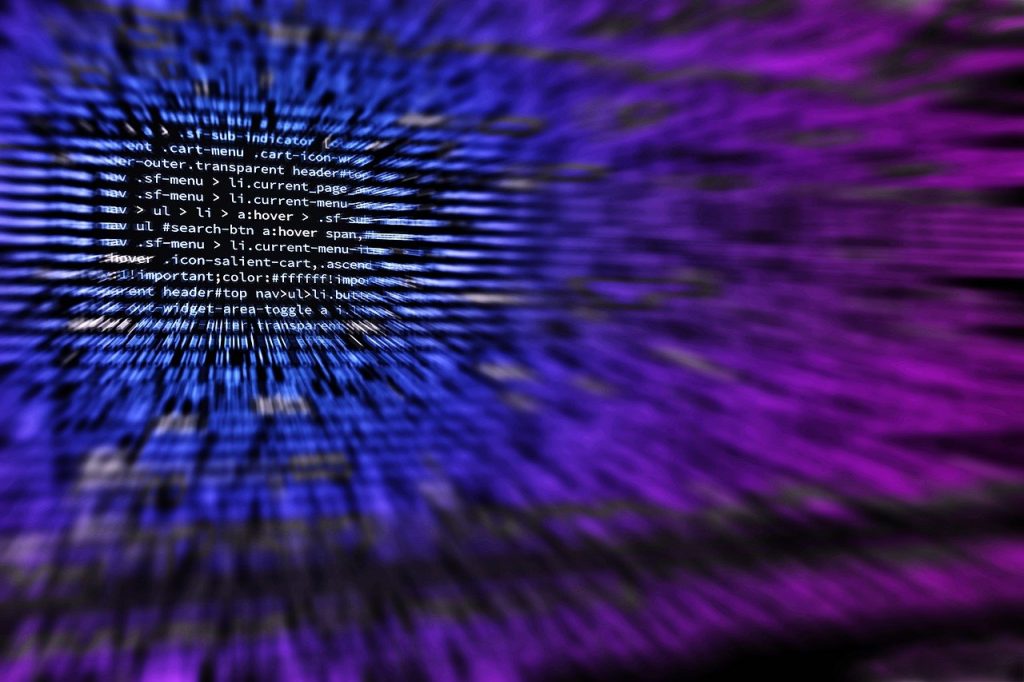 Octopus Deploy’s customers have been asking for a configuration-as-code (CaC) solution for a long time, and after a two-year development period, we released it in March. 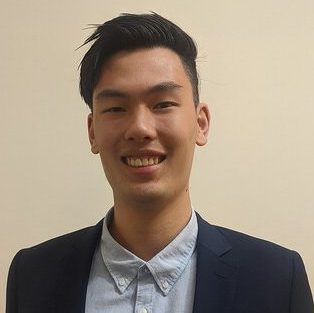 Terence Wong
Terence Wong is a software engineer who loves problem-solving and technology. Terence enjoys understanding new technologies and communicating complex information to different audiences. As a technical content creator at Octopus, Terence works with DevOps and cloud technologies to understand and write about the problems that customers face.

Although it is one of our most requested features, it took longer than expected to implement, but we learned some valuable lessons along the way, and we’re really proud of this key feature.

CaC captures configuration settings in a source-controlled environment such as Git, making it possible to test configuration changes in branches and approve the changes through pull requests.

Developing a configuration-as-code feature for a deployment tool like Octopus Deploy makes sense. Our customers wanted it, we wanted to use it internally, but it’s a feature that cuts across all layers of the application and couldn’t be simply “bolted-on.”

We believe we’ve developed an industry-leading CaC implementation that many organizations can learn from. In this post. I’ll share our development process, the design decisions we made, the benefits of our CaC feature, our release process and our CaC philosophy.

Founded in 2012, Octopus Deploy helps DevOps teams at over 25,000 companies accelerate reliable, repeatable, and traceable deployments across clouds and on-prem infrastructure. Octopus also integrates with hundreds of technologies, including Azure, AWS, GCP, and Kubernetes. Octopus Deploy and TNS are under common control.
Read the latest from Octopus Deploy

Why Did We Implement CaC?

Two years ago, it was clear from customer feedback that CaC was the next logical step for our platform, but looking at CaC implementations from other vendors, we wanted to do it differently and better.

Our customers also told us that CaC is usually a step back from a usability standpoint. When CaC is turned on, users drown in YAML, and there are often several compromises in the UI to accommodate CaC features. Despite the compromises, customers put up with them because there’s no alternative and there are clear benefits to having CaC functionality. We wanted to build a CaC implementation that has all the CaC benefits but none of the usability compromises that follows.

Our CaC journey started as a throwaway proof of concept built in six weeks. It was our first time building a major throwaway feature. In this phase, there were a lot of unknowns, and we tested and validated many assumptions.

A source-controlled implementation has the concept of branches, and we needed to experiment with how this would work in Octopus.

After validating the proof of concept, we built CaC for real for a year. At the end of the year, the engineering team had learned many lessons and wanted to change some fundamental design choices before shipping. These lessons required development to move one step back before we could take two steps forward. For example, our team wrapped the initial CaC implementation around the command line, but performance issues meant we had to swap this out for the LibGit2Sharp library.

The tension between having a shippable product now and knowing we could do better led to an additional year of development before a general release. We chose to release a version that we were thrilled with, not one that was just good enough for a deadline.

When we look back on the two-year journey and the trade-offs we accepted, we believe the result was well worth it!

When using existing CaC vendor solutions, users must choose between a UI or a CaC implementation. We didn’t want our users to have to choose. We wanted to harness the power of CaC but maintain all of our UI functionality.

We found that Git CaC implementations fall on two sides of a spectrum:

On one side, users use Git as a sync mechanism, where users only use Git as a database. This approach is not ideal as the true power of Git is not being used.

On the other side is a Git-native implementation with branching and pull requests but no UI. In this case, users drown in excessive YAML and have no easy way to make simple changes without being knee-deep in code.

We wanted to provide a fully-featured UI experience with Git-native powers so users can use the UI to make minor changes or dive deep into the configuration language in Git and make changes there. We chose to use Git concepts such as branches and pull requests rather than abstract those concepts into Octopus-specific terms. Using Git terms allows new users to understand the CaC concepts we are exposing without needing to be an Octopus expert.

Our configuration language had to be easy to read, write and edit complex documents. We knew that YAML, XML and JSON were strong candidates based on their widespread use in other tools.

JSON was the easiest to implement, but it’s suitable for serialized objects, not documents.

YAML is readable, but it can be tricky to edit. YAML is also better for trivial documents and becomes harder to use with complex documents.

XML was too verbose compared to the other languages.

Hashicorp Configuration Language (HCL) was a human-readable language but also suitable for editing.

Based on the direction HCL was going in future releases, we decided to create our HCL-based language called Octopus Configuration Language (OCL), which is entirely independent of HCL. We’ve built our own parser/serializer, and there’s no obligation on us to follow any direction Hashicorp takes HCL and nothing preventing us from making changes.

In truth, any of these language choices could have worked as they are popular in the industry. We went with what we felt worked best for us.

Work in the UI or Code

As I mentioned earlier, CaC in Octopus Deploy allows users to evolve their Octopus configuration alongside their application code. Here are some of the benefits that we believe our CaC implementation provides:

Branches as a Core Concept

Octopus Deploy fully exposes the power of Git branches, and you can: 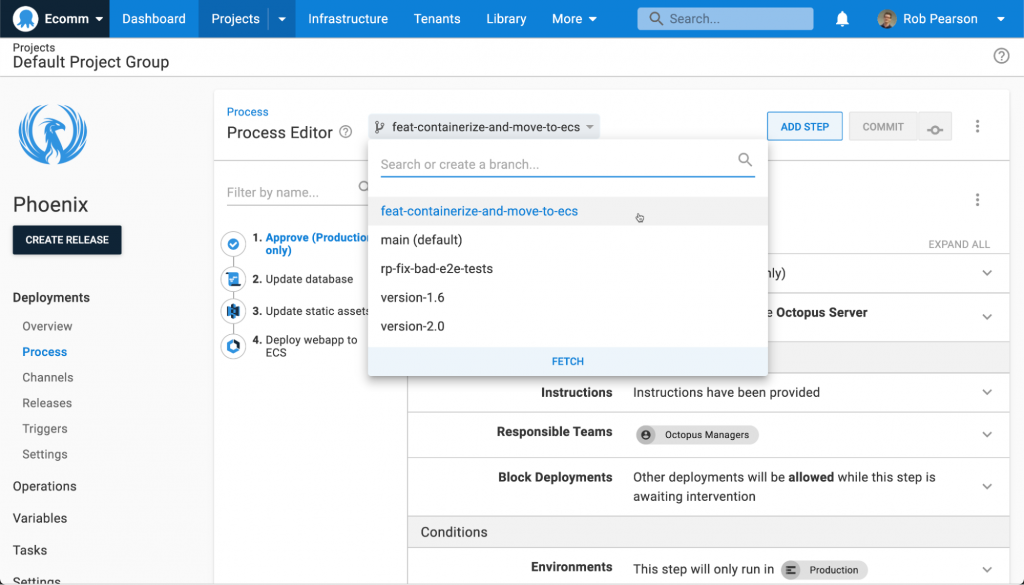 Users can roll configuration back to previous settings, and users can view an entire audit history. The commit history improves the traceability of changes to a deployment process. Users know what changed, when, by whom and, most importantly, why. Users don’t have to search through audit logs to determine why their configuration changed. Git history and diffs provide clear traceability, telling the complete story. Octopus even records the committer details in the Git history. 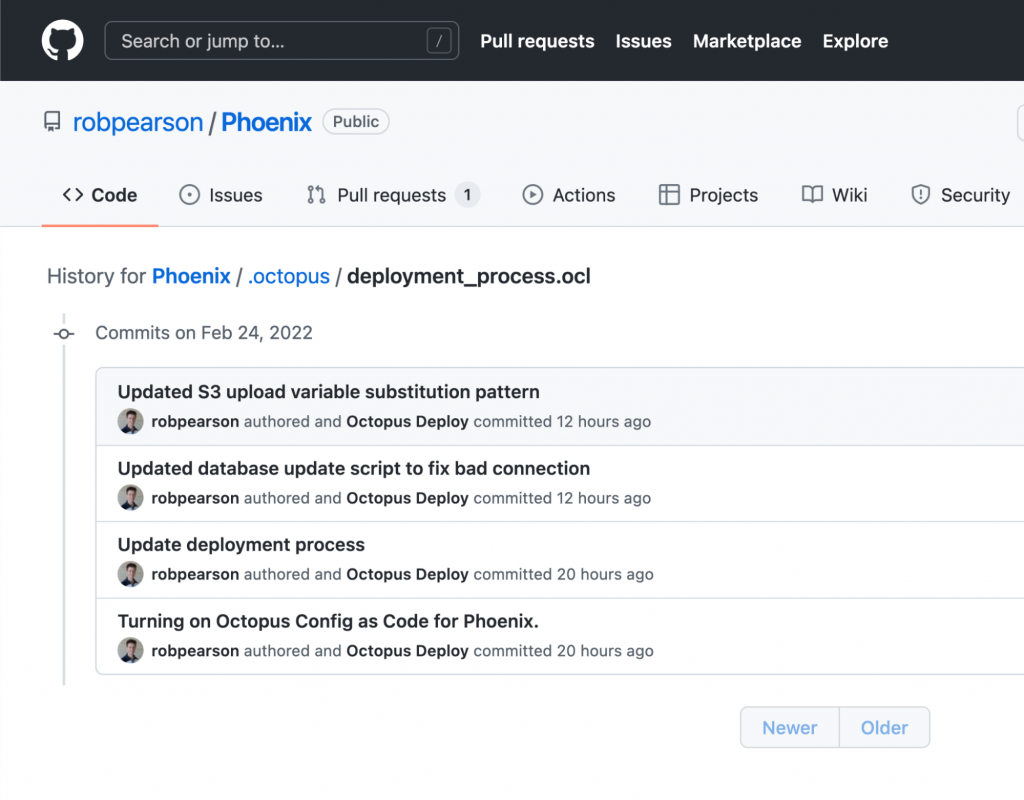 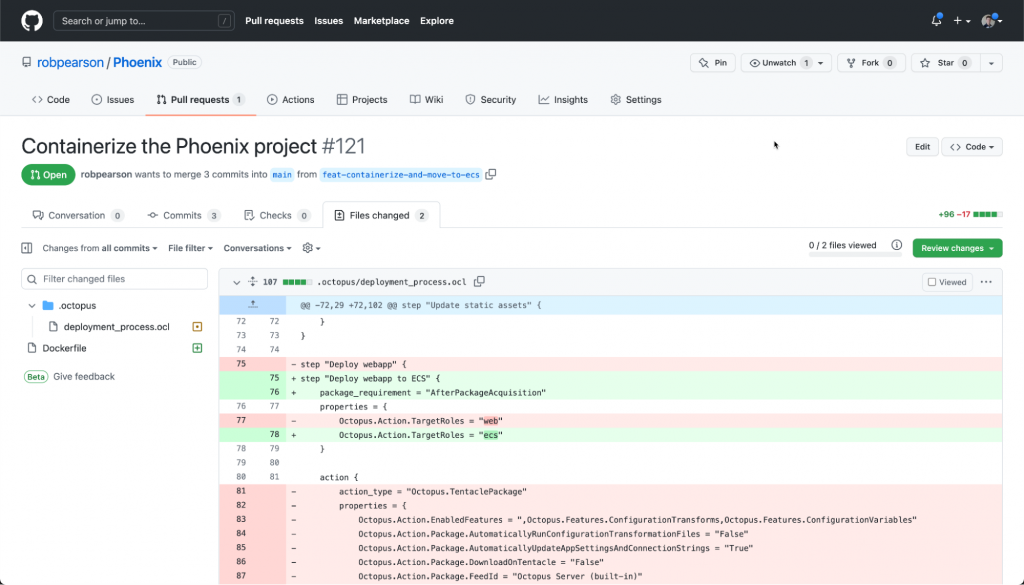 The Octopus UI has a text editor to make changes to configuration code, which can be easier than making changes directly to the code in Git. To make working with OCL easier, we built an extension for Visual Studio Code to complement the Octopus UI. 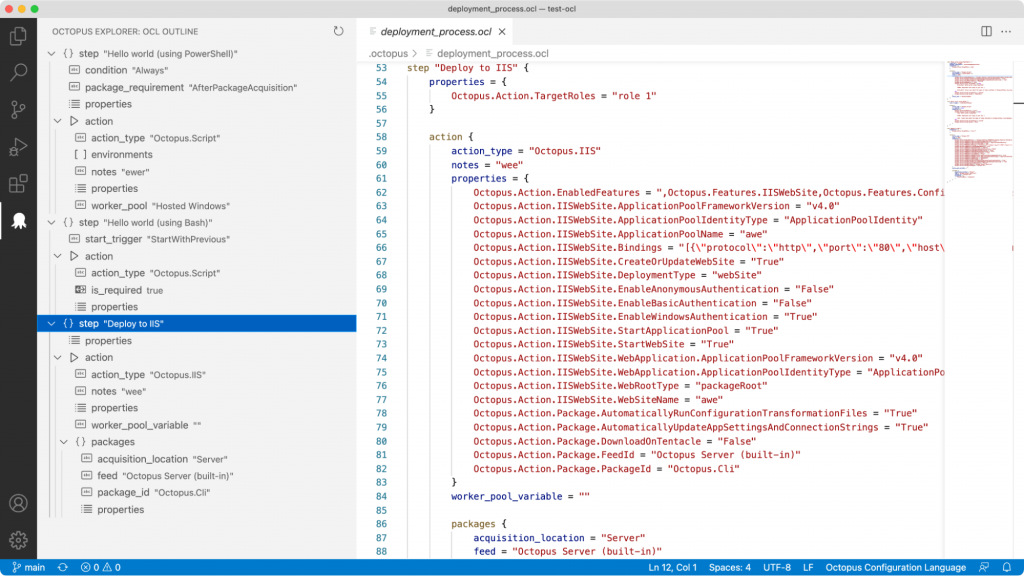 In line with maintaining Git concepts, we replaced the “Save” button with the “Commit” button in the Octopus UI. In a release scenario, there are two types of commits:

Octopus caters to both scenarios and allows users to accept a default commit message or provide their own.

We released an early access preview to allow users to provide feedback that would inform the general release.

Config as code is now available for deployments, but it also makes sense to provide CaC for variables and runbooks, and this is something we’re working on. We shared a public roadmap to inform users of upcoming work and planned features.

Our Configuration as Code Philosophy

Configuration as code sounded great from a customer and developer perspective. Our customers would get to use it, we’d get to build and use it internally, and everyone wins!

The natural extension of this is to have everything as code (EaC) eventually. Every aspect of the deployment process could be as code, but the added value for concepts like environments and tenants could be low. There’s also concerns about secrets to be as code as they shouldn’t be stored in version control. Once deployments, runbooks and variables are as code in Octopus, there are diminishing returns for progressing to an EaC system compared to other features we could develop.

As CaC at Octopus matures, it will naturally intersect with infrastructure as code (IaC), and the team is preparing for this intersection.

The big question to answer is what part of the DevOps pipeline is throwaway?

Do we need to abstract every aspect of the pipeline in a version-controlled system, or are some parts of the pipeline better suited to traditional storage methods? The team will continue to tackle these problems and more as we move forward with CaC in Octopus.

The New Stack is a wholly owned subsidiary of Insight Partners, an investor in the following companies mentioned in this article: Octopus Deploy.