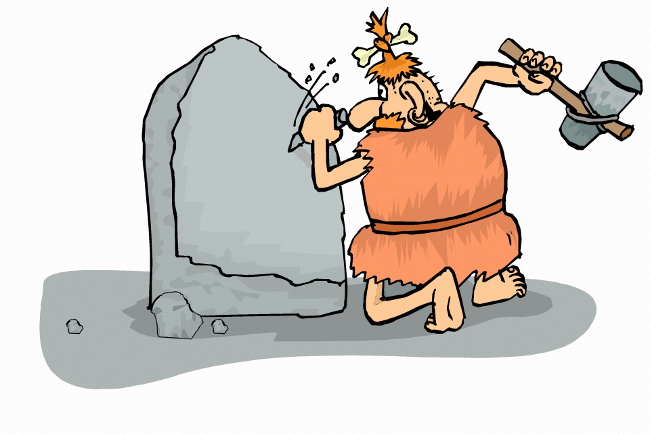 Private cloud is not dead, hybrid cloud is a confusing term, and multi-cloud is real.

In the later half of 2016, we saw several surveys (e.g., from RightScale and InteropITX) that indicated “hybrid” and public cloud adoption were gaining at the expense of “private cloud.” It turns out enterprises are still running workloads in private clouds and will continue to do so. However, private clouds will suffer because many companies are not planning for significant new capital investments to support on-premises infrastructure.

Market confusion about “hybrid cloud’s” definition masks the dynamics of cloud adoption. Most forward-looking observers differentiate between multi-cloud and hybrid. Using a private and public cloud is multi-cloud because the enterprise is using multiple clouds at the same time. We like Carl Lehman and 451 Research‘s definition of hybrid cloud as referring to situations when a single business function is delivered across multiple clouds. Thus, when RightScale reported 67 percent using a hybrid cloud, that should have been called multi-cloud because it was based on respondents that simultaneously replied that they were “using public cloud” and using “private cloud.”

In other studies, we believe the stated preference for “hybrid cloud” actually refers to multi-cloud architectures that allow for cloud bursting or migrating an application to a different cloud to save money.

Only 15 percent of cloud users actually will do “hybrid,” where more than one cloud is used to deliver a specific business function.

An early 2017 survey by 451 Research and Microsoft indicates that only 15 percent expect to primarily use this more robust definition of hybrid cloud. Another 53% plan on using multiple clouds. However, among that group more than half do not expect to even be able to migrate workloads between their clouds.

We also noticed that some of the studies showing large drops in “private cloud” dealt with preferences for future cloud development and not the actual percentage of current workloads being managed. 451 Research and Microsoft have actually provided a gold mine of publicly available reports based on large and global (>1,700 respondents) samples over the last several years.

Using their data, we found that hosted private cloud adoption actually increased from 61 percent in 2016 to 64 percent in 2017. Of course, IaaS usage accelerated more, going from 51 percent to 63 percent. 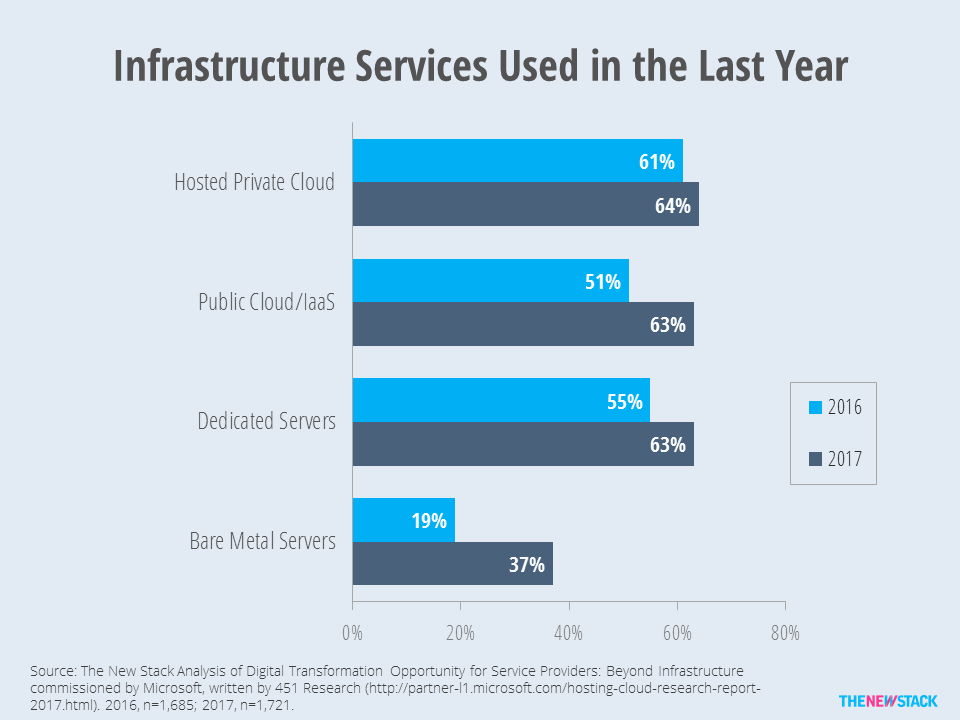 Both dedicated servers and bare metal servers saw large bumps in adoption. Respondents were also asked about their use of basic web hosting, which didn’t change that much. In this context, bare metal is a type of dedicated server running directly on hardware. In general, they are harder to configure but easier to provision quickly.

The aforementioned InteropITX report found that private cloud adoption declined from 2014 to 2016. However, that is based on a question that conflated virtualization with private cloud. In the report, Joe Emison noted, “2016 seemed to mark the last point in time when IT professionals could describe a collection of virtual machines” as doing cloud. That is probably hyperbole. Instead, we have seen a trend where on-premises data centers are described as the private component of hybrid clouds. 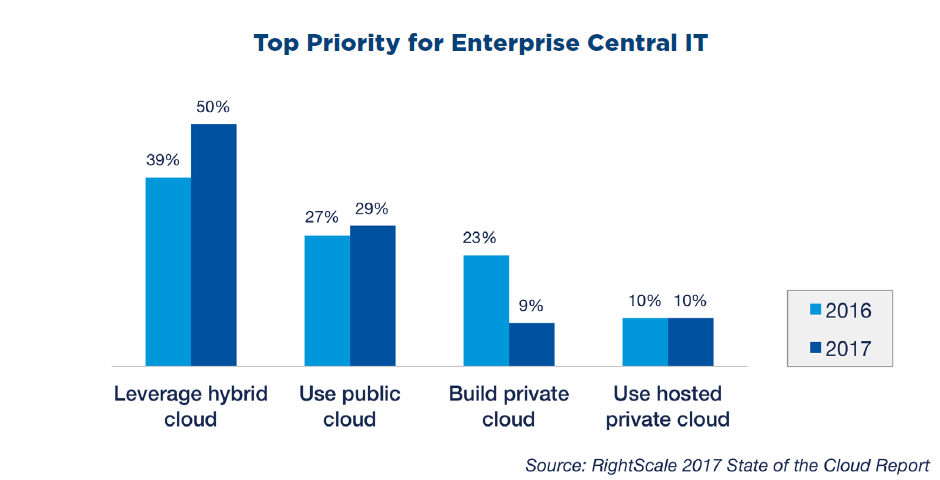 Most organizations are already well on their way to consolidating their infrastructure to virtualized environments and private clouds. Consequently, in the 2017 RightScale survey, the percentage of enterprise IT respondents focusing on building (new) private clouds dropped from 23 to 9 percent since the 2016 survey, while those leveraging their private clouds in conjunction with public clouds rose from 39 to 50 percent.