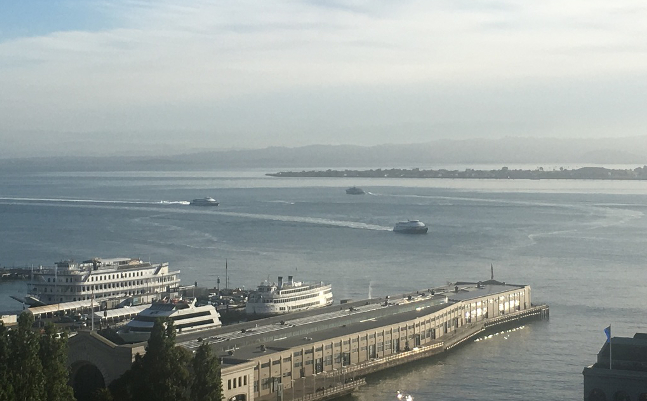 Container orchestration tools, such as Kubernetes and Docker Swarm, are starting to be deployed in production as almost much as containers themselves, suggests a recent research paper from 451 Research, undertaken on behalf of CoreOS.

While the paper’s top level conclusions are consistent with other industry surveys, digging deeper into the data provokes new questions, as is often the case. The future of containers continues to be bright, though the specific direction for container orchestration and hybrid clouds is more of a mixed bag.

CoreOS presented the results of the survey at the company’s CoreOS Fest user conference, taking place this week in San Francisco.

Compared to the white papers published by many vendors, we truly value this report’s reliance on primary research. The research is primarily based on a Spring 2017 survey of 201 IT decision-makers that say their enterprises use containers. Of this group, 52 percent are using containers in production. It is very important to say the CoreOS/451 report does accurately depict actual container adoption levels, even if it stands in contrast with 451’s own 2017 “Voice of the Enterprise” survey of 300 enterprise-level respondents. Published earlier this year, that survey found only 27 percent were using containers in production — almost half the level seen in this new paper.

But the 52 percent container adoption figure is close to the 56 percent adoption rate in The New Stack’s container orchestration survey in Spring 2016. true, both surveys suffer from bias based on participant self-selection, with The New Stack (TNS) respondents more likely to be early adopters and 451 respondents leaning towards senior executives.

That being said, it is interesting to note that 79 percent of respondents of 451 respondents are using container orchestration software. About 52 percent in production and 17 percent are using them in trials or used for test/development. 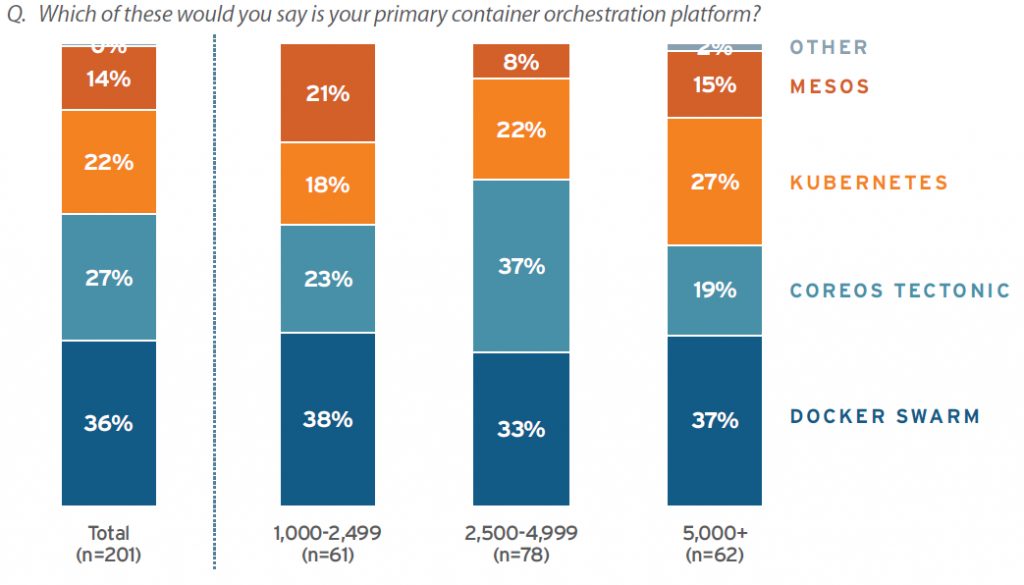 Here are three possible explanations for the high level of container orchestration:

This survey does not provide additional clarity on which container orchestration tools are being adopted. Although it found that almost 75 percent are using Kubernetes, many of those people are also using Mesos, Swarm and other tools. Furthermore, that 75 percent that said they use Kubernetes would mean that basically everyone that uses a container orchestration tool has Kubernetes installed.

While we know Kubernetes is the favored tool, that figure is too high. When asked what is their primary orchestration platform, Docker Swarm was the cited more often than Kubernetes (36 percent vs. 22 percent).

Adding to the confusion, CoreOS Tectonic — a commercial Kubernetes distribution — was cited by 27 percent. If we add the CoreOS figure to other Kubernetes responses, that equals 57 percent, which mirrors the preference levels seen in other surveys conducted throughout the last year.

Does this mean CoreOS controls half of the Kubernetes market? Probably not. We have to ask, but perhaps the company provided its customer list to 451 for the survey. Other platforms based on Kubernetes, like Red Hat’s OpenShift were not asked about. (Editor’s Note: Jay Lyman of 451 confirms that the survey sample came from an independent group and was in no way influenced by CoreOS.)

Feature image by Alex Williams, taken at the CoreOS Fest.

Lawrence has generated actionable insights and reports about enterprise IT B2B markets and technology policy issues for almost 25 years. He regularly works with clients to develop and analyze studies about open source ecosystems. In addition to his consulting work,...
Read more from Lawrence E Hecht
SHARE THIS STORY
RELATED STORIES
3 Container Practices to Boost Your Security Posture 4 Ways to Use Kernel Security Features for Process Monitoring Can Observability Platforms Prevail over Legacy APM? The Next Evolution of Virtualization Infrastructure Application Storage Is Complex. Can Automation Simplify It?
TNS owner Insight Partners is an investor in: The New Stack, Docker.
SHARE THIS STORY
RELATED STORIES
The Next Evolution of Virtualization Infrastructure 3 Container Practices to Boost Your Security Posture Docker versus Kubernetes: Start Here Install Dozzle, a Simple Log File Viewer for Docker Top 5 Considerations for Better Security in Your CI/CD Pipeline
THE NEW STACK UPDATE A newsletter digest of the week’s most important stories & analyses.
The New stack does not sell your information or share it with unaffiliated third parties. By continuing, you agree to our Terms of Use and Privacy Policy.