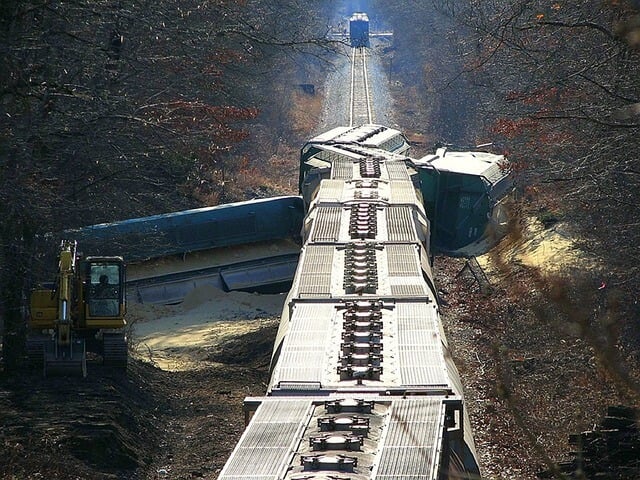 I’m busy looking through a microscope, profiling what production container users, their orchestration tools and the size of their deployments. In my excitement, I realized that adoption of containers might have stalled.

In February 2016, we reported on several surveys showing that adoption of containers had increased, and we speculated that production use would increase. That is still true, but it appears that many organizations are in a holding pattern, waiting to adopt containers to see how the first wave of production container use works out.

If the “later majority” only needs to hear good reviews based on production use, then perhaps the percentage of companies using containers will increase soon. In reality, we believe that the number of large scale deployments integrated into a modern develop/deploy pipeline are approaching that tipping point, but not there yet. 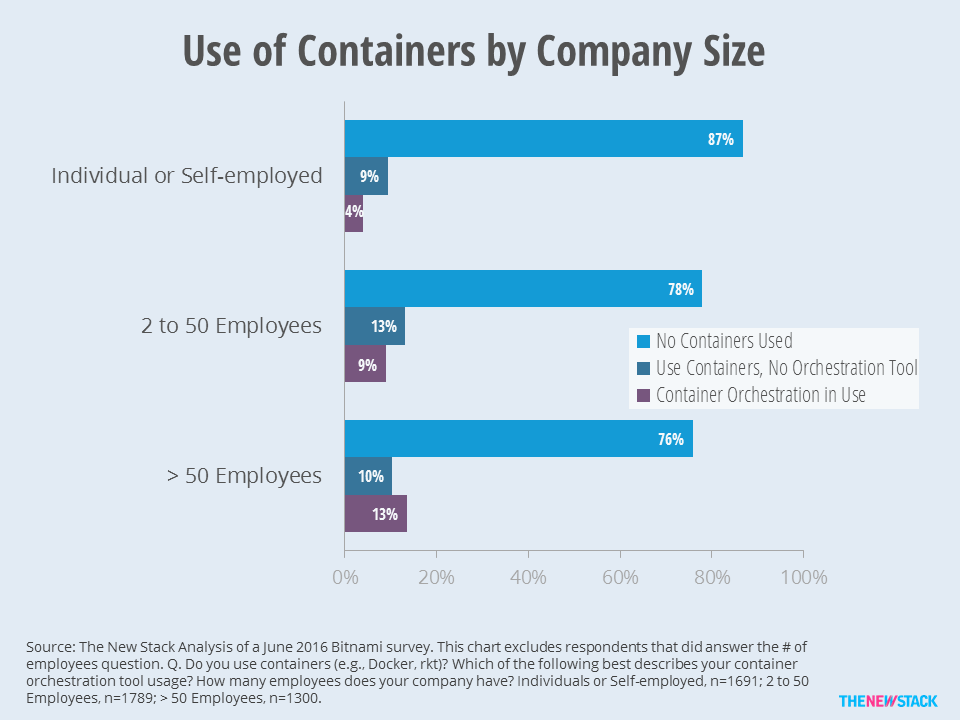 Bitnami survey shows 24 percent of larger enterprises have adopted containers. Of the companies using containers, about half use an orchestration tool.

But looking only at surveys of enterprises IT professionals panels (as opposed to self-selected samples that include self-employed consultants), usage levels have barely budged over the last six to nine months.

Instead of a large uptake in new container users, the “action” is in converting small implementations into larger ones.

So, even if we exclude all trial projects from the comparison, that’s stagnation. Enter a new survey we recently evaluated from Bitnami, which was sent to the company’s mailing list. Just looking at the 1,300 respondents from companies with more than 50 employees, we found that use was a “whopping” 24 percent. The rest of this article provides more insights from the Bitnami study.

Instead of a large uptake in new container users, the “action” is in converting small implementations into larger ones. As the number of nodes or machines managing containers in production increases, so does the need for container orchestration tools. The chart below indicates that even among production users of containers, over a quarter rely on manual ways to manage containers. Kubernetes and HashiCorp were the tools that saw the largest uptick in use as deployment scales increase. 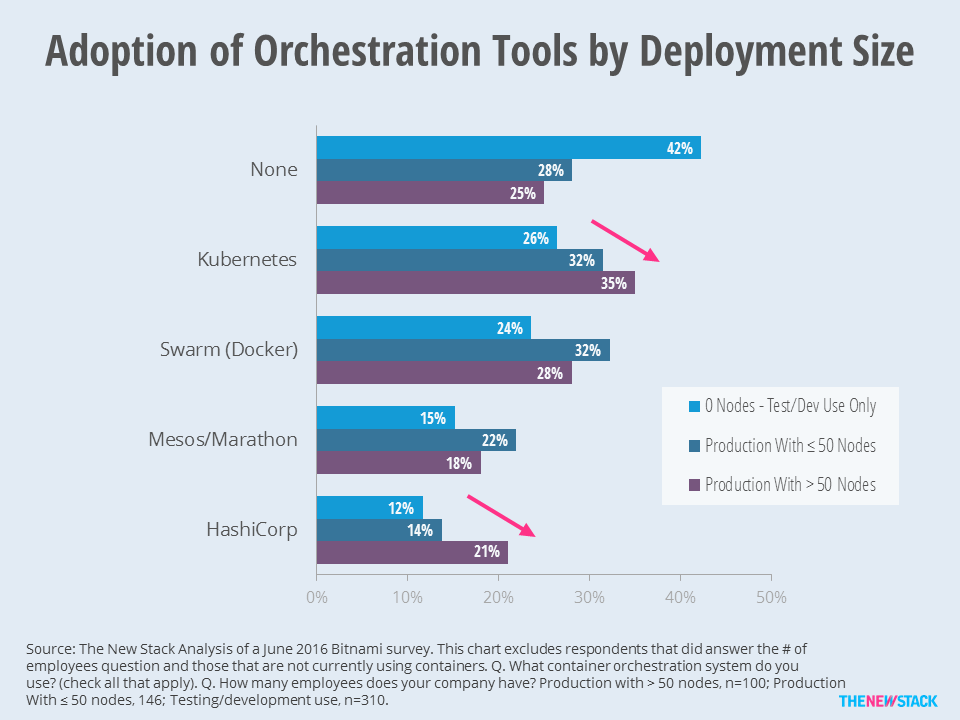 Kubernetes does well among large enterprises as well as deployments with many machines running containers. In fact, as the size of a company increases so does the likelihood that they use an orchestration tool. That being said, so far, 49 percent of respondents from enterprises with more than 50 employees said they use containers but do not use an orchestration tool. 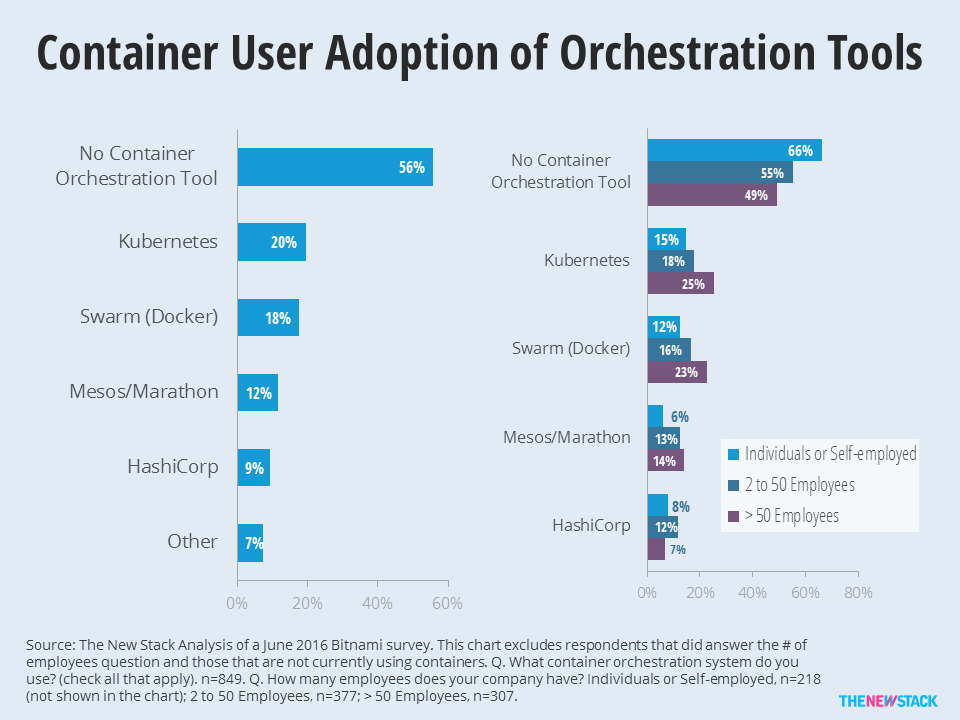 Larger companies are more likely to use Kubernetes, Docker and Mesos/Marathon for orchestration.

Deployment size and company size are only part of the equation. Larger enterprises have their unique set of needs. Vipin Chamakkala does a good job describing some of these needs in his Workbench blog. While the charts in this article back up his analysis, I believe he does non-Kubernetes offerings a disservice by not including their full-stack competitive offering.

Enterprises with their multi-person development teams are also more likely to be using a continuous integration system. Only 8 percent of 50+ employee companies are using both containers and continuous integration (CI). For even more perspective, only four percent of respondents said their company is using both containers and a CI system of any kind.

Until more companies are using these technologies hand-in-hand, we don’t expect the full benefits of the DevOps and microservices trends to take hold. And until then, we will continue to look at the size of container deployments and how they are being managed. 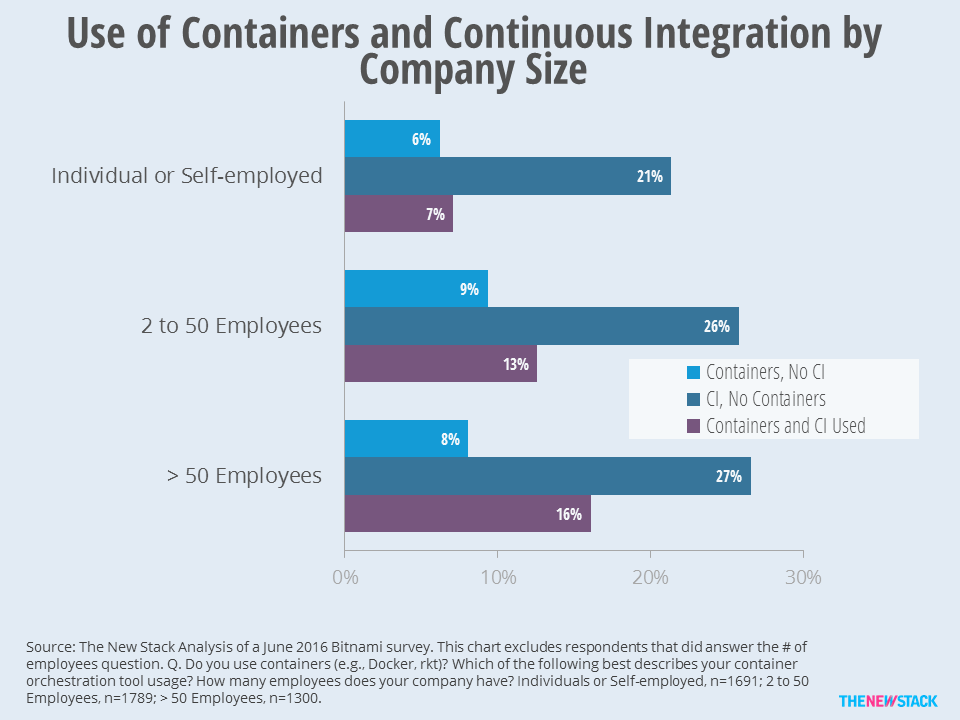 We’ll be writing more about the Bitnami survey and CI data in the coming weeks. In the meantime, please read Fintan Ryan’s analysis of the survey, as well as his take on container adoption using New Relic data. Also, we look forward to seeing Datadog continue profiling container adoption based on a company’s number of hosts.

Bitnami, Cloud Foundry and New Relic are sponsors of The New Stack.

Lawrence has generated actionable insights and reports about enterprise IT B2B markets and technology policy issues for almost 25 years. He regularly works with clients to develop and analyze studies about open source ecosystems. In addition to his consulting work,...
Read more from Lawrence E Hecht
SHARE THIS STORY
RELATED STORIES
Data, Analytics and AI: What Will Happen in 2023 Choosing the Right Container Native Storage for AWS Public Cloud What LaunchDarkly Learned from 'Eating Its Own Dog Food' MicroK8s and Portainer Is The Easiest Way to Deploy an Application on Kubernetes I Need to Talk to You about Kubernetes GitOps
TNS owner Insight Partners is an investor in: The New Stack, Docker.
SHARE THIS STORY
RELATED STORIES
What Trouble Awaits Cloud Native Security in 2023? The Top 4 Threats to Securing Your Cloud Infrastructure Platform Engineering Won’t Kill the DevOps Star Kubernetes App Deployment from the Command Line What Is the Docker .env File and How Do You Use It?
THE NEW STACK UPDATE A newsletter digest of the week’s most important stories & analyses.
The New stack does not sell your information or share it with unaffiliated third parties. By continuing, you agree to our Terms of Use and Privacy Policy.