Parity Check: The Software Budget’s Appetite Kept in Check by the Bottom Line 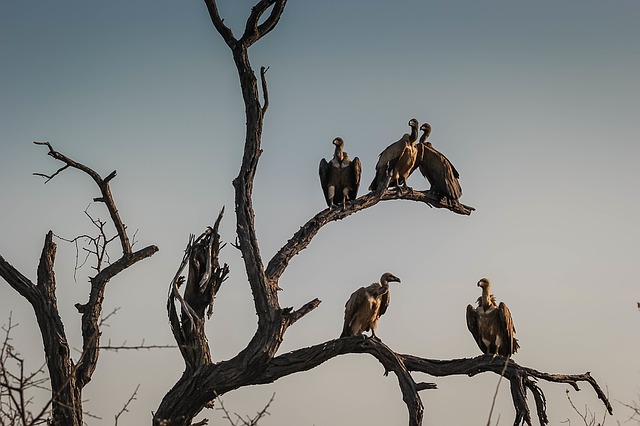 Don’t be fooled by reports of huge spending increases on as-a-service software. Five years after Marc Andreessen famously declared that software is eating the world, the reality paints a more nuanced picture.

While spending on applications has recently increased, CIOs are focused on constraining it. Despite the increasing importance of “digital transformation,” enterprises are not hiring a disproportionate number of developers. Instead, software development and maintenance are now a part of many IT job roles and categories.

The 2017 SIM IT Trends Study should raise a red flag for anyone expecting the software gravy train to continue indefinitely. The report surveyed 1213 members of the Society for Information Management’s members, all of which were senior IT leaders and 490 were CIOs. Since 2012, application/software development/maintenance has risen in its relative position in IT budgets and the respondents citing it as one of the largest areas of IT investment rose from 29 percent in 2015 to 34 percent.

However, only 14 percent believe applications should get more investment. While CIOs plan to continue investing in analytics/data, security and cloud services, spending on software is feeling a pinch. 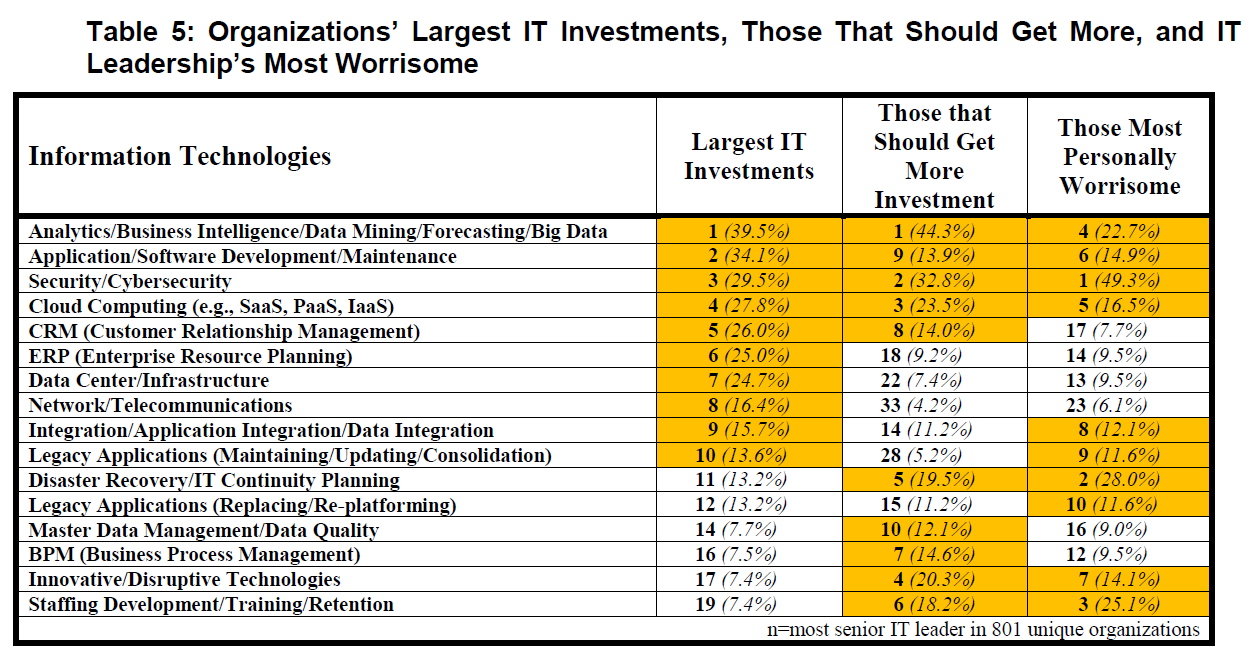 Few IT leaders want to continue investing in applications and software development. Not seen in the table is that ERP as a large investment dropped from 32 percent in 2015 to 25 percent in 2016. Source: 2017 SIM IT Trends Study.

Last year, IT leaders were particularly concerned with software spending as they thought it was going to continue rising to 18.6 percent of the IT budget. Perhaps because of spending control, that growth did not materialize. Instead, software dropped from 17.9 percent to 15.4 percent of IT budgets. Instead of software eating the world, what we are seeing is significant decrease in hardware spending from 15.8 percent in 2015 to 12 percent in 2016, with cloud services (e.g., SaaS or PaaS) seeing an increase over four percentage points.

The drop in software spending is mostly a result of shifts in how software is delivered. Gartner has noted that although overall application software spending has and will continue to grow slowly, the proportion going to SaaS offerings is increasing. The same phenomenon is expected to occur as infrastructure software is displaced by flavors of PaaS and SaaS.

Another change in the software has been a focus on line of business spending. As we wrote about previously, the problem of shadow IT has faded a bit as IT gains responsibility for software even when the funding comes from a business department. If expenditures for functions such as marketing increases, the software-related costs for IT become related more to integration and support as opposed to licenses.

In order to tell a more complete story, the SIM study also looks at spending based on functionality that cannot be evenly assigned to mutually exclusive budget categories. From this point of view, software development and maintenance saw a spike from 18.1 percent to 24.4 percent of IT budget allocation. That increase in software spending is likely due to consulting work needed to integrate IT purchases, whether they be for hardware, software or services. Looking at spending from this perspective, “keeping the lights on” and offshore IT are taking the biggest hit.

From a different spending perspective, software spending is going up, while “keeping the lights on” and offshore IT are declining. Source: 2017 SIM IT Trends Study.

Calculating how much is being spent on software is a tricky endeavor. In one sense, the term “applications” defines a much larger portion of IT spending because it takes into account the human labor needed to support software as opposed to just looking at the price of software licenses. We have reason to believe the SIM data is reasonably accurate. In comparison, Gartner estimates that software accounts for 10 to 16 percent of 2016 IT spending, depending on if telecom is included. We also looked at data from Apptio, which presents data from 2015 in two different ways. Using finance-related cost terminology, Apptio reported that software was 17 percent of spending. Alternatively, when looking at different IT towers, Apptio sees 37 percent of spending dedicated to building, buying or supporting applications. 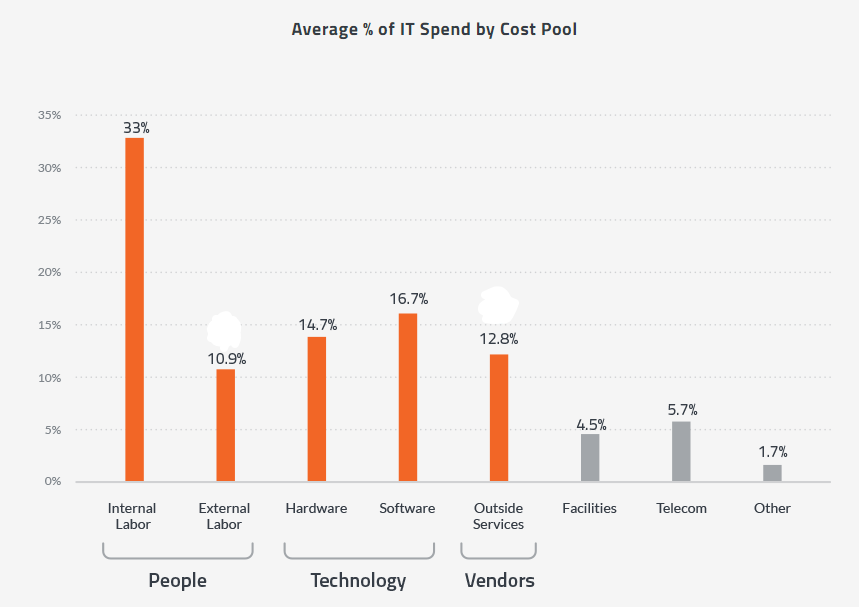 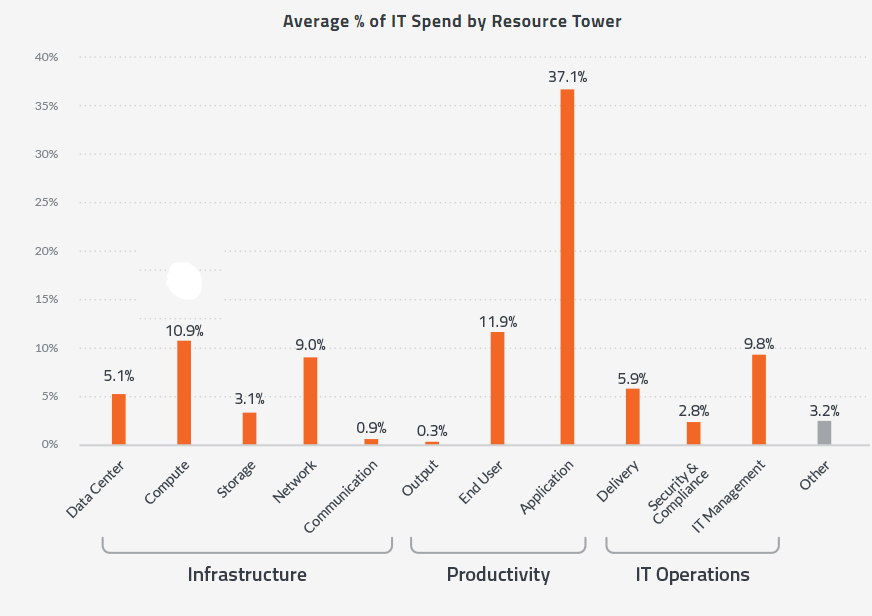 Stats about software and application spending can vary significantly based on how they are defined. Source: Apptio.

Apptio’s cost pool approach provides additional insight. Less than a quarter of application spending is directly on purchasing or renting software. Internal labor represents the biggest block of app spending, with slightly more being allocated to support as compared to actual development. A key takeaway from Apptio’s IT Economics Report Issue 2 is:

The orange circles refer to analysis provided in Apptio’s IT Economics Report Issue 2.

According to Computer Economics, from 2011 to 2015, there was absolutely no change in ratio of application programmers to overall IT staff — the percentage stayed steady at 20 percent. Therefore, any relative increase in software spending is due to rising wages. Labor costs are often seen as impeding software development. Buying software is a way to avoid relying on external labor for custom software but often times internal labor is needed to integrate and support the software.

If you thought that offshoring or other contract arrangement have been helping enterprises address a “developer shortage,” you would be at least partially wrong. HfS Research reports application development and maintenance revenues increased about five percent in 2016, although that growth is “tempered by pricing pressure and some insourcing.” Most of the spending increase is likely on development and not maintenance. In fact, Computer Economics reports the percentage of companies that outsource part of their application maintenance function has dropped from 73 percent in 2011 to 53 percent in 2015.

Cloud computing is eating hardware spending. Software spending as a whole may be on a slight uptick, but in most market activity is really just a rearranging of furniture. The cloud is changing the mechanism in which software is delivered. Money that used to be spent on ERP and legacy software is shifting to emergent vendors. Savings achieved by automating parts of the software development lifecycle are being reinvested in new software projects.

As always, be ever vigilant when you hear that a revolution is changing the way we work. Just because business innovation is being driven by software does not mean that software spending has to increase.

Lawrence has generated actionable insights and reports about enterprise IT B2B markets and technology policy issues for almost 25 years. He regularly works with clients to develop and analyze studies about open source ecosystems. In addition to his consulting work,...
Read more from Lawrence E Hecht
SHARE THIS STORY
RELATED STORIES
Anil Dash on Mastodon Joining Fastly’s Open Source Program Generative AI: How Companies Are Using and Scaling AI Models Netlify Acquires Gatsby, Its Struggling Jamstack Competitor 5 Security Principles to Guide Your DevSecOps Journey Azure Went Dark
SHARE THIS STORY
RELATED STORIES
Crypto Winter Puts Dampener on Web3 Developer Growth Why Trust and Autonomy Matter for Cloud Optimization Boost Customer Engagement with Real-Time Data How New Sony AI Chip Turns Video into Real-Time Retail Data How Platform Engineering Can Improve DevOps Collaboration
THE NEW STACK UPDATE A newsletter digest of the week’s most important stories & analyses.
The New stack does not sell your information or share it with unaffiliated third parties. By continuing, you agree to our Terms of Use and Privacy Policy.