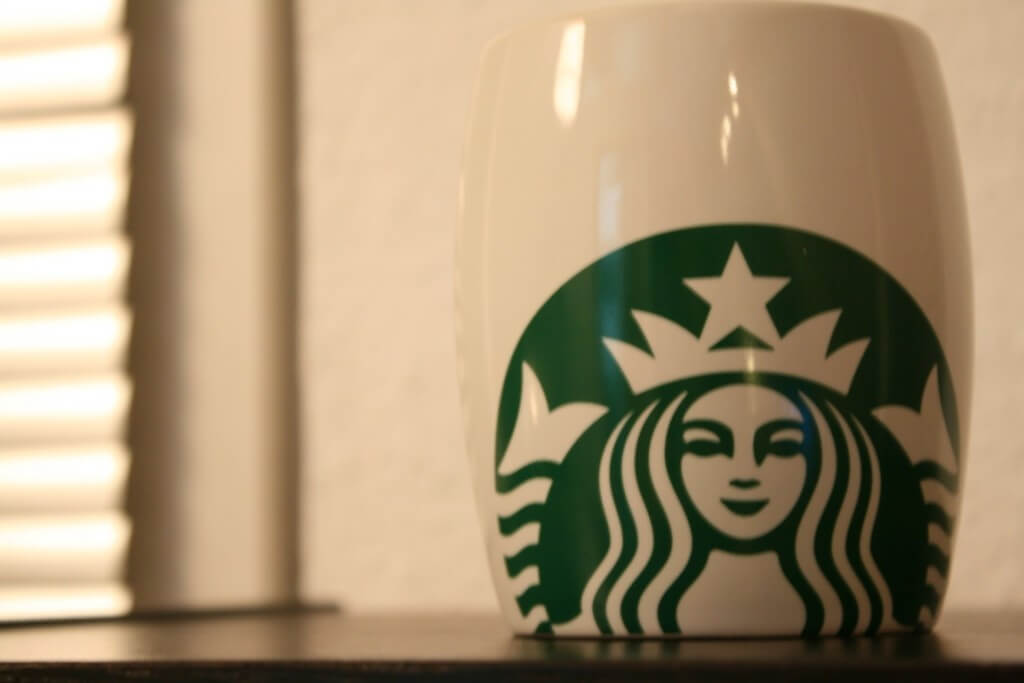 How does The New Stack study compare to the recently published Cloud Foundry and ClusterHQ surveys, regarding what they’ve found in container adoption?

In the Cloud Foundry Foundation‘s report, half the respondents say they orchestrate or will orchestrate containers using platform or containers as a service (PaaS or CaaS). In contrast, the ClusterHQ survey, ours and many other surveys show that orchestration platforms like Kubernetes, Swarm and Mesos are the leading options. Upon review, we found that this and other differences are due to the survey samples and the way questions were worded.

There was still agreement among the studies. Over the last year, surveys have consistently reported an increase in container usage. Also, along with a recent Docker survey, these reports consistently indicate the belief that containers will increase developer efficiency and that users desire tools that both developers and IT operations can use.

The Cloud Foundry survey indicates a much stronger preference to use PaaS as compared to our survey. Combining both the provider- and self-managed PaaS categories, 45 percent of container users or evaluators utilize a PaaS to manage or orchestrate containers. That compares to just the seven percent that said PaaS is the primary method of container orchestration. However, since there are possibly overlapping definitions between PaaS and CaaS, it is relevant to note that the Cloud Foundry survey indicated 21 percent preferred provider-managed container services as compared to 12 percent in The New Stack survey.

The Cloud Foundry results lean towards PaaS and CaaS for several reasons. First, the sample of people asked the question differed significantly. Unlike the ClusterHQ and The New Stack surveys, Cloud Foundry’s participants 1) came from an online panel instead of self-selecting themselves to participate, and 2) only worked at enterprises with more than 100 employees.

The larger companies in the Cloud Foundry survey may be more likely to use a PaaS already — if anyone has hard data about that, please let us know. Web surveys always face self-selection bias, and online panels are a good way to measure market share. That being said, online panels do have limitations such as difficulty finding with domain expertise. For example, based on our conversations with Cloud Foundry employees with access to the full survey’s results, we know that although respondents were screened for the ability to answer the questions, participants were still much less knowledgeable about containers than those that self-selected to participate.

The Cloud Foundry’s results show that, at least for now, there is a preference for bundled solutions among larger enterprises.

The other critical reason for Cloud Foundry’s PaaS/CaaS heavy results is that the respondent’s use of containers was less mature than in the other two surveys. Cloud Foundry respondents were either using or evaluating/deploying containers. Because of the question wording, we believe that many of these respondents are using containers in non-production environments or are still just vaguely planning to use containers.

In contrast, all the ClusterHQ respondents said they were using containers, with three-quarters doing it in production. Similarly, our study’s finding include 64 percent production users, 18 percent non-production users, with the remaining responses coming from those actively conducting trial projects or evaluation.

Although The New Stack survey didn’t delve into the challenges of deploying containers, the other surveys did. Cloud Foundry noted that 50 percent of container users or evaluators said container management was one of their top three challenges. Interestingly, among those using containers, they were much more likely than evaluators to believe they needed a PaaS, particularly one managed by a third-party provider, to effectively manage containers.

It is our belief that many of the respondents are still in the early stages of use and that as they move along, they will be less likely to be concerned about container management because they have started to use tools built to handle container deployments. Whether these tools will be a provider managed PaaS is yet to be determined.

Persistent storage was the biggest concern in the ClusterHQ survey, but that result can be taken with a grain of salt — since the vendor offers solutions to that problem, it is likely that many participants in the survey had already been educated about the issue. 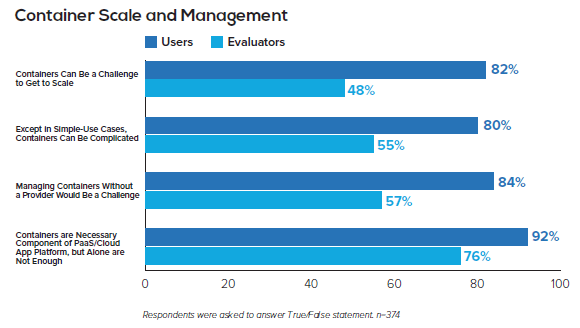 Although all three surveys indicated that Kubernetes, Docker Swarm and Mesos are popular orchestration platforms, there were significant differences as well. The Cloud Foundry survey calls these tools self-managed orchestration tools, and lists CoreOS Tectonic (a commercial enterprise-prepared version of  Kubernetes) as the leading choice. However, we believe that since there were no other options for Kubernetes in the answers available, really wanted to answer “Kubernetes” and didn’t have a preference for the CoreOS flavor.

The other thing that stood out in these results is that HashiCorp’s Nomad came in second place in this niche. Since Nomad just came out a few months ago, we believe many of these answers came from people still evaluating their options. The ClusterHQ data indicates at 18 percent; internally developed tools are the third most used container orchestration tool. This is similar to the 16 percent of The New Stack survey participants that primarily use shell scripts and customizations. We believe that if ClusterHQ had provided a larger list of possible answers, its results would have also shown people picking PaaS and configuration management tools as possible solutions. 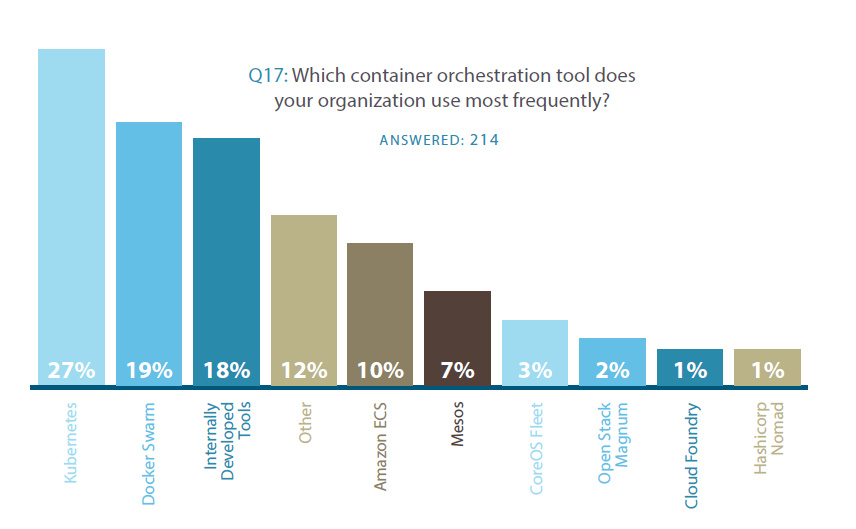 Internally developed tools are the third most used container orchestration tool, according to a ClusterHQ survey.

While they most if not all PaaS solutions have container management capabilities, we are not sure if the rest of the market would consider this to be accurate. In fact, in our research, we are seeing a preference for CaaS and other container services being offered in conjunction with both IaaS, CaaS, and private cloud offerings. It will be interesting to see how the competition plays out as container management responsibilities move at least partially out of application developers’ hands.

We talked to the consulting firm ClearPath Strategies in an early stage of the Cloud Foundry’s survey development. Although we weren’t involved in its methodology decisions, we thought its method of screening users based on information and attention level was particularly clever. So, they rejected the data from respondents if they:

CoreOS, Cloud Foundry and Docker are sponsors of The New Stack.

Lawrence has generated actionable insights and reports about enterprise IT B2B markets and technology policy issues for almost 25 years. He regularly works with clients to develop and analyze studies about open source ecosystems. In addition to his consulting work,...
Read more from Lawrence E Hecht
SHARE THIS STORY
RELATED STORIES
What Is the Docker .env File and How Do You Use It? Docker versus Kubernetes: Start Here Data, Analytics and AI: What Will Happen in 2023 WebAssembly Needs Schedulers, and Kubernetes Doesn't Quite Fit the Bill Can Observability Platforms Prevail over Legacy APM?
TNS owner Insight Partners is an investor in: The New Stack, Docker.
SHARE THIS STORY
RELATED STORIES
How to Implement a Security Scanner for Docker Images The Next Evolution of Virtualization Infrastructure How to Deploy Containers with nerdctl .NET 7 Simplifies Route from Code to Cloud for Developers What Is the Docker .env File and How Do You Use It?
THE NEW STACK UPDATE A newsletter digest of the week’s most important stories & analyses.
The New stack does not sell your information or share it with unaffiliated third parties. By continuing, you agree to our Terms of Use and Privacy Policy.