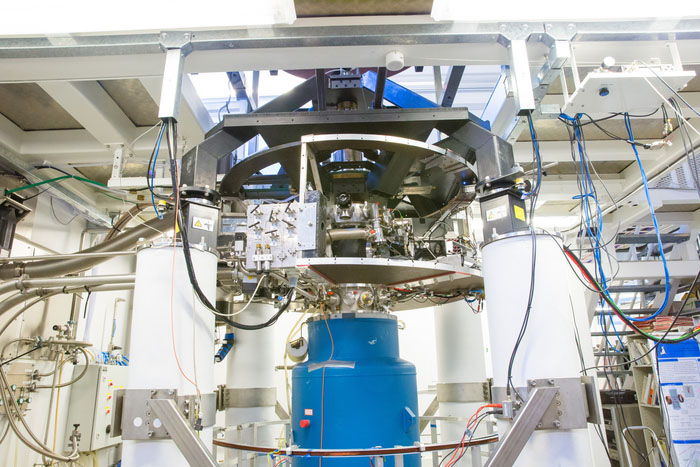 The mythical Perpetual motion machine — or device that run continuously on their own without the need for a source of external power — have been studied and speculated about for centuries, and are a frequent fixture of science fiction works. And while experts generally say it’s not possible to build a true perpetual motion machine, since they break the laws of thermodynamics, that hasn’t stopped some from creating so-called near-perpetual motion machines that mimic some of these characteristics.

But it now seems that at least in the realm of quantum physics, perpetual motion might actually be possible, thanks to a recent study done by an international team of scientists from Lancaster University, Royal Holloway London, Landau Institute, and Aalto University. The researchers’ work, which was published in the journal Nature, reveals how they were able to create what they call a “two-state system” by linking two time crystals.

According to the team, the coupling of two time crystals together could be a major step forward in utilizing them for more pragmatic applications, such as establishing stable quantum computing systems that won’t decohere. This kind of quantum decoherence occurs when the external environment inadvertently interacts with the quantum bits (or qubits) of the system, causing them to change their quantum states, thus losing the information that was stored in the quantum computer.

However, some experts believe that time crystals could help prevent decoherence in these quantum systems. Time crystals, as the name suggests, are similar to the conventional crystals that we know of (like table salt), where their atoms are organized into three-dimensional lattices.

But the main difference with time crystals is that their atomic patterns repeat both in time and space, making them into a new kind of exotic matter on par with supersolids, superfluids and Bose-Einstein condensates.

The atoms of time crystals oscillate cyclically — even in their lowest state of energy or “ground state” — even when then is no energy input going back into the system. Thanks to this natural state of perpetual “ticking”, it creates a kind of perpetual ground state motion that means time crystals could be one way to achieve stability in quantum systems, even if the mechanisms behind them aren’t yet well-understood.

“Everybody knows that perpetual motion machines are impossible,” noted the study’s lead author, Dr. Samuli Autti, in a statement. “However, in quantum physics, perpetual motion is okay as long as we keep our eyes closed. By sneaking through this crack we can make time crystals.”

To create their time crystals, the team first used quasiparticles called magnons. Interestingly, magnons are not particles as we typically understand them, but are actually a collective excitation of the electrons’ spin structure in a crystal lattice, almost like a wave that moves through a field of spins that interact with each other.

These magnons were created when an isotope of helium was cooled to within one ten-thousandth of a degree of absolute zero, creating a zero-viscosity fluid with low pressure that is called a B-phase superfluid. It’s in this medium that the time crystals took shape as Bose-Einstein condensates that each contain over a trillion magnon quasiparticles. Because Bose-Einstein condensates are made from subatomic boson particles that are also cooled down to near-absolute zero, the atomic matter moves extremely slowly — so slowly, in fact, that it becomes a dense cloud of atoms that behaves like one “super atom”.

This density allowed the two time crystals to overlap and exchange magnons, thus affecting their oscillation cycles, and ultimately creating a unified system that can nevertheless operate in different superpositioned quantum states.