In this latest version of The New Stack Makers podcast, we delve more deeply into the emerging practice of platform engineering, with Humanitec's Aeris Stewart, and HashiCorp's Michael Galloway.
Jan 18th, 2023 1:23pm by Heather Joslyn and Joab Jackson 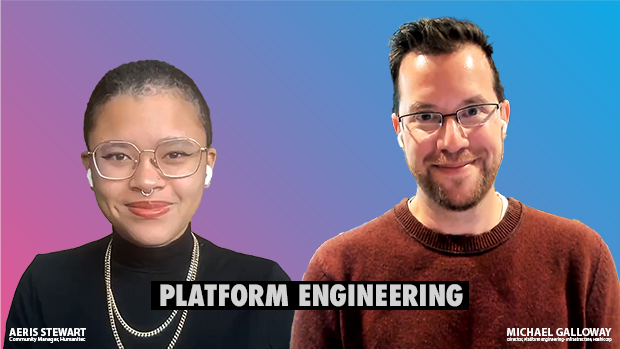 In this latest episode of The New Stack Makers podcast, we delve more deeply into the emerging practice of platform engineering. The guests for this show are Aeris Stewart, community manager at platform orchestration provider Humanitec and Michael Galloway, an engineering leader for infrastructure software provider HashiCorp. TNS Features Editor Heather Joslyn hosted this conversation.

Although the term has been around for several years, platform engineering caught the industry’s attention in a big way last September, when Humanitec published a report that identified how widespread the practice was quickly becoming, citing its use by Nike, Starbucks, GitHub and others.

Right after the report was released, Stewart provided an analysis for TNS arguing that platform engineering solved the many issues that another practice, DevOps, was struggling with. “Developers don’t want to do operations anymore, and that’s a bad sign for DevOps,” Stewart wrote. The post stirred a great deal of conversation around the success of DevOps.

Platform engineering is “a discipline of designing and building toolchains and workflows that enable developer self-service,” Stewart explained. The purpose is to give the developers in your organization a set of standard tools that will allow them to do their job — write and fix apps — as quickly as possible. The platform provides the tools and services “that free up engineering time by reducing manual toil cognitive load,” Galloway added.

But platform engineering also has an advantage for the business itself, Galloway elaborated. With an internal developer platform in place, a business can scale up with “reliability, cost efficiency and security,” Galloway said.

Before HashiCorp, Galloway was an engineering manager at Netflix, and there he saw the benefits of platform engineering for both the dev and the business itself. “All teams were enabled to own the entire lifecycle from design to operation. This is really central to how Netflix was able to scale,” Galloway said. A platform engineering team created a set of services that made it possible for Netflix engineers to deliver code “without needing to be continuous delivery experts.”

The conversation also touched on the challenges of implementing platform engineering, and what metrics you should use to quantify its success.

“I think the community is playing a really big role right now, especially as a lot of organizations’ awareness of platform engineering is just starting,” Stewart said. “There’s a lot of knowledge that can be gained by building a platform that you don’t necessarily want to learn the hard way.”