How Popular is Docker? Depends on Who You Ask 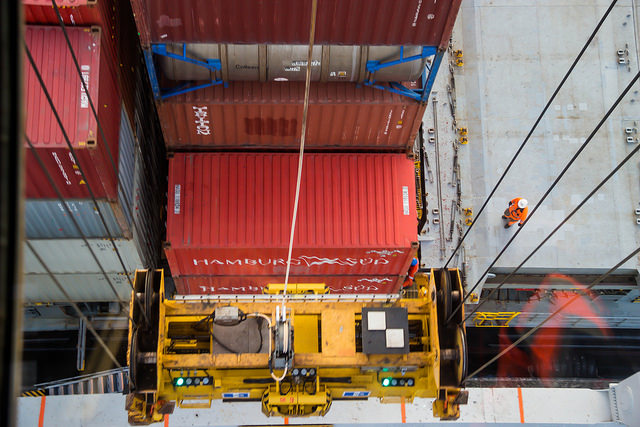 The use of Docker appears to be growing, though there’s debate about just how rapidly.

A survey from monitoring startup Datadog finds Docker adoption up by almost five times in the past year, while a Skytap report finds keen interest in the container technology, but fewer companies using it at this point.

Datadog draws on the data from a sample of 7,000 companies that use its cloud monitoring service. The report concedes that its customers “skew toward ‘early adopters’ and toward companies that take their software infrastructure seriously.”

Still, the report asserts that it “is probably the largest and most accurate review of Docker adoption that has been published to date.”

So with that in mind, the survey comes with a number of interesting findings:

“We’re seeing some hard facts that Docker is being adopted widely and quickly as well,” said Alex Rosemblat, Datadog director of marketing. “I don’t know that all the companies claiming to have Docker support can do it or do it well, but companies are using Docker and they’re using in a production status.”

That Docker is used to run new web-scale technologies such as NGINX, Redis and various databases wasn’t too surprising, he said, though the company did find it odd that the ubiquitous Apache web server didn’t crack the top 10 of the most widely contains apps. Rosemblat doesn’t have a theory about why this is the case, he said. 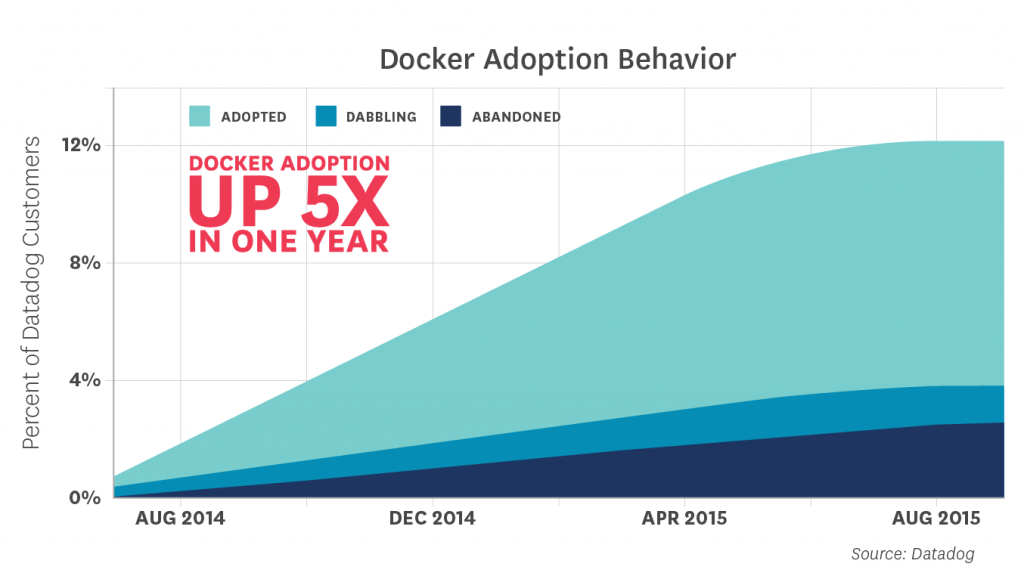 Docker adoption could bring some major changes to the market for infrastructure monitoring.

“Containers represent an order-of-magnitude increase in the number of things that need to be individually monitored,” the Datadog report asserted. “Monitoring solutions that are host-centric, rather than role-centric, quickly become unusable. We, thus, expect Docker to continue to drive the sea change in monitoring practices that the cloud began several years ago.”

Meanwhile, in the Skytap survey taken at VMworld in late August, of 206 respondents just 25 percent of them reported using containers now, but nearly half said their organization plans to adopt containers over the next 12 months.

“Two years ago, container technologies like Docker were largely considered to be the domain of Internet startups, and unusable for enterprise applications. Now 75 percent of these IT leaders are using or planning to deploy them. That’s a huge shift,” said Dan Jones, director of product management at Skytap, who characterizes containers as “just coming into the spotlight” as a DevOps tool for accelerating application delivery.

Skytap also unearthed other interesting usage patterns at VMworld. About 58 percent of respondents were more likely to look to IaaS solutions,  and 46 percent would look to continuous integration/delivery solutions to improve software delivery before trying containers.

When 451 Research asked roughly 1000 senior IT professionals about their familiarity and use of containers in a survey during the first quarter, 41 percent were at least somewhat familiar with containers, and 21 percent had already reached pilots or production use, roughly half of which were pilots.

And in a survey from StackEngine conducted in January found 70 percent of the 745 respondents were either using Docker or evaluating it. Forty percent were using it on a public cloud like AWS, and 34 percent on a private cloud such as OpenStack. It was used most heavily in QA/Test (63 percent) and Dev (53 percent), with 31 percent using it or planning to use it in production. Forty-seven percent said middle management was driving interest in Docker and 24 percent reported grassroots efforts.

And in New Relic data, 46 percent of the containers it tracked had a lifetime of less than one hour.

Rosemblat suggests that perhaps the market is changing faster than people can get a true measure of adoption.

True, there are stories about global financial services company ING using Docker to help accelerate its continuous delivery process and drive 500 deployments a week, and investment bank Goldman Sachs being so enamored with its internal experience with Docker that it invested in the company. Writing for The New Stack after DockerCon 2014, Chris Dawson noted the interest in Docker among the Fortune 500 set as well as startups.

But then there’s the possibility of confusion about how to define adoption. Analyst Chris Riley points to a fear among companies that if they don’t say they’re exploring Docker they’ll look like they’re falling behind.

“It is true that nearly every company I talk to these days is using Docker in some capacity and they ‘plan’ on using it more. But how they are using it is barely a toe in the water,” he said.

“Very few are using it beyond Dev/Test and sandboxing (three out of 30 interviews over the past six months). Even in Dev/Test the usage is small enough it can be handled developer by developer. It is still an isolated individual tool.

“At least for now, out-of-the-box Docker falls apart at scale. It is missing [much] of the management functionality required, and the third-party tools market is just too new. Things like private registries, security around provisioning, audit trails, discovery — just knowing what you have provisioned — change control, have to be addressed to make Docker a production tool and sustainable.”

Datadog, Docker, and VMware are sponsors of The New Stack.

Susan Hall is the Sponsor Editor for The New Stack. Her job is to help sponsors attain the widest readership possible for their contributed content. She has written for The New Stack since its early days, as well as sites...
Read more from Susan Hall
SHARE THIS STORY
RELATED STORIES
Docker versus Kubernetes: Start Here Deploy a Kubernetes Cluster on Ubuntu Server Using Containerd 3 Container Practices to Boost Your Security Posture Container Security: A Troubling Tale, but Hope on the Horizon Deploy a Container Stack in Portainer from a GitHub Repository
TNS owner Insight Partners is an investor in: The New Stack, Docker.
SHARE THIS STORY
RELATED STORIES
.NET 7 Simplifies Route from Code to Cloud for Developers How to Deploy Containers with nerdctl Deploy a Container Stack in Portainer from a GitHub Repository Can Observability Platforms Prevail over Legacy APM? Application Storage Is Complex. Can Automation Simplify It?
THE NEW STACK UPDATE A newsletter digest of the week’s most important stories & analyses.
The New stack does not sell your information or share it with unaffiliated third parties. By continuing, you agree to our Terms of Use and Privacy Policy.