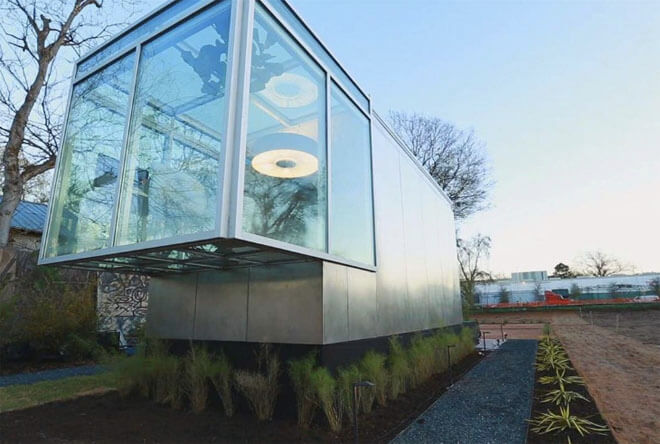 Most of us are familiar with the concept of “plug-and-play,” a feature that enables hardware, input and output devices to be automatically detected and configured as soon as it’s plugged into a computer. It was this added capability that helped to make personal computers much more accessible and convenient to use for the general public.

Now imagine the same plug-and-play concept being applied to housing. With rising urban populations and increasing densification, smaller homes and apartments may be the answer to easing the housing affordability crisis in many major cities, especially if ‘home’ is no longer dependent on a particular place or neighborhood, but is instead something that you can take with you to be ‘plugged in’ almost effortlessly elsewhere. Seen from another angle, one might see a similar zeitgeist of universality in container technology and the IT micro-services movement, with an emphasis on portability, modularity, scalability and platform agnosticism.

These are the same concepts behind Kasita, an Austin, Texas-based startup responsible for creating this prefabricated, 208-square-foot smart micro-home prototype that will form the basis of offering what it calls “housing-as-a-service.” Kasita is designed to be ultra-portable, capable of being transported on ordinary trucks, and placed in a backyard or inserted into a steel framework that can hold multiple Kasita units. These Kasita “racks” can be erected anywhere where there might be vacant urban land.

Intrigued? Well, take a video tour of one of these modern, mobile micro-housing units, courtesy of Fair Companies:

Kasita is the brainchild of Huston-Tillotson University professor Jeff Wilson. A few years ago, the professor and entrepreneur had all the trappings of a conventional life: a house and mortgage, a spouse and lots of stuff. A divorce, new job and a move later, Wilson is now probably best known for his one-year experiment in minimalist alternative living, which had him inhabiting a renovated a 33-square-foot Dumpster full-time while teaching. The idea was to create a solar-powered, energy-efficient tiny home that consumed only as much electricity as it produced, in addition to exploring the process of how downsizing one’s worldly possessions can actually add to one’s peace of mind and happiness, rather than detracting from it.

Kasita builds upon a lot of the lessons Wilson learned from the Dumpster project. For starters, Kasita’s flexibility takes some of its cues from traditional mobile homes, yet with a slight difference, says Wilson: “Think about an RV park. [Kasita is] a vertical way to do that: so you own your RV and you park it in a slot, this is a structure that these can go vertically.” 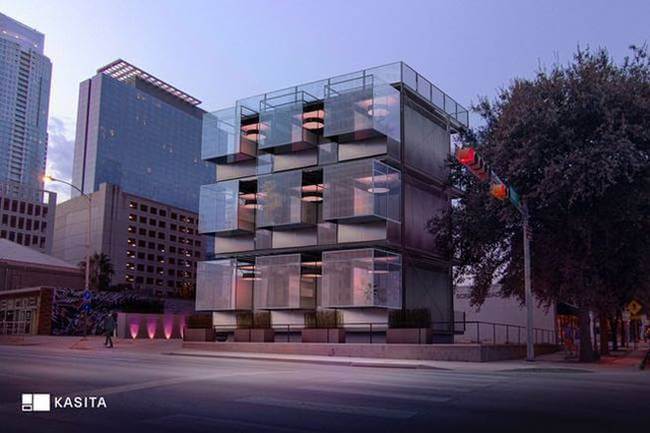 Of course, the minimalist interior of a Kasita looks less like an over-stuffed RV, and more like a well-designed, modern tiny home with clever space-saving strategies, like a bed that can be completely rolled and tucked away under a platform that supports the kitchenette, closets, washer and shower-equipped bathroom.

Every inch is utilized; the walls themselves are modularized with a system of interchangeable tiles designed for storage or shelving. There’s also an emphasis on integrated smart home technologies, which would allow a Kasita’s temperature, lighting and other functions to be controlled via a smartphone app. 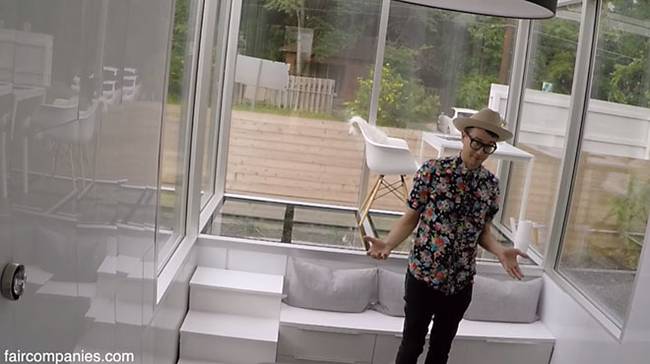 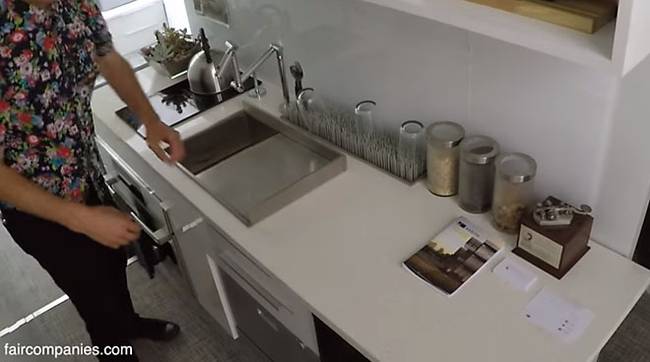 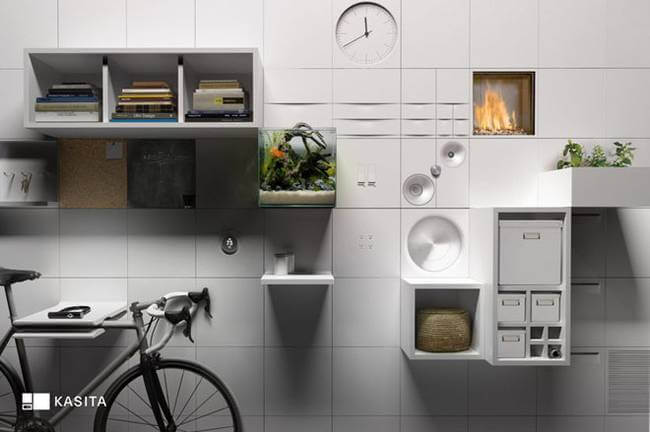 Beyond the built-in technology, Kasita’s overall plug-and-play appeal as a kind of containerized housing seems to be inspired by the intermodal aspects of shipping containers that have been converted into houses, without some of the structural and operational disadvantages.

“So folks aren’t going to be flying around all the time in their Kasitas, but in five years let’s say you want to move your Kasita, we can pull you out of that rack, put you on an 18-wheeler truck and move you to another rack or put it in a backyard,” explained Wilson in the video. “So you’re no longer bound to the land that you own your house on and we think that that’s the way that the world is moving.” 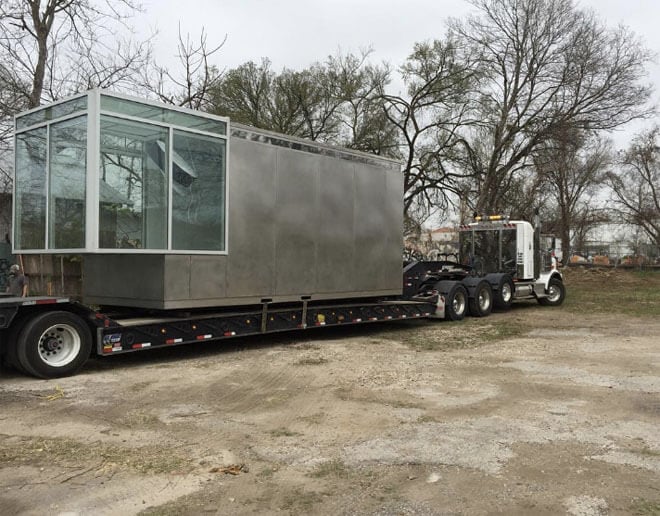 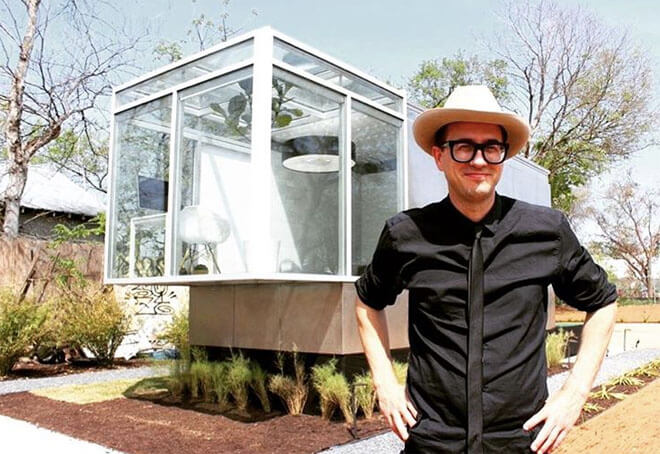 The Kasita concept also incorporates some of the philosophies that are driving an emerging tiny house movement, which advocates simple living, sharing resources whenever possible and alternative models to traditional home ownership, but without some of the legal headaches. As Wilson explained, Kasitas and their racks are designed to meet all the requirements of international building code, and can be zoned as multi-unit housing.

“The problem with tiny houses is the coding, the permitting and the land,” adds Wilson. “And the land’s the most difficult issue to solve because the folks who usually have the land are not the folks that need affordable housing. So our model allows the folks that have the land to highly monetize that land while providing home ownership to someone,” he said.

For all their technological and social innovation, perhaps the most attractive elements of these smart, modular micro-homes are that they will be a much more affordable option to either rent or buy compared to conventional homes since the cost-per-unit is driven down by mass prefabrication in local factories. And Kasitas may be coming soon to a city near you, as the company has already secured two vacant plots of land in Austin for the first iteration of Kasitas, with future plans to expand to cities like Portland, Seattle, Los Angeles and New York City.