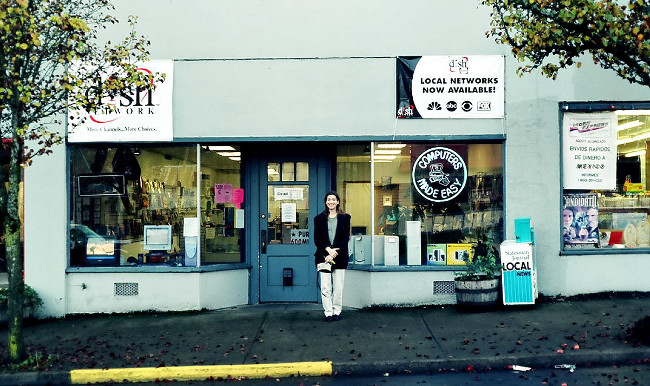 There’s nothing geeks admire more than good old-fashioned do-it-yourself “bootstrapping.” So Jeri Ellsworth, the Oregon woman who, among other things, has been home-brewing her own microchips, is a bit of a tech hero to us.

We found out about Ellsworth from an Ontario-based software developer who dedicated an entire blog post in October to the question of whether Ellsworth’s skills could past the ultimate test — surviving in the post-apocalyptic landscape after the great robot uprising of 2038.

“In a stuffed apartment filled with hydrofluoric acid, oscilloscopes and a transistor curve tracer, Jeri Ellsworth carefully places a hand-cut silicon wafer into a 1000 degree furnace,” Elder wrote. “The ambient noise of police sirens can be heard in the background…”

He admiringly profiles Ellsworth as humanity’s last best hope, evincing that inventor’s cool, that essential combination of patience and perseverance. “Jeri Ellsworth works solemnly on her p-doped silicon wafer, purchased from eBay, in an effort to make a simple silicon wafer transistor from first principles. Using store-bought rust remover for the source of acid, and Aquafina as a crude source of de-ionized rinse water.

“This is only the 100th try at making a functioning transistor for Jeri, and beside her on the desk lays a jar of full of failed attempts.”

It's tempting to stop the CNC mill and clear the chips, but they help build the anticipation. pic.twitter.com/Uwzlj9ktZ9

Wikipedia describes Jeri Ellsworth as “an American entrepreneur and an autodidact computer chip designer and inventor,” noting that she “gained fame in 2004 for creating a complete Commodore 64 system on a chip housed within a joystick, called C64 Direct-to-TV.” She later called the device “a tribute back to the computer that started it all for me,” in a 2004 profile in the New York Times which at the time described her as “a 30-year-old high school dropout and self-taught computer chip designer” who was reverse-engineering old computers to recreate them using customized modern chips.

“I’m an inventor,” she boasts on her personal website. “It feels amazing when products I’ve worked on hit the market… The joystick immediately sold 70,000 units the day it was featured on QVC’s shopping channel — but more importantly, Ellsworth had told the Times, “I’m having fun.”

Ellsworth was raised by a mechanic in a small rural town, according to the Times, scrounging parts from her local ham radio operators. When she was 9, she asked her parents for a soldering iron, then jerry-rigged one of her own. She told one audience about her youthful dumpster diving for circuit boards, and eventually, her father even bought her an electronics kit from Radio Shack with an earpiece that actually made it possible to listen to them.

And one thing soon led to another. Growing up she became an enthusiast of dirt-track race cars, then began designing and selling them from her father’s garage — a business so lucrative she eventually dropped out of high school.

But she’d soon moved on to building that remarkable device that the Times described as a “chameleon” computer which could actually mimic more than 10 classic computers, including the Commodore 64 and the Atari. The Times marveled at her home-based circuit design lab in “a ramshackle farmhouse in rural Oregon” and described her as demonstrating “that the spirit that once led from Silicon Valley garages to companies like Hewlett-Packard and Apple Computer can still thrive.” Even Steve Wozniak said he was “impressed with her knowledge.”

Ellsworth’s amazing feat brought her fame (and job offers), with one employer noting that she has something that’s often missing in people with advanced engineering degrees. “It’s possible to get a credential and not have passion.” She spent seven successful years as a computer chip consultant, and in the spring of 2009 she was even co-hosting a podcast called “Fatman and Circuit Girl”

In fact, her videos have racked up a total of nearly 14 million views on YouTube, which describes them as “amateur science experiments.”

I need more fire in my presentations. pic.twitter.com/0yMbkHlneJ

A  job at Valve led her to co-founding an augmented reality startup in 2013, first raising over $1 million on Kickstarter, and then $15 million in VC funding from Playground Global, the fund started by Android creator Andy Rubin. Engadget calls Ellsworth an “all-around hardware guru,” noting she owns over 80 pinball machines.

“Every few years I pick up a new hobby,” Jeri writes on her website, adding “Some are less technical than others.”

Elder’s essay offers a fresh perspective on Ellsworth’s work, admiringly citing her involvement in “a large number of technologies that would be most useful in a post-apocalyptic, cyborg infested, highly irradiated, landscape with no functional power grid.” And he claims satirically that Ellsworth’s whole life “has actually been one long covert training exercise to prepare her to lead the next generation of resistance fighters who will wage war against the robot armies of the future.”

“’Hi guys, thought I would show you my electron microscope,’ said Jeri as though she wasn’t secretly planning to use it to reverse-engineer the CPU of a captured futuristic cybernetic organism from a well-planned raid on a remote outpost,” he wrote.

But even so, sometimes you began to wonder if it’s not really a guide to surviving the robot uprising so much as it is a statement of admiration. (Despite its references to “nomadic groups of surviving humans…”)

I had to discover the story behind the story, so I reached out to Ellsworth’s Canadian super-fan. It was an elaborate tribute — but what was behind it all? “I think the first time I ever heard of Jeri was when after I purchased a piece of magnetic core memory (pictured in the article) and I was doing some research to try and learn how I would actually read/write to it,” Elder remembered. “Of course I searched on YouTube and found this video by Jeri which I thought was pretty useful,” he told me.

“Then, on a completely different day, I was wondering if it would be possible to create home-made integrated circuits with silicon wafers in your home. I know that the process involves a lot of harsh chemicals and expensive equipment, but I search on YouTube anyway — and found Jeri’s video.”

So by day, Elder’s a diligent software developer. “I have my own (one-person) consulting/contracting business which is my full-time job.” But in the course of his day-to-day projects, he’d started to stumble across Ellsworth’s videos more and more. “The thing that stood out to me was how unique and informative her videos were,” he wrote, adding “the actual information from them is much more unique than anything else you find on YouTube… I suppose I have an admiration for autodidacticism, and that’s what comes through in a lot of Jeri’s work.”

There’s another reason Ellsworth’s videos resonated so deeply with him: what Elder describes as “an appreciation for minimalism and the ability to build whatever you want out of very constrained resources.” Jeri’s magnetic loop antenna project is one example. In fact, Elder himself is working on his own exercise in minimalism — a C compiler written in ANSI c89 , “one of the few languages that is ubiquitously supported even in very old systems.”

I’d reached out to Ellsworth myself, just to see what she thought of all the attention. But while I never heard back, her web page tells you all you need to know. When you click the “submit” button on her contact page, it takes you to another page which says

SHARE THIS STORY
RELATED STORIES
Tackling 3 Misconceptions to Mitigate Employee Burnout Entrepreneurship for Engineers: Painkiller or Vitamin?  Case Study: How Dell Technologies Is Building a DevRel Team It's No Longer about How You Write Code but How You Operate It Collaborating with Internal Dev Experience and Tool Teams
SHARE THIS STORY
RELATED STORIES
How Security Champions Can Change Your Culture SANS Survey Shows DevSecOps Is Shifting Left  Low-Code Tools Improve Devs' Work-Life Balance, Survey Finds Slack: How Smart Companies Make the Most of Their Internships The Graph of Life in a Post-Relational World
THE NEW STACK UPDATE A newsletter digest of the week’s most important stories & analyses.
The New stack does not sell your information or share it with unaffiliated third parties. By continuing, you agree to our Terms of Use and Privacy Policy.