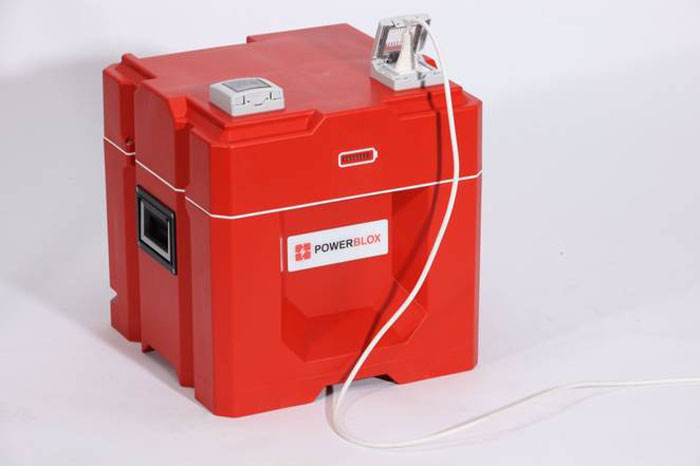 The underlying principles behind distributed systems are not only changing the way we compute, it’s also prompting us to rethink how many of the fundamental systems of our lives are designed.

Take energy generation, for example: if you’re like most people, you’re probably connected to a centralized power grid that uses a lot of big, inefficient infrastructure that’s expensive to maintain. But these characteristics aren’t the biggest problem: due to the way it is configured, centralized systems have a single main point of control that makes it highly susceptible to large-scale failure.

Thankfully, there are better alternatives. We’re seeing a number of startups around the world address this problem with innovative solutions, and Swiss company Power-Blox is yet another, offering a “swarm power” technology that would enable users to create their own fully autonomous, intelligent micro-power grids, set up as a distributed system, and capable of scaling up as needed. Watch Power-Blox co-founder Armand Martin explain the concept:

Power-Blox is conceived as a “universal energy interface” that oversees power generation, storage and distribution of power from a variety of energy sources, which could come from a combination of solar, wind, hydrothermal, biomass, or a generator. Individual Power-Blox could be stacked up into larger “Power Walls” to direct electricity not only to homes, but also to schools, hospitals, infrastructure, or even whole towns in remote places, creating decentralized, distributed micro-grids.

One major advantage of such a distributed system would be that it would be resilient to disruptions and much simpler to upgrade. When one point in the network fails, the system as a whole can still function. When demand for power increases, instead of having to swap out the whole system to upgrade it, users can just add another module and more energy sources. This flexibility would make Power-Blox a convenient and cost-effective alternative for communities in developing nations, where power grids might be unreliable or non-existent.

Another big asset is the system’s built-in artificial intelligence algorithms which form a kind of “swarm intelligence,” which gives it the ability to adapt automatically to fluctuating electrical loads and an ever-changing roster of power sources. Available energy in the swarm is stored in its nodes, and each component within the system is able to regulate itself, adapting to the current state of the overall grid, thanks to this relatively simple set of software code.

Power-Blox’s swarm intelligence feature is apparently inspired by nature itself, and it’s this swarm concept that makes Power-Blox system autonomous, user-friendly and scalable. By keeping the fundamentals simple, more complex configurations are possible.

“Swarm technology is based upon nature’s approach towards organizing complex structures in a fully decentralized way,” says the company. “In a swarm, the most complex systems are governed by a simple set of rules and that are acted upon without the need for centralized decision making. As the individual entities within the swarm follow this set of rules they interact with one another without knowledge of the swarm’s behavior, giving rise to an ‘intelligent’ global behavior for the entire system.”

The single Power-Blox module comes in the 200 Series, capable of producing up to 200 watts of alternating current, sufficient for powering things like lights, one refrigerator, one television and for charging cellphones and laptops. Power can be stored in the unit’s integrated 1.2 kilowatt-hour battery. It’s like a “portable socket”, but its modular design means that single units can be combined like LEGO to create a higher-capacity, off-grid system for greater demands. Power-Blox operates on a “plug-and-power” principle, meaning that no special skills are needed to get the system up and running. 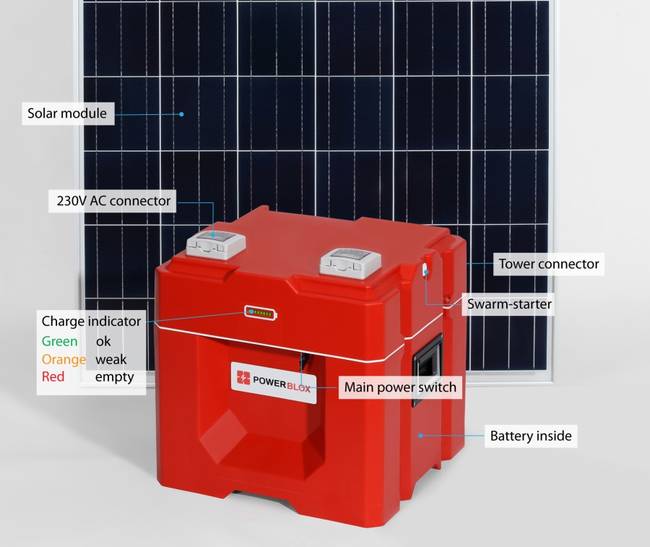 Which brings us back to the potential for “swarm power” to make a huge difference in the lives of the 1.2 billion people — 16 percent of the global population — who do not have access to electricity and who live in places where building a centralized grid does not make economic sense.

“[What] swarm connectivity means is truly fascinating: it means that electricity can be scaled easily,” said Martin in his TEDx talk. “It also means that anybody on the planet could have electrical energy available. But more important, it would make power more democratic because it would remove it from the dependence on large companies and unstable governments.”

But swarm intelligence doesn’t have to be confined to power grids. These principles of self-organization and decentralization can be applied to almost anything.

“What we see today is just the beginning,” said Martin. “The future digital information age will be so complex that the centralized paradigm is no longer a valid approach for many of our challenges. Swarm algorithms may be used for autonomous driving, for less traffic jams and more safety. There may be swarm markets where anybody could consume or provide microservices or even a far-reaching idea, what about swarm money? This would be a form of money which could not be centrally controlled, its value automatically determined by supply and demand, and where no central bank would be possible or needed.”

The power and potential of swarm intelligence are indeed impressive to behold, and it will be fascinating to see if these provocative predictions do play out.

SHARE THIS STORY
RELATED STORIES
The Top 4 Threats to Securing Your Cloud Infrastructure Kubernetes Needs to Take a Lesson from Portainer on Ease-of-Use Why CIEM Plays a Key Role in Your Cloud Security Strategy Kubernetes App Deployment from the Command Line How Capital One Performs Chaos Engineering in Production
SHARE THIS STORY
RELATED STORIES
What Trouble Awaits Cloud Native Security in 2023? Entrepreneurship for Engineers: Building for Customers’ Love Prometheus at 10: What's Been Its Impact on Observability? Platform Engineering Won’t Kill the DevOps Star Crossplane: What Most People Get Wrong (and How to Get It Right)
THE NEW STACK UPDATE A newsletter digest of the week’s most important stories & analyses.
The New stack does not sell your information or share it with unaffiliated third parties. By continuing, you agree to our Terms of Use and Privacy Policy.