WTF: Probing the Galaxy’s Most Mysterious Star with Kickstarter 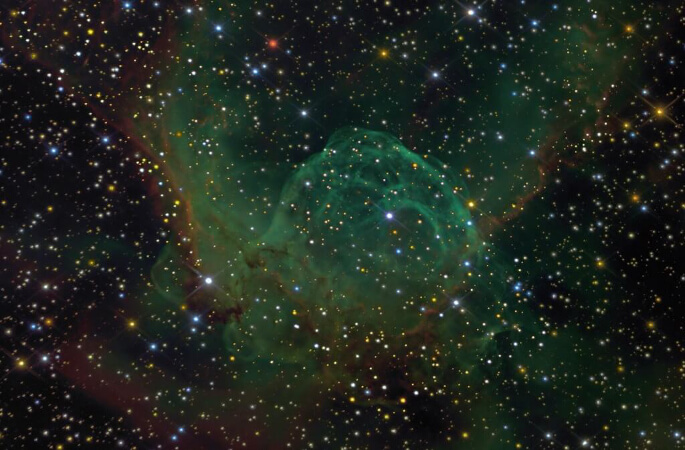 KIC 8462852 is one of 150,000 stars observed by NASA’s Kepler telescope — which does nothing but monitor the brightness of stars, transmitting the data to earth in the hopes of discovering a flicker which indicates a planet orbiting a star.

KIC 8462852 is a big star: It’s 50 percent larger than our sun. Even Jupiter would only cover about 7 percent of its surface. What makes this giant star so unusual is the periodic massive drops in this star’s light, as captured by Kepler — for periods as long as ten days.

Was the light being blocked by enormous planets? Dust clouds? Or maybe an even bigger star? Whatever it was, it appeared to be orbiting closely — but without ever heating up. Or at least, it’s not emitting the tell-tale infrared light that you’d expect from a hot object so close to a massive star.

One astronomer points out that it’s also known as the WTF star —  which stands for “Where’s the Flux?”

The best guess to date seemed to be “a swarm of comets” —  at least until an alternate theory was proposed: alien megastructures were blocking out the light.

That theory, proposed by Paul Carr, attracted the media’s interest. One astronomer still jokes that his favorite description of the debate is “alien zombie comets not alien architecture!”

“Honestly, none of these are good explanations to what is happening, which is why it’s been dubbed ‘the most mysterious star in our galaxy,'” said Tabetha Boyajian, the Yale-based astronomer who served as the lead author on a paper describing the phenomenon, in a video. “This is hands-down one of the biggest mysteries of all time. What kind of crazy but very cool hypothesis will be the right one?”

She’s turning to Kickstarter to find out.

“With your help, we can secure the telescope time necessary to solve the mystery.”

Open The most mysterious star in the universe | Tabetha Boyajian on YouTube.

The plan is to point a network of powerful earth-based telescopes at this star of mystery, so they’ll be sure to be watching the next time it’s energy dips, and be ready to measure several different wavelengths of light, which should help figure out what’s doing the blocking. Of course, the unpredictable fluxes don’t follow a schedule, so this project requires time and patience.

“The Kepler space telescope observed this star continuously for four years, and only for about five percent of this time was the star ‘dipping’… the possibility remains that over the course of the observing campaign the star will do nothing exciting,” Boyajian wrote.

And unfortunately, government-funded telescopes are always overbooked, and couldn’t provide this kind of continuous monitoring, according to their Kickstarter page, while private telescopes usually require a grant from NASA or the National Science Foundation, “usually ‘safe’ ones with certain and immediate returns.” They reject at least 85 percent of the proposals they receive, according to the Kickstarter page. “A project such as this one that needs lots of telescope time to observe something with an unknown chance of occurring is very unlikely to be funded by these traditional sources,” the website states. “That’s why we’re turning to crowdfunding.”

The telescopes observe the star at key points throughout the night, for a total of two hours each night. The team has already been “gifted” 200 hours by a global network of telescopes, which will keep the project going until the end of this summer. But if their Kickstarter campaign gets funded, they can continue through the summer of 2017. While they won’t prove or disprove the “alien megastructure” theory, “Exploring the mysteries of space is exciting — and we invite you to to come along for the ride and experience it with us!”

The team needs to raise $100,000 in less than a month though after their first day they’d already raised $8,266 from 119 backers. If you pledge $25 or more, you can vote on the name for the next dip in energy that the team discovers. And if you pledge $5,000 or more, you get to submit one of the voted-on names. If you pledge over a thousand dollars, the team promises to mention you in any scientific papers they publish during the crowdsourcing.

“Help astronomers get the data they need to unravel one of the biggest mysteries of all time, KIC 8462852  — Where’s the Flux…?” urges the campaign’s web page, adding one final and irrefutable piece of logic: “If we don’t look, we will never know!”