PromCon 2022: Why Prometheus Had to Change

As Prometheus’ celebrates its 10-year anniversary, its users are also becoming smarter about what they want and need.
Jan 3rd, 2023 3:00am by B. Cameron Gain 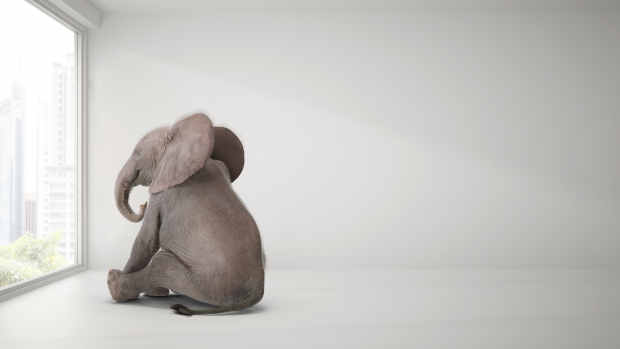 Prometheus continues to remain as an essential tool for monitoring, and especially, as a key component in observability platforms for cloud native environment. As one of the Cloud Native Computing Foundation’s (CNCF) “fastest-growing” projects, the time series database is especially useful for gathering metrics for Kubernetes clusters and is typically used with Grafana dashboards as an observability tool for visualizations.

Prometheus metrics, and observability data in general, have become increasingly essential for many often over-extended and highly distributed DevOps teams in today’s pandemic context, especially those working in development environments.

Prometheus’ installations are now in the hundreds of thousands range with millions of users, Richard (RichiH) Hartmann, director of community at Grafana Labs and a CNCF Technical Advisory Group Observability chair, said during his talk “I don’t have to convince this room that Prometheus is a de facto standard in cloud native metric based monitoring.”

But as Prometheus’ maintainers celebrate its 10-year anniversary, the community’s needs for monitoring Kubernetes are evolving quickly. Users are also becoming smarter about what they want and need. PromCon EU 2022, held in Munich in November, the Prometheus annual user’s conference, served as a forum about how and why Prometheus must evolve and what Prometheus maintainers must do.

Kubernetes is certainly hard. Monitoring and observability metrics certainly can help to tame Kubernetes management. But using tools to do that and interpreting often massive amounts of data pose obvious challenges.

In Prometheus’ case, even as it gained in popularity since former Google engineers originally released and created Prometheus at SoundCloud in 2012, it was seen as being difficult to use by many (which Grafana has helped a lot with as we see below). Usability has thus been a major pain point that Prometheus users have sought to solve during its 10 years of existence among other challenges the project has faced, Hartmann told The New Stack.

“Prometheus used to have a connotation of being hard to use,” Hartmann said. “Looking at it today, it’s a lot easier to derive value quickly.”

Much of Prometheus’ is thanks to its logical and arithmetic operators that with the PromQL query functions serve large-scale data requirements. “The fundamental problem Prometheus has solved is that for the first time, it has allowed you to do math with your monitoring data in a truly flexible and scalable way,” Hartmann said. “The industry at large will never be the same because people saw what can be done.”

Prometheus is also known to accommodate scaling needs, which is obviously required for drawing inferences from metrics in Kubernetes environments. “We now support a scale which was unheard of other than with Hyperscalers,” Hartmann said. “No one anticipated us being able to handle as much data 10 years ago. It’s been leaps and bounds.”

The talks given during PromCon covered new capabilities users can take advantage of, intended to make observability more accessible and powerful during the coming years. In other words, the talks given did not just offer a list of incremental new features and capabilities for what has become the de facto monitoring tool for Kubernetes.

Let’s start with some basics: #histograms is the distribution of all your observations in specified time ranges, called them buckets, as Ganesh Vernekar begins his @PromConIO talk this week. More cool stuff to come about @PrometheusIO. @_codesome @grafana pic.twitter.com/kgKHEhuQlb

Histograms in Prometheus have had their drawbacks and Grafana senior software engineer Ganesh Vernekar’s on histograms represent one of the more important conference talks. Histograms in Prometheus have worked reliably for years, but they have had a few downsides when it came to storage efficiency, the accuracy of histogram queries and flexibility in using histograms, Vernekar described. The good news that Vernekar announced during his talk is that Prometheus v2.40.0  now supports native histograms, which represents a fairly significant development. 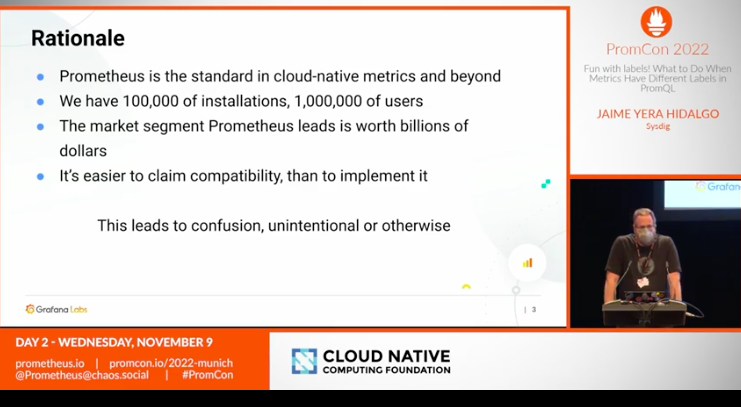 During the past year, the testing process and other support the conformance program offers has matured, making it much easier for organizations to ensure they have done the proper due diligence. “At the core, it is really, really easy to say you’re compatible. It’s a lot harder to actually be compatible, in particular, when it comes down to the nitty-gritty details of how a specific function behaves,” Hartmann said. “It’s hard for people to figure this out on their own.”

In a nuanced way, Hartmann described how claims of compatibility that are untested can cause “confusion,” sometimes done “deliberately, sometimes, not deliberately,” which is “why we felt forced to go down this path,” Hartmann said. As a countermeasure, Hartmann described how the conformance project offers a  set of tests that can be run to test a Prometheus implementation in a cloud environment.

Elephant in the Room

“Grafana and Prometheus have co-evolved. Grafana the software adapted more to Prometheus than vice versa,” Hartmann said. “But a substantial amount of work on Prometheus is being paid for by Grafana Labs. Almost symbiotic, though not everyone will like that word.”

BC Gain’s obsession with computers began when he hacked a Space Invaders console to play all day for 25 cents at the local video arcade in the early 1980s. He then started writing code for very elementary games on the...
Read more from B. Cameron Gain
SHARE THIS STORY
RELATED STORIES
Why a DataOps Team Needs a Database Reliability Engineer Data, Analytics and AI: What Will Happen in 2023 Hazelcast and the Benefits of Real-Time Data When ‘Cron Jobs’ Won't Work in Your Favor AgStack: Linux Foundation Project Will Bring Farms Online
TNS owner Insight Partners is an investor in: The New Stack.
SHARE THIS STORY
RELATED STORIES
Canva’s Live Database Migration: From MySQL to DynamoDB Cutting Database Costs: Comcast, Rakuten, Expedia and iFood How to Use Time-Stamped Data to Reduce Network Downtime  The Architect’s Guide to Data and File Formats  Taking Data Curation to a New Level
THE NEW STACK UPDATE A newsletter digest of the week’s most important stories & analyses.
The New stack does not sell your information or share it with unaffiliated third parties. By continuing, you agree to our Terms of Use and Privacy Policy.