Pulumi's Matty Stratton talks about the recently universal Infrastructure-as-Code and that impact on both dev and ops teams.
Jun 22nd, 2022 12:28pm by Jennifer Riggins 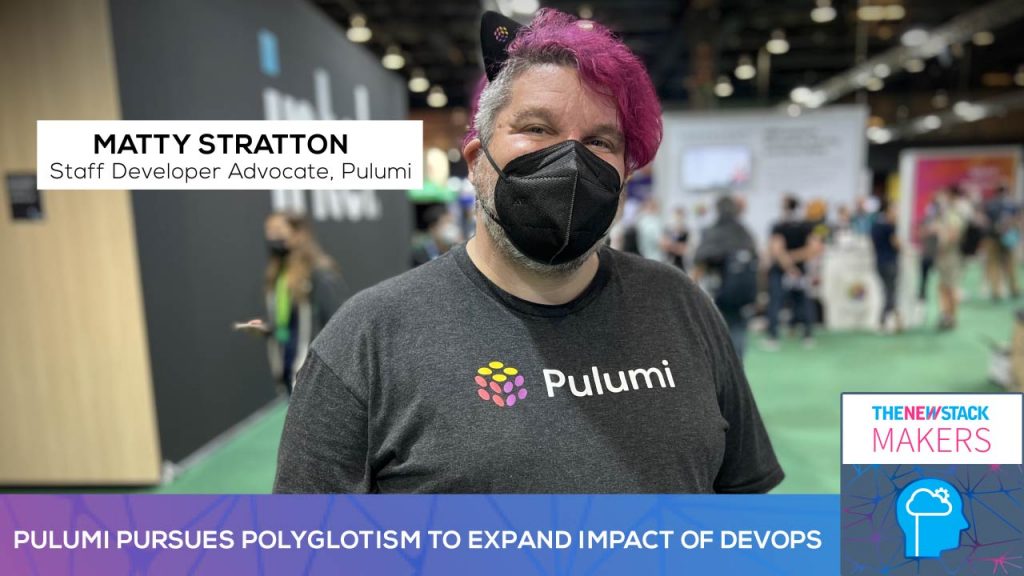 VALENCIA – The goal of DevOps was to break down silos between software development and operations. The side effect has become the blurring of lines between developers and operations. For better or for worse. Because the role of software developer is just continuously expanding causing cognitive overload and burnout. This is why the developer tooling market has exploded to automate and assist developers right when and where they need to build, in whatever language they already know.

In this episode of The New Stack Makers podcast, recorded on the floor of KubeCon + CloudNativeCon Europe 2022 last month, Matty Stratton, staff developer advocate at Infrastructure-as-Code (IaC) tools provider Pulumi, talks about how IaC could impact dev and ops teams.

In May, Pulumi released updates that took the platform closer to becoming a truly polyglot way to enforce best cloud practices, including support for:

These are significant updates because they dramatically expand the languages that can be used to create, deploy and manage infrastructure on any cloud.

“The great thing about that is, not only do you maybe already know this programming language, because that’s the language you use to build your applications, but you’re able to use all the things that a programming language has available to it, like conditionals, and loops, and packages, and testing tools, and an IDE [integrated development environment] and a whole ecosystem,” Stratton said.

“So that makes it a lot more powerful, and gives us a lot of great abstractions we can use.”

Jennifer Riggins is a culture side of tech storyteller, journalist, writer, and event and podcast host, helping to share the stories where culture and technology collide and to translate the impact of the tech we are building. She has been...
Read more from Jennifer Riggins
SHARE THIS STORY
RELATED STORIES
What TNS Readers Want in 2023: More DevOps, API Coverage Prometheus at 10: What's Been Its Impact on Observability? Kubernetes Needs to Take a Lesson from Portainer on Ease-of-Use Why CIEM Plays a Key Role in Your Cloud Security Strategy MicroK8s and Portainer Is The Easiest Way to Deploy an Application on Kubernetes
TNS owner Insight Partners is an investor in: The New Stack.
SHARE THIS STORY
RELATED STORIES
Data, Analytics and AI: What Will Happen in 2023 Crossplane: What Most People Get Wrong (and How to Get It Right) 5 Best Practices for DevSecOps Teams to Ensure Compliance Agent-Based vs. Agentless Security: Which Approach Is Better? Choosing the Right Container Native Storage for AWS Public Cloud
THE NEW STACK UPDATE A newsletter digest of the week’s most important stories & analyses.
The New stack does not sell your information or share it with unaffiliated third parties. By continuing, you agree to our Terms of Use and Privacy Policy.